Tinea versicolor. Multiple well-marginated hypopigmented round to oval macules, with fine dust-like scaling, on the back 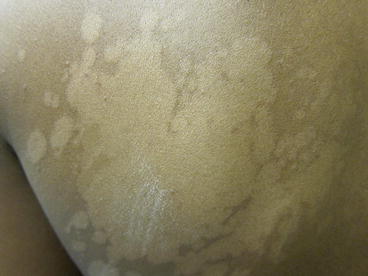 Tinea versicolor. Close up. Hypopigmented macules on the back have coalesced to larger patches with inducible scale (with #15 blade)

Diagnosis is typically based on clinical exam. The ultraviolet black light (Wood’s light) may be supportive, revealing coppery-orange fluorescence. The diagnosis can be confirmed by in-office potassium hydroxide (KOH) preparation, which demonstrates the classic “spaghetti and meatballs” of short, cigar butt hyphae and spores.
Diseases of pigmentation common among people with skin of color can also include vitiligo, pityriasis alba, pityriasis rosea, seborrheic dermatitis, erythasma, and hypopigmented mycosis fungoides, which may be considered in the differential diagnoses.

Although biopsy is not usually performed, histologic findings of the hypopigmented macules would show slight hyperkeratosis and acanthosis, minimal inflammatory infiltrate, and most notably positive Periodic acid-Schiff (PAS) stain revealing hyphae or yeast forms in the straum corneum.

The diagnosis of tinea versicolor was discussed with the patient. Even though the patient was asymptomatic, the presence of the rash caused emotional distress due to the clinical appearance and the patient opted for treatment. Since secondary postinflmmatory pigmentary changes is common in people of color, a more aggressive treatment regimen was chosen. Econazole 1 % cream once daily × 4 weeks was prescribed. It was explained to the patient that reoccurrence of tinea versicolor was very common. Prophylactic therapy including weekly application of ketoconazole 2 % shampoo as a body wash for 3 months following treatment and during warmer months was recommended to help prevent recurrence.

Diagnosing tinea versicolor in patients with skin of color may pose challenges, including unique cultural implications and differing clinical presentations. Tinea versicolor has been shown to be especially common in dark-skinned individuals. If untreated, tinea versicolor could last for years.
In the United States from 1990 to 1999, tinea versicolor was diagnosed in 110 office visits per 100,000 population per year on average. However, people with skin of color accounted for higher frequencies than average, with 140 visits for black patients, 150 visits for Native Americans/Eskimos, and 40 visits for Asians/Pacific Islanders, respectively; while Caucasians accounted for 110 visits per 100,000 per year (Mellen et al. 2004). Similarly, a study conducted in southeastern London demonstrated that tinea veriscolor was statistically more common in those of darker skin, with 48 % of tinea versicolor diagnoses in the study in blacks versus 35 % in whites and 17 % in other races, including those of Asian and Arabic origin (Child et al. 1999). The reasons for these frequencies may vary; dark-skinned individuals may be more prone to infection by tinea versicolor or have greater health care utilization due to more concern about the dyspigmentation.
No differences in the causative species of tinea versicolor between dark-skinned or light-skinned patients have been identified. Tinea versicolor is caused by the dimorphic, lipophilic organism of the Malassezia spp. (formerly known as Pityrosporum). The two most common species in tinea versicolor are M globosa and M furfur. The main predisposing factors of tinea versicolor involve having fatty acids on the skin, such as in adolescence where sex hormones increase leading to skin lipid production. Additional contributing factors include corticosteroid administration, application of oily preparations, exposure to sunlight, warm and humid climates, genetic predisposition, malnutrition, immunosuppression, and hyperhidrosis. Since humidity (which contributes to hyperhidrosis) and sunlight are key factors, populations living in tropical regions are most affected by tinea versicolor.
Dark-skinned individuals with tinea versicolor or those that have tanned are likely to present with secondary dyspigmentation. There is controversy on whether hypopigmentation versus hyperpigmentation are truly more common among people with skin of color. Several studies have shown that hypopigmentation is more common among patients with tinea versicolor in India, with 81.8 % hypopigmentation among patients in Kolkata, India (Ghosh et al. 2008). A study in Brazil demonstrated that most of the subjects of the mulatto race (brown skin) showed a higher frequency of hypopigmentation (Morais et al., 2010). However, according to a study on patients of Fitzpatrick skin types IV and V in Saudi Arabia, only 55 % of patients presented with only hypopigmentation as well as 33 % with only hyperpigmentation, which was concluded as not being statistically significant (Aljabre et al. 2001). The differences in climate between Saudi Arabia and India may have led to these opposing results, as hyperhidrosis is more associated with hyperpigmentation.
Only gold members can continue reading. Log In or Register to continue