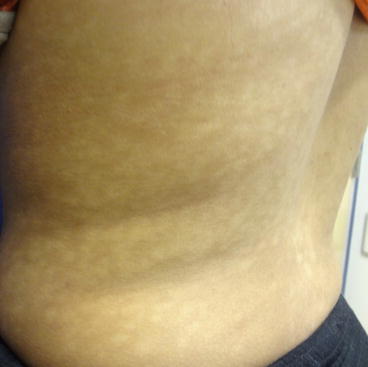 On examination, multiple ill-defined, non-scaly hypopigmented macules were seen on the back, flanks, and chest. Lesions coalesced into patches over the midline back. Wood’s lamp examination revealed red perifollicular fluorescence. Skin scrapings on potassium hydroxide (KOH) microscopic examination did not show evidence of spores or hyphae.

The hypopigmentation was felt to be most consistent with progressive macular hypomelanosis (PMH). This disorder is often mistaken for other common conditions seen in darkly pigmented patients, e.g. tinea versicolor, pityriasis alba, vitiligo, and post-inflammatory hypopigmentation. PMH can be distinguished from tinea versicolor and pityriasis alba by its non-pruritic nature and failure to respond to anti-fungal or anti-inflammatory therapy, respectively. In addition, tinea versicolor can often be confirmed by microscopic examination with KOH that will show evidence of fungus. Vitiligo appears depigmented and will illuminate under Wood’s lamp examination. Patients with post-inflammatory hypopigmentation will give a history of a primary skin eruption and a shorter clinical course. Infectious processes and cutaneous lymphoma should be considered in select populations. Rarer infectious etiologies of hypopigmentation should be especially considered if the patient is from an endemic area of leprosy, leishmaniasis, and/or pinta. If asymmetric, atrophic hypopigmented macules and patches with fine scales on the trunk, chest, and sun-protected areas are seen, one should consider the diagnosis of hypopigmented mycosis fungoides (Relyveld et al. 2007; Elmariah and Kundu 2011).

Two biopsies were performed from lesional and non-lesional skin on a follow up visit due to minimal response to initial treatment. The biopsy results were non-diagnostic which is often the case in PMH. Skin biopsy of the affected area revealed a normal number of melanocytes with reduced content of epidermal melanin when compared to unaffected skin. The dermis appeared normal. PAS stain was negative for fungal organisms.

The nature of the diagnosis, disease course, and treatment expectations were discussed. The patient was prescribed benzoyl peroxide 5 % wash twice daily with clindamycin lotion 1 % twice daily. The patient had minimal response to this treatment and agreed to a biopsy as above. After exclusion of other entities, treatment was further optimized with narrow-band ultraviolet B (NBUVB) three times weekly in adjunct to topical antimicrobials.

Progressive macular hypomelanosis is a common yet under-diagnosed skin disorder. Authors worldwide have used several names to describe this entity including cutis trunci variata, dyschromia creole, progressive and confluent hypomelanosis of the melanodermic metis, nummular and confluent hypomelanosis, progressive macular confluent hypomelanosis, and idiopathic multiple large macule hypomelanosis (Elmariah and Kundu 2011; Westerhof et al. 2004). Although there are recent reports of PMH in individuals of lighter skin types, this condition continues to be more prevalent in patients with more richly pigmented skin (Relyveld et al. 2007; Westerhof et al. 2004). PMH is characterized by multiple ill-defined round to oval, non-scaly hypopigmented macules and patches that occur on the trunk and that occasionally extend to the neck, face, and proximal extremities. Lesions are asymptomatic with no prior history of inflammation. PMH typically affects young adults, with a female predominance. The clinical course is variable, usually starting in adolescence. It may resolve spontaneously, within 2–5 years, or slowly progress over time (Relyveld et al. 2007; Elmariah and Kundu 2011).
The pathogenesis of PMH is not fully understood. Recently, Westholf et al. proposed a novel hypothesis based on the finding of red fluorescence under Wood’s light examination in affected skin as opposed to normal skin which showed no fluorescence. Authors have attributed this red follicular fluorescence to porphyrin production. In the original studies, cultures from lesional skin but not from unaffected skin isolated Propionibacterium acnes (P. acnes), leading to the thought that P. acnes produces a depigmenting agent that interferes with melanin production, resulting in the hypopigmented macules observed clinically. Additional investigation, performed by the same group of investigators in 2010, demonstrated that the Propionibacterium bacteria found in PMH may be a different species than that found in acne patients (Relyveld et al. 2007; Westerhof et al. 2004; Relyveld et al. 2010). This is supported by observations that patients with acne are not at increased risk for the development of PMH and vice versa.
Only gold members can continue reading. Log In or Register to continue