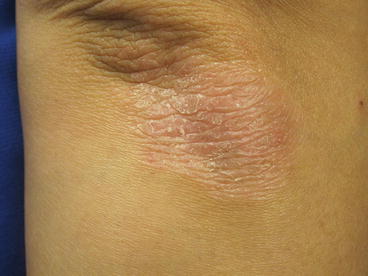 Plaque psoriasis. Close up of a well-demarcated erythematous scaly plaque with micaceous scale on the right elbow

The characteristic presentation is most consistent with psoriasis. However, other diagnostic possibilities include seborrheic dermatitis, eczema, lichen planus, and lichen simplex chronicus (Alexis and Blackcloud 2014). Seborrheic dermatitis is localized to the scalp and sometimes face. Eczema is characterized by pruritic patches and plaquess with fine scaling. Lichen planus presents with localized or widespread flat-topped violaceous to hyperpigmented papules with white lines running through them (Wickham’s striae). The most common locations for lichen planus are the wrists, lower back, and ankles. Lichen simplex chronicus is the consequence of chronic localized irritation that leads to skin thickening and a leather-like plaque. The location of scaling over extensor surfaces and micaceous scale make these diagnoses less likely.

Psoriasis is often a clinical diagnosis but biopsy may be performed to confirm in less common presentations. The microscopic changes of psoriasis include regular acanthosis, parakeratosis, loss of the granular cell layer. Dermal edema, dilation of vessels of the papillary dermis and perivascular infiltration of lymphocytes and dendritic cells can be seen (Ragaz and Ackerman 1979). Neutrophilic microabscesses can aggregate in the epidermis (Munro microabscesses). Dilation of vessels helps further migration of immune cells into the affected areas of skin (Bowcock and Krueger 2005; Schon and Boehncke 2005).

The clinical diagnosis of psoriasis was discussed, including the characteristic locations on the scalp and extensor surfaces. The potential for nail and joint involvement was also reviewed, with discussion of monitoring for morning stiffness. The increased risk of cardiometabolic comorbidities such as hypertension, hyperlipidemia, glucose intolerance and increased risk for cardiovascular events was reviewed with the patient. The patient was also encouraged to avoid smoking and follow regularly with his primary care physician. Various treatment options were discussed, including topical corticosteroids, topical vitamin D analogues and phototherapy. Given the localized presentation, triamcinolone 0.1 % ointment BID to the body and fluocinonide 0.05 % scalp solution was prescribed for a 2-week course (Eichenfield et al. 2014), with a goal to transition to pulsed treatment on weekends as needed.

Psoriasis is a chronic inflammatory multisystem disorder. It occurs worldwide and is slightly more common in women than in men. Although it can present at any age, psoriasis is most commonly seen around age 20 or between 50 and 60 years old (Sabat et al. 2007). Psoriasis is rapidly becoming more prevalent in the non-Caucasian population. In a 2009–2010 National Health and Nutrition Examination Survey (NHANES), the prevalence of psoriasis in the US population of color was 1.6 % in Hispanics and 1.9 % in African Americans, which is much higher than the previously reported NHANES data from 1996 (Rachakonda et al. 2014). The wide variation in prevalence worldwide is multifactorial, ranging from differences in sun exposure and climate to dietary intake (Parisi et al. 2013; Mr 2004) Genetics also play a role in susceptibility to psoriasis. Genes such as HLA-Cw6, which plays a role in adaptive immune response, is amongst one of the strongly associated susceptibility genes for psoriasis (Nair et al. 2006; Marsh et al. 2000) The prevalence of this allele is 15.09 % in Africans. The PSORS1 major histocompatibility complex (MHC) region may also be associated with psoriasis (Bowcock and Krueger 2005).
The pathogenesis of psoriasis is not completely understood. Influenced by genetic and immune-mediated factors, psoriasis involves immune dysregulation and hyperproliferation of the epidermal keratinocytes and increased epidermal cell turnover. Environmental factors such as infections (ie staphylococcal, streptococcal, and HIV), alcohol, and medications (beta-blockers, steroid withdrawal, lithium, antimalarials) are often associated with psoriasis.
In darker skin types, the impact of psoriasis is often more severe compared to Caucasian patients (Shah et al. 2011). Psoriasis can present diagnostic challenges due to its overlapping features with other papulosquamous disorders and decreased ability to identify erythema (Alexis and Blackcloud 2014).
Psoriasis has a great impairment on quality-of-life in patients with skin of color. Using the Dermatology Life Quality Index (DLQI), subjects impacted by the disease are also treated for pruritus and pain as well as psychosocial impacts of embarrassment and interference with work and studying (Shah et al. 2011). The psychosocial factor of psoriasis may be related to cultural variations in perceptions of skin disorders, and the impact of dyspigmentation following psoriasis treatment seen in skin of color. The quality-of-life concerns included: feelings of self-consciousness, embarrassment, anger, frustration, and helplessness.
Only gold members can continue reading. Log In or Register to continue