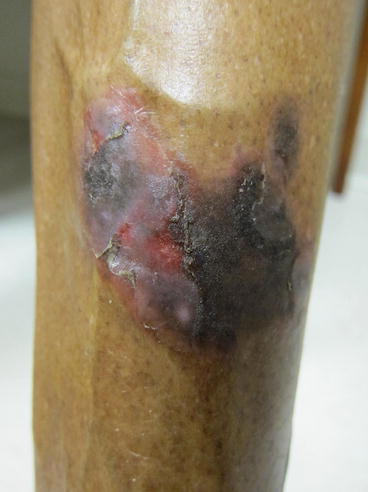 The cutaneous disease in combination with oral mucosal lesions was most consistent with lichen planus. However, the differential for the cutaneous disease includes pityriasis rosea, guttate psoriasis, lichen simplex chronicus, and lichenoid drug eruption. The differential for oral lesions includes leukoplakia, candidiasis, oropharyngeal cancer, and syphilis.

A biopsy was undertaken in this case to ensure correct clinical diagnosis. Histologic features included a saw-tooth pattern of epidermal hyperplasia, orthokeratosis, beaded hypergranulosis and destruction of the basal layer, which is typical of lichen planus. Other common findings include a dense, bandlike infiltrate composed of lymphocytes and melanophages in the superficial dermis, civatte bodies (necrotic keratinocytes) in the superficial dermis, and epidermal hyperplasia in hypertrophic cases (James et al. 2011).

The nature of the diagnosis of LP was discussed with the patient. Treatment options were discussed, including topical or systemic corticosteroids for cutaneous lesions and topical corticosteroids, topical immunomodulators, or intralesional steroids for oral lesions. Given the presence of both cutaneous and oral disease, topical triamcinolone 0.1 % gel for the buccal mucosa and clobetasol 0.05 % ointment to the shins was prescribed twice daily for a 3-week course. She was instructed to contact the clinic should lesions worsen or fail to respond. The possibility of post-inflammatory hyperpigmentation despite treatment was reviewed. The importance of close follow-up was also emphasized, especially given the presence of oral lesions and the known correlation with squamous cell carcinoma. Because of the patient’s history of recent fatigue and finding of oral lesions, screening hepatitis panel was sent, which was negative for hepatitis C.

Lichen planus is a common disorder that has an estimated prevalence of about 1 % of the general population (Boyd and Neldner 1991). Though there seems to be no racial predilection for the disease itself, the age at which the disorder appears varies. In patients of European descent, the peak incidence is between 40 and 70 years. It is generally rare for individuals under the age of 20 to have the disorder. However, in the Indian subcontinent, Arab countries, and Mexico, childhood lichen planus can account for more than 10 % of all cases (James et al. 2011).
LP is an idiopathic disorder. As caspase-3 is often found to be elevated in cutaneous and oral lesions, it is suspected that apoptosis of basal keratinocytes as mediated by cytotoxic T-cells is involved (Goldsmith and Fitzpatrick 2012). T-cells may be activated through an autoimmune mechanism or with an outside source including viruses, medications, and stress (Taylor SC. Treatments for skin of color 2011). LP has been shown to be correlated with a variety of diseases: hepatitis C, hepatitis B, and primary biliary cirrhosis. Studies have showed a higher prevalence of serum autoantibodies in Chinese patients with oral LP, higher rate of HBsAG in Nigerian patients with cutaneous LP, and a strong correlation between presence of hepatitis C virus and LP in Japanese and Mediterranean populations (Taylor SC. Treatments for skin of color 2011). However, the extent to the correlation and any causal relationship remains controversial. A recent study of Chinese patients with oral LP showed that HCV antibodies were detected to be positive at a lower rate than the control group (Zhou et al. 2010). In patients that have widespread and severe disease, and particularly oral disease, screening for hepatitis should be considered. Another possible etiology includes medication induced disease, which causes clinically and histologically similar lesions to LP. The mechanism of injury is still unknown, but the most common medications implicated are ACE-inhibitors, beta blockers, antimalarials, TNF-α inhibitors, and thiazide diuretics (Shiohara and Kano 2012). Contact allergens have also been associated with the eruption of oral LP. Specifically, prolonged exposure to dental amalgam fillings have been implicated. Most patients have regression of disease with removal of the metal. Interestingly, many of these patients have negative patch tests (Shiohara and Kano 2012).
Classically, LP in skin of color is characterized as a cutaneous disease with pruritic, flat topped, polygonal, dark violet or slate blue papules and plaques with fine scale on the wrists, flexural surfaces of arms, genitalia, and mucous membranes. The site of involvement may differ by ethnicity, as shown in a study of African children where lower limbs were most affected (Nnoruka 2007). Because other inflammatory papular eruptions may also have a violet hue in patients with Fitzpatrick skin types III-V, the waxy characteristic of the papules in LP can often help to differentiate (Abdel-Naser et al. 2005). In addition, the surface of the papules/plaques is often covered in gray puncta or streaks, called Wickham striae.
The most common variant after classic LP is hypertrophic as seen in a study of African children (Nnoruka 2007). Other variants of cutaneous disease include linear, bullous, annular, atrophic, actinic, lichen planopilaris, and lichen planus pigmentosus. Actinic LP is more common in skin of color, almost exclusively affecting a younger population in the Middle East, Egypt, Tunisia, and India. This form is unique with non-pruritic photo-distributed eruption of hyperpigmented patches (Sharma et al. 2013). Lichen planopilaris is a variant of LP that typically involves the scalp. Lesions often appear as perifollicular keratotic plugs with surrounding erythema, often leading to cicatricial alopecia. It may occur independently of LP or with classic oral and/or cutaneous lesions (Shiohara and Kano 2012). A rare variant of LP is the Graham-Little-Piccardi-Lassueur Syndrome, which is characterized by the triad of non-scarring hair loss in the inguinal and axillary regions, typical cutaneous or oral LP, and scarring alopecia of the scalp (Antonio et al. 2014). Nail changes occur in 5–10 % of patients with LP and appear as longitudinal ridging and splitting, often with onycholysis. More common in other ethnic groups, the Asian population rarely has nail changes (Taylor SC. Treatments for skin of color 2011).
Only gold members can continue reading. Log In or Register to continue