Acne rosacea is a chronic, inherited cutaneous condition involving persistent erythema of the convexities of the central face (cheeks, chin, nose, and central forehead) lasting for at least 3 months, and is characterized by remissions and exacerbations. It is considered a syndrome encompassing a broad spectrum of clinical signs described as primary and secondary features.1 Primary features include flushing (transient erythema), nontransient erythema, papules and pustules, and telangiectasia. Secondary features include burning or stinging, plaque, dry appearance, edema, ocular manifestations, peripheral location, and phymatous changes. A typical patient presents with some but not all of the possible manifestations. Understanding the disease is of importance because of its prevalence, as well as significant lifestyle and treatment implications associated with the diagnosis.

In 2002, an expert committee assembled by the National Rosacea Society explicitly defined and classified rosacea into four subtypes and one variant.1 Evolution from one subtype to another may or may not occur.

Although rosacea has been described since the 14th century2 and has been one of the most common skin disorders, its pathogenesis remains unclear and controversial and has also been the subject of prolonged study. However, there are several key components in its development and these include3:

There is also a strong hereditary component. In a study in 1996 by the National Rosacea Society, nearly 40% of the respondents indicated they had a family member who also suffered from rosacea.4 The condition is often called the “curse of the Celts” because it is most common in fair-skinned, fair-haired people of western or northern European descent. However, it can also occur in Asians and African Americans who have darker skin.1 Rosacea occurs in both men and women, with the onset typically after age 30. Before age 30, people who have extremely red-flushed cheeks through exercise may have rosacea. Unfortunately, there has been no affirmative etiology accounting for this condition.

Rosacea has a major psychosocial impact on patients’ quality of life.5 They are often left with feelings of self-consciousness and isolation. According to the National Rosacea Society, 76% had lowered self-confidence and self-esteem, 65% felt frustrated with the condition, and 41% reported that it had caused them to avoid social gatherings.

There is currently no definitive cure for rosacea. There are only treatment modalities to control the symptoms and to keep them quiescent. The management spans a broad spectrum of therapeutic options due to its complexity. Fluctuations in symptoms, relapses, and the progressive nature of the disease necessitate a detailed understanding of the available treatment options and their corresponding appropriate usage. It is also important to understand that since there is a wide spectrum of disease manifestation, success in treatment may require multiple combined treatment modalities.

Patients’ education is of paramount importance because the disease is likely to wax and wane and accompany them for a long time. They should fully understand the nature of the disease and take control of their management. It is the role of the patient that plays a more vital role than the role of the physician. A more educated and motivated patient is one who will more likely obtain a better result.

Flare-ups and exacerbations of rosacea often appear to be triggered by environmental or lifestyle factors and most are related to flushing. Some of the most common triggers are: sun exposure, emotional stress, hot or cold weather, wind, heavy exercise, alcohol consumption, hot baths, spicy foods, humidity, indoor heat, certain skin care products, heated beverages, certain cosmetics, medications, medical conditions, and certain foods.6 However, not every trigger affects every patient and the triggers are unique to each individual patient; hence avoidance of every potential factor is unnecessary and impractical. Various studies show that the percentages of patients affected with the various conditions may vary. In a survey by the National Rosacea Society in 2010, alcohol was a trigger for 76% of the patients, with red wine being the most common at 72%, followed by white wine at 49%, and then beer at 42%.7

An appropriate management strategy is to take a thorough history to evaluate for the presence of any identifiable triggering agents before initiation of any medical, laser, or surgical therapy. Patients can identify their triggers by keeping a record of the possible rosacea triggers and matching them with their flare-ups of signs and symptoms. In unscientific surveys of patients with rosacea who identified and avoided their personal rosacea triggers, more than 90% reported that their condition had improved in varying degrees.8

Use of Skin Care and Cosmetic Products

Because rosacea patients have skin that is very sensitive and easily irritated resulting in redness, inflammation, and stinging, everyday skin care to maintain the integrity of the skin barrier while avoiding agents that aggravate or trigger flushing is an important component of rosacea management. It is therefore essential for them to select the mildest and most appropriate skin care products that do not irritate their skin. A useful rule of thumb is to select products that contain no sensory-provoking ingredients, no volatile substances, no minor irritants or allergens, minimal botanical agents, and no unnecessary ingredients. The same principles apply for cosmetic products. They should be advised to avoid any products that cause burning, stinging, itching, or other discomfort. They should also be advised against astringents, toners, menthols, camphor, and waterproof cosmetics that are difficult to remove and require the use of harsh agents that may induce more irritation. New cosmetics should be regularly purchased to minimize microbial contamination and degradation. Brushes are preferred over sponges to avoid abrasion and also brushes can be easily cleaned to decrease bacterial contamination.9

The use of daily broad-spectrum sunscreen is recommended for all patients with rosacea,10 with protection against both ultraviolet A (UVA) and ultraviolet B (UVB) light. Physical blocking agents such as titanium oxide and zinc oxide can also be used. In addition, the sunscreen should contain protective silicones such as dimethicone or cyclomethicone.

There are two groups of skin care products targeted at patients with rosacea. One is over-the-counter products and the other is a therapeutic line labeled as medical-grade skin care products, which are typically distributed under the care of a treating physician.

This is a moisturizing lotion containing furfuryl tetrahydropyranyladenine as PRK-124 (0.125%, Pyratine XR, Senetek PLC, Napa, California) that is used twice daily for 12 and 48 weeks, and has been found to be effective for the treatment of mild to moderate rosacea without irritating the skin.11,12 It is a plant cytokinin shown to have growth modulatory, antioxidative, and antisenescent effects on human skin cells. It reduces redness by inhibiting the enzyme kallikrein, a known and highly significant contributor to a normal inflammatory response. This treatment regimen also decreases skin transepidermal water loss and increases skin moisture content with no evidence of skin irritation, and hence improves the skin barrier function that is compromised in rosacea. It has been shown to significantly reduce erythema by 22% at week 12, with continuous improvement to 45% at week 36. Skin papules and pustules were dramatically reduced by 21% at week 4 with a further 89.5% decrease at week 48. Telangiectasias were decreased by 12% at week 4, with continuous improvement to 27.8% at week 36.

The Revaleskin (Revaleskin Products, Inc., Richmond, Virginia) is a medical-grade skin care line marketed for its ability to improve wrinkles, fine lines, and discoloration. The active ingredient is CoffeeBerry whole fruit extract, which is an agent derived from the fruit of the coffee plant, Coffea arabica. This extract is rich in polyphenol antioxidants such as chlorogenic acid, condensed proanthocyanidins, quinic acid, and ferulic acid. In general, topical antioxidants exert their effects by downregulating free radical-mediated pathways that damage skin.13

Avène (Pierre Fabre Laboratories, France) is a skin care line consisting of four products. First, there is Redness-Relief Dermo-Cleansing Milk for redness-prone sensitive skin. This product contains Ruscus extract that improves microcirculation, dextran sulfate for decongestion and minimizing swelling, hesperidin methyl chalcone (HMC) that protects and strengthens vascular walls, and Avène thermal spring water that is soothing and anti-irritating. The second product is Diroseal, which is an anti-redness night lotion. It contains retinaldehyde that increases epidermal thickness and prevents neoangiogenesis, and also contains dextran sulfate and HMC. The third product is a Redness Relief Soothing Cream with SPF 25 to be used daily. It contains Ruscus extract, HMC, dextran sulfate, Avène thermal spring water, and titanium dioxide. The last product is the Antirougeurs FORT Relief Concentrate, which is to be used daily as an intensive treatment for affected areas following Redness Relief Soothing Cream with SPF 25. It contains saponin-enriched Ruscus extract that acts as a vasoconstrictor that improves cutaneous microcirculation with anti-inflammatory and antiangiogenic properties (reduces VEGF), HMC, and dextran sulfate.

The goals of pharmacotherapy are to reduce morbidity, minimize irritative symptoms, achieve longevity in disease control, and prevent complications. These can be divided into prescriptive topical and oral medications.

The use of antibiotics has been common since the 1950s because microorganisms were thought to be the underlying cause of the disease. However, although treatment philosophy has evolved and bacterial infection is no longer thought to play a major part in the pathogenesis, oral and topical agents continue to be used alone or in combination because of their demonstrated efficacy and also for their anti-inflammatory properties. Topical metronidazole gel 0.75 or 1% is an imidazole, ring-based antibiotic active against various anaerobic bacteria and protozoa and is helpful for mild disease and as an adjuvant to systemic therapy. Erythromycin 2% topical solution is an alternative. Topical clindamycin inhibits bacteria growth by arresting ribonucleic acid (RNA)-dependent protein synthesis; when applied to the skin, it is converted to an active component that inhibits the microorganism, and is effective against mild to moderate papulopustular rosacea.

Agents that have been used to treat acne can be used to treat patients with pustules, papules, and the phymatous type of rosacea. Benzoyl peroxide is converted into benzoic acid when applied to skin and has keratolytic and comedolytic effects. Administration results in free-radical oxygen release that oxidizes bacteria proteins in sebaceous follicles, decreasing the quantity of irritating free fatty acids and anaerobic bacteria. Azelaic acid, which is available in two strengths (15% gel, Finacea [Bayer HealthCare Pharmaceuticals Inc., Whippany, New Jersey]; 20% cream, Azelex [Allergan, Inc., Irvine, California]), has been found to be effective against mild to moderate papulopustular rosacea (▶ Fig. 13.1).14 It works by reducing the production of reactive oxygen species by neutrophils, decreasing the growth of microorganisms by inhibiting protein synthesis, and inhibiting follicular keratinization, which may prevent development of comedones. Some patients may report transient burning or stinging. Sodium sulfacetamide and sulfur have also been used topically to treat rosacea. The former has antibacterial properties and the latter is antiseptic with keratolytic action. 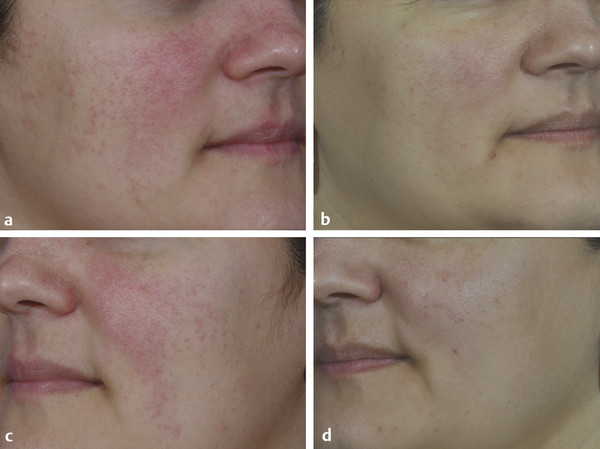 Fig. 13.1 Before (a, c) and after (b, d) images of a patient with persistent erythema, papules, and intermittent pustules treated with Finacea gel (azelaic acid 15%) (Bayer HealthCare Pharmaceuticals Inc., Whippany, New Jersey).