Even in young patients with early changes of sun damage, there are often several different aspects of photoaging present―lentigines, erythema and telangiectasia, and wrinkles or skin texture changes. The author has found that treatment outcomes and patient satisfaction are increased when these different aspects of photodamage are targeted using two or more different lasers in the same session. Patients get better results with fewer treatments―saving money and time with both visits to the office as well as periods of healing.

The PDL laser is an excellent choice for reducing redness and very fine telangiectasias. Larger telangiectasias are more effectively treated with a 1,064-nm neodymium:yttrium aluminum garnet (Nd:YAG) laser. The longer wavelength of 1,064 nm can penetrate more deeply to better reach the deeper vessels, and longer pulse widths can be matched to larger vessel sizes. In the treatment of redness and capillaries, such as is often seen in rosacea as well as sun damage, the author often combines both the 595-nm PDL (Vbeam Perfecta, Candela Corporation, Wayland, Massachusetts) and the LP 1,064-nm Nd:YAG laser (GentleYag, Candela Corporation, Wayland, Massachusetts). The 1,064-nm wavelength is first used to treat the more visible and larger telangiectasias; then, immediately after treatment with the Nd:YAG, the PDL is used to treat the finer vessels and diffuse erythema (▶ Fig. 7.1). This combination is so frequently used together that the lasers are kept in the same room. 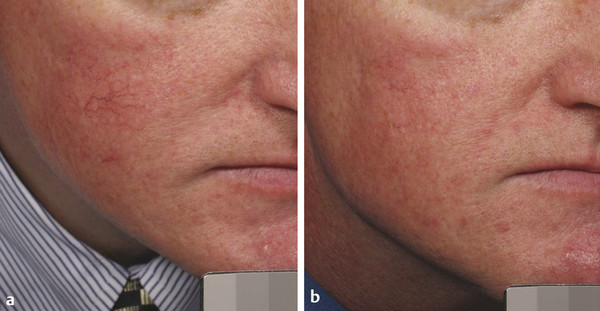 Fig. 7.1 Laser treatments for telangiectasias and erythema. (a) Prior to procedures. (b) Improvement shown after one treatment with combination long-pulsed (LP) dye laser and 1,064-nm neodymium:yttrium aluminum garnet (Nd:YAG) laser.

There are a number of lasers that can be used to target the dyspigmentation of photodamaged skin. LP alexandrite and QS lasers―including QS 532-nm Nd:YAG, QS ruby, and QS alexandrite—can target specific pigmented lesions such as freckles or lentigines. QS lasers emit very short pulses of light that match the thermal relaxation time of the small particles of melanin and melanin storage units―melanosomes. LP alexandrite lasers likely target the larger melanocytes or the diffuse melanin staining of keratinocytes that characterizes solar lentigines.

Intense pulsed light (IPL) is a nonlaser, light-based system that is used to treat photodamage as well as unwanted hair. The IPL has a spectrum of wavelengths with an output of noncoherent light ranging from 500 to 1,200 nm, depending on cutoff filters on the lower wavelength spectrum. These varied wavelengths include wavelengths that target erythema (hemoglobin) as well as wavelengths that target pigment (melanin), and even longer wavelengths that target water to induce dermal heating and collagen remodeling. Because the energy is spread over a range of wavelengths, no single wavelength is particularly focused or powerful. Thus, the IPL is best used for mild changes of sun damage, maintenance of results achieved from other procedures, or for those who desire a treatment with minimal downtime. With more significant changes of either a vascular or a pigmented nature, better results may be achieved using lasers whose wavelengths more specifically target the predominant issue. Additionally, in the treatment of more severely sun-damaged skin that has a significant amount of erythema or pigment, IPL can leave well-demarcated areas of clearance in the rectangular shape of the delivery crystal. Subsequent treatments with IPL can reduce the appearance of these areas but patient distress in between treatments can be significant.

Fractional resurfacing devices can treat dyspigmentation while globally improving photodamaged skin. Fractional photothermolysis (FP) creates microscopic columns of thermal injury referred to as MENDs or microscopic epidermal necrotic debris columns. As these MENDs heal, pigment can be pushed to the surface and subsequently exfoliated―resulting in improvement in unwanted pigment.

The author’s selection of laser in the treatment of pigmented lesions depends on the clinical situation. In the case of a light-skinned patient with darker lentigines that are either diffusely spread over a large area or just a few larger lesions, the author prefers the LP 755-nm alexandrite laser (Candela GentleLase, Candela). This laser is used at a low fluence with no epidermal cooling (i.e., dynamic cryogen cooling turned off). Typically a spot size of 12 mm and an energy setting of 16 to 30 J/cm2 are used, depending on patient skin type and darkness of the lesion. Higher fluence can be used in lighter skin types. Overlapping and multiple passes are done over the entire cosmetic unit (cheeks, forehead, or full face) until a slight change is noted in the pigmented lesions, which should turn darker with possibly a slightly dry appearance and redness at the periphery. No blistering or lifting of the skin should be seen. The efficacy of this treatment is best when the contrast between skin color and pigmented target is great (i.e., very fair skin and very dark spots are the most ideal situation). This observation has also been noted in a controlled study.1 When there is very little contrast between skin color and pigmented lesion color, the author does not use this technique due to lack of efficacy and increased risk of unwanted side effects. The LP alexandrite is not used on tanned skin or any skin type darker than Fitzpatrick type IV. The lighter the lesion, the more energy is required to have an effect on the target. For darker lesions, lower energy is needed to achieve a clinical effect and to minimize side effects.

In the case of lighter lentigines, darker skin types, treatment location of arms or legs, or very little contrast between skin color and lesion color, the author chooses either QS 532-nm laser spot treatment or a nonablative fractional laser alone or in combination with an LP alexandrite or a QS laser. Desired end points of treatment with the QS laser are varying degrees of whitening or an ashy appearance―in lighter skin types a larger degree of whitening is appropriate and more effective; however, in darker skin types, a very slight whitening or only slight ashy appearance is preferred in order to minimize size effects of hypopigmentation and postinflammatory hyperpigmentation.

A number of devices have built-in combinations of therapies. Radiofrequency (RF) energy has been combined in several devices with IPL and diode lasers. The goal of the combination of technology is to achieve skin tightening and improvement in the visible changes of sun damage in the skin, or enhancement of the improvement seen with the light-based device alone. Sadick2 et al reported significant overall skin improvement (75.3%) and significant patient satisfaction (92%) using the novel device of electro-optical synergy (ELOS) that combines RF and IPL energy in a single pulse. In 2006, Alexiades-Armenakas3 evaluated the sequential combination use of two devices that combined bipolar RF with light-based energy―one device combined RF with a diode laser and the other mechanism combined RF with IPL. Blinded physician evaluation of improvement per category (rhytids, laxity, elastosis, dyschromias, erythema–telangiectasias, keratoses, and texture) after each treatment was mild (average improvement of 10.9% per treatment), but overall patient satisfaction was significantly higher (71.4%). Patient satisfaction was attributed to the combined effects of the technologies.

Several studies have investigated the combinations of different lasers in the same session for the cosmetic enhancement of facial skin. Berlin4 et al reported successful combination of very light erbium followed sequentially by IPL. The number of patients who finished the study (12 out of 15) reported mild erythema lasting up to 1 week and mild scaling for 3 to 4 days after the treatment. Overall satisfaction at the 3-month follow-up was 63%. A study by Lee5 compared the efficacy of the 532-nm, msec potassium titanyl phosphate (KTP) laser alone and the 1,064-nm, msec Nd:YAG laser alone as well as in combination for the treatment of skin changes of photoaging. The combination of the two wavelengths gave slightly better results than either alone. A similar study by Tan6 et al was a split-face study that showed slightly greater improvement in the side that received combination treatment of 532-nm and 1,064-nm wavelengths. Studies by Goldman7,8 et al have shown benefit in sequential use of ablative erbium immediately after ablative carbon dioxide (CO2) laser in resurfacing to improve healing times and outcomes.

The combination of QS lasers―532 nm followed by 1,064 nm―was shown to be significantly more effective in the treatment of Hori’s nevus than the 1,064 nm alone.9 A higher incidence of postinflammatory hyperpigmentation was seen on the combination laser side but all resolved in 2 months. In treating giant congenital nevi, Funayama et al demonstrated effective and safe pigment lightening using sequential PDL followed immediately by QS ruby laser.10 Trelles et al reported better results in leg vein treatment (blue veins and veins > 1 mm responded best) using a laser that combined a pulsed dye and Nd:YAG laser sequentially in the same pulse.11 The sequential pulsed dye–1,064-nm Nd:YAG laser has also been reported to be an effective and safe treatment for venous malformation.12

In nonrejuvenation applications, lasers have been combined to treat tattoos as well as unwanted hair. Recently, Weiss and Geronemus reported more efficient tattoo removal with sequential QS ruby laser followed by ablative fractional resurfacing in the same session.15 Not all studies have shown benefit in combining wavelengths in the same session. A private group in Iran reported a study of laser hair removal on the legs using either 755-nm alexandrite, 1,064-nm Nd:YAG, or a combination of both lasers.16 There was greater pain and increased side effects in the area treated with the combination of the two wavelengths.

As previously discussed, it is commonplace for this author to combine LP 1,064-nm Nd:YAG laser with PDL in the same session for more effective clearance of vascular conditions. There is also frequent combination of a vascular laser treatment (595-nm pulsed dye, 1,064-nm Nd:YAG, or both) with a laser treatment specifically to target the pigmented areas of concern. This approach is chosen by the author when it is felt that the vascular component is too great to get good results with IPL but there is also pigment present to treat. A good example would be a face with numerous larger telangiectasias as well as lentigines and freckles.

For larger areas of pigment or large patches of pigment such as seen in melasma, a nonablative fractional laser (1,550 nm or 1,927 nm) is used either alone or in combination with low energy LP alexandrite laser prior to the fractional laser. If there is any erythema or telangiectasia, it is treated with one or both of the vascular lasers prior to treatment with the nonablative fractional laser. There is a nominal charge for the additional laser treatments and patient satisfaction with the procedure is greatly increased because several different aspects of skin concerns are taken care of in one session. The series is as follows if all lasers are utilized: vascular lasers first, then LP alexandrite or QS 532-nm Nd:YAG laser, then fractional nonablative laser.

When there are more significant texture changes or rhytids from sun damage, the preference is to use a nonablative fractional device. In order to achieve the most consistent and quick results with pigment when a patient is having a series of fractional nonablative procedures, the LP alexandrite laser is often used, as described above, prior to the fractional laser on the same day. Similarly, erythema and telangiectasias are pretreated with a vascular laser before the fractional treatment (▶ Fig. 7.2). Fractional nonablative lasers do effectively treat pigment but the response is enhanced with pretreatment with the alexandrite laser; and patients note immediate improvement with reduction of pigmented lesions, whereas the collagen remodeling takes several months to occur. Another frequently used combination is pretreatment with full-face IPL followed by fractional nonablative laser (▶ Fig. 7.3).