We do not fully understand the biological basis by which scars improve after laser therapy. Scarring is a tissue response, acquired during the second trimester of fetal development at the same time as cellular immunity.4 Scar tissue has increased vascular and lymphatic channels, as well as changes in collagen structure compared to normal skin. However, in scars the blood vessels, lymphatics, and collagen often are in a chaotic array with resultant decreased physiological function. It is known that in the treatment of healthy skin with a fractional ablative laser, these microscopic thermal injuries are produced in the dermis and stimulate a wound-healing cascade that ultimately leads to tissue remodeling. Normal skin can remodel these microscopic wounds without scarring. Macroscopic thermal burn injury causes the worst scars seen in clinical medicine. It is not understood how macroscopic thermal injury causes scars, and microscopic thermal injury improves scars. The improvements appear to be in the epidermis, dermis, and also have effects in the adnexal skin structures. Many patients report immediate improvement in pruritus, pain, and increased range of motion within hours to weeks after even one treatment session. The skin heals first with improvement of dyschromias followed in time with improvements in texture and topography. Further studies are needed to understand the biological enhancements seen by laser therapy of scars.

16.3 Laser and Surgery Synergy for Treatment of Scars

The treatment of scars is a multispecialty endeavor. A combination approach with medical experts yields optimal scar amelioration. If an injury heals in the presence of tension, hypertrophy often ensues. Understanding the role of tension in the development of a scar is essential to design a successful treatment strategy. If there is significant hypertrophy or contracture present in a scar, surgical intervention is necessary to relieve the tension or there is a high likelihood the scar will re-form. After tension relief, hypertrophic and contracture scars are more elastic with new remodeling of collagen; and they are more amenable to laser therapy. However, if a scar has had initial fractional laser therapy, this often makes surgical intervention easier to perform due to thinner collagen bundles.

16.4 Approach to Treatment of Cutaneous Scars

In the initial evaluation of the scar, the physician should determine what characteristics the scar possesses and then choose therapies to address these issues. Some factors to consider before choosing the parameters of a laser device include thickness of the scar (thicker scars need increased depth), age of the scar (younger scars decrease depth and density), body location of the scar (off-face decreases depth and density), skin type of the patient (darker skin types decrease density), and comorbid medical conditions. Next, determine if a scar is hypertrophic, keloid, contracture, or atrophic. Then dyschromia of a scar should be evaluated for erythema, hyperpigmentation, and hypopigmentation. Often, severe scars have many of these characteristics within the same scar. The author’s approach is to first use a nonablative laser to treat vascular and pigmented components of a scar and then to utilize fractional ablative tools for ablation of scar tissue, coagulation of microvasculature, and stimulation of subsequent neocollagenesis. The fractional ablative devices are the mainstay of therapy because of their ability to improve all scar types. Repeated laser sessions can occur until achievement of patient and/or physician satisfaction. It is the author’s clinical experience, as well as confirmation in published articles, that with each laser session scars continue to improve. In one study for the treatment of an atrophic leishmaniasis scar with a nonablative fractional laser, a 40% improvement resulted after three laser sessions. After ten laser sessions, a 90% improvement was achieved.5

Lasering cutaneous scars requires proper diagnosis of scars as well as an understanding of their histology and biology. The majority of scars result from acne, surgery, trauma, or burns. Techniques and settings for each of these scars are reviewed in the following sections, based on the etiology of the scar.

Acneiform scars are the result of compromised collagen production during the natural wound-healing process, resulting in cutaneous depressions. Topographical features of acne scarring include perpendicular bundles of collagen that anchor down the skin of the scars. The majority of patients have facial atrophic or ice-pick scars. Both result from loss of collagen deposition during the wound-healing process of acneiform lesions. The goals of laser resurfacing are to stimulate collagen and help “plump up” these areas of collagen loss. Given the dermal pathology present with acne scarring, particularly with atrophic scars, therapy modalities should optimally be capable of affecting dermal remodeling at least 1 mm below the skin. Acne scars on the chests and backs of patients are often hypertrophic or keloidal (▶ Fig. 16.1). Treatment of acne scars has traditionally been done with limited success; however, with the advent of deep-reaching, fractional lasers, greater success has been achieved. The acne-scar technique takes a multiprocedural approach (▶ Fig. 16.2). Superficial approaches for skin-surface refinement and pigmentary variation include glycolic acid chemical peels and topical tretinoin and hydroquinone. Moderate approaches to address deeper scars include punch biopsy and closure, z-plasty transposition flap, fat polysaccharide matrix or collagen, scar subcision, dermabrasion, carbon dioxide (CO2) laser resurfacing and, most recently, fractional photothermolysis.6 Advances in laser technology over the last decade have led researchers to study their utilization for the treatment of acne scarring. 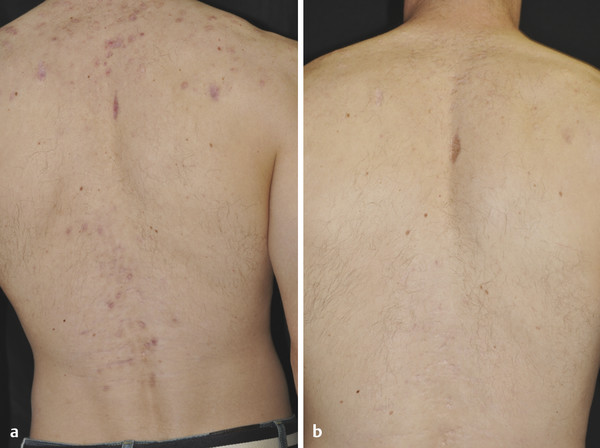 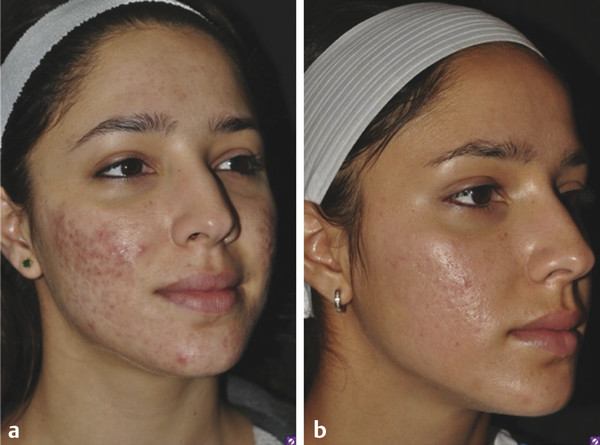 Fig. 16.2 Acne scars―multimodality therapy. (a) Before therapy. (b) After therapy.

Ablative fractional CO2 lasers have been well studied for acne scarring by Dr. Roy G. Geronemus, MD. In a case series of two to three treatment sessions for moderate to severe acne scarring, there were clinical improvements of 26 to 50% in texture, atrophy, and overall amelioration on topographic analysis. Improvements of 43 to 79.9% in scar depths were obtained; there was a mean depth upturn of 66.8%. A greater degree of improvement was seen with ablative fractional laser technology as opposed to previous studies with nonablative fractional lasers, resulting from deeper dermal penetration of the fractionated CO2 device. Particularly, it was noted that patients treated for deeper scars on the cheeks with higher energy levels on the second and third treatments received the highest improvement scores.7 Side effects with the ablative fractional tool were mild to moderate, including posttreatment erythema, edema, and petechiae―all of which resolved within 7 days after each session. Correlating with these clinical data, in vivo studies with this device by Hantash et al have shown tissue ablation and thermal effects as deep as 1 mm into the skin, likely accounting for the effect on moderate to severe acne scarring observed.8

In another study with the fractionated CO2 laser for the treatment of acne scarring, 15 subjects underwent up to three treatments. Patients with a diversity of Fitzpatrick skin types (I–V) were treated, with no complications of short- or long-term hyperpigmentation reported. Of the entire number of subjects, 87% sustained significant improvement in the appearance of acne scarring at 3-month follow-up visits. All patients reported transient erythema that resolved in the first 2 weeks after therapy.9 Ablative fractional instruments work for all skin types. In a prospective study on five Asian patients of skin type IV with moderate to severe atrophic acne scarring, the subjects underwent two, single-pass sessions with an ablative fractional CO2 laser six to eight weeks apart. Treatment parameters were: fluence, 28 J/cm2; pulse width, 2.5 ms; spot size, 300 µm; penetration depth, up to 500 µm; and degree of skin coverage, 20%. At 2 months posttreatment, all five patients showed some clinical advancement (four: mild improvement; one: moderate improvement). All patients had erythema that lasted for a mean of 6 days. No other complications, including postinflammatory hyperpigmentation, were observed.10

A study was performed on 20 Korean patients with atrophic acne scars treated in a single session with the combined deep and superficial modes of an ablative CO2 fractional laser. Follow-up results revealed that one patient had clinical improvement of 76 to 100%; nine subjects had enhancements of 51 to 75%; seven patients had moderate advancements of 26 to 50%; and three subjects had minimal to no amelioration. The mean duration of posttherapy crusting or scaling was 6.3 ± 3.0 days, and posttherapy erythema lasted 2.8 ± 4.6 days. A combination of two different treatment modes may provide a new therapy algorithm for acne scars in Asians.11 Another study treated 13 patients with skin type IV and atrophic scars during three sessions with an ablative fractional CO2 laser, at an average of 7-week intervals. At 6-month follow-up, 85% of the subjects were rated as having at least a 25 to 50% improvement. At 1 month after three treatments, surface smoothness (p = 0.03) and scar volume (p < 0.001) significantly improved relative to baseline.12