The Science Behind Lasers: How the Physical Properties of Lasers Affect the Skin

Fig. 3.1 Waveforms can be characterized by their amplitude, wavelength, and period.

Laser light development is based on Einstein’s quantum mechanics. He first discovered the theory of stimulated emission within the framework of quantum theory, and all modern laser physics is based on this principle. Quantum mechanics states that if an atom is in an excited state, it is unstable and will seek to return to its lower energy, ground state. The atom will emit a photon in the process of returning to its ground state. However, if an incident photon strikes the already-excited atom, two photons will be emitted as it returns to its ground state. These two pathways for photon emission are referred to as spontaneous and stimulated emission, with the latter being the basis for laser physics.

Spontaneous emission of radiation occurs when an atom in excited state transitions to a state with a lower energy (ground state), and in the process emits energy in the form of a photon. A photon is a unit (or quanta) of light (▶ Fig. 3.2a). 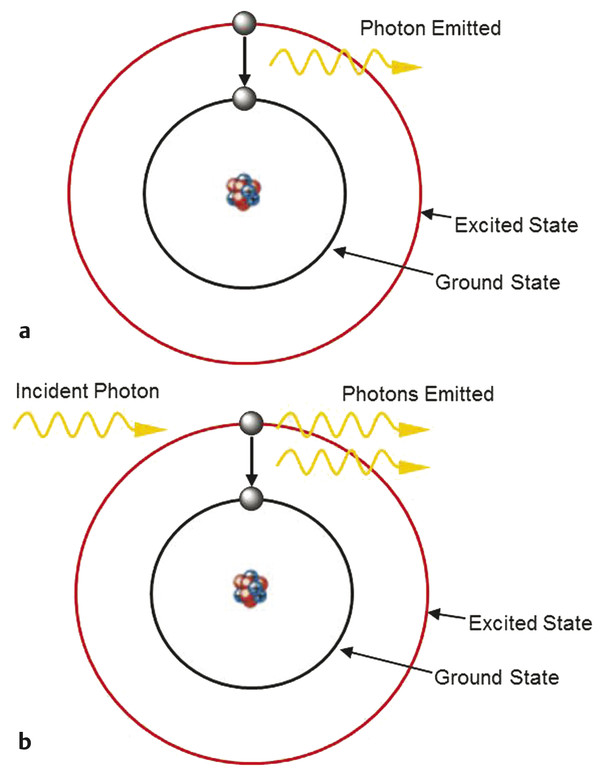 Stimulated emission of radiation occurs when an incident photon strikes an atom already in an excited state. The atom again transitions to a lower energy state, but will emit two identical photons with the same wavelength, phase, frequency, and direction of the photon from the incident wave because it was struck in an excited state (▶ Fig. 3.2b).

A laser is constructed from three principal parts (▶ Fig. 3.3):

Fig. 3.3 The basic components of a laser.

The laser medium is the component that determines the wavelength (and therefore the color) and frequency of the light emitted. Lasers are most often categorized by their wavelength on the electromagnetic spectrum (▶ Fig. 3.4). Early lasers used gas as their laser medium: nitrogen (N), carbon dioxide (CO2), helium (He), and neon (Ne). The lasers that followed used liquids, and were referred to as dye lasers. Dye lasers are capable of generating a wider range of wavelengths than other laser mediums. Solid-state laser mediums were the next iteration, with one of the earliest still being used today (neodymium:yttrium aluminum garnet [Nd:YAG] lasers). 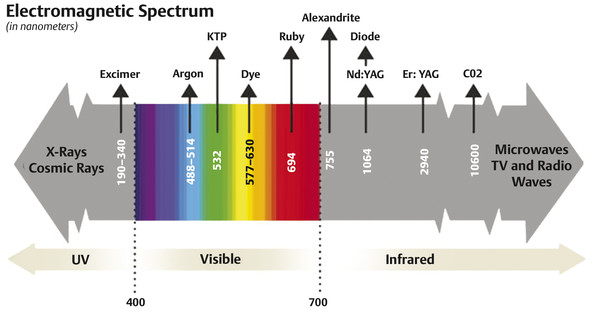 Lasers are more organized, intense, and focused than ordinary light. Laser light is collimated, coherent, and monochromatic. All of these characteristics of laser light allow the focused, targeted use of light in clinical treatments.

Laser light can have a variety of interactions with tissues. These include reflection, absorption, scatter, or transmission through the tissue.5 There are a multitude of possibilities of overall interaction depending on the degree to which these four phenomena occur. The factors that determine the initial effect include the laser wavelength, laser power, laser waveform, tissue optical properties, and tissue thermal properties. In general, absorption controls to a great degree how much reflection, scatter, and transmission occur, and this is primarily determined by wavelength.

Energy is deposited in a tissue when absorption occurs. When light is either reflected, scattered, or transmitted, no energy is deposited and the laser has no effect. When absorption does occur, energy is deposited and molecules begin to vibrate. What occurs depends on how much energy is absorbed. At low energy levels, biological modifications can occur. These can include activation of biochemical reactions or stimulation of the tissues. Clinical examples of this include use of light-emitting diodes (LED) technology to provide skin rejuvenation and stimulate hair growth.

Optimal use of lasers has been enhanced with understanding of the concept of selective photothermolysis.6 Proposed by Anderson and Parrish in 1983, this theory refers to the precise targeting of a structure or tissue using a specific wavelength of light with the intention of absorbing light energy into that target tissue alone. The energy is directed into the target tissue in such a fashion as to damage the target while allowing surrounding tissue to remain untouched. Three components of this interaction are wavelength, intensity, and pulse duration.

The laser wavelength for the target in this theory is selected by its chromophore or substance that absorbs a particular wavelength. This is most obvious with tattoos, where a particular laser is chosen based on its absorption by the color of the tattoo ink (chromophore). With this, appropriate laser energy is absorbed more by the tattoo and less by the uncolored surrounding skin.

The laser energy must be of sufficient strength to either coagulate or vaporize the target. This energy level depends on the physical properties of the target. Laser parameters of power and spot size can be manipulated to reach this energy level.

Using selective photothermolysis depends on understanding laser parameters that can be modified and the terms to describe them:

Lasers can be delivered in a variety of modes. In a continuous mode the laser is always on. Energy is dissipated to surrounding tissues and thus minimizes the chances for selective photothermolysis.

In a shuttered or gated mode, laser energy is simply turned off between pulses. If the duration between pulses is less than the thermal relaxation time of the target tissue, there is less heat dissipation and less risk of injury to surrounding tissues. Typically, peak energy is unchanged from continuous mode.

An improvement on superpulse technology was ultrapulse. Ultrapulse technology allows for high peak energy levels for very short periods of time. Typically, it requires four to five superpulses to deliver the same energy as one ultrapulse. This allows for more precise removal of tissue with less heat dissipation. It is considered the standard for CO2 laser resurfacing.

Q-switched or quality-switched lasers are another method of pulsing energy. Compared to shuttered, the pulse energies are much higher over a very short pulse width.

An alternative to pulsed systems was a scanning-type device. With a scanning of the system, the laser beam is swept across the tissue rapidly enough that the tissue dwell time is less than the thermal relaxation time. This can give the same effect as a pulsed device. Although this method was used by the Sharplan company in the early days of CO2-laser resurfacing, this technology is no longer used today.

Fractional lasers were developed to minimize downtime and lower the risk profile of resurfacing lasers. This technology depends on treating only a percentage of the skin surface at a microscopic level. This allows for bridges of untreated tissue that can assist with quicker healing. The areas of treated skin in fractional resurfacing are called microscopic treatment zones (MTZ), also called microthermal zones (▶ Fig. 3.5). The size and density of these can be varied depending on the device. The MTZ includes both the ablated tissue and any surrounding coagulated tissue. 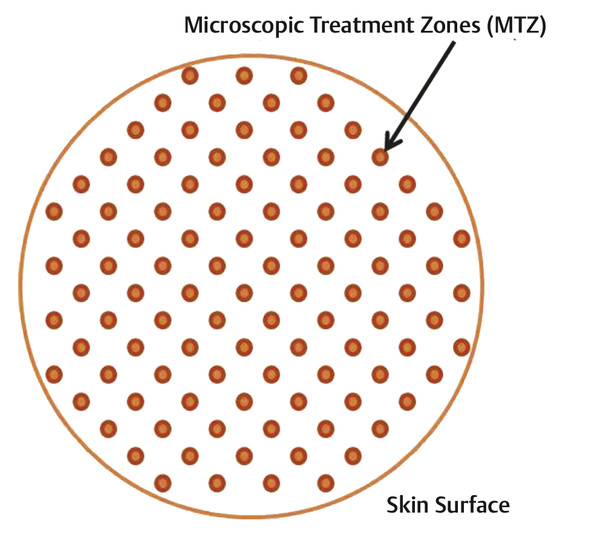 Tags: Lasers and Light Peels and Abrasions
Jun 21, 2016 | Posted by admin in Laser surgery | Comments Off on The Science Behind Lasers: How the Physical Properties of Lasers Affect the Skin
Premium Wordpress Themes by UFO Themes
WordPress theme by UFO themes