The 1,320-nm neodymium:yttrium aluminum garnet (Nd:YAG) laser (CoolTouch, ICN Pharmaceuticals, Costa Mesa, California) was the first exclusively nonablative laser developed. Energy penetration occurs to a depth of 1,600 µm, a potentially effective treatment depth. Safety was optimal, yet studies showed only minimal clinical improvement in rhytids and photoaging.4,5,6 The Smoothbeam laser (Candela Corp., Wayland, Massachusetts) emits coherent light at 1,450 nm. This device also uses water as the chromophore and results in thermal injury to the dermis and dermal components. The epidermis is protected via dynamic cryogen cooling. In 2003, Tanzi et al reported a mild to moderate clinical improvement of wrinkles after a series of four treatments with the 1,450-nm diode laser. Biopsies showed an increase in collagen production in the dermis.7 Although originally designed and cleared for wrinkle reduction, the clinical results for photoaging are modest, and now the device is more commonly used for the treatment of acne. Heating of the sebaceous glands results in improvement of acneiform lesions. Reports of mild improvement in atrophic acne scarring are also published, with the 1,450-nm diode laser outperforming the 1,320-nm laser. Nearly all subsequently developed nonablative lasers, including various Nd:YAG, 1,450-nm diode, 1,540-nm Erbium:glass (Er:glass), and 1,550-nm fractional nonablative lasers, have utilized fractionated delivery systems.

Broadband light devices, also known as intense pulsed light (IPL), emit noncoherent, noncollimated polychromatic light in the 550- to 1,200-nm range. Since they can target melanin, hemoglobin, and water chromophores, they are useful particularly for removal of pigmented and vascular lesions, but have also been found to be useful for photoaging. Studies demonstrate new collagen formation 6 months posttreatment, and moderate subjective and objective improvement in rhytids and dyspigmentation can be seen.8,9

The current nonablative lasers in wide use utilize fractional photothermolysis (FP). The development of the concept of FP has completely changed the manner in which skin resurfacing is performed. In 2004, Manstein et al published a pivotal article describing this novel concept that focuses on the treatment of a fraction of the skin’s surface. Tiny microscopic beams heat small columns of skin, leaving adjacent areas completely intact. The treated columns are termed microthermal treatment zones (MTZs). These MTZs vary in diameter and depth depending on the wavelength used and the energy employed, but are generally less than 400 µm in diameter.10 In addition, the number of columns per square centimeter of skin, a parameter termed treatment density, can be changed in order to adjust the aggressiveness of a treatment. Treatment densities vary among devices, with average density ranging from 6 to 40%. A treatment density of 100% would be equivalent to the previously described full-face traditional ablative resurfacing and is generally not used in fractional devices. Producing tiny columns of damage surrounded by intact tissue allows the healing process to proceed at a much faster rate. In healing after fractional resurfacing, intact viable cells are able to migrate over the treated MTZs. In contrast, the healing process in traditional fully ablative resurfacing requires full differentiation. The process of healing in fractional resurfacing can take anywhere from 24 hours to 3 or 4 days.11 The decrease in epidermal compromise has resulted in a decrease in downtime and complication rates, while maintaining an acceptable efficacy rate.

The introduction of fractional resurfacing has revolutionized laser treatment of photodamage. Devices can be divided into nonablative and ablative types. The first fractional device introduced by Manstein and colleagues was a nonablative device―meaning that the dermis is targeted―leaving the epidermis entirely intact.10 Fractional ablative devices were introduced a few years later. All resurfacing devices, including fractional resurfacing devices, use water as their target chromophore. All of these wavelengths are in the infrared range, since this is where water is able to absorb light most efficiently (▶ Fig. 11.1). Ablative devices produce wavelengths that are highly absorbed by water, resulting in rapid heating of water and vaporization of tissue. Nonablative devices employ wavelengths that are only moderately or mildly absorbed by water, which results in low, slow heating and resultant coagulation of tissue. Both are used in fractional resurfacing and confer different risks and benefits. Ablative fractional devices include the CO2 laser, Er:YAG laser, and erbium:yttrium scandium gallium garnet (Er:YSGG) laser (▶ Table 11.1). The nonablative lasers include the Er:glass and Nd:YAG lasers with wavelengths of 1,410, 1,440, 1,540, and 1,550 nm, as well as the Titan infrared light device, which utilizes wavelengths between 1,100-1,800 nm (Cutera, Brisbane, California). The 1,927-nm fractional device functions like a combination of the ablative and nonablative lasers. Each wavelength has its place in the armamentarium of fractional devices for photorejuvenation. 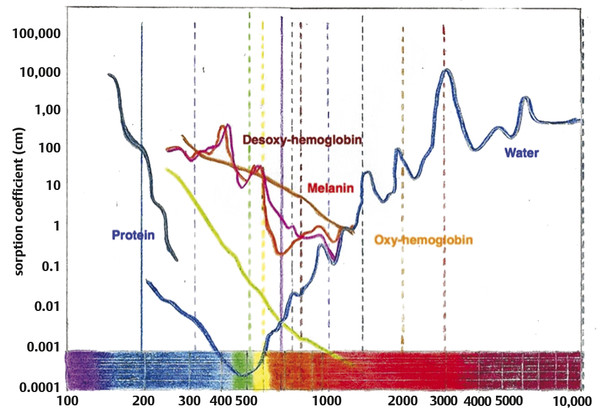 The parameters used in fractional resurfacing are somewhat different from those of traditional lasers. Most lasers operate by varying fluence (the amount of energy delivered to a certain surface area). Fractional resurfacing allows the amount of laser energy and treatment density to be adjusted independently. The energy chosen determines the depth of penetration of the treatment column. For low-energy settings, the penetration will be superficial. The converse is also true; higher energy settings allow for deeper dermal penetration. The energy should be chosen based on the condition being treated. For superficial lesions, a lower energy is needed; for deeper dermal conditions, a higher energy is required. The treatment density can vary depending on the wavelength used but, in general, the higher the density the larger the area of treatment and the more aggressive the treatment. Density settings may need to be reduced when treating darker skin types because lower densities result in fewer side effects, such as dyspigmentation.12 A higher treatment density may require fewer sessions to reach clinical efficacy. As energy settings are increased, MTZs will also increase due to the boost in heat delivered. The spot size from the light device itself does not change but the size of the MTZs will increase as energy rises. Furthermore, a larger diameter MTZ will step up the treatment density. Some devices on the market adjust for this and others do not. It is important to remember this when using a stamp technique device.

The nonablative fractional lasers were the first fractional devices to be introduced. The first nonablative fractional device was cleared by the Food and Drug Administration (FDA) in 2003. This original instrument is a 1,550-nm laser and was called the Fraxel laser (Solta Medical, San Francisco, California). Since its introduction, numerous fractional nonablative tools using multiple wavelengths have become available. All of these wavelengths (▶ Table 11.2) are only moderately well absorbed by water and result in tissue coagulation and not vaporization. The microscopic spot size, along with the relatively low affinity for water, allows the nonablative wavelengths to have deep penetration. The depth of penetration depends on the device, wavelength, and energy used. On average, a classic, nonablative fractional laser of 1,540 or 1,550 nm can deliver tissue coagulation to a dermal depth of up to 700 µm to 1 mm,10,13,14 although proprietary data from one company claims to reach a depth of 1,400 µm (Fraxel Dual 1,550/1,927 nm). The ability to reach deep into the dermis and cause tissue remodeling while maintaining a very attractive side-effect profile is revolutionary for the field of laser medicine. Whereas a depth of 1 mm may not be needed in many clinical situations, deep penetration is desirable in some instances. Dermal conditions, such as deep wrinkling and scarring, respond best to treatment in the deep dermis, whereas superficial conditions, such as pigmentation, may not require such energy.


Recently, nonablative lasers that deliver light at wavelengths of 1,410 and 1,440 nm with relatively low densities have been introduced. These were designed for a “no downtime” procedure that can gradually improve skin texture and pigmentation with repeated treatments. Depth of penetration is up to 390 µm, reaching the dermis, although still relatively superficial when compared to the 1,540- and 1,550-nm instruments. One group presented findings with the 1,440-nm system on pore size and skin texture at the April 2012 American Society for Lasers in Medicine and Surgery meeting.15 A group of 20 patients (Fitzpatrick I–VI) received 6 full-face treatments spaced 2 weeks apart using the company-recommended 8 passes at different preset levels. Using the VISIA-CR Imaging System (Canfield, Fairfield, New Jersey), a pore score was quantitatively evaluated, and a significant reduction was observed. On average, it was a 17% reduction in size. Patients can expect up to only a few hours of erythema. Treatments should be repeated for optimal results.

Histological results of treatment with a nonablative fractional laser have been well studied. We briefly review findings here. Directly after treatment with nonablative FP, four characteristic features are seen: (1) a columnlike denaturation of the epidermis and dermis that represents the MTZ, (2) an intact stratum corneum, with (3) subepidermal clefting, and (4) adjacent vital, unharmed tissue. This viable tissue serves as a reservoir for healing of the treated sites. Within the first 24 hours, keratinocytes from the surrounding untreated skin migrate to replace the coagulated areas of epidermis. By the end of 24 hours, the epidermis is already fully re-epithelialized and the continuity of the epidermal basal cell layer is restored.11,16 A button-shaped structure that is located below the intact stratum corneum over each MTZ and has been shown to contain necrotic tissue becomes evident as early as 1 day after FP. It therefore has been named microscopic epidermal necrotic debris (MENDs). This is a collection of coagulated dermal structures that are shuttled out of the skin. Melanin, elastic tissue, and other dermal contents can be found within this structure. These MENDs eventually get eliminated transepidermally through the stratum corneum. This process has been called the MEND-shuttle because it literally “shuttles” dermal content out of the skin. These MENDs are represented clinically by the bronzing of the skin that takes place from days 3 to 7 posttreatment. By day 7 most of these MENDS are completely shed and the skin returns to normal color. Introduction of thermal damage and coagulation of epidermis and dermis triggers the histological cascade of the wound healing process. Heat shock protein 70 is induced and collagen production is stimulated. Collagen remodeling in the dermis continues for 3 to 6 months in each MTZ site.10

The original nonablative fractional device, as noted earlier, received FDA clearance in 2003 for the coagulation of soft tissue.10 After further studies in 2004, this 1,550-nm fractional device obtained further approval for the treatment of pigmented lesions on and off the face and for periorbital wrinkles. Currently, the nonablative devices are also authorized for the treatment of melasma, acne scars, surgical scars, and actinic keratoses.

11.7 Clinical Data on Use of Nonablative Fractional Resurfacing for Photoaging

Changes associated with photoaging―including solar lentigines, actinic keratoses, dyspigmentation, poor skin texture, pore enlargement, and fine and moderate rhytids―respond well to nonablative FP. Procedures can be spaced 1 or more weeks apart and typically require several sessions. Unlike ablative laser resurfacing, which is safest used on the thicker skin of the face due to complications such as scarring and hyperpigmentation, nonablative fractional laser resurfacing can be used both on and off the face, including on the chest, back, neck, and extremities.17,18,19,20,21,22,23 In one study of 50 women with photodamage to the face, neck, and chest, 73% of women with facial photodamage and 55% of women with nonfacial photodamage experienced at least 51 to 75% clinical improvement in dyspigmentation, skin irregularities, and rhytids at 9 months as assessed by masked investigators. Three treatments spaced 3 to 4 weeks apart were given using a 1,550-nm erbium-doped fiber laser (Fraxel, Solta Medical, San Francisco, California). Facial skin was treated with a fluence of 8 mJ/cm2 and density of 250 MTZ/cm2 to a total of 2,000 MTZ/cm2. Nonfacial skin was treated with the same fluence and similar total density.23 Other investigators have found similar results with significant improvements in skin texture and rhytids of the face10,22,24; perioral rhytids22; actinic keratoses21; and skin texture and rhytids of the hands,20 back, and extremities.22 Energies and densities vary depending on the device manufacturer and the wavelength employed.