Layers of the Face

Superficial fascia or subcutaneous connective tissue contains unequal amounts of fat tissue, and these fat tissues make the facial contour smooth between the skin and underlying facial musculatures. In some areas, the fat tissues are broadly distributed. The buccal fat pad forms the bulge over the cheek and continues to the scalp behind the orbit. Facial vessels, trigeminal nerve branches, facial nerve branches, and the muscles of facial expression are contained within the subcutaneous tissue.

The superficial musculoaponeurotic system (SMAS) is the superficial fascial structure composed of muscle fibers and superficial facial fascia. This musculofascial unit is manipulated during facial cosmetic surgery, especially rhytidectomy, and the SMAS extends from the platysma to the galea aponeurotica and is continuous with the temporoparietal fascia and galea. It connects to the dermis through vertical septa.

Facial Expression Muscles and their Actions

Facial muscles are attached to the facial skeleton or membranous superficial fascia beneath the skin (Fig. 12.2). The topography of the facial muscles varies between males and females, as well as between individuals of the same sex. It is important to define muscle shapes, their associations with the skin, and their relative functionality to explain the unique expressions people can make. The face is divided into several distinct areas: (1) forehead and temporal region, (2) periorbital region covered by the eyelid, (3) external nose, (4) anterior cheek region (upper lip elevators), (5) perioral region, and (6) chin region and superficial neck.

The occipitofrontalis muscle (OFM) is the widest and largest constituent of the complex of muscles underlying the upper face and occipital area, covering from the highest nuchal line to the eyebrows, but the intensity of contractions along that width can differ substantially from person to person. The frontal belly of the OFM is the frontal portion of this muscle, and it arises from the galea aponeurotica and is inserted into the frontal skin above the eyebrow. During anxiety or surprise, this muscle contracts and produces the transverse wrinkles of the forehead.

The OFM is roughly rectangular and has bilateral symmetry; its muscle fibers are approximately vertically oriented and attached to the superficial fascia of the skin in the region where it meets the muscles above the glabella and brow ridges. Its attachment is broader and has longer fibers than the occipitalis. The OFM lies at a uniform depth beneath the skin of the forehead (3–5 mm on average), although that depth can differ considerably (2–7 mm) between individuals and is 1 mm greater on average in men than in women. The OFM does not attach to a bony structure. Instead, its medial fibers continue along procerus, intermediate fibers along the corrugator supercilii (CS) and orbicularis oculi (OOc), and lateral fibers along the OOc over the zygomatic process (Fig. 12.3). The temporoparietalis is located between OFM and the anterior and superior auricular muscles, and its development and shape vary. 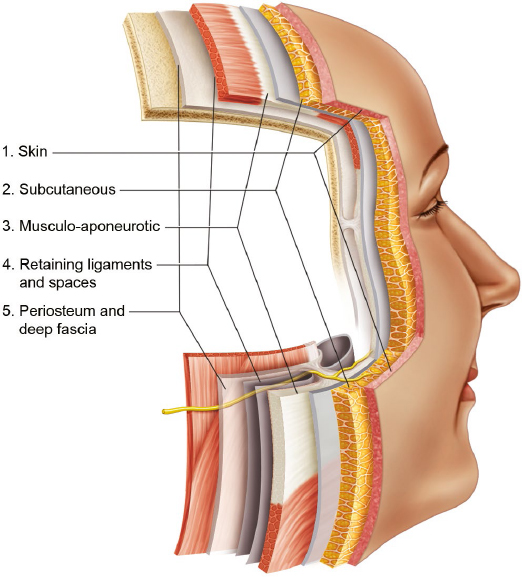 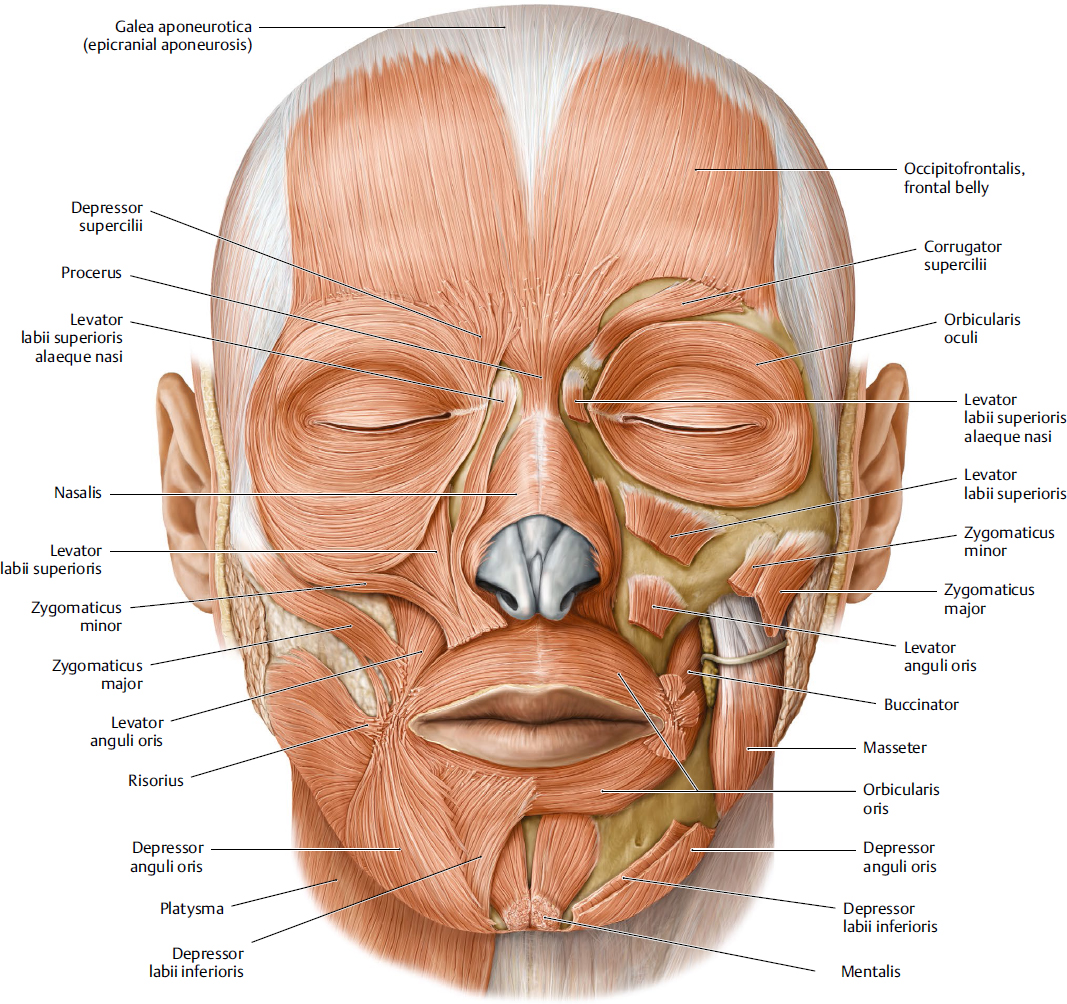 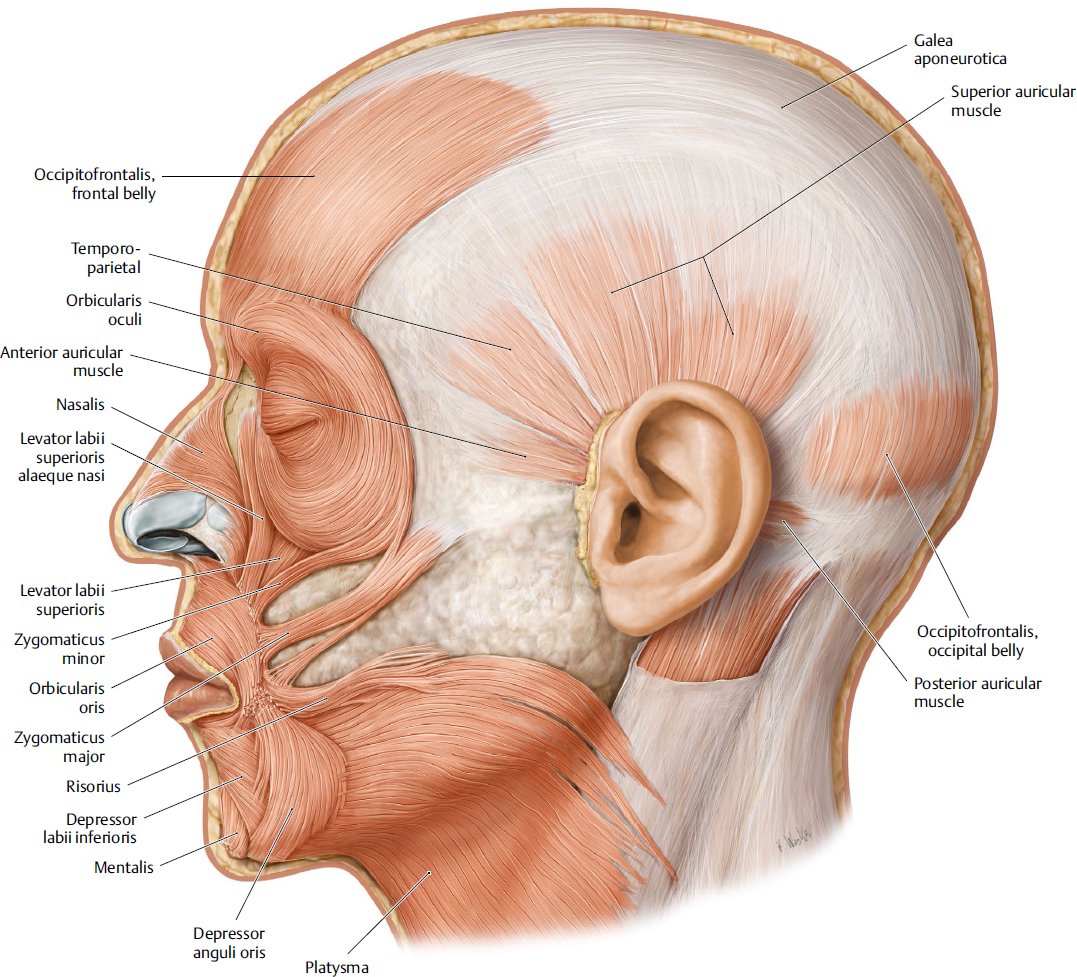 Fig. 12.2 Facial muscles. (a) Anterior view. The superficial layer of the muscle is shown on the right half of the face, and the deep layer is shown on the left half. (b) Left lateral view. (Reproduced from THIEME Atlas of Anatomy, Head and Neuroanatomy. © Thieme 2010, Illustrations by Karl Wesker.)

The shape of the eye is clearly framed by the moving muscles surrounding it, which thus determine the basic facial expression. The OOc muscle is located around the orbit and into the eyelids, anterior temporal region, infraorbital cheek, and superciliary region. The OOc is a broad, flat, elliptical muscle composed of three portions: (1) an orbital portion that concentrically encircles the orbit, including the depressor supercilii; (2) a palpebral portion, with finer and paler muscle fibers than the orbital part, that sweeps across the eyelids anterior to the orbital septum and arises from the medial palpebral ligament; and (3) a lacrimal portion that arises from the upper part of the lacrimal crest and passes laterally behind the nasolacrimal sac (Fig. 12.4).

The main function of the OOc is to mediate eye closure. The OOc has many neighboring muscles: the corrugator supercilii muscle (CSM), procerus, frontal belly of the OFM, zygomaticus major (ZMj), and zygomaticus minor (ZMi) muscles) and various direct and indirect muscular connections between the OOc and the surrounding musculature; these may participate in the formation of various facial expressions. A lateral muscular band (malaris muscle) can be observed in 54.1% of Asians. It originates from the superficial temporal fascia and terminates in three different regions: at the zygomatic arch (27.9%), at the cheek region (18%), and at the angle of the mouth (8.2%). It plays a role in facial animation and dimple formation. Medial muscular bands of the orbital portion of OOc are found in 65.6% of Asians. This muscular band helps to prevent further drooping of the OOc. On the other hand, there are many muscular connections between the OOc and ZMi in 88.5% of the cases; this particular anatomical feature may play a specific role in facial expression.

The CSM originates from the periosteum on the frontal bone and merges into the frontal belly of the occipitofrontalis muscle (Fb). The CSM consists of distinct two bellies: transverse and oblique. The origin of the transverse belly of the CSM is more superior and lateral than the origin of the oblique belly, and most are attached into the Fb and the superolateral orbital part of the OOc. The transverse belly is located more deeply and is more horizontal than the oblique belly. The transverse belly is more or less triangular in shape with its inferomedial part as the apex. The oblique belly is classified into two different types: narrow vertical or broad triangular types.1 The CSM with the OFM cause wrinkling of the skin at the glabella (Fig. 12.5).

The depressor supercilii (DS) is a fan or triangular shaped muscle that originates from the frontal process of the maxilla and the nasal portion of the frontal bone 1 cm above the medial palpebral ligament. At the glabella, DS mixes with fibers of the CS is intermingled with the medial fibers of the OOc. Some muscular fibers of the DS originate from the lacrimal sac, and it plays a role in movement of the eyebrow. 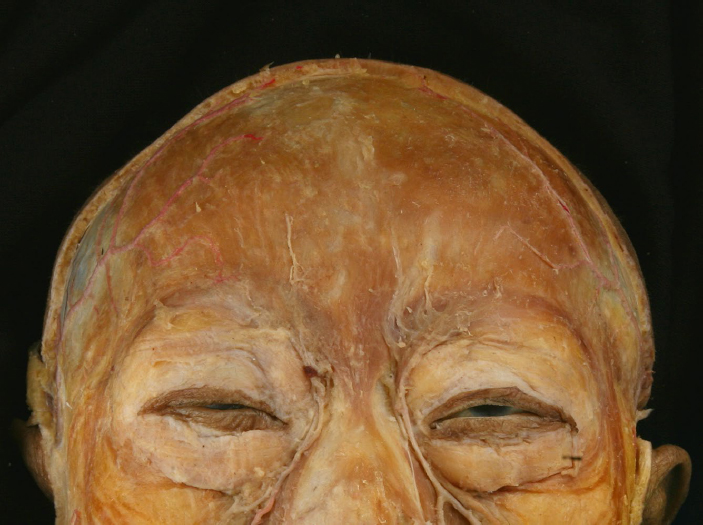 Fig. 12.3 Frontalis. The frontal belly of the occipitofrontalis muscle is the anterior portion of this muscle, and it arises from the galea aponeurotica and is inserted into the frontal skin above the eyebrow. 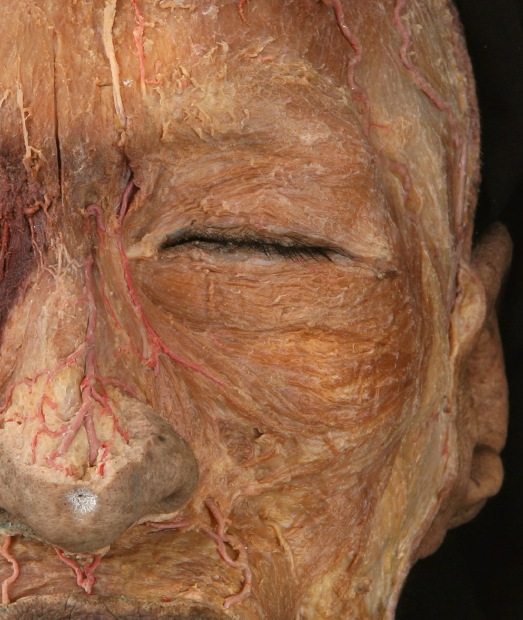