The mandible is the only bone of the lower jaw. It consists of an arch-shaped body and two quadrilateral rami (Fig. 19.1). The mandible provides support for the mandibular teeth; provides for attachment of muscles, including facial, masticatory, and infrahyoid muscles; and is the lower component for the TMJ. The bone also provides passage for the inferior alveolar nerve and vessels supplying the mandibular teeth and lower face.

The body of the mandible is U-shaped and convex anteriorly. It has external and internal surfaces and an alveolar part (tooth-bearing portion). The inferior border of the body continues with the ramus, and together they form the mandibular base.

External Surface of the Body of the Mandible

During development, half-sides of the mandible are fused by a mandibular symphysis in the midline (Fig. 19.2). A vague median ridge at the upper external surface in an adult mandible can indicate the fused site. The ridge bifurcates at the lower external surface, and the mental protuberance lies between them and is triangular-shaped. Two mental tubercles and the small central depression between them lie on the base of the mental protuberance.

The mental protuberance and tubercles constitute the chin (i.e., the mentum). The mental foramen is usually located below the interval between the premolar teeth or second premolar, approximately on the midpoint between upper and lower border of the mandible. The mental neurovascular bundle emerges from the mental foramen after passing through a canal inside the mandible (mandibular canal). The bundle emerges backward, and thus the posterior rim of the foramen is smooth, whereas the anterior rim is more distinct. The exact position of the mental foramen and the course of the neurovascular bundle within it are important during dental implant procedures.

Alveolar bone resorption resulting from tooth loss reduces supporting bone for the dental implant placement. To enhance vertical bone dimensions, the mandibular symphysis area is recommended as the donor site for the autogenous bone graft. An osteotomy should be made away from the apex of the root of the incisors. It is suggested that the surgical site of the osteotomy be located 5 mm from the dental roots.1

The cortical plate on the chin is thick further downward. Anatomical research in Asians has demonstrated that the maximum volume of graft block can be harvested from the rectangular site from the mandibular symphysis with a height of 1 to 1.5 cm and a width of 4.0 cm centered at the midline.1

Internal Surface of the Body of the Mandible

The upper border between the internal and external surfaces of the mandible forms the alveolar part, giving support for the mandibular teeth. It contains the alveoli (alveolar sockets) for seven to eight mandibular teeth on one side. The alveolar part consists of the buccal and lingual plates, which are located on the external and internal aspects of the bone, and interdental and interradicular septa, which separate each tooth and root, respectively. 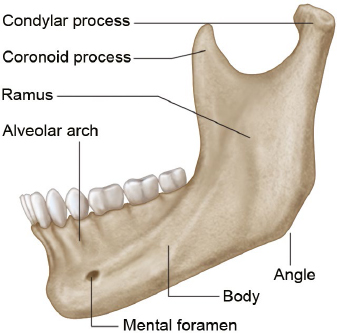 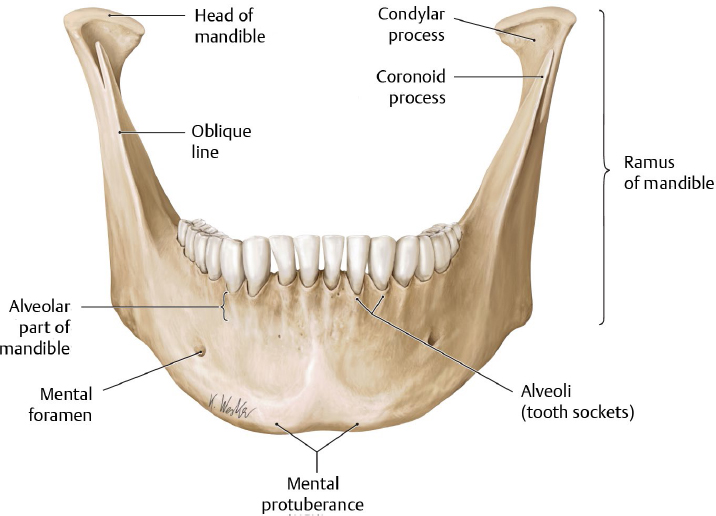 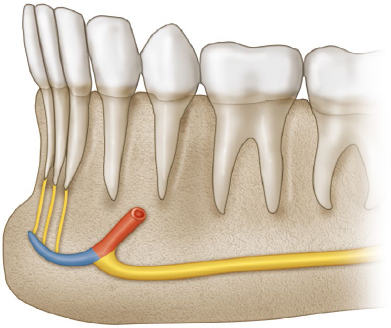 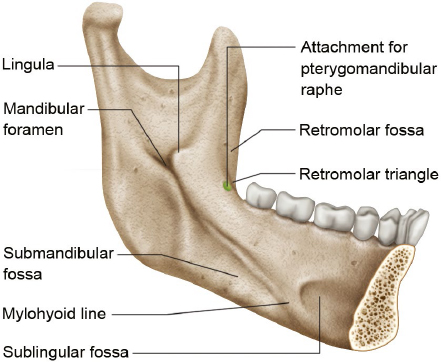 The ramus of the mandible is a broad square-shaped part extending backward and upward from behind the body (Fig. 19.5). It consists of lateral and medial surfaces, four borders (superior, inferior, anterior, and posterior), condylar, and coronoid processes. The ramus provides entrance and passage for the inferior alveolar bundle (mandibular foramen and canal), attachment for masticatory muscles, and the condylar process for articulation at the TMJ.

The lateral surface is smooth except where the masseter attaches to its lower part. The medial surface of the ramus is more complicated. The mandibular foramen, the opening of the mandibular canal, is located at the point just above a center of the ramus. The anterior portion of the foramen is partially covered by a sharp triangular spine, the lingula. The tip of the needle should be placed at the vicinity of the lingula during an inferior alveolar nerve block (Fig. 19.6). The ligula lies about 1 cm above the occlusal plane.

The external oblique ridge continues along the anterior border of the ramus on its lateral surface. From the tip of the anterior border (coronoid process), a ridge descends on the medial side of the process to the area posterior to the third molar region. This ridge, the temporal crest, constitutes a small triangular depression (retromolar fossa) with the external oblique line.

The superior border bears a sharp, triangular coronoid process and a round and claviform condylar process. The mandibular notch is an incisure with a sharp superior edge between two distinct processes. Nerve and vessels to the masseter on the lateral surface of the ramus pass though the mandibular notch.

With a thumb on the anterior border of the ramus fits on the concave line of the border, the line through the distal end of the thumbnail and the interproximal point of the two premolars on the opposite side passes through the vicinity of the mandibular foramen. This line is usually used for an inferior alveolar nerve block. 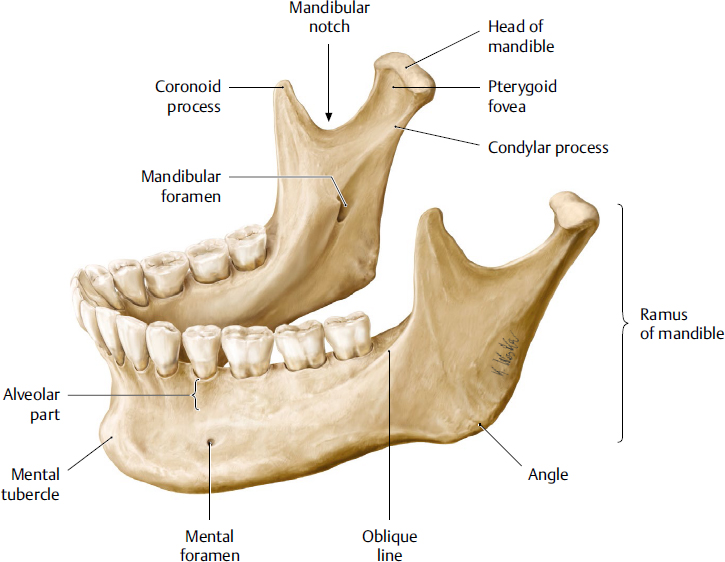 Fig. 19.5 Internal surface of ramus of mandible. (From THIEME Atlas of Anatomy, Head and Neuroanatomy. © Thieme 2010, Illustration by Karl Wesker.) 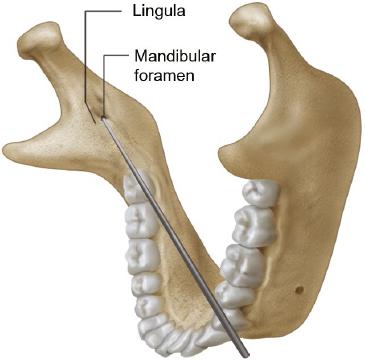 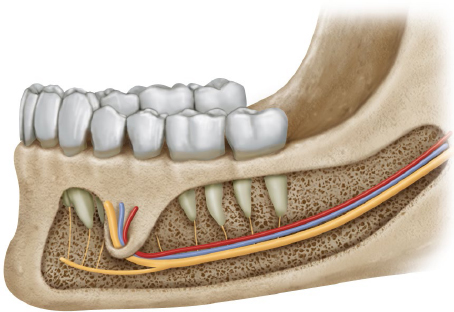 The mandibular canal is the bony canal extending from the mandibular foramen to the mental foramen. The canal runs downward and forward within the ramus then runs horizontally within the body under the tooth-bearing portion. The canal is closer to the external surface (labial cortical plate) farther forward. In the anterior end of the canal, it extends anterior to the mental foramen and curves back to the foramen, forming the anterior loop.

The neurovascular bundle from the inferior alveolar nerve and vessels to the teeth is within numerous tiny canaliculi between the canal and the alveolar part. Radiographically, the mandibular canal’s upper border is less distinct compared with its lower border.

Damage to the Mandibular Canal

The inferior alveolar nerve innervates all mandibular teeth, and the mental nerve supplies sensation of the skin and mucosa of the chin. Intrusion of an instrument or dental implant can result in a sensory disorder of the teeth distal to the injury site.1 Therefore, an injury of the inferior alveolar nerve within the mandibular canal causes partial or complete numbness of the chin area.

Additionally, the mental nerve is a branch from the inferior alveolar nerve, and its sensory component is conveyed through the buccal portion of the inferior alveolar nerve. The foramen is located below the premolars in about half the cases.2 The position of the mental foramen varies among races and individuals. Therefore, its position on radiography should be performed before surgical intervention on the premolar area.

Some surgeons try to overcome limitation of a fixture placement because of the mandibular canal by altering angulation or position of the fixture; however, some difficult situations (more than 10%) occur in which the mandibular canal follows midway or a lingual one-third passage within the mandible.1 The buccolingual position should be evaluated radiographically before intervention.

The four muscles are derived from the first pharyngeal arch and are innervated by the mandibular division of the trigeminal nerve. The maxillary artery from the external carotid artery and supplementary branches from the facial or superficial temporal arteries supply blood to the masticatory muscles. The masticatory muscles produce movements of the mandible at the TMJ; elevate the mandible (masseter, temporalis, medial pterygoid); pull down (lateral pterygoid), protrude (lateral pterygoid) and retract it (temporalis). They also act together to provide complicated side-to-side movements. Functionally, the infrahyoid muscles, including the digastric, stylohyoid, geniohyoid, and myohyoid muscles, participate in accessory mastication functions such as opening the mandible. The four masticatory muscles innervated by the mandibular nerve are commonly regarded as principal movers of the jaw.

Actually, the masseter consists of three layers; superficial, middle, and deep layers. Although the fibers of the three layers mostly pass downward and backward, detailed directions of the muscle fibers are slightly different according to the layer. The superficial layer arises from the maxillary process of the zygomatic bone and the anterior two-thirds of the zygomatic arch and inserts into the angle and its neighboring portion of the external surface of the ramus. The origin of the middle layer lies posterior to the superficial layer. The middle layer arises from the medial aspect of the anterior two-thirds of the zygomatic arch and the lower border of the posterior one-third of the arch and inserts into the central part of the ramus. The direction of the superficial layer is anterior to the middle one, and thus the superficial layer participates more in protraction of the mandible. The deep layer arises from the deep surface of the zygomatic arch and inserts into the upper part of the ramus and the coronoid process. Some parts of the middle and deep layers are involved in retraction of the mandible. The temporalis and buccinator muscles lie deep to the masseter. Most of the buccal branches, some zygomatic branches of the facial nerve, and facial vein cross over the masseter. The parotid gland overlaps the posterior part of masseter.