The eyebrows set above the superior orbital rim but slightly lower at the rim in males. The brow usually peaks at the lateral limbus. The forehead extends from the hairline to the glabella and superior orbital rim. The midface extends from the lower lids tapering medially to the nasolabial folds to encompass a triangular area. Facial mimetic muscles, those contributing to facial expression, influence brow position, and also cause skin furrows, including in the forehead, periorbital region, and midface.

The layers of the upper eyelid vary depending on the location in the eyelid (Fig. 15.2a). Anterior to the tarsus, the structures from anterior to posterior include skin, orbicularis oculi muscle, tarsus, and conjunctiva. A few millimeters above the tarsus, structures include skin, orbicularis, orbital septum, orbital fat, levator palpebrae superioris muscle, Müller muscle, and conjunctiva. The orbital septum fuses with the levator muscle about 2 to 5 mm superior to the tarsus in non-Asians and anterior to tarsus in Asians. Orbital fat descends inferiorly to fill the space between the septum and levator, which results in a fuller lid appearance.

The layers of the lower lid are similar those of the upper except that the lid retractors consist of the capsulopalpebral fascia, analogous to the levator muscle, and the inferior tarsal muscle, analogous to Müller muscle (Fig. 15.2a).

The eyelid skin is the thinnest in the body. The lid also lacks subcutaneous tissue so the skin attaches directly to the underlying orbicularis muscle. In the upper lid, the levator muscle sends fascial attachments to the overlying orbicularis and skin to create an upper lid crease. The crease is about 10 mm or 8 to 9 mm above the lid margin in females and males, respectively. In Asians, it may be closer to the lid margin or absent. The upper lid skin is continuous with that of the thicker skin of the brow. The superior sulcus is located below the brow and tends to hollow with age.

The pretarsal orbicularis oculi divides into a superficial and deep head at the medial canthus. The superficial head fuses with the medial canthal tendon (Fig. 15.4). The deep head, also known as Horner’s muscle, inserts onto the posterior lacrimal crest. Contraction pulls the lid medially and posteriorly against the globe. Laterally, the fibers from the upper and lower lids fuse into a common tendon and insert onto Whitnall’s tubercle. 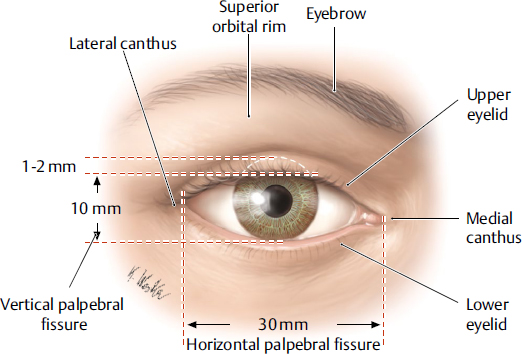 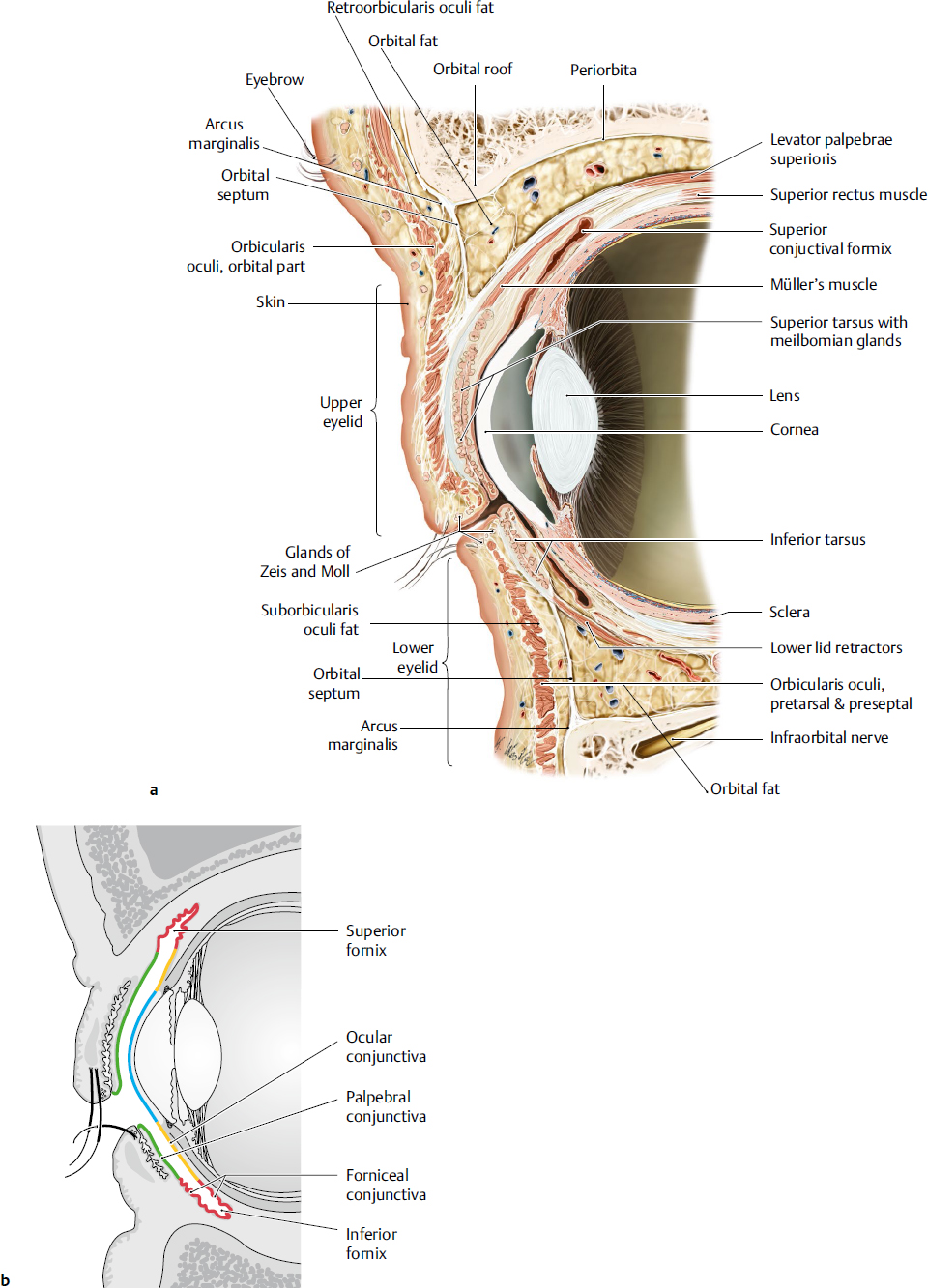 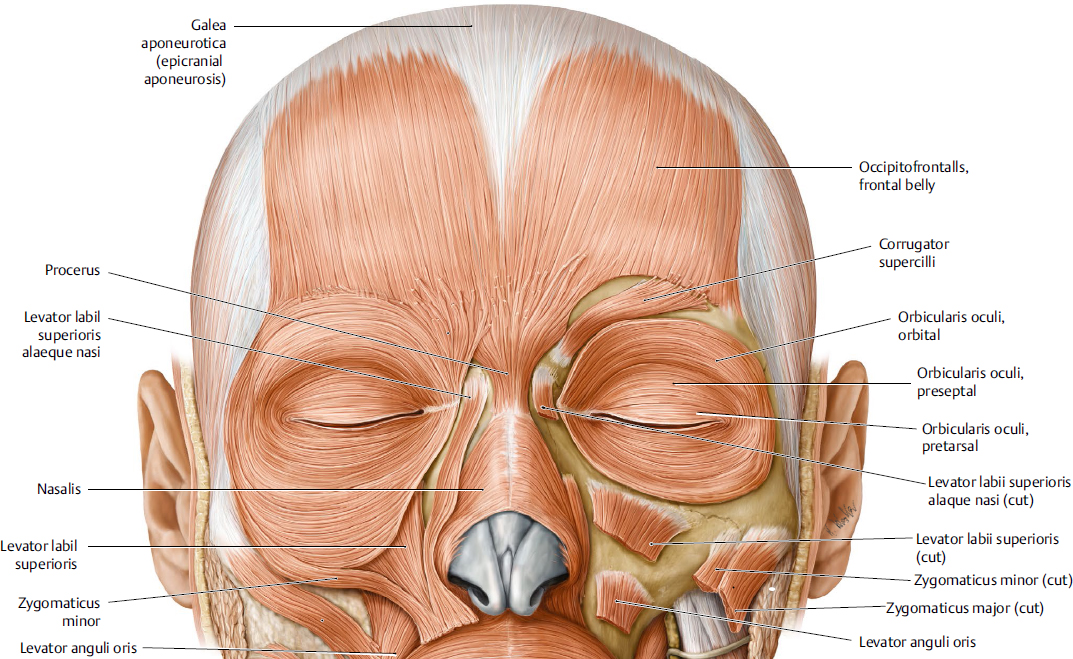 Fig. 15.3 Periorbital facial mimetic muscles. Orbicularis oculi muscle contraction results in eyelid closure. Its fibers are concentric around the eyelids. It is divided into the pretarsal, preseptal, and orbital regions. The pretarsal and preseptal orbicularis are involved in involuntary blink; the orbital portion is involved in voluntary lid closure. (Modified from THIEME Atlas of Anatomy, Head and Neuroanatomy. © Thieme 2010, Illustrations by Karl Wesker.)

The orbital orbicularis arises from the medial orbital rim, broadens outward in concentric bands superiorly and inferiorly, and joins at the lateral orbital rim to form a continuous ellipse. It extends beyond the orbital rim.

In lateral canthal anchoring (canthoplasty or canthopexy), the lid is sutured to inner aspect of the lateral orbital rim (about 10 mm posterior to the anterior rim) and slightly above the medial canthal angle. Usually the suture is secured to periosteum, but a drill hole may be helpful if the periosteal tissue is inadequate (i.e., scar). In patients with a prominent globe, the lid should be reanchored slightly more anteriorly on the inner aspect of the rim in order to avoid slipping of the lower lid under the globe.

The orbital septum is a connective tissue structure that forms from the periosteum of the orbital rim at the arcus marginalis (Fig. 15.2a). It divides the lid into anterior (skin and orbicularis) and posterior (tarsus, conjunctiva, and lid retractors) lamella.

Orbital fat, also known as preaponeurotic fat, is sandwiched between the septum and the lid retractors. As discussed in Chapter 14, there is a medial and central fat pad in the upper lid and a medial, central, and lateral fat pad in the lower lid. These fat pads can atrophy with age, creating a hollowed superior or inferior sulcus or a bulge behind a weakened septum, causing orbital fat prolapse and bulging.