Abstract
The skin completely covers the external surface of the human body representing its largest organ. It consists of two interrelated layers, the epidermis and dermis, as well as the underlying subcutaneous fatty layer. Skin vascularization is directly affiliated with the success of a flap and determines its design. Depending on the source and the pattern of the blood supply, flaps are divided into axial and random pattern. Furthermore, flaps are classified by the site of their origin, by the distance of the donor site from the recipient site, by their composition, and by the method of tissue movement.
The skin is the outer covering of the entire external surface of the human body. It is regarded as the largest organ of the body with a complicated structure that performs a great number of functions. It acts as a protective barrier preventing the internal environment against infection, trauma, ultraviolet radiation, and heat. In addition, it plays an important role in thermoregulation, stores water and fat, prevents and controls fluid loss, and constitutes the largest sensory organ.

The skin exhibits a surface area that in the adult ranges from 1.6 to 2.0 m2 with the surface area of head and neck in the adult occupying approximately the 9 %. Its thickness varies among gender, age, and anatomic location. Male skin is thicker than female skin in all anatomic regions. The skin becomes thinner in elderly individuals through changes that occur during the aging process. The thickest skin is found on the palms of the hands and soles of the feet and the thinnest on the eyelids. This depends primarily in the varying thickness of the dermis and in a lesser degree in the varying thickness of the epidermis.
Throughout the anatomic regions, the characteristics of skin vary significantly not only in thickness but also in color and in texture. All these characteristics constitute factors that have to be scrutinized when choosing the ideal donor site of a flap.
The skin consists of two interrelated layers, the epidermis and dermis, which along with the underlying subcutaneous fatty layer cover the entire body (Fig. 1.1). 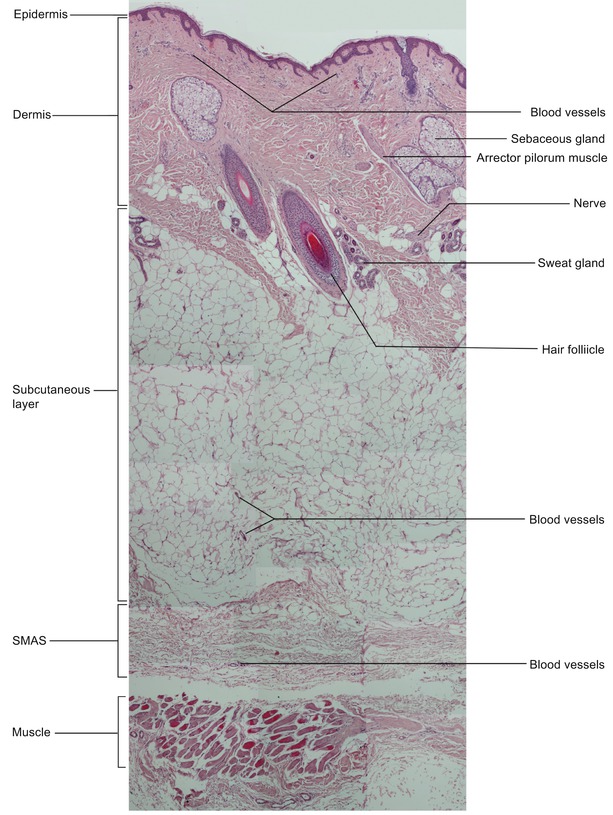 The epidermis is the outermost thin layer of the skin. Its mean thickness is 0.1 mm but varies greatly, depending upon the type of skin, age, gender, and location. At the palms of the hands and the soles, it is 1.6 mm thick, while it can become very thin like in the eyelids where it is 0.04 mm. The epidermis is a stratified squamous epithelium consisting of five distinct layers. These layers from top to the bottom are the stratum corneum, the stratum lucidum, the stratum granulosum, the stratum spinosum, and the stratum basale. The epidermis contains primarily keratinocytes in progressive stages of differentiation. Starting from the cells of the stratum basale (basal cells), new keratinocytes are formed (squamous cells), through continuous mitosis, maturate, and move up, changing shape and composition. They replace the old ones that are dead and discarded. This process is called keratinization. Specialized epidermal cells as melanocytes, Merkel cells, and Langerhans cells are also contained in the epidermis. The epidermis contains no blood vessels, and its deepest layers are nourished by diffusion from the underlying dermis.

The dermis consists of connective tissue and is tightly connected to the overlying epidermis through the basal membrane. It is much thicker than the epidermis (15–40 times) and also shows a variable thickness in different locations (e.g., 0.3 mm on the eyelid). The structural components of the dermis are primarily collagen and also elastic and reticular fibers. It is divided into a superficial region called the papillary and a deep region called the reticular dermis.
The upper papillary dermis contains a thin random arrangement of collagen fibers. The deeper reticular dermis is thicker and is made of coarse collagen fibers that are arranged parallel to the surface of the skin. The dermis contains capillaries at the papillary dermis and larger blood vessels at the reticular dermis, lymphatic vessels, hair follicles with the erector pili muscle attached to each follicle, sebaceous and sweat glands, nerve endings, and sensory receptors. Sebaceous glands are encountered over the entire body but in large concentration in the face and the scalp. Sweat glands are absent at the lip vermillion.
Hair follicles change their orientation across different ethnic groups. It is important to know the organization of hair follicles when performing incisions into the skin so as to avoid the onset of alopecia. In Caucasians, the follicles are oriented at an angle with regard to the skin surface. In Africans the follicles are more horizontal and thus run parallel to the sin surface, whereas in Asians the follicles are vertical with regard to the skin.

The subcutaneous layer (subcutis, hypodermis, panniculus adiposus), also called subcutaneous fat layer, lies below the dermis. It consists of fat (almost the half of the body fat) and connective tissue and contains larger blood vessels, lymph vessels, and nerves. This layer attaches the skin to the underlying muscles and bones, houses the large vessels and nerves that supply the skin, and plays an important role in regulating body temperature. Its thickness varies considerably from individual to individual and among the different facial areas at the same individual. It is thick at the cheeks and the neck but very thin or almost absent at the lips and the eyelids. The subcutaneous fat is divided into lobules by the fibrous septa, and in specific locations, it is sequestered in particular compartments forming the superficial fat pads (e.g., malar, submental).

Knowing the skins’ vascularization (Fig. 1.2) is crucial in the success of all flap designs due to the fact that flap survival is directly associated with adequate blood supply. The cutaneous vessels run from the underlying named vessels to the cutaneous surface as either septocutaneous or musculocutaneous arteries. The septocutaneous arteries (septocutaneous or fasciocutaneous perforators) arise directly from the underlying vessels and ascend through fascia or septa of muscles to the skin. The musculocutaneous arteries (musculocutaneous perforators) pass through the overlying muscle, and after giving small branches within the muscle mass, continue vertically to the skin. Named cutaneous vessels are direct vessels that run on top of muscles and parallel to the skin sending perpendicular branches to it. The portion of skin along with the underlying deep tissues that are supplied by a single segmental vessel, corresponding to a composite anatomic vascular territory, gave rise to the concept of angiosome that was first defined and introduced by Taylor and Palmer (1987). 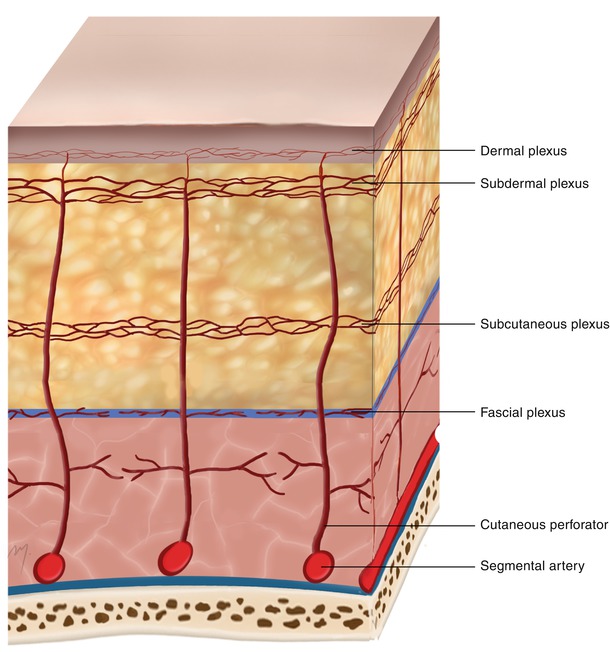 Any incision at the face that is placed within or parallel to certain skin tension lines offers the best cosmetic result and the narrowest scar line. These skin tension lines run horizontally in the midfacial zone changing to a vertical direction laterally. These lines generally run parallel to the dermal collagen bundles but perpendicular to the underlying muscle fibers.
The relaxed skin tension lines (RSTLs) (Fig. 1.3) are those skin tension lines that follow the furrows formed when the skin is relaxed, and as they are not visible, they are generated by the act of pinching the skin and observing the furrows and ridges that are formed (Borges and Alexander 1962). The lines of maximal extensibility (LMEs) represent the directions in which the skin can be advanced with the greatest ease and run perpendicular to the RSTLs. 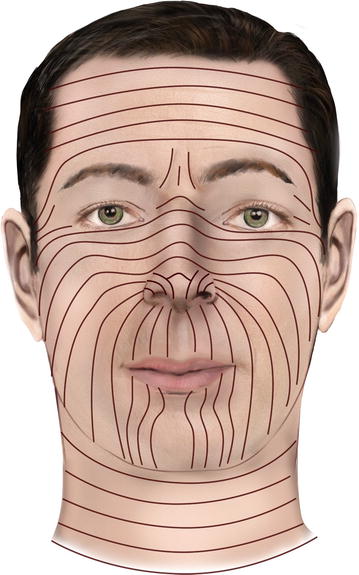 Relaxed skin tension lines (RSTLs) of the head and neck
Only gold members can continue reading. Log In or Register to continue