The pectoral and the deltoid regions constitute the donor sites of mainly two very popular regional fasciocutaneous flaps that are used in head-neck reconstruction: the cervicopectoral and the deltopectoral flaps. The anatomy relevant in the surgery of these flaps includes in layered arrangement the superficial fascia, the pectoral-deltoid fascia, and the pectoralis major and deltoid muscles.

The superficial fascia in the anterior chest wall consists of loose areolar connective and adipose tissue and is loosely connected to the skin. Depending on gender and ethnicity, the superficial fascia may consist of more than one membranous sheet of varying thickness and variable amount of fat (Abu-Hijleh et al. 2006). The superficial fascia is perforated by small blood vessels and nerves that supply the skin. It is continuous with the SMAS layer at the neck and with the corresponding layer of the upper limb (and hence the deltoid region) superiorly and with that of the abdomen inferiorly. In the chest, it encompasses the mammary gland, giving off septa that pass between its lobes. 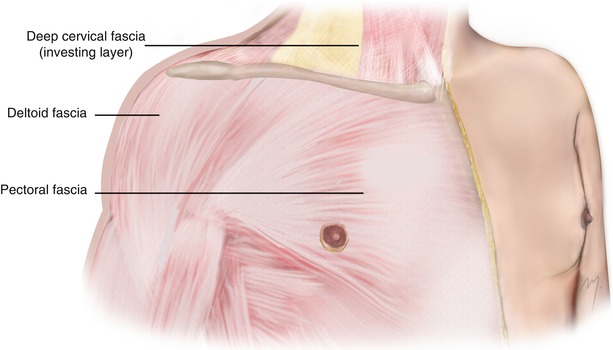 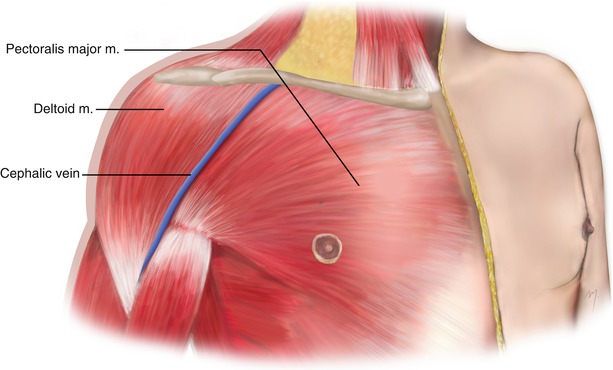 The deltoid muscle (Fig. 9.2) is one of the scapular muscles that surround the shoulder joint. It is a thick muscle, having a shape of an inverted Greek letter “delta.”
The deltoid muscle originates from the anterior border and the superior surface of the lateral third of the clavicle, the lateral margin and the superior surface of the acromion, and the lower edge of the crest of the spine of the scapula. The muscle fibers descend forming the smooth contour of the shoulder and converge to form a short tendon. The tendon formed by the converging muscle fibers inserts to the deltoid tuberosity on the lateral aspect of the humerus. The deltoid muscle receives its blood supply from the acromial and deltoid branches of the thoracoacromial artery, the anterior and the posterior circumflex humeral arteries, the subscapular artery, and the deltoid branch of the profunda brachii. The muscle is innervated by the axillary nerve (C5, C6). When acting, the anterior muscle fibers flex and rotate the arm medially, the middle fibers abduct the arm, and the posterior fibers extend and rotate the arm laterally.

9.2 Arteries Supplying the Skin of the Deltopectoral Region

The skin of the deltopectoral region is supplied by branches of the acromiothoracic, internal thoracic, and lateral thoracic arteries and by the supraclavicular artery (Fig. 9.3).

The acromiothoracic (thoracoacromial) artery is a short arterial trunk (1–1.5 cm) that arises from the anterior aspect of the second part (sometimes it arises from the first part) of the axillary artery usually 3 cm from its starting point. Its mean diameter is 2–2.5 mm. It curves around the superior margin of the tendon of the pectoralis minor muscle, pierces the clavipectoral fascia, and after its origin gives off four branches: the pectoral, the acromial, the clavicular, and the deltoid branch.
The point related to the midclavicular line where the acromiothoracic artery originates from the axillary artery differs in the left and right sides probably due to the different embryologic origins of the right and left subclavian systems (the right originated from the brachiocephalic trunk and the left from the aortic arch). In the right side, the acromiothoracic artery originates from the axillary artery in a point 2–3 cm below the clavicle and laterally to the midclavicular line, and in the left side, 2–3 cm below the clavicle and usually medial to the midclavicular line (Nakajima et al. 1997; Park et al. 2004).

The clavicular branch runs superomedially, between the clavicular part of the pectoralis major muscle and the clavipectoral fascia, and supplies the subclavius muscle.

The deltoid branch crosses pectoralis minor muscle and travels within the infraclavicular fossa in company with the cephalic vein. It supplies the pectoralis major and deltoid muscles.

This branch crosses the coracoid process and runs initially beneath the deltoid muscle, penetrates the muscle, runs over its surface, and reaches the acromion. The deltoid and the acromial branches of the acromiothoracic artery anastomose each other, and via musculocutaneous perforators and direct cutaneous branches, they supply the skin of the anterior part of the deltoid region.

The internal thoracic artery (internal mammary artery) arises from the inferior surface of the first part of the subclavian artery exactly opposite to the origin of the thyrocervical trunk. Its average diameter is approximately 3 mm. It runs inferiorly inside the chest in a parasternal plane, 1–1.5 cm lateral to the border of the sternum. It ends in the sixth intercostal space, where it divides into its terminal branches: the superior epigastric artery and the musculophrenic artery. It is accompanied by 1 or 2 veins, the internal thoracic veins, which ascend and drain into the brachiocephalic vein.
The internal thoracic artery gives off thymic branches that supply the thymus; sternal branches that supply the sternum and the medial part of the transversus thoracic muscle; the mediastinal arteries, which supply the structures of the anterior mediastinum; and the pericardiophrenic artery which travels in company with the phrenic nerve and supplies the pericardium and the perforating branches.

These are direct perforating branches that pierce through the internal intercostal muscles of the upper five or six intercostal spaces in company with the anterior cutaneous branches of the corresponding intercostal nerves and one perforating vein. They next penetrate the pectoralis major muscle comprising part of its blood supply. After penetrating the muscle, they become cutaneous, curve laterally, and supply the overlying skin. The perforator in the second intercostal space is usually the largest followed by the perforator in the third intercostal space and is termed as the “principal perforator” (Palmer and Taylor 1986). The average diameter of the second perforator has been found to measure 1.6 mm while the third perforator 1.4 mm and their lengths 9.6 and 8.7 cm, respectively (Schmidt et al. 2010).
These perforating branches of the internal thoracic artery constitute the dominant blood supply of the deltopectoral flap and of the pectoral portion of the cervicopectoral flap.

An important cutaneous artery that contributes to skin supply of the deltoid region is the supraclavicular artery, a vessel that is branched from the superficial cervical/transverse cervical artery. The supraclavicular artery after arising at the medial portion of the omoclavicular (supraclavicular) triangle courses laterally. At the angle between the anterior border of the trapezius and the superior border of the clavicle, it pierces the deep cervical fascia, crosses the clavicle, and travels subcutaneously to the deltoid region. It supplies the skin of the lateral and upper part of the deltoid region, giving off branches to the pectoralis major muscle, which, after piercing the muscle, contribute also to the supply of the upper thoracic skin.
This vessel is the main feeding vessel in the design of an axial flap that uses the skin of the deltoid region (Pallua et al. 1997; Pallua and Magnus Noah 2000; Vinh et al. 2009; Hormozi and Shafii 2010; Pallua and Wolter 2013). 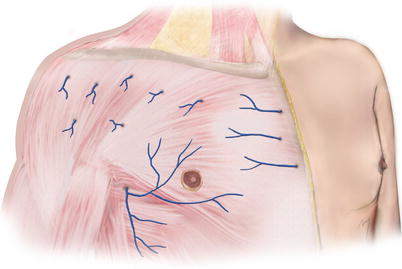 Superficial veins of the anterior thorax

Cutaneous nerves of the anterior thorax

The deltopectoral flap is designed in rectangular shape, in the upper thorax extending from the sternum in a variable degree to the anterior deltoid region. The base of the flap is situated parasternally 2 cm from the sternal edge. The superior boundary follows the clavicle, and the inferior boundary is parallel to the previous line over the 3rd or 4th intercostal space. The flap extends horizontally beyond the deltopectoral groove onto the deltoid region, in an extent depending on the needed length to reach the defect, and ends in a curvilinear distal margin (Figs. 9.6 and 9.7). 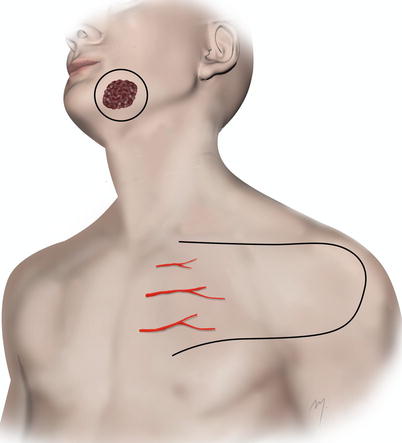 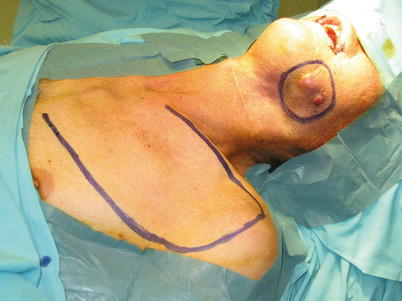 Tumor resection margins and flap are outlined
There are cases where to reach the defect the needed length of the flap compels it to extend to the lateral deltoid region and a flap delay is required at least 1 week prior to the flap harvest.

The deltopectoral receives its blood supply from the perforating vessels of the internal mammary artery with the main contribution of the 2nd and 3rd perforators in its medial part having an axial blood supply at this part (Fig. 9.6). The distal part is of random pattern, so far as the musculocutaneous perforators of the deltoid and acromial branches of the acromiothoracic artery are cut during flap elevation.