Fat grafting to the breast

Chapter 7 Fat grafting to the breast

• Fat harvesting should be done with maximum care and minimal negative pressure to prevent damage to the fat cells.

• The fat should be injected in multiple layers to prevent pooling and cyst formation.

• The use of 3D imaging will help to quantify the pre- and post-injection breast volume. This will help to measure the fat survival percentage.

• Fat harvested from different donor sites should be mixed before injection to have a similar fat cell population in both breasts.

Autologous fat grafting is a well-established technique that is practiced by many plastic surgeons. Fat cell abundance and ease of harvesting make fat grafting a logical choice for soft tissue defect restoration and augmentation. The technique of fat grafting varies from surgeon to surgeon, and there are no standardized harvesting, preparation and injection techniques.

The current popularity of fat grafting, in many ways, is because of the work done by Dr. Sydney Coleman. He popularized the technique for harvesting the fat using a handheld syringe and centrifuging for compaction.1

The need for large volume fat harvesting and injection could not be met by the current techniques due to the length of time needed to harvest fat and centrifuge the fat. The average time for harvesting, processing and injecting fat by the Coleman technique is 100 cm3 of fat in 1 hour.2

The history of fat grafting goes back to 1893 when Neuber used it for facial defects.3 In 1895, Czerney used fat grafting for chest wall deformity post mastectomy.4 The early experimentation with fat grafting was not popular because, at a time when little was known about tumescent liposuction, most fat harvesting was performed by excision. The use of tumescent liposuction has given us the ability to harvest large amounts of fat with minimal donor site morbidity.

In 1987, Mel Bircoll published his work on fat grafting to the breast.5,6 The shortcomings of his work were poor long-term follow-up and a lack of mammographic studies as indicated by letters to the editor from 1987.7 American Society of Plastic Surgeons (ASPS) published a position paper in 1987 “Deploring the use of fat injection in breast augmentation” due to the fear of interference with breast cancer detection.8 The main concern at that time was that calcification from necrotic fat would cause interference with breast tissue evaluation by mammogram. At the same time published papers stated that surgical procedures such as breast reduction,9,10 augmentation11,12 and any breast procedure can also cause calcification. Further studies indicated that calcification from fat necrosis is easily distinguished from breast cancer calcification.13–20

In 2007, ASPS and The American Society for Aesthetic plastic surgery (ASAPS) jointly and strongly supported the ongoing research efforts that would improve the safety and efficacy of the procedure21 but also cautioned against fat grafting for breast augmentation.

Handheld syringe aspiration is accepted as a gentler technique for fat harvesting. There are no published data to support this claim. We at LSU division of Plastic and Reconstructive Surgery undertook the study to find out the negative pressure that is generated by handheld syringes and liposuction machines. The graph in Fig. 7.1 shows the in-situ maximum pressure within the 1, 3, 5, 10, 30 and 60 cc syringes. Negative pressures were measured in vitro and in situ with 1, 2, 3, and 10  cc pull on a 10 cc Luer-Lock syringe as well as a conventional liposuction machine at 254 mmHg, 381 mmHg, and 762 mmHg (Figs 7.1, 7.2, and 7.3). 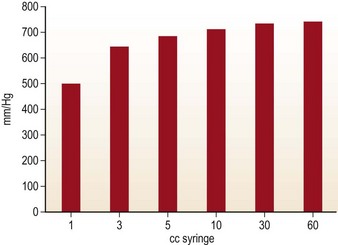 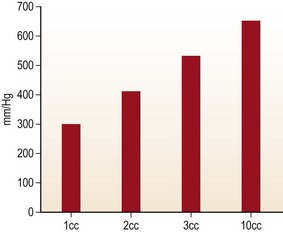 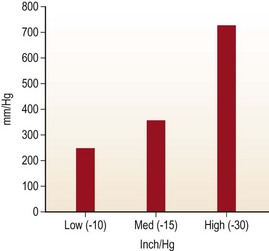 In order to evaluate the extent of damage to fat cell caused by all harvesting techniques, lipoaspirant samples were analyzed using lactate dehydrogenase (LDH) and triglyceride levels (Fig. 7.4). Glucose-3-phosphodiesterase (G3PD) assay was used to measure cell viability (Fig. 7.5). LDH and triglyceride are intracellular components and their presence in the aspiration fluid indicates cell damage and cell wall disruption. The results suggests that the samples harvested with the low negative pressure liposuction machine were lower in LDH and triglycerides. The G3PD assay suggests cell viabilities were high in samples from the low-pressure liposuction machine in comparison to the handheld syringe, which indicates more viable cells by the low pressure technique. 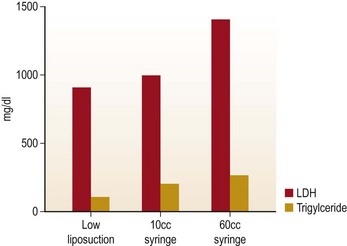 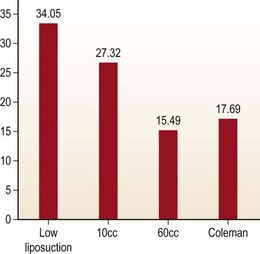 The low-pressure liposuction method removes the human factor and variation of the pull on the syringe and provides consistent negative pressure that helps to decrease operating room time and also prevents the surgeon’s hand fatigue. This technique yields large volumes of fat in a short period of time and minimizes the damage to the fat cells.

Autologous Fat Grafting to the Breast

In June 2008 at Louisiana State University Health Science Center in New Orleans, we started an IRB approved study on fat grafting to the breast. So far we have had more than 276 patients in this study and collection of the data has started for the follow up studies. Currently, fat grafting to the breast is a treatment option in conditions such as micromastia, breast ptosis, post mastectomy breast reconstruction, asymmetric breast, congenital malformation of the breast, and for treatment of complications associated with implant augmentation mammoplasty.

The solution that is used is 20 cm3 of lidocaine 1% with epinephrine, plus 2 cm3 epinephrine 1/1000 in 1 liter of lactated Ringer. The volume of tumescence is 10–20% more than the aspirate. It is imperative to wait 20 min. post infiltration to maximize vasoconstriction and minimize blood loss.

The process of centrifugation increases the risk of contamination and cell damage. One advantage of centrifugation is to compact the fat cells. Another advantage of centrifugation is the ability to separate damaged cells from intact cells. Centrifugation at a low speed for a short period (100 g/30 s) will give the same compaction as a higher speed and longer period (1400 g/3 min). Refer to Fig. 7.7. The other observation is the lack of oil on the top of the syringe with low pressure fat harvesting. This observation is consistent with our study showing that the fat cells harvested by low pressure are damaged less, and less oil leaks out. 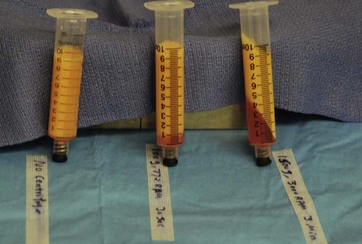 After the fat has been decanted, the fluid in the bottom of the jar is discarded and the fat cells transferred to 30 cm3 syringes and then from 30 cm3 to 10 cm3 syringes with a male-to-male connecter. Fat cells are then injected in a multilayer technique while withdrawing. Each 10 cm3 syringe will require at least five to seven passes to finish. The cannula for injection is an 11 gauge blunt tip single-side port cannula. A double-sided port causes trapping of the ligaments and clogging. Injection is started in the submuscular plane, then at the subcutaneous layer and finally, the subglandular planes. 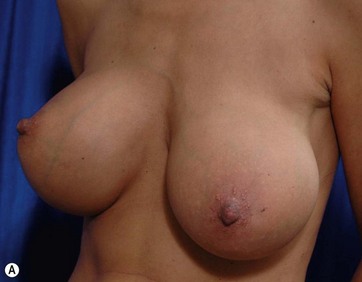 FIG. 7.8 For patients with saline implants the implants are deflated under local anesthesia 2 weeks before the planned surgery to give the tissue time to contract.

In our practice the recovery from fat grafting is fast and much less painful than with implant breast augmentation. Most patients complain more about the donor site than the breast pain. There is usually swelling that resolves in a few weeks. The breast volume will finalize at 3 months post injection. Massaging of the breast is discouraged during the first few days to prevent pooling of the fat.

Our experience with patient satisfaction has centered around long-term volume retention. Most patients are concerned about the loss of volume. The use of 3D imaging, patient education and also consistent photographic documentation is a must. Patients emphasizing the size rather than the quality of the result are not good candidates for fat grafting.