To prevent major complications and ensure animal survival, a heterotopic transplantation was performed to the inguinal region of the recipient. The left inguinal region of the recipient was shaved, prepped and draped. A skin incision was made 1 cm medial to the inguinal crease. Under an operating microscope, the femoral vessels were exposed and dissected from the inguinal ligament for microsurgical anastomosis. The femoral nerve and saphenous nerve were transected and prepared for motor and sensory nerve coaptations, respectively (Fig. 39.2). 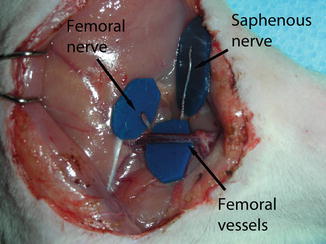 The recipient site showing the vessels and nerves

The allograft was placed in the inguinal region of the recipient and fixed with a few stay sutures before performing the anastomoses. The venous anastomosis was performed between the external jugular vein of the donor and the femoral vein of the recipient by using an end-to-end microsurgical technique. Then, an end-to-end arterial anastomosis was performed between the common carotid artery of the donor and the femoral artery of the recipient. All vascular anastomoses were performed under operating microscope magnification using 10/0 nylon sutures and the total ischemia time was kept under 45 min (Fig. 39.3). Later, epineural neurorraphies were performed between the infraorbital nerve of donor and the saphenous nerve of the recipient and between the facial nerve of the donor and the femoral nerve of the recipient with 10/0 nylon sutures (Fig. 39.4). Skin was closed using 5/0 catgut sutures. The wound was closed with great care to ensure there was no kinking or stretching of the anastomosed vessels. Also, during the final skin closure, we avoided mucosa embedment into the inguinal region of the rat. After the transplantation, recipients received 10 ml of subcutaneous lactated Ringer’s solution to compensate for perioperative fluid loss. Mucous collections from the nasal mucosa were drained daily for the first week, after which they subsided. 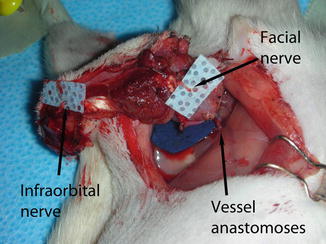 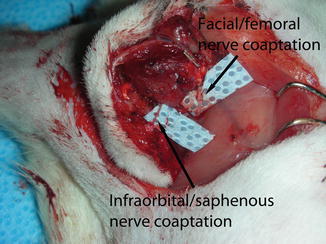 The nerve repair of the model
After allogenic transplantation, animals received cyclosporin A (CsA) monotherapy, tapered from 16 to 2 mg/kg/day over 21 days, and maintained at the same level thereafter.

Animals were evaluated in the immediate postoperative period for graft loss, arterial or venous compromise, mucous collection under the flap, hematoma or seroma formation and general health. Return of motor function was evaluated by observation of the return of movement to the mystacial pad. In addition, allografts were monitored for clinical signs of rejection, including erythema, edema, desquamation, and necrosis.

Microangiography of the allograft was performed to show the vascular structures of the graft. Briefly, a lead oxide-gelatin mixture was injected via catheterization of the common carotid artery. Then, direct radiography was obtained with a soft X-ray machine (Mammo Diagnost UC, Philips, Hamburg, Germany) set at 22 kV and 5 mAs.

To evaluate the premaxillar bone segment, recipient rats were evaluated at 100 days post-transplant by spiral-computed tomography.

SSEP analysis was performed at 100 days post-transplant for the evaluation of the sensory recovery of the composite midface allotransplant. During this evaluation, pentobarbital anesthesia was used. A Nihon Kohden Neuropack MEB-2200 Evoked Potential Electromyograms (EMG) machine (Tokyo, Japan) was used for testing. A band pass filter of 30–1,500 Hz was used and the grain was set at 3,000. The stimulus duration was 200 μs, stimulus intensity was at the motor threshold, stimulus frequency was 2.7/s, and each response was replicated at least once. A display window of 100-ms was used. The two stimulating electrodes were placed on the mystacial pad of the composite midface flap. The ground electrode was placed into the subcutaneous plane of the tail. Next, a scalp incision was made over the sagittal suture and the parasagittal regions of the parietal bones were exposed. Two burr holes were drilled on both sides of the sagittal suture and the recording electrodes were placed through these holes over the dura of the parietal cortex. The cortical responses were recorded with each average consisting of 300 trials. The waveform morphology consisted of a series of negative and positive potentials in the SSEP measurements. An initial negative wave (N1) was followed by a positive waveform (P1) and a second negative waveform (N2) in a characteristic waveform pattern. Because the P1 and N2 waveforms are the most robust and consistent potentials, these latencies were used to compare sensory recovery between different treatment groups.

For MEPs, epidural anodal stimulation was applied to both sides of the motor cortex. An electrode was inserted into the abdominal muscles and was used as reference. The stimulating intensity was carried at 18 mA of constant current with a duration of 80 μs. Anodal stimulation was performed from the contralateral motor cortex and MEPs were recorded using needle electrodes inserted into the facial animation muscles of the midface graft transplanted to the inguinal region of the recipient rat. The recording reference electrode was inserted 1 cm distal to the active electrode. A band pass filter of 100–5,000 Hz was used. For each response, peak-to-peak amplitude (μV) at a latency of 5–20 ms post-stimulus was calculated.

All transplanted grafts survived for the entire length of the study (Fig. 39.5a, b
Only gold members can continue reading. Log In or Register to continue