The mesovarium is dissected until 2–3 cm of the ovarian pedicle is cleared. At this location, the ovarian vessels measure 1–2 mm 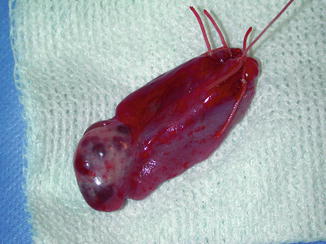 Removal of the ovary with its vascular pedicle is shown

The deep inferior epigastric vessels are prepared as recipient site vessels for revascularization of ovarian transplants. First, a vertical skin incision (4 cm) is performed on the anterior abdomen wall lateral to the anterior rectus sheath. Next, a curvilinear incision into the fascia is made and the rectus muscle is retracted medially to expose the deep inferior epigastric vessels that lie posterolateral to the rectus muscle. There are usually two veins and one artery. These vessels are meticulously prepared under microscopic magnification for microvascular anastomosis. The ovary with its vascular pedicle is reimplanted into the abdominal wall temporarily. Standard microsurgical instrumentation is used for microvascular anastomosis (Fig. 47.3). The tortuosity and small caliber of the ovarian vessels in the sheep may be technically challenging. End-to-side anastomosis may be required to alleviate the issue of vessel size discrepancy (Figs. 47.4 and 47.5). 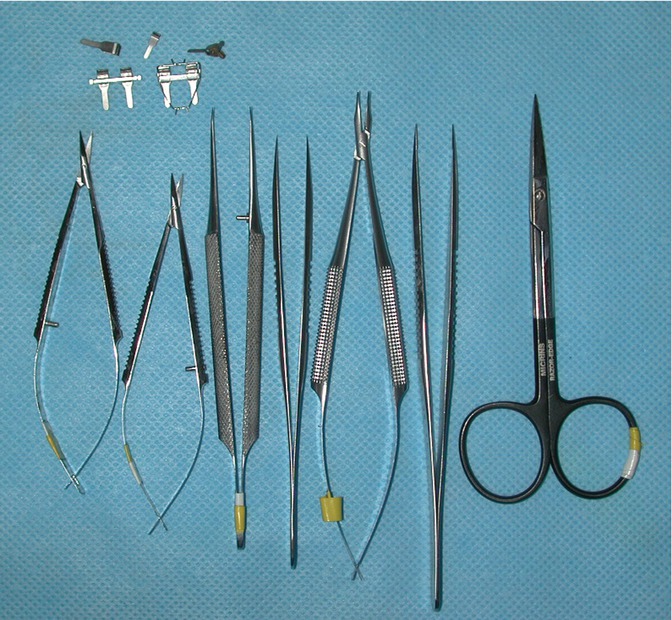 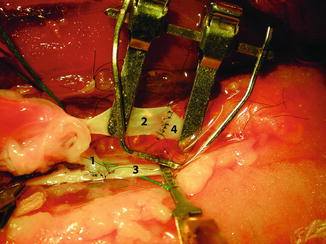 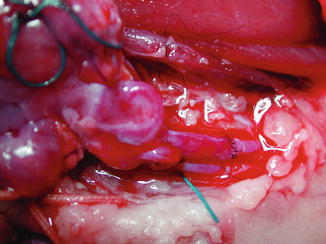 Microvascular clamps are removed and the blood flow in the venous and arterial anastomoses is documented for at least 20 min to ensure immediate patency
Eight to ten interrupted sutures with 9-0 or 10-0 Prolene (U.S. Surgical Co., Norwalk, CT) are usually required under surgical microscope for venous and arterial anastomoses (Carl Zeiss, Oberikochen, Germany). Diluted heparin and papaverine is applied as required. The site of anastomosis is inspected after removal of the microvascular clamps. Blood flow should be documented for at least 20 min. Presence of fresh tissue bleeding from the revascularized ovary confirms adequate perfusion. Finally, the ovary is fixed between bundles of the rectus muscle. The fascial opening is partially closed to ensure adequate space for the vascular pedicle of the ovary and to avoid impingement on the pedicle. Finally, the skin incision is closed primarily using non-absorbable 1-0 silk suture. A penrose drain is left in the operative site extracting distally through the incision. A light dressing using a piece of gauze is placed over the closure site (Fig. 47.6). Postoperatively, animal is given 5,000 IU of sodium heparin (Eli Lilly and Company, Indianapolis, IN) s.c., for 3 days. 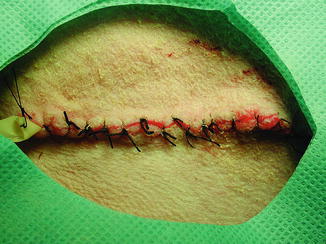 The skin incision site is closed primarily using non-absorbable 1-0 silk suture
At about 1 week after transplantation, the transplanted ovary is inspected for macroscopic appearance, presence of mature follicles, presence of pulsation distal to the arterial anastomosis, and bleeding at a small incision in the ovarian tissue (Figs. 47.7 and 47.8). In addition, serum estradiol and follicle stimulating hormone (FSH) levels, and histologic characteristics of the ovarian tissue are utilized for assessment of ovarian functions. 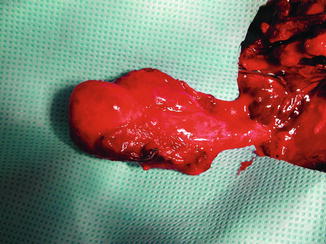 At about 1 week after transplantation, the transplanted ovary is inspected for viability after it is elevated on its vascular pedicle. Pulse at the ovarian artery distal to arterial anastomosis along with adequate venous return supports the patency of microvascular anastomoses 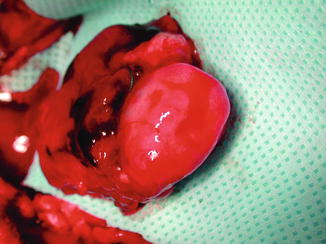 Serum Estradiol – Serum estradiol is measured quantitatively by using the Automated Chemiluminescence Immunoassay System 180 (Bayer, Tarrytown, NY).
Radioimmunoassay for FSH – A radioimmunoassay to determine ovine serum FSH levels is performed using National Institutes of Health anti-ovine FSH (A780) as an FSH antibody and A853 (ARGG) as a second antibody. The data are analyzed by using the RIANAL program. FSH is measured on the day of surgery before the procedure and 7 days after transplantation.
Histologic Characteristics – Ovarian tissue is fixed in Bouin’s solution, embedded in paraffin, and stained with hematoxylin and eosin for histologic evaluation. Primordial follicle count per high-power field, presence of primary and secondary follicles, and presence of infarction are assessed.

Serum Estradiol and FSH Levels – Comparable pre- and posttransplantation serum estradiol levels are is indicative of successful vascularized transfer of the ovary. However, this finding should be interpreted carefully since our previous study has shown that a small remnant of ovarian cortex tissue is sufficient for maintenance of estradiol production even in case of non-patent ovarian transplants [10]. Therefore, it is also essential to check the serum FSH level. No significant change in the serum FSH levels pre- and posttransplantation support preservation of ovarian function and patency of vascular anastomoses (Table 47.1).

Outcome of variables for each transplant


Reprinted with permission from Jeremias et al. [10]
Note: NA not applicable
aTransplants 5 and 6 were done in the same animal
Vascular Patency – The ovarian vessels and the deep epigastric vessels are inspected for patency. Presence of pulse at the arterial anastomosis and distally along with adequate venous return support the patency of microvascular anastomoses. These findings can be confirmed by the up-lift test using a microforceps. Fresh red bleeding at a small incision on the ovarian tissues further documents the patency of blood flow. In addition, a hand held Doppler device can be used to obtain a triphasic signal distal to the arterial anastomosis, indicative of normal blood flow, but oftentimes is not necessary.
Histologic Characteristics – No evidence of tissue necrosis is noted in the patent vascularized ovarian transplants. Depending on the phase of the menstrual cycle, mature follicles may be visible on the surface. In vascularized ovarian transplants, significantly more primordial follicles per high-power field are seen compared to ovarian transplants with non-patent vessels (Table 47.1).

Remarks on the Heterotopic Autotransplantation Model

Restoration of fertility by transplantation of intact ovary and reproductive tract in rats and rabbits has been previously demonstrated by several investigators [11–16]. With the described experimental model, the feasibility of ovarian autotransplantation with vascular anastomosis was demonstrated in a large animal for the first time in literature. The abdominal wall was a favorable site for autotransplantation procedures in the sheep: It was clinically accessible, and the branches of the deep inferior epigastric vessels were suitable for vascular anastomosis to ovarian vessels. The sheep ovary has been an accepted model in reproductive endocrinology due to similarities to human ovaries such as dense fibrous stroma and relatively high primordial follicle in the ovarian cortex. Ovarian transplants have proved minimal loss of ovarian tissue, relatively high primordial follicle count, and resumption of hormonal function when successful revascularized.
Thus, the vascularized ovarian transplantation model may be a worthwhile alternative to current ovarian tissue banking and grafting techniques for preserving ovarian function and fertility in patients at risk for premature ovarian failure. The technique, however, would require cryopreservation protocols of an intact ovary with its vasculature until the ovarian tissue is revascularized.

We had also investigated the feasibility of cryopreservation and autotransplantation of intact sheep ovary with vascular anastomosis [17, 18]. The findings in cryopreserved and vascularized ovarian transplants were compared with transplantation of frozen-thawed ovarian cortical strips without vascular anastomosis [17
Only gold members can continue reading. Log In or Register to continue