Those who have used lasers in their medical training and practices will be able to relate to my thoughts the first time I used a laser: “How did anyone ever think of using light in such an extraordinary fashion?” Thankfully, as in many other aspects of our practices, we are the beneficiaries of the genius minds that came before us. We are fortunate to “stand on the shoulders of giants!”

Several decades ago the laser was used in science fiction as a death-ray machine. Today the laser has evolved to be a most useful tool in aesthetic medicine. Almost 60 years before the first actual laser was built, Albert Einstein developed the early theories essential to the development of the laser. His 1917 paper, “Zur Quantentheorie der Strahlung,” was the first to discuss stimulated emission.1 Gordon, Zeiger, and Townes built the first microwave laser, called a maser, in 1954.2 The first theoretical calculations for a visible light laser were published by Schawlow and Townes at Bell Laboratories in 1958.3

The first laser used a ruby crystal and a lamp that produced weak flashes of red light. In 1960 Theodore Maiman at Hughes Aircraft made this first laser with pulses of light in the red spectrum at 694 nm.4 Commercial lasers became available a year later. In 1961 a prototype ruby laser was the first laser used on a patient; it was used to destroy a retinal tumor. As lasers developed, medical experts considered further how lasers could help in patient care, particularly for surgical applications. Lasers quickly went from the laboratory to clinical use, with practitioners keeping in mind the potential occupational hazards, rather than repeating Madame Curie’s slow realization of radiation hazards from radiographs (poor Madame Curie’s hands!).

The expansion of laser use from ophthalmology to other medical fields was pioneered by Leon Goldman. In 1963 Goldman and colleagues described the pathological effects of the laser beam on the skin.5 These authors also considered the potential use of lasers in medicine.

The carbon dioxide (CO2) laser was developed in 1964 by Patel and coworkers;6 however, it was not until 1968 when Polanyi7 developed the articulated arm that more diverse specialized medical applications were possible. The CO2 laser consists of a sealed tube of helium, nitrogen, and carbon dioxide gases. The gaseous mixture, called the gain medium, is stimulated either by high-voltage currents or radiofrequency discharge to produce an invisible infrared beam of 10,600-nm energy.8 An “aiming” helium-neon laser that produces red light is used in conjunction with the CO2 laser.

CO2 laser ablation occurs when 10,600-nm energy is absorbed by tissue water, resulting in the production of heat and an ablative thermal effect. Once the temperature rises above 100°C, water in the tissue vaporizes. The steam expands and further tears open the tissue. Early medical lasers were used as light scalpels because they had simultaneous cutting and cauterizing capabilities. The early CO2 lasers were continuous wave with a constant beam of energy delivered to the tissue. The CO2 laser was used in head and neck surgery for tissue ablation, creating intense localized heat to effect vaporization of intracellular and extracellular water, leading to coagulative necrosis. Collateral heating of the zone adjacent to the area of vaporization is unique to CO2 laser wounds. Otolaryngology was the first surgical specialty in which the CO2 laser characteristics were recognized and successfully applied to large-scale clinical situations.

The ablative CO2 laser held great promise as an aesthetic tool because of its unique ablative and thermal wound characteristics. It was not until the principle of selective photothermolysis was reported9 that manufacturers began to develop lasers that reduced thermal injury by delivering energy in a series of short, repetitive bursts rather than a continuous, uninterrupted beam. When energy was delivered in pulses the lasered tissue had time to cool between pulses, a feature that gave rise to the use of CO2 lasers for facial cosmetic applications.

During the 1990s these pulsed, ablative CO2 lasers became very popular for skin resurfacing. Two CO2 laser systems specifically designed for skin resurfacing were the Ultrapulse (Coherent Inc., Palo Alto, California) and the Silktouch (Sharplan Lasers Inc., Allendale, New Jersey). David and associates10 were the first to report using the CO2 laser for cosmetic correction of facial actinic damage, later expanding its use for purely cosmetic correction of surface wrinkling in the face and hands. The development of more sophisticated handpieces allowed the laser beam to be applied to human skin in many preprogrammed patterns and in a much shorter duration that prevented hot spots and bulk heating. Continuous wave lasers controlled depth of injury by the number of passes performed on a single area.

The rationale behind ablative CO2 laser use for skin resurfacing is that it is still considered the best device for the correction of facial rhytids and remains the gold standard for facial skin resurfacing (▶ Fig. 4.1 and ▶ Fig. 4.2). It was extremely popular in the 1990s but, due to the very long healing times, prolonged erythema, lines of demarcation, and scarring, its use declined except in the hands of experienced and skillful surgeons. 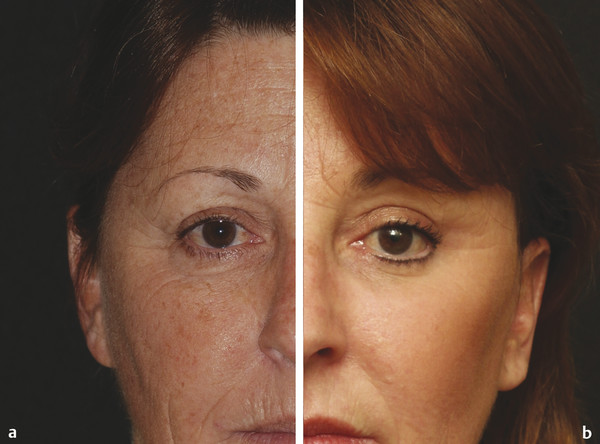 Fig. 4.1 (a, b) A 54-year-old woman who underwent fully ablative laser resurfacing with Lumenis ultrapulse CO2 laser. She was treated at 100 millijoules (mJ), density of 5, at 250 Hz. The neck was treated at 80 mJ, density of 3, at 250 Hz. Note significant improvement in tone and texture with moderate wrinkle reduction. 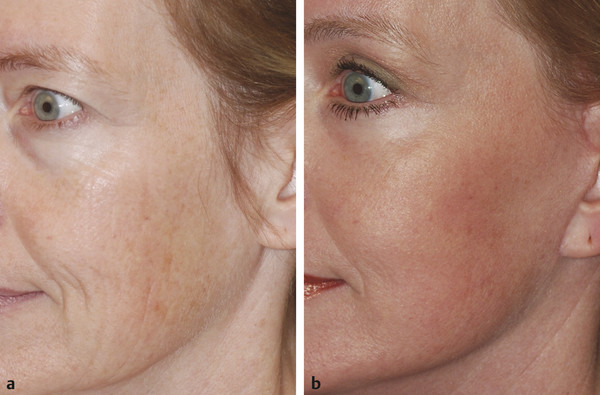 Knowledge of skin microanatomy, histology, physiology, and function are essential in all laser resurfacing procedures, particularly when using ablative CO2 lasers. Skin is a dynamic organ and is continuously changing throughout life; outer layers are shed and replaced by inner layers. Skin also varies in thickness with age, anatomical location, and the gender of the individual. Skin consists of two layers (▶ Fig. 4.3), the epidermis and dermis, which lie above the fatty subcutaneous layer, the panniculus adiposus. The epidermis has pigment-containing melanocytes and does not contain any blood vessels. The dermis contains elastic fibers, collagen, blood vessels, nerves, and fibroblasts. The dermis has two layers, the more superficial papillary dermis, and the deeper reticular dermis. 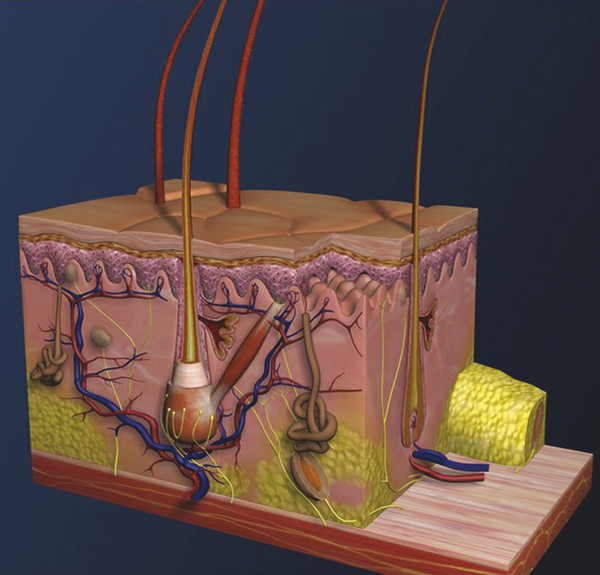 Knowledge of the relative skin depth and thickness in various parts of the face is valuable to ensure that the laser does not penetrate too deeply, which could result in unnecessary skin injury and other complications. Histological studies of human skin11 show that facial skin epidermis (forehead, nose, cheeks, chin) varies in depth from 110 to 126 μm (mean 120.2), whereas depth of the papillary dermis is more variable (75–110 μm, mean 94.2). The reticular dermis is deeper (mean 1,980 μm) and facial areas are less variable (range 1700–2100 μm). Facial skin thicknesses, the sums of epidermal and dermal depths, range from 1,915 μm in the forehead to 2,360 μm in the medial cheek. The upper, middle, and lower neck skins are thinner (1,690, 1,552, and 1,330 μm, respectively) and more depleted of adnexa. Epidermal depths of the upper, middle, and lower neck areas are 115, 75, and 70 μm, respectively. The eyelids have much thinner skin, at 502 and 497 μm for the upper and lower eyelids, respectively.

When using ablative CO2 lasers, it is essential that the laser operator is well aware of the depth of the laser effect. For many years the depth of penetration was visually assessed by the color of the treated area. Pink-lasered skin indicates epidermis; gray denotes papillary dermis; a yellow color reflects the reticular dermis. The absolute end point of the most aggressive ablative laser treatment is the yellowish, chamois-cloth color. In order to avoid permanent scarring, laser surgeons should not proceed with further laser passes once the chamois appearance is present.

These early techniques of visually inspecting the skin during the treatment were likely among the causes of complications related to CO2 resurfacing. Although clinical results were often outstanding, patients frequently endured several months of erythema, which frequently led to permanent hypopigmentation. Most laser companies now provide a depth of injury guide with a diagram identifying the depth of ablative and thermal injury so the treating physician can precisely plan and manage the level of injury. This advance in the treatment of patients in the authors’ opinion has significantly reduced the incidence of complications.

Reduction of wrinkles and improvement of tone and texture are the most common indications for ablative CO2 laser resurfacing. The fully ablative CO2 laser is, after 20 years, still considered the gold standard by which all skin rejuvenation procedures are judged. Creating treatment protocols allows safe, fully ablative treatments and yields substantially better results than other treatment options. The versatility of the CO2 device allows for fully ablative treatment options that significantly reduce the degree of wrinkles in a pan-facial manner. The laser can also be used more elegantly to simply remove a portion of the epidermis that will heal in 3 to 5 days (a “light CO2 ablative peel”).

There has been a significant resurgence in the use of the CO2 laser in the treatment of postsurgical scars and, most recently, burn scars and scars related to battlefield wounds.13 Ablative and nonablative lasers have demonstrated a resetting of the wound healing processes at a molecular level that involves matrix metalloproteinase, transforming growth factor-beta (TGF-β1), and messenger ribonucleic acid (mRNA) for collagen synthesis.13,14

The treatment of acne scars has received additional attention with the development of deep fractional CO2 lasers. The combination of both a deep fractional treatment with a more superficial fully ablative treatment in the authors’ experience has significantly improved outcomes. Fat grafting and subcision have also been combined simultaneously.12 ▶ Fig. 4.4 shows a patient who underwent fat grafting in combination with CO2 laser resurfacing. 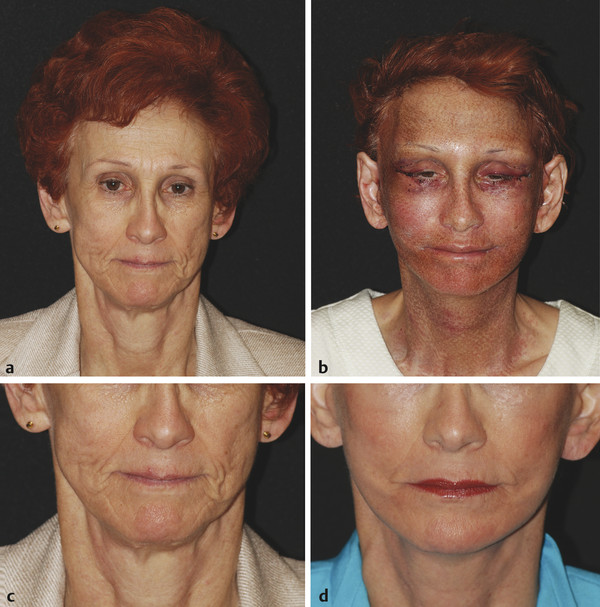