The advent of immunofluorescence in the 1960s gave dermatologists a very accurate diagnostic tool for distinguishing between the bullous dermatoses [18]. Van der Meer in 1969 [4] demonstrated that the IgA deposits were present in the dermal papillae of uninvolved skin in a patient with DH. This distinguished the disease from bullous pemphigoid, in which the deposits are of IgG class and distributed along the basement membrane, and from pemphigus, in which the deposits of IgG are within the epidermis. It also established an immunological basis to the pathogenesis of the disease.

Chorzelski et al. [18] were the first to show that there are different patterns of IgA deposits – a granular pattern in the dermal papillae (Fig. 90.2) and a homogeneous pattern along the basement membrane zone. These patterns represent two separate diseases – DH and linear IgA bullous dermatosis of childhood respectively. The latter is not related to gluten sensitivity. 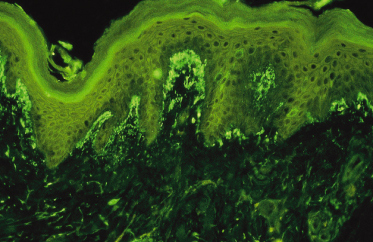 It is not known which structure the IgA binds to in the skin. Initial studies that compared the pattern of immunofluorescence of IgA with the pattern produced by silver stains indicated that the IgA was bound to reticulin – a structural protein related to collagen [19]. Although more sophisticated techniques applied to the localization of the IgA suggest this to be elastin, they have not fully elucidated the precise structure to which the IgA is bound [20–22]. However, the finding of antireticulin antibodies in a series of patients with DH suggested that the IgA deposits might represent an autoantibody to reticulin, giving an aetiological parallel with bullous pemphigoid and pemphigus, in which circulating antoantibodies have been demonstrated. However, further studies show the majority of antireticulin antibodies to be of IgG class, and their titres are related to the severity of the underlying enteropathy rather than to the activity of the rash [23].

The associated GSE and presence of gluten in the serum of patients with DH [24] have given rise to speculation that antibodies to gluten may play a role in the pathogenesis of DH. This speculation was heightened when in vitro studies demonstrated that gliadin could bind directly to reticulin [25] in a lectin-like manner [26]. Further interest arose when it was shown that the IgA in DH skin contained J chain [27] and was able to bind secretory component, showing it to be dimeric, which would be consistent with an origin from the mucous surface of the gut. The suggestion arose that a gliadin–antigliadin immune complex was formed in the gut and circulated to the skin, where it could bind to reticulin through the gliadin component. This would account for the IgA deposits, and the subsequent activation of the complement cascade [28] would give rise to the inflammatory lesions of DH.

In spite of many studies demonstrating the presence of immune complexes in patients with DH [29–31], none has identified the constituents of the complex in detail, although Unsworth et al. [32] did demonstrate the presence of antigliadin activity in complexes. Furthermore, Unsworth et al. [32] found that all untreated patients with coeliac disease have antigliadin antibodies, and the titres of these reflected the severity of the gut pathology. The presence of antigliadin antibodies, particularly of IgA class, provides a useful screening test for associated GSE [33].

In 1983, Chorzelski et al. [34] described a circulating antibody to the reticular component of the endomysium with smooth muscle. These were of IgA class and referred to as IgA antiendomysial antibodies. The presence of the antibodies was related to the GSE regardless of the presence of the skin lesions, and it is the most sensitive screening test for the presence of GSE in patients with DH [35–37]. The endomysial autoantigen has been identified as tissue transglutaminase for which gliadin is the preferred substrate [38].

Dermatitis herpetiformis is extremely rare in patients without some Caucasian ancestry. This observation has been supported by the very high incidence of certain histocompatibility antigens in patients with DH. Most notably, there is a high incidence of HLA-B8, HLA-DR3 and HLA-DQw2 [39–47]. Although the presence of HLA-B8, HLA-DR3 and HLA-DQw2 will predispose to gluten sensitivity, other factors are clearly important in the clinical expression of the disease. It is of interest that Reunala & Maki [48] described two identical twins, one of whom developed DH and one coeliac disease.

This immunogenetic association underlies the strong autoimmune nature of DH and the predisposition of patients with DH to autoimmune diseases. It makes it all the more surprising that no target-specific autoantibody to account for the disease has been discovered. Although it may not explain the aetiology of the rash, the association of autoimmunity with DH is of importance [49]. About half of patients with DH have target-specific autoantibodies. The most commonly found are against the thyroid gland and gastric parietal cells of the stomach [50–52]. Patients with these antibodies must be screened for the associated diseases. Juvenile-onset diabetes, chronic active hepatitis and systemic lupus are all more common in patients with DH. 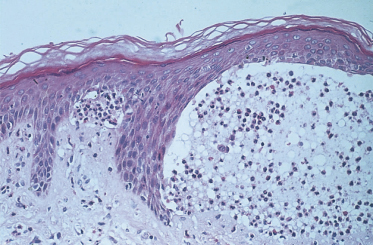 A more accurate diagnostic tool came with the advent of immunofluorescence in the 1960s. The presence of IgA deposits in the dermal papillae is now regarded as the diagnostic hallmark of the disease [56,57]. Other immunoglobulins are present but in a lower incidence. Chorzelski et al. [18] found that IgG was present in six of 19 biopsies and IgM in five of 19; Seah et al. [58] and Fry & Seah [59] found C3 to be present in 47% of biopsies. The pattern of immunofluorescence is the same in all immunoglobulin classes. The significance of immunoglobulin deposition in DH is not known. Even IgA does not appear to be directly implicated in the pathogenic mechanism of blister formation. It may just be a so-called epiphenomenon, but it acts as the most important diagnostic marker for the disease [60]. One study has shown that neutrophils from patients with active DH show evidence of priming and increased ability to bind to IgA, which may explain their localization in the papillary dermis of patients [61].

It is rare for DH to present before the age of 2 years. This is presumably because patients are not exposed to gluten until after weaning. The range of presentation in a group of 57 children reported by Reunala et al. [16] was from 2 to 16 years, with a mean age of 7 years.

Females are more commonly affected when DH presents in childhood [16]. This contrasts with adulthood, in which males are affected about twice as often as females.

The classic distribution of the rash of DH is symmetrical involvement of the extensor aspects of the elbows, knees and buttocks. However, about 10% of patients present with an atypical distribution – no part of the skin is immune from involvement though the face and oral mucosa are rarely affected.

Morphology of the Rash

The earliest lesions are urticated papules. These tend to form clusters and develop small vesicles, giving rise to the herpetiform appearance (Fig. 90.4). As the lesions mature, larger vesicles develop but they are intensely itchy and are usually scratched, giving rise to excoriated papules rather than large bullae. As the areas of involvement become chronic, lichenification may occur from the persistent scratching. A patient has been reported with non-pruritic inflammatory papules on the buttocks and extensor surfaces [62].

Fig. 90.4 Clusters of urticated papules and vesicles on the knees of a child with dermatitis herpetiformis. 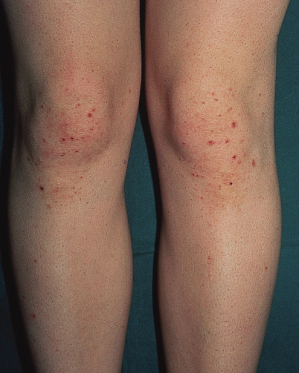 The rash of DH may vary significantly in intensity and go through prolonged periods of spontaneous quiescence before returning. Sensitivity to iodides was noted in the 19th century, and the potassium iodide patch test was used as a diagnostic test for many years [63]. Application of iodide to uninvolved skin will induce a lesion that is histologically indistinguishable from a spontaneous one. Care must be taken to avoid application of iodides to children with DH.

In the study by Reunala et al. [16], eight out of 57 children with DH (16%) presented with chronic diarrhoea and five had anaemia, suggesting clinical involvement with coeliac disease. Of the 57 children, 35 (61%) had subtotal villous atrophy, 16 (28%) had partial villous atrophy, three (5%) had slight changes of a gluten-sensitive enteropathy with a raised intraepithelial lymphocyte count and three patients had normal mucosa.

Reunala et al. [16] pointed out that the jejunal disease in children with DH was similar to that found in coeliac disease in both morphology and response to a gluten-free diet. However, they clearly differed in the severity of the disease and frequency of symptoms of malabsorption. Only 16% of their children had diarrhoea at the time of examination, and a previous history of diarrhoea was even rarer. Compared with childhood coeliac disease, the minimal symptoms of malabsorption in DH may be due to the patchy mucosal involvement previously noted in adults. Reunala et al. also observed that children with DH were older at the time of presentation than those with coeliac disease. Short stature was not a feature of the DH children, once again emphasizing the relative mildness of the severity of the enteropathy in patients with DH compared with coeliac disease.