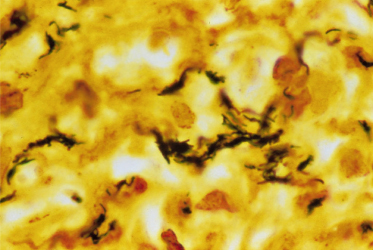 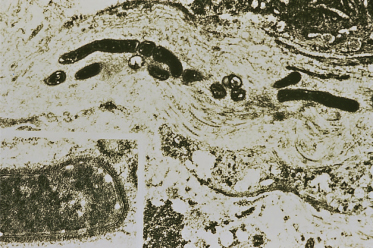 Most reported cases of bacillary angiomatosis describe lesions that are dermal or subcutaneous. Lesions may be solitary or multiple and may even number more than 1000. Initially, lesions are usually small, red-to-purple pinpoint papules, which can evolve into vascular-appearing nodules and tumours that may bleed profusely with trauma (Fig. 58.4). The surface may be smooth or ulcerated with crusting. Often, individual lesions resemble pyogenic granulomas. Subcutaneous lesions are deeper seated skin-coloured or dusky nodules that may be freely mobile or fixed to underlying structures. These nodules are often tender and may exhibit some overlying skin changes, resembling cellulitis. Additional descriptions include plaque-like lesions and a suppurative ulcer. The few case reports of bacillary angiomatosis in children were isolated lesions described as a crusted and ulcerated violaceous nodule, a crusted erythematous papule and a red papular lesion (Fig. 58.5) [12,14,16]. Constitutional symptoms including fever, chills, malaise, headache and anorexia with or without weight loss may be present.

Fig. 58.4 Smooth-surfaced vascular nodule with peripheral scale in a child with bacillary angiomatosis and AIDS. 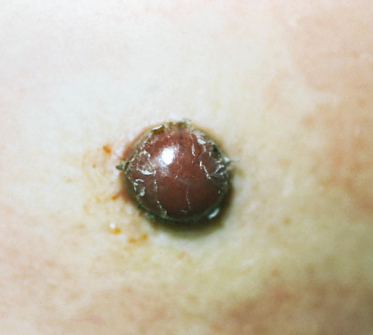 Fig. 58.5 Violaceous papule with ulceration and crusting in a child with bacillary angiomatosis and immunosuppression from chemotherapy for leukaemia. 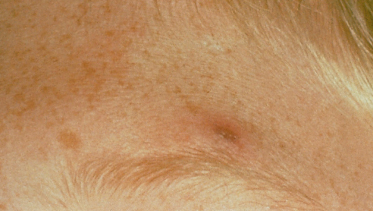 Hepatic involvement in patients with Bartonella infection may present as blood-filled cystic spaces [5]. Peliosis may present as an isolated condition or in association with cutaneous and extracutaneous bacillary angiomatosis. Accompanying signs and symptoms include nausea, vomiting, diarrhoea, abdominal distension, fever, chills and hepatosplenomegaly. Thrombocytopenia or pancytopenia can develop in patients with peliosis hepatitis and splenitis. Splenitis may occur as an acute necrotizing inflammatory response without evidence of angiomatosis.

Some patients with Bartonella infection develop a symptom complex of malaise, fatigue, anorexia, weight loss and recurring progressive fevers with eventual isolation of the organism in blood cultures [4,7]. In these patients, there is no obvious site of focal infection.

All patients with bacillary angiomatosis should be treated promptly because of the potential morbidity and mortality associated with untreated progressive disease. Appropriate antibiotic therapy usually leads to resolution of the potentially disfiguring cutaneous lesions and visceral disease, including bone lytic lesions. Even when the therapy is prolonged, recurrent disease can occur after successful treatment. It is not known whether this represents relapse or reinfection.

The diagnosis of cutaneous bacillary angiomatosis is most often made by suggestive clinical features combined with histological confirmation. Blood cultures should be performed, as both B. henselae and B. quintana can be isolated from blood using paediatric or adult isolator tubes or tubes containing ethylenediaminetetra-acetic acid (EDTA). Both organisms can also be isolated from cutaneous tissue by co-cultivation with an endothelial cell monolayer [8]. Furthermore, Bartonella DNA from tissue or blood can be amplified by polymerase chain reaction (PCR). Indirect fluorescence assay (IFA) and enzyme immunosorbent assay (EIA) have been tested for serological diagnosis of B. henselae and B. quintana. Difficulties with the IFA test include significant cross-reactivity between B. henselae and B. quintana immunoglobulin G (IgG) assays, suboptimal sensitivity and false-positive tests due to a 4–6% prevalence of positive Bartonella serology in the general population. Although serological studies are traditionally available in the USA through the Centers for Disease Control and Prevention or through a commercially available IFA test, positive results must be interpreted with respect to the clinical context and should not be used as the sole method of diagnosis [21].

The differential diagnosis of the cutaneous lesions of bacillary angiomatosis includes infectious and non-infectious entities [22]. The non-infectious disorders include pyogenic granuloma, cherry angioma, dermatofibroma and haemangioma. Distinguishing solitary lesions and pyogenic granuloma can be difficult clinically and may require biopsy for diagnosis. Kaposi sarcoma is an important infectious disease to distinguish from bacillary angiomatosis as they are both more common in the immunocompromised patient setting. Given the rarity of Kaposi sarcoma in children, Kaposi-like lesions should be biopsied in this population of patients. In addition, the absence of macules, patches and plaques in most cases distinguishes bacillary angiomatosis from Kaposi sarcoma, but the diseases can occur simultaneously.

With respect to other infectious diseases, bacillary angiomatosis is most similar to bartonellosis, but infection with B. bacilliformis occurs almost entirely in endemic areas of Peru. The nodular and plaque forms of bacillary angiomatosis may need to be differentiated from other deep mycobacterial and fungal infections that can present similarly, including atypical Mycobacterium infections, tuberculosis, coccidioidomycosis, cryptococcosis, histoplasmosis and sporotrichosis.

The treatment of choice for bacillary angiomatosis, bacillary peliosis hepatis and the bacteraemic syndrome associated with Bartonella infection for both immunocompetent and immunocompromised patients is erythromycin (500 mg four times daily in adults) [23]. Excellent responses have also been obtained with doxycycline, tetracycline, azithromycin, clarithromycin and minocycline, which may be used as alternative therapy in patients who cannot tolerate erythromycin. The optimal duration of therapy is unknown, but a recent review suggests that therapy should be extended to 3 months [24]. Therapy should be guided by clinical response and, especially in immunocompromised patients, should be extended beyond clearance of lesions to decrease the likelihood of relapse. In severe or refractory cases, combination parenteral antibiotics with erythromycin or doxycycline and rifampin (300 mg twice daily in adults) should be used [24]. After antibiotic therapy is stopped, patients should be followed closely for relapse; if relapse occurs these individuals may require indefinite suppressive antibiotics.