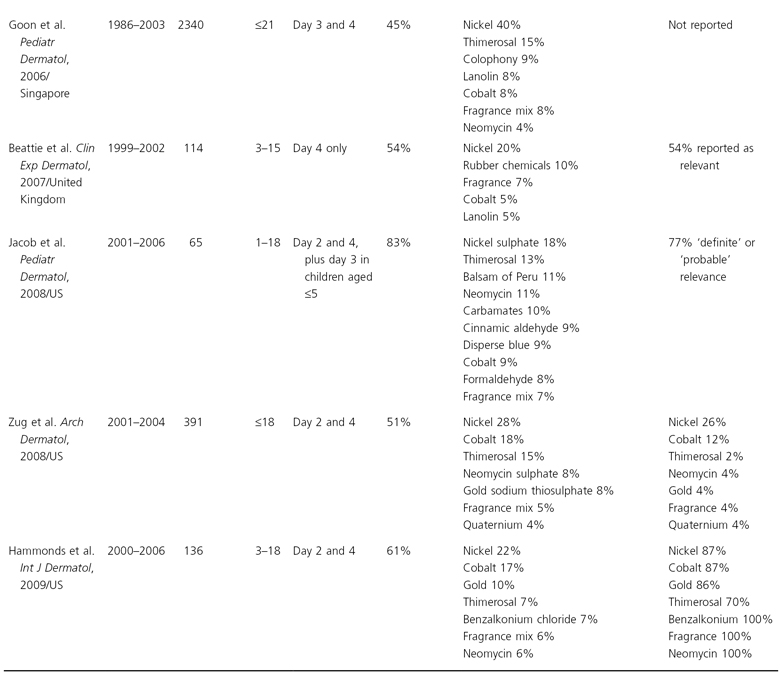 The clinical features of ACD in children are not different from adults and depend on the allergen, the duration and nature of allergen–skin contact, as well as individual susceptibility [24]. The classic appearance of ACD on the hands is marked by well-demarcated pruritic erythema, which may be acute with vesicle formation or more chronic with lichenified, scaly plaques. Facial or eyelid dermatitis raises the suspicion of ACD due to fragrances or airborne allergens, such as sesquiterpene lactones present in Compositae plants. Other plant-induced ACD tends to be linear due to a leaf or branch having been rubbed against the skin (please also see Chapter 45). ACD can also be localized to a small area, such as in nickel allergy (Fig. 44.1). Eczema confined to the feet should raise suspicion of ACD due to shoe material, such as rubber, and chemicals used for tanning (Fig. 44.2). However, ACD can be more diffuse, for instance if sensitization is due to an allergen contained in a topical treatment or where ACD worsens established AD. Contact urticaria, systemic reactions due to cutaneous sensitization [25] and photosensitivity are rare and not discussed further in this chapter. ICD and ACD can often not be distinguished clinically and this is where patch testing is helpful in identifying potentially avoidable triggers.

Fig. 44.1 Contact dermatitis due to a nickel press-stud and nickel-containing belt. 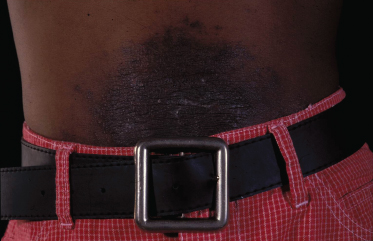 Fig. 44.2 Contact dermatitis due to mercaptobenzothiazole in shoe rubber. 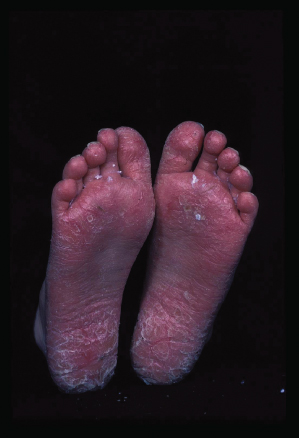 Patch testing is the gold standard method for detecting contact allergy. Expert consensus has led to the development of standardized patch test series in adults with uniform test allergens and concentrations, facilitating direct comparability between study populations (North American, European and British patch test series; Table 44.2). However, some authorities have suggested that different allergen dilutions should be used in children, especially for contact allergens that are known to cause skin irritation, such as nickel and formaldehyde [26,27] and very recently the German Patch Test Research Group has even advocated a separate patch test series in 6–12 year olds with only 12 allergens, some at lower concentrations [28]. However, there is little evidence to support this view. Paediatric patch test studies have indicated that adult patch test allergen concentrations do not appear to lead to more false-positive reactions and the standard adult series allergen dilutions can be safely used [29] (see also Table 44.1). For instance, a retrospective cross-sectional analysis among 391 patients aged 0–18 patch tested in 13 North American dermatology centres showed that there was no significant difference in the overall frequency of contact allergy (at least one positive reaction) in children compared to adults [29]. The most frequent allergens leading to positive reactions were similar and prevalence differences were small.

While a recent retrospective case study among 114 British children aged 3–15 years referred to one contact allergy clinic suggested that the yield of positive patch tests is highest in localized eyelid and hand eczema [30], we suggest that all children with hand and facial dermatitis should be patch tested as well as children with an airborne pattern of eczematous skin inflammation and those with recalcitrant AD, as the occasional detection of contact allergens and subsequent allergen avoidance may have a significant positive impact on disease severity and management.

Several types of chambers are available for the application of allergens to the skin. The most widely used, and often taken as the ‘standard’, is the Finn® chamber. Allergens diluted in petrolatum can be introduced directly into the chamber, while solutions of allergens need to be absorbed onto filter paper discs placed within the chamber. Finn® chambers have the advantage that a large number of allergens can be applied if necessary. The only limitation is the skin area available for application and this will be small in an infant. A convenient alternative testing system is the True Test®, consisting of a ‘standard’ series of contact allergens in the form of a film on a paper tape. This system has the disadvantage of permitting only testing to a limited number of allergens, unless one tests for additional allergens with conventional chambers.

Patch tests should be applied to the upper quadrants of the disease-free back (Fig. 44.3). If active eczema is present there, allergens may be applied to the front of the trunk, upper arms or thighs. However, these are not standard sites and anatomical variations in skin thickness and the degree of occlusion are likely to alter allergen penetration and thus elicitation responses. No topical steroids should have been used for a week in the area of patch testing and systemic steroids should equally be avoided. In infants and small children there is a tendency for the patch tests to become loose and it may be helpful to cover the test sites with fabric adhesive plaster or a slightly elasticated vest. Under ideal circumstances, allergens are applied for 2 days and the site of application is kept dry. Readings should be made at 2 days after application with a second reading at 4 days. A single reading is unsatisfactory, as it may not be possible to distinguish an irritant (false-positive) reaction from an allergic one. In addition, some allergic reactions, such as to neomycin, occur after 96 hours, occasionally requiring a reading on day 7. If a compromise is necessary, the 2-day application should be maintained with a single reading at 3 days after application.

Fig. 44.3 Application of patch tests on the back. 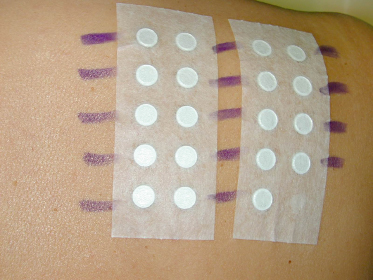 There are some geographical and temporal variations in what is included in the ‘standard’ series of Europe and North America (see Table 44.2