Retinoids at a Glance

In topical preparations, retinoids are widely used as prescription drugs as well as cosmeceuticals. In some of these products, retinoids are naturally occurring compounds while others are synthetic molecules. All retinoids, however, share predictable pharmacology in eliciting human skin responses due to the fact that retinoid effects are primarily mediated through their intranuclear retinoid receptors acting as transcription factors. Indeed, the discovery and characterization of retinoic acid receptors (RARs) and retinoid X receptors (RXRs) have been pivotal to our understanding of the retinoid action mechanism and gave rise to the idea that retinoids act similarly to hormones.1,2 In 1976, Michael Sporn and his colleagues originally defined retinoids as both the naturally occurring compounds with vitamin A activity and the synthetic analogs of retinol. This concept is no longer adequate. Now, retinoid is defined as any molecule that, by itself or through metabolic conversion, binds to and activates the RARs, thereby eliciting transcriptional activation of retinoic acid-responsive genes that results in specific biologic responses.

The discovery and characterization of RARs as having molecular features that are similar to steroid/thyroid hormone receptors were landmark findings.1,2 A characteristic common to these receptors is that they bind to regulatory regions in DNA called hormone response elements, or target sequences, and activate gene transcription in a ligand-dependent manner. Therefore, they are referred to as ligand (hormone)-dependent transcription factors. These receptors bind to specific DNA sequences as dimers. Unlike receptors for the steroid hormones, which form homodimers (two identical monomers); RAR, vitamin D receptor (VDR), and thyroid hormone receptors (TR) bind to their elements with greater affinity as heterodimers (two different monomers). The critical partner for heterodimerization and ultimate functioning of RAR, VDR, and TR is the RXR,3 whose physiologic ligand is 9-cis-retinoic acid.4 The ability of RXRs to interact with many receptors suggests their importance as regulatory proteins. There are three different members of RAR (α, β, and γ) and RXR (α, β, and γ), each encoded by different genes. Furthermore, each of the receptors has isoforms, adding to the diversity of retinoid receptors.

The identification and functional characterization of retinoid receptor families cleared the way for drug discovery. Many synthetic compounds have no structural similarities to all-trans-retinol or retinoic acid, yet are still considered retinoids by virtue of their ability to activate the receptor(s), therefore mediating the retinoid effect. Adapalene, tazarotene, and bexarotene are three synthetic retinoids that fit this description and have been used topically in humans (Fig. 217-1). Adapalene has restricted receptor specificity, possessing poor affinity for RAR-α, higher affinity for RAR-β and -γ, and no interaction with RXR-α.5 Tazarotene cannot directly bind to RARs or RXRs. However, its metabolite, tazarotenic acid, has receptor selectivity for RARs (RAR-β > RAR-γ > RAR-α),6 and is felt to be the principal active form. Bexarotene is an RXR-selective retinoid (rexinoid), which is 100-fold more potent at binding to RXR than to RAR receptor.7 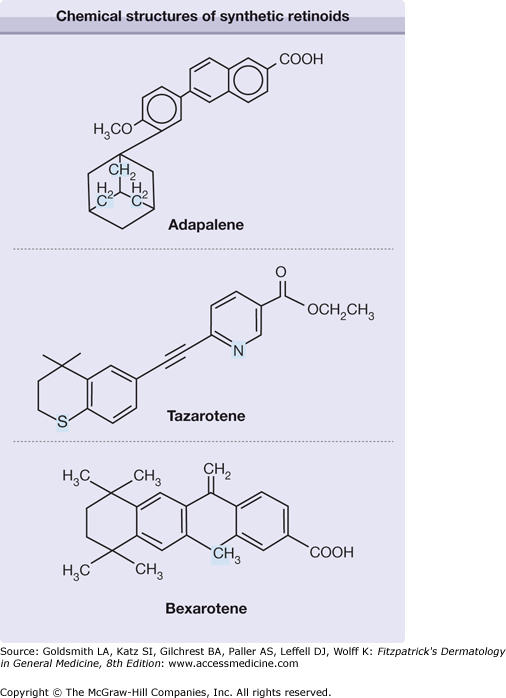 Chemical structures of the synthetic retinoids adapalene, tazarotene, and bexarotene.

Systematic analysis of relative levels of each RAR and RXR has been made in human skin and shows that the human epidermis expresses RAR-α, RAR-γ, RXR-α, and RXR-β messenger RNAs (mRNAs).8,9 The relative levels of retinoid receptor mRNAs mirror their relative protein levels. In nuclei from human epidermal cells, there are five times more total RXRs than RARs.9 For RAR proteins, 87% are RAR-γ and 13% are RAR-α with no detectable RAR-β. Of the RXR proteins, 90% are RXR-α. Furthermore, only RXR-α and RAR (mostly γ) heterodimers bind to retinoic acid-responsive elements (RAREs).9,10 At their physiologic levels, RARs and RXRs in human skin bind RAREs as heterodimers and transactivate these response elements in response to RAR, but not to RXR ligands. However, the RXR is key, as the heterodimer will not bind to the RARE without the presence of the RXR protein. Ultraviolet (UV) irradiation of human skin causes a rapid and significant reduction of retinoid receptors, both RAR-γ and RXR-α.11 Although this decrease in the receptor levels is transient and returns to pre-UV treatment levels within 2 days, UV irradiation results in functional impairment of receptor-dependent retinoid responsiveness in human skin. Interestingly, pretreatment of skin with all-trans-retinoic acid before UV irradiation reduces receptor loss and accelerates receptor recovery.11

Retinoid Target Genes and Their Activation Cascade in Human Skin

Retinoid actions are mediated by retinoid receptors. Given that the receptors are transcription factors, the ultimate skin effects of retinoids (phenotypic changes) must be accomplished through regulated gene expression. The best-established mechanism by which retinoid receptors modulate gene expression is activation of retinoid target genes through direct binding to RARE in the gene promoter, thereby stimulating the basal transcriptional machinery. In skin, cellular retinoic acid binding protein (CRABP) II, cellular retinol binding protein (CRBP), retinoic acid 4-hydroxylase (CYP26), and keratin 6—all of which contain RAREs—are regulated by all-trans-retinoic acid.12–15 However, the products of these genes are unlikely to be the effectors of the retinoid response and thus cannot account for the pleiotropic effects of retinoids in skin. Undoubtedly, additional RARE-regulated genes will be identified that encode for proteins that function to modulate cutaneous growth and differentiation either directly or indirectly. A likely scenario is that these protein products, in turn, activate other non-RARE-containing genes in a cascading reaction to produce the clinical features of retinoid action in skin (Fig. 217-2). 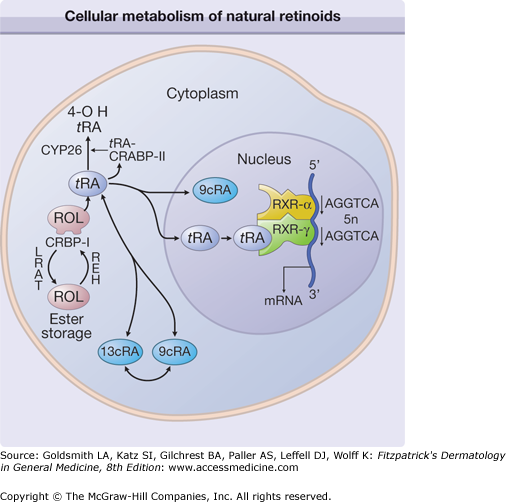 Molecular description responsible for the most striking histologic feature of all-trans-retinoic acid-treated skin, the marked thickening of the epidermis, illustrates this point.12,16 The epidermal hyperplasia is caused by the increased proliferation of basal keratinocytes. There is also an increase in differentiation markers involucrin, loricrin, filaggrin, and epidermal transglutaminase.15 These epidermal changes collectively translate to clinical desquamation and peeling. This hyperproliferative response of epidermis to retinoic acid is mediated by its nuclear receptor.17,18 Among the genes regulated by retinoid receptors involved in the cell growth control (keratinocyte proliferation), ligands for epidermal growth factor (EGF) receptor appear to be critically important. In human skin in vivo, topical retinoic acid induces heparin-binding (HB)-EGF and amphiregulin (AR), which stimulate basal cell growth via the cell surface EGF receptor activation.19,20 Interestingly, neither HB-EGF nor AR possesses any putative RARE. Therefore, a direct modulation of HB-EGF or AR by RARE promoters seems unlikely. Rather, RAR/RXR is likely regulating other transcription factor(s) that would, in turn, regulate AR and HB-EGF gene expression (Fig. 217-3). The identity of such transcription factor(s) remains to be determined. 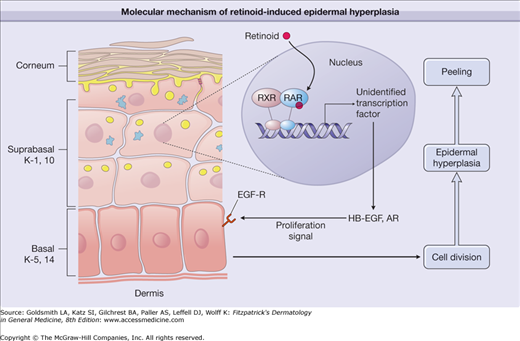 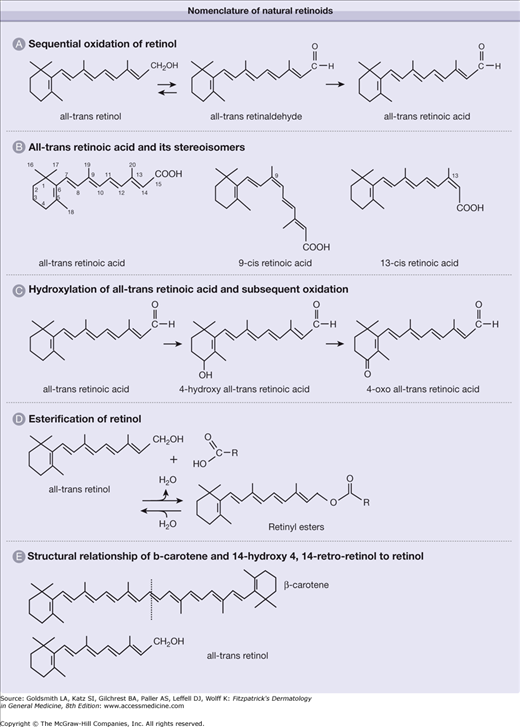 A group of compounds referred to as retinyl esters functions as the molecular storage form of retinol. The compounds are formed by esterification of retinol with fatty acids (see Fig. 217-4D), which specify the ester. For example, retinyl palmitate is generated when retinol is esterified with palmitic acid. Hydrolysis of retinyl esters regenerates retinol. Finally, β-carotene is a symmetric 40-carbon molecule (twice the number of carbons in retinol or retinoic acid) present in green and yellow–orange fruits and vegetables. As suggested by stoichiometry, one molecule of this carotenoid can potentially generate two molecules of retinol by cleavage of the central double bond (see Fig. 217-4E).

Esterification and Oxidation of Retinol