The Microsurgical Groin Skin Flap in the Rat Model

The surgical site should be sterilized using alcohol or betadine. It would be safer to perform the medial border incision first. From this incision the skin is raised and dissected laterally. This allows one to directly visualize the axial vessels from underneath. Medially and inferiorly dissection extends to include the groin fat pad. The incisions are then made along the remaining superior and lateral edges of the designed flap. The superior epigastric vessels usually need to be cauterized at the superior edge of the flap. Laterally, bleeding may occur from branches of the superficial epigastric vessels, which is easily controlled by a cautery. Inferiorly a plane should be created between the groin fat pad and overlying skin to protect the epigastric vessels diving into the fat pad. This is simply performed by careful dissection using a scissors. Then the inferior border of the flap is easily incised. The entire flap can be easily raised from cranial to caudal direction secondary to loose skin structure of the rat at a plane above the abdominal wall musculature. The femoral vessels should be identified to trace the superficial epigastric vessels. The entire flap is then freed from the wound bed and pedicled solely on the superficial epigastric vessels to create the axial pattern island groin flap model (Fig. 6.2). The flap can also be utilized as a free flap model revascularizing at the epigastric vessel level, which is technically challenging. For this purpose, in the groin region femoral vessels or in the neck the carotid artery and superficial jugular vein can be used for an end-to-side anastomosis. On the other hand, one may also utilize the entire groin flap using the larger caliber femoral vessels as the pedicle. In this way, not only one may increase the vessel size (femoral artery: 1.0 mm, femoral vein: 1.2–1.5 mm), but also a pedicle length of 2 cm or more can be obtained. This is easily achieved by meticulous dissection, isolation, and ligation or cauterization of various branches emerging with the femoral vessels both proximal and distal to the origin of the superficial epigastric vessels (Fig. 6.3). 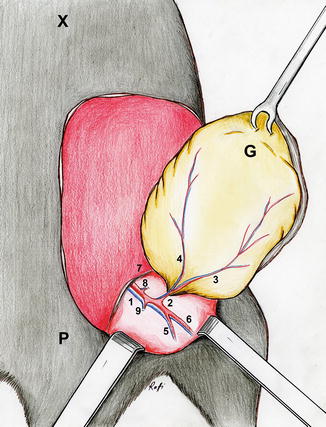 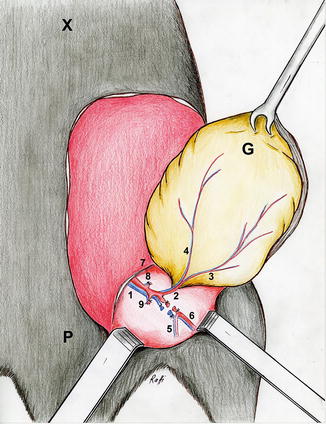 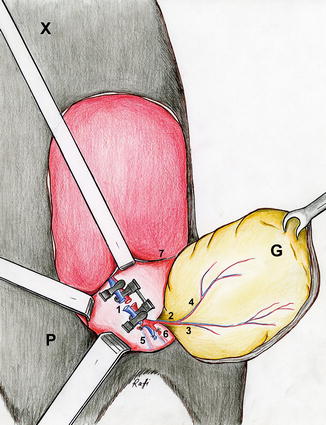 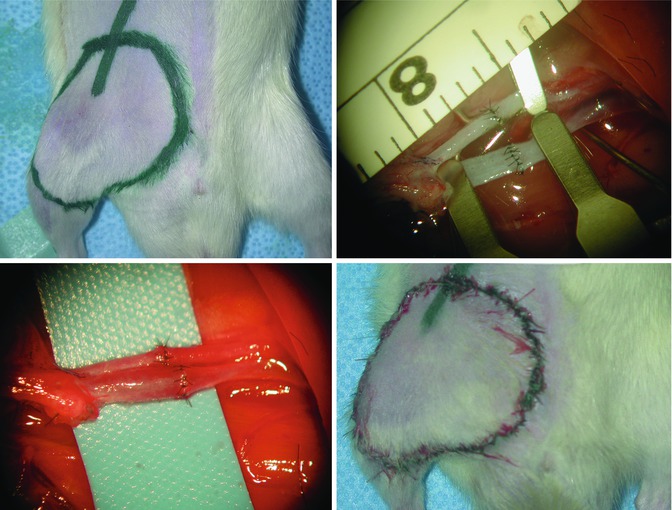 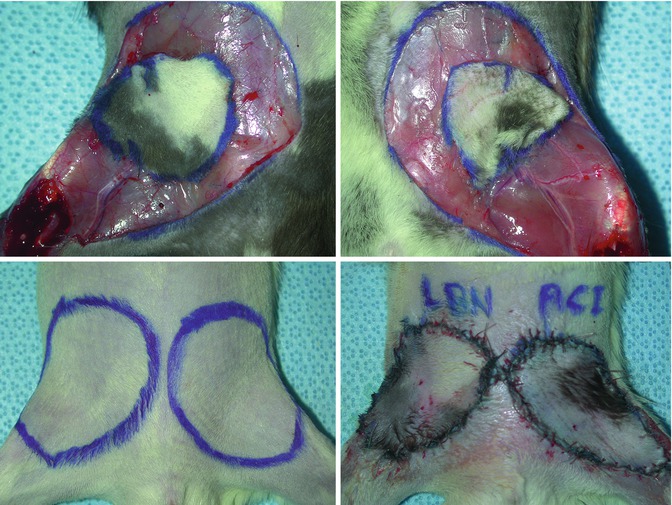 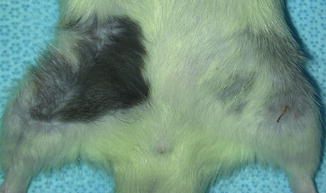 Viable transplants at 50 days after transplantation under immunosuppression
Torsion and kinking of the pedicle and undue tension on the anastomotic site should be avoided. After restoration of perfusion, the flap is sutured back to its place in case of orthotopic replantation and transplantation or at a heterotopic site. A few key stitches are placed in the right orientation using interrupted 5–0 monofilament suture. This is followed by a running stitch to finalize the skin closure. Placement of marks around the periphery of the flap prior to skin incisions allows proper positioning of the flap. Autocannibalization is very common among rats. Therefore, rats should be individually housed and protective rat vest should be employed postoperatively to avoid autocannibalization [8].

One would expect a complete survival in a standard groin flap as described here. Nevertheless, the flap viability can be evaluated by inspection at about 1 week after surgery. However, depending on the particular project, surviving flap areas and non-viable zones, if any, can be evaluated separately. A variety of methods can be utilized for this purpose. As an example, the necrotic and viable areas on the groin flaps may be separately marked on transparent nylon sheets. These drawings are then transferred to a computer by the use of a standard PC scanner. With the help of a software program, the respective areas for viable and non-viable skin flaps (if any) can be calculated in cm2. Flap survival is also presented with percentages.
Another way of assessing the flap is by means of microangiography. Groin flaps can be studied angiographically to visualize the vascularization. The entire groin flap is carefully elevated as to not to damage the pedicle of the flap. The abdominal aorta is entered with a 24F cannula. The cannula is then directed to the right or left iliac artery and securely fixated with microsutures. Animals are sacrificed humanely by a lethal dose of pentobarbital anesthesia (100 mg/ml) administered intraperitoneally. The vascular tree is initially washed out with 50 cc isotonic sodium chloride solution. Through the same catheter, a mixture of 40 % barium sulfate (40 cc), 10 % gelatine (10 cc) and 50 cc saline solution is injected using a constant pressure syringe. The flap is then harvested. Radiopaque markers can be placed on the borders of the flaps to assist with orientation in microangiography [9]. Microangiographic pictures are taken at a 1:1 reproduction ratio using an x-ray machine with quality resolution (DMR, Senographe, General Electric, kV:24, MAS:8). Depending on the particular project, histological sections are harvested with or without special staining to assess various structures of interest.

Modifications of the Groin Flap

The potential neovascularization from the bed may contribute to survival of rat groin flaps. This issue may pose a risk that can potentially jeopardize results of a particular project. Placement of polythene sheeting under the flap as a barrier may be helpful. But it may be associated with undesired wound complications. Nishikawa and his associates [10] described the development of a modified rat groin flap which utilizes the inguinal fat pad as a barrier to diminish the effects of the bed on the skin component of the groin flap. The flap in this model was designed obliquely over the groin fat pad which is located at the caudal aspect of the groin flap extending caudally to cranially and laterally.
Only gold members can continue reading. Log In or Register to continue