The pedicled TRAM flap is still the most popular way of transferring abdominal tissue to the breast.

This technique, introduced by Dr Carl Hartrampf, is consistently successful if it is performed properly.

The muscle and fascial sparing technique ensures abundant vascularity to the TRAM flap, while allowing secure and complication free closure of the abdominal wall.

The shaping of the breast using the pedicled TRAM flap is enormously simplified in the immediate reconstructive setting.

The TRAM flap is now thirty years old. After much thought, study and late night cadaver dissections the first TRAM was successfully performed on September 9, 1980. The vascular anatomy of the rectus muscle and the direction of the blood flow at the junction of the superior and inferior deep epigastric vessels was unknown at this time.

Therefore, the first TRAM and my early experience was with an upper abdominal flap based on isolated superior deep epigastric vessels. This is a very safe procedure with very little chance of post-op hernia. The only drawbacks are a residual mid-abdominal scar, and the operation is a bit challenging for the surgeon.

My early lower abdominal TRAMs were performed after a delay by ligating the inferior deep epigastric vessels. My next stage in the development of the TRAM was an un-delayed lower abdominal flap, with special attention given to including the peri-umbilical perforators. From that time on I never employed a delaying procedure. My flaps were healthy, and I never felt the need for a delay.

During these early days it became obvious to me the adverse affects smoking will have on the healing of the patient’s tissues. Cigarette smoking, current or past, is a contraindication to the performance of the pedicled TRAM flap.

Breast reconstructions using the pedicled TRAM are now frequently performed procedures in the U.S. and worldwide.

The rest is history…”

The pedicled TRAM (transverse rectus abdominus myocutaneous) flap is a well-established procedure that continues to be the most popular technique utilized by plastic surgeons in North America for transferring abdominal tissue to the breast for reconstruction. While the free technique utilizing the inferior epigastric vessels undoubtedly provides additional blood flow to the transferred abdominal tissue, it carries with it the need for advanced microsurgical training and, in most hands, a significantly longer operative time. In bilateral reconstruction, the pedicled TRAM is preferred over the free technique, unless the patient is at high risk for flap loss. The muscle and fascial sparing technique, when performed as described, leaves an abdominal defect that can be closed primarily in the vast majority of cases. Abdominal closure is facilitated by simultaneous closure of both abdominal defects so that the stress is distributed all the way across the abdominal wall. Additionally, the muscle and fascial sparing technique allows the surgeon to create a relatively small tunnel for the flap and thus, results in a relatively crisp inframammary fold postoperatively. It is not uncommon to see some venous congestion of a pedicled flap either on the table or in the immediate postoperative setting as the choke vessels in the flap’s pedicle open up. Lastly, loosely tied internal tacking sutures from the flap to the chest wall help to stabilize the flap in an aesthetically pleasing manner.

In 1980, Dr Carl Hartrampf performed the first TRAM flap for breast reconstruction. In his landmark paper, Hartrampf described a procedure in which tissues that would normally be discarded during an abdominal lipectomy were instead transferred to a mastectomy defect based on the proximal rectus abdominis muscle and the superior epigastric vessels contained within it. The skin and subcutaneous tissue of the abdomen were left in continuity with the anterior rectus sheath and its perforators from the deep epigastric vascular system, on which the flap relied.1 The introduction of this procedure provided an attractive alternative to implant reconstruction and to the other options for autogenous breast reconstruction that either did not provide enough soft tissue (e.g., the latissimus dorsi myocutaneous flap) or involved multiple stages to be completed (e.g., the tubed abdominal flaps). 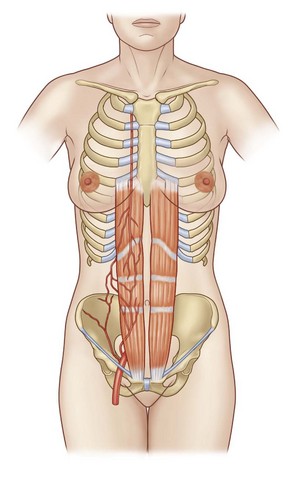 The circulation from either rectus muscle across the lower abdomen is divided into four zones (Fig. 16.2) Zone I is the zone immediately overlying the rectus muscle. Zone II is described as a zone immediately across the midline. Zone III is the ipsilateral zone just lateral to the rectus muscle border, and zone IV is the contralateral zone lateral to the contralateral rectus border. The circulation is best in zone I, somewhat variable in zones II and III, and usually poor in zone IV, particularly with a pedicled TRAM flap. In each of these zones, the blood supply is improved to some degree by use of the perforator flap, free flap, or pedicled flap after a delay procedure. 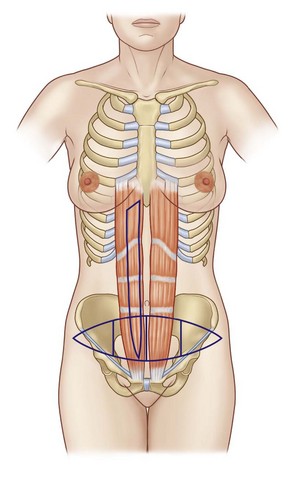 The aims of breast reconstruction are to form a breast with natural appearance and feel, comfortable and in harmony with the contralateral breast. Additional aims include leaving the abdominal donor site undamaged and, if possible, improved in appearance. In order to accomplish these goals, several factors should be considered. These include the size and shape of the opposite breast, the plans for altering the opposite breast, the nature of the mastectomy defect, the pathologic stage of the breast cancer, the likelihood of postmastectomy irradiation, the general health of the patient, the availability of donor tissue, the lifestyle of the patient, and finally the patient’s goals and expectations. Once the factors are all taken into consideration, the reconstructive surgeon has a wide variety of options from which to choose, including prosthetic techniques, autologous techniques, and combined autologous tissue and implant techniques. In addition, a number of matching procedures are available for the contralateral breast to help with symmetry.5

If a TRAM flap is to be chosen, there are a number of options available. Surgeons generally choose these options based on the presence or absence of risk factors which significantly increase the risk of complications to both the TRAM flap and the donor site. These risk factors are obesity, smoking, diabetes, hypertension, collagen vascular disease, and other significant systemic illnesses (such as pulmonary, renal, or cardiac disease). In terms of circulation, the single-pedicled TRAM flap has its best application in patients who do not have any of these risk factors and who have enough tissue in the lower abdomen for reconstruction of the breast to the desired shape and size. Generally speaking, with the unilateral pedicled TRAM, approximately 50% of the lower abdominal tissue typically removed in an abdominoplasty procedure will be available in most patients without risk factors to provide tissue for breast reconstruction. Patients who have risk factors or who need more tissue than 50% of the lower abdomen need a TRAM flap with a more robust circulation. This moves them into the category of patients who would benefit from a free TRAM flap, a TRAM with a preliminary delay procedure of the deep inferior epigastric vessels, or a double pedicled TRAM flap.6,7 There is also the option of performing a single-pedicled TRAM flap with the addition of a prosthesis in patients who have no risk factors but who need more volume than the TRAM flap alone will provide. The deep inferior epigastric artery perforator (DIEP) flap is a free flap based on one, two, or more perforating vessels, but it does not carry the whole, most, or, in some circumstances, any of the lower rectus abdominis muscle. This procedure provides an enhanced circulation compared with a single-pedicled TRAM flap, but it is most likely not as hardy or as simple to harvest as a free TRAM flap, which carries most of the perforators and a small corresponding segment of rectus abdominis muscle.8

Although, at present, it is likely that the majority of TRAM flaps done in North America are single-pedicled procedures, in the senior author’s opinion, the free techniques utilizing the inferior epigastric vessels do supply additional blood flow to the TRAM flap and also create less of an abdominal wall defect. Therefore, the free TRAM is preferred over the pedicled TRAM. This is true especially for unilateral breast reconstruction since the added time for a single sided free TRAM is not significantly increased as opposed to the bilateral free TRAM which can take significantly longer than the bilateral pedicled TRAM. Furthermore, the additional muscle and fascial harvest required in the bilateral pedicled TRAM technique is located in the upper abdomen where abdominal wall problems are rarely encountered. In addition, the bilateral TRAM technique necessarily only requires a hemi-flap for fat perfusion, decreasing the requirements for perfusion of the overlying fat of the TRAM flap. Because each hemiflap is smaller than that of a unilateral technique, which may incorporate contralateral skin and fat, the tunnel through the inframammary fold does not have to be as large, which results in a crisper and more aesthetically pleasing IMF postoperatively. For all of these reasons, in the normal risk patient, the bilateral pedicled TRAM is preferred over the bilateral free TRAM. On the other hand, the unilateral free TRAM is preferred over the unilateral pedicle TRAM mostly for perfusion pressure reasons.

In the higher risk patients, though it is probably still a good idea to use the bilateral free TRAM technique for bilateral breast reconstruction. Higher risks patients include those who are smoking or have recently smoked, are overweight, have certain scars on the abdomen, have diabetes, and/or have had previous radiation to the chest. In all of these cases, the free microvascular technique is preferred.

The patient is admitted the day of surgery and marked in the preoperative room. Markings are limited to the chest area in the preoperative room. Skin sparing mastectomies are routinely employed in immediate reconstruction, and an agreement between the oncologic surgeon and the plastic surgeon is made as to how much and in what location skin is to be removed on the breast. A commonly employed incision for a skin sparing mastectomy is a circumareolar incision only. While this is a very safe oncologic procedure and is attractive aesthetically, the small skin defect does make it more difficult for the surgeon to resect the breast and for the plastic surgeon to shape the TRAM on the chest wall. Because of this, we prefer a small transverse incision laterally from the circumareolar incision. This leaves a scar that is similar to a breast biopsy. Because the surgical oncologist has a larger incision, there is increased visibility for the resection and probably less trauma to the native skin flaps due to retraction.

Once the breast incisions are agreed upon, the patient is moved to the operating room. Patients are not routinely typed and crossed for transfusion even in the face of bilateral mastectomies and bilateral reconstruction in the more obese patient. From time to time, blood transfusions are required but they are rare. In our series, the incidence is <5%. Patients are given 250 mg of methylprednisolone as well as IV antibiotics in the preoperative area. Compression garments are used on the lower extremities prior to induction of anesthesia and during the operation.

The surgical procedures, resection of the breast and subsequent reconstruction are done sequentially. While it is certainly possible to elevate the TRAM flap while the mastectomies are being performed, we have chosen not to pursue that approach. We have found that while technically it is feasible to have two operating teams working at once, we have found it more efficient to let the surgical oncologist complete his job and leave the reconstructive team with access to the entire operating field. 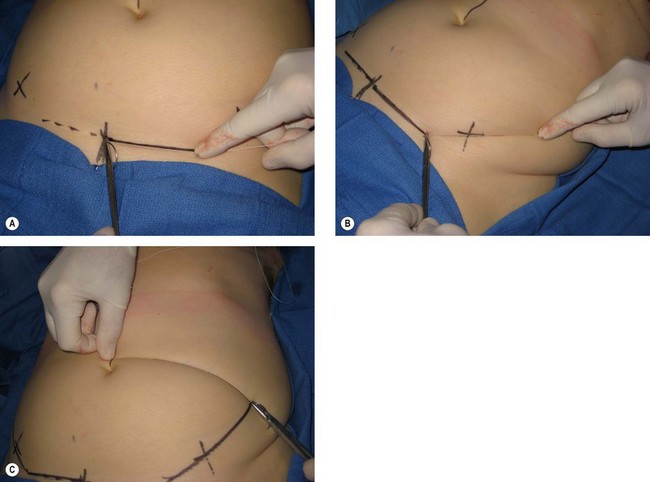 • The inframammary lines drawn preoperatively are reinforced and the tunnel positions on the right and the left are also drawn in place.

These tunnel positions are at the 5- and 7-o’clock positions on the right and the left respectively (Fig. 16.4)