Increasing evidence has demonstrated that sirtuins are a family of enzymes that play a critical role in many diverse cellular reactions. Although only recently ­discovered as post-translational modifiers (1), their presence has already been established in areas that include epigenetic gene silencing, transcriptional signaling, energy metabolism, and aging (Figure 1). Sirtuins are found throughout nature. Their function and amino acid sequence are well conserved and indicate the evolutionary importance of these molecules. Beginning with the discovery of a mutation in a yeast protein called Silent Information Regulator 2 (Sir2), which normally keeps the mating-type genes, known as HM loci genes, transcriptionally silent but when mutated leads to errant mating (2), the concept of gene silencing by sirtuins took shape (3). Further, when it was discovered that overexpression of Sir2 led to increased lifespan (4), research on sirtuin activity and reduced nutrients in relation to aging began. Although not without controversy, one study showed that sirtuin overexpression did not lead to increased lifespan in C. elegans, possibly due to the genetic background of these organisms (5). However, by adjusting the genetic controls of these organisms, Viswanathan and Guarente still showed increased lifespan, although to a lesser degree than originally reported (6). This chapter specifically focuses on mammalian sirtuins with a particular emphasis on skin, aging, and applications to skin care products. For more extensive reviews on the biology of sirtuins, the reader is referred to Sauve et al. (7) and Haigis and Sinclair (8).

In mammalian cells, seven sirtuin (SIRT1-7) homologs have been identified and they are distributed in several subcellular compartments. SIRT1 and 6 are localized in the nucleus, whereas SIRT 3, 4, and 5 are in the mitochondria. SIRT2 is cytoplasmic and SIRT7 has been reported to occur in the nucleolus. Sirtuins are NAD+ (nicotinamide adenine dinucleotide)-dependent Class III deacetylases that remove an acetyl group from a lysine side chain of its protein substrate (9). Upon reaction, the acetate moiety is transferred to its NAD+ cofactor to form 2’-O-­acetyl-ADP ribose with the release of nicotinamide (10) and is illustrated in Figure 2. 2’-O-acetyl-ADP ribose is a unique reaction product formed as a result of sirtuin action. Alternatively, the ADP portion of NAD+ is added to the lysine side chain and nicotinamide released in an ADP-ribosylation reaction (Figure 3; ref. 10). In both reactions, nicotinamide is enzymatically regenerated back to NAD+. However, as nicotinamide levels rise, nicotinamide can also begin to inhibit sirtuin activity by a feedback inhibition mechanism that acts by binding to a pocket in the catalytic site and preventing further deacetylation (11).

Figure 2: Deacetylation of a target protein by a sirtuin and transfer of the acetate moiety to form 2’-O-acetyl-ADP ribose. Free nicotinamide (NAM) is enzymatically regenerated back to NAD+ by Nampt and Nmnat. Used with permission from Journal of Cell Science, Nakagawa and Guarente (10). 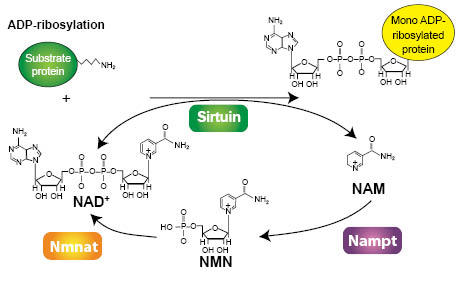 Figure 3: ADP-ribosylation of a target protein by sirtuin. Free nicotinamide (NAM) is enzymatically regenerated back to NAD+ by Nampt and Nmnat. Used with permission from Journal of Cell Science, Nakagawa and Guarente (10).

Since sirtuins are dependent on NAD+, cells that also use as the major electron acceptor in ATP synthesis, this allows sirtuins to be uniquely sensitive to a cell’s metabolic state and helps explain why sirtuins can respond to caloric restriction. In many organisms, for example in C. elegans, there is evidence that caloric restriction increases longevity by slowing aging mechanisms that are regulated by sirtuin expression (12). The importance of this fact cannot be overstated in the field of skin care product development. Understanding how to prolong the look of younger skin by effectively supporting sirtuin activity has now become a realistic objective in cutaneous research.

The two most studied organelles for mammalian sirtuin activity are the nucleus and the mitochondria, and these will be discussed in this section.

Epigenetic silencing occurs in the nucleus by the action of SIRT1. In this reaction SIRT1 deacetylates histone proteins that comprise a larger complex called the ­nucleosome, helical DNA that winds itself around in what is commonly referred to as the “beads on a string” model of DNA structure (13). When histones are acetylated, chromatin structure is more polar due to the repellant nature of these electrostatic groups, leading to a more open conformation that facilitates gene ­expression. As sirtuin activation is increased by environmental changes that, for example, may limit nutrient availability, deacetylation reduces chromatin polarity followed by condensation and gene silencing. This effect is illustrated in Figure 4 (14). Resveratrol, a natural molecule derived from grape skins, has attracted a lot of attention because of its ability to increase longevity as a function of sirtuin activation in several organisms, including yeast (15), and is discussed further in a subsequent section. 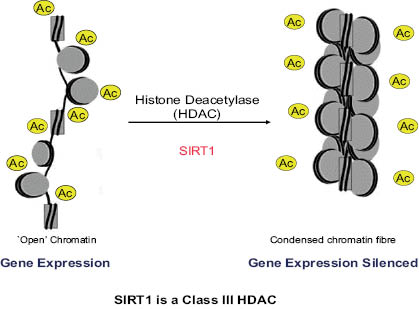 Figure 4: Schematic representation of gene silencing by sirtuin deacetylation. Used with permission from Current Opinion in Genetics and Development. Adapted from Flaus and Owens-Hughes (14).

In addition to gene silencing by histone deacetylation, sirtuins can also ­control gene expression through deacetylation of transcriptional signaling factors. An ­intriguing example of this mechanism is in the area of circadian rhythm, which, as described elsewhere in this volume by Pernodet and Pelle (16), may represent a new treatment strategy for skin care. Two circadian clock proteins, CLOCK and BMAL-1, form a heterodimer that binds to gene promoters in order to coordinate specific gene expression at the appropriate time of the diurnal cycle. CLOCK, which has acetyltransferase activity, first binds to DNA and introduces polar ­acetyl groups on the nucleosome, thereby opening up its conformation. This ­allows BMAL-1 to heterodimerize with CLOCK, which in turn acetylates BMAL-1. SIRT1 can control the action of this cycle by deacetylating BMAL-1, which then prevents accessory protein binding and limits the activity of the CLOCK/BMAL-1 complex (17). In this way, sirtuins, which also follow a diurnal pattern (16), can influence the circadian rhythm of skin cells.

SIRT1 has also been shown to activate the important regulatory and tumor suppressor protein p53. As a result, sirtuins can respond to genotoxic stress by ­allowing p53 to slow the cell cycle in order for DNA repair to occur or, ­alternatively, if the damage is too extensive, to initiate apoptosis (18). Further, transcriptional signals that respond to oxidative stress, such as forkhead box protein (FOXO), are attenuated by SIRT1, which contributes to cell survival (19).

SIRT6, the other sirtuin present in the nucleus (20), is associated with DNA damage repair, glucose metabolism, and inflammation. SIRT6 is physically bound to chromatin and aids in DNA base excision repair (21). It has also been reported to be part of a repair complex that re-anneals DNA double strand breaks (22). ­Glycolytic genes are also affected by SIRT6 activity. Under conditions of nutritional stress, SIRT6 will deacetylate histones associated with promoter regions of glycolytic genes and destabilize transcriptional regulators that shift glycolysis away from mitochondrial respiration in order to conserve energy (23). Animal studies, as carried out by Mostoslavsky et al. (21), have also shown that, when the SIRT6 gene is missing, an aging phenotype is clearly visible including graying and the loss of subcutaneous fat. Since SIRT6 has also been discovered to reside in conjunction with telomeres (24), future research in skin aging will surely be focused in this area.