A.  Perforator flap era began in 1989—Koshima and Soeda described an inferior epigastric artery skin flap without the rectus abdominis muscle for reconstruction of floor-of-mouth and groin defects.

A.  In Latin, per means “through” and forare means “to pierce or bore”.

B.  Describes a blood vessel that branches off a major named vessel (or source vessel), supplying a particular tissue territory, or angiosome.

2.  Indirect perforators first pass through an intermediary structure before ultimately reaching the subdermal plexus. Example: A muscle or musculocutaneous perforator (Mathes and Nahai Type C), in which the source vessel to the skin passes through and arises from the underlying muscle.

III.  WHAT IS A “PERFORATOR FLAP”?

A.  A perforator flap generally refers to tissue that receives its blood supply via a “perforator”.

B.  Not always a cutaneous flap—can eliminate the cutaneous component to create an adiposal or adipofascial flap.

D.  Some surgeons believe that the muscle perforator flap is the only “true” perforator flap because of the additional time and effort required to dissect the perforator out from between muscle fibers, and intramuscular dissections are technically more difficult.

A.  Perforator flaps are described according to the main artery of origin (e.g., LCFAP for lateral circumflex femoral artery perforator).

C.  Suffix “-s” is added if the flap is harvested based on direct septal or fasciocutaneous vessels.

D.  When multiple flaps are based on musculocutaneous perforators from the same source artery, the muscular origin of the vessel is abbreviated and italicized to indicate the anatomical origin of the flap (e.g., LCFAP-vl for vastus lateralis [VL]).

D.  Less difficult to tailor or thin the flap for covering or filling defects.

E.  Longer pedicle than with the parent musculocutaneous flap.

A.  Can increase length of pedicle by dissecting perforator back to its origin.

B.  Should deliberately preserve a subcutaneous or other large perforator vein during the harvest for supercharging venous outflow in case there is venous congestion.

a)  Lateral branch gives rise to lateral row of perforators

b)  Medial branch gives rise to medial row of perforators and an umbilical branch.

1)  Usually 5 ± 2 perforators can be found concentrated in periumbilical region, which is necessary if zone IV is used.

i.  Responsible for most of the flap’s venous drainage. 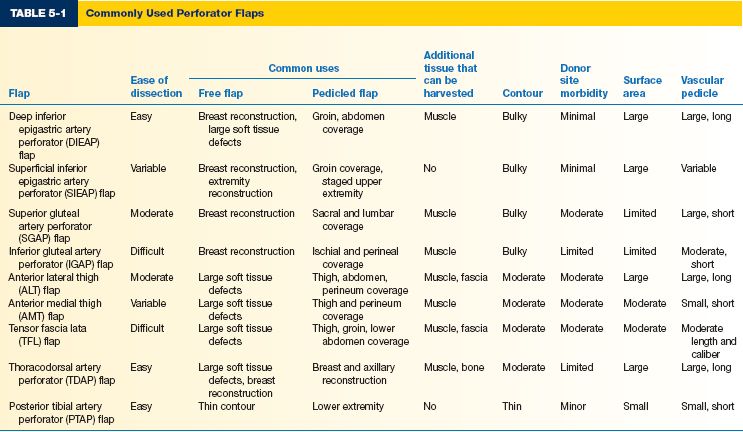 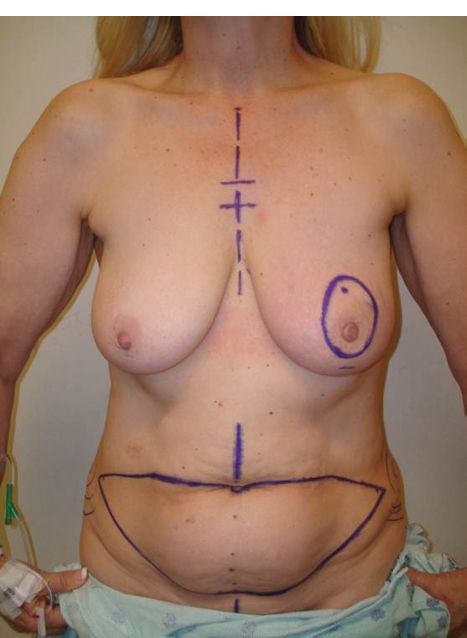 a)  If SIEA is of sufficient caliber, dissection is carried down to origin at common femoral artery (CFA) to harvest the SIEA flap.

2)  Only zones I and II are reliably perfused.

b)  If only SIEV is present, this can be used as a backup for additional venous drainage if congestion occurs after DIEV anastomosis.

iii.  Can raise the flap on more than one perforator from the same perforator row by performing atraumatic longitudinal separation of rectus muscle fibers.

iv.  Take care to preserve segmental intercostal nerves, which run medially and superficially to the pedicle.

b.  Recipient vessels in breast reconstruction

a)  Start lateral to avoid coming down into the IMA.

b)  Remove cartilage to the sternocostal articulation.

ii.  Can use large perforators from IMA and IMV if available.

i.  If possible, should orient flap such that the thicker central adipose tissue forms the medial and inferior portions of the reconstructed breast.

ii.  If preserved, can attach sensory nerves from the flap to an intercostal nerve.

iii.  Flap is partially deepithelialized or deskinned depending on the amount of breast skin preserved.

b.  Mosaic flap principle: Can harvest an adjacent flap and anastomose it to a branch of the LCFA (e.g., groin flap, medial thigh flap).

i.  Can raise flap with or without fascia.

ii.  Can thin flap with one- or two-stage procedure to resurface shallow defects.

iii.  Can use as a flow-through flap.

iv.  Can use as an adipofascial flap.

v.  Can be pedicled proximally for defects of perineum, lower abdominal wall, and greater trochanter.

vi.  Can be pedicled distally for coverage around the knee.

d.  Nerves: Can include anterior or lateral branch of lateral cutaneous nerve of the thigh to provide sensation.

i.  Can close primarily if flap width <8 cm.

a.  Perforators originate from descending branch of LCFA.

b.  LCFA lies in the intermuscular septum between RF and VL muscles.

d.  Can often find 1 to 3 perforators approximately 5 cm apart and 1.5 cm lateral to a line drawn connecting ASIS to superolateral patella. “Perforator B” is the perforator that is most consistently present, located around the midpoint.

a.  Can use Doppler to identify perforators preoperatively.

b.  Design flap around perforator B with A and C perforators 5 cm proximal and distal to B perforator.

c.  Make a longitudinal skin incision on medial side of flap, carrying on the dissection at the suprafascial level.

d.  Enter the intermuscular septum distally between RF and VL to allow direct visualization of the descending branch and location of perforators.

e.  May leave a cuff of muscle to minimize damage and spasm of the vessel.

g.  Can incorporate the lateral femoral cutaneous nerve if a sensate flap is desired.

a.  Can use as a perforator flap, muscle flap, chimeric flap pedicled on thoracodorsal vessels, flow-through flap, or osteocutaneous flap with a segment of vascularized scapula.

c.  If sensate flap is desired, can include lateral branch of intercostal nerve. 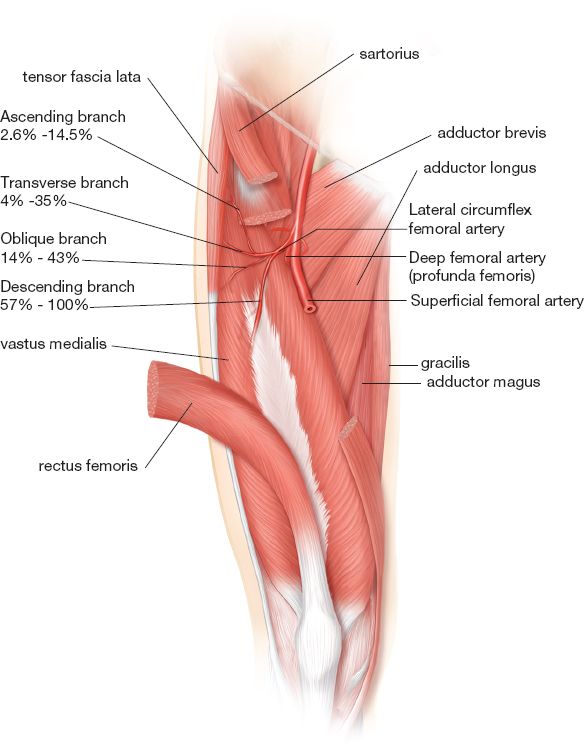 Figure 5-2. Vascular anatomy of the anterolateral thigh (ALT) and anterior thigh musculature. The descending branch of the lateral circumflex femoral artery (LCFA) is the dominant vascular supply to the ALT flap in 57% to 100% of cases.

2.  Anatomy: Descending branch of the thoracodorsal artery has the largest and most reliable perforating vessels.

a.  Found along a line about 2 cm behind anterior border of latissimus dorsi muscle edge.

b.  Perforators are located within 8 cm of neurovascular hilum and 4 cm inferior to tip of scapula.

3.  Surgical technique: With patient in lateral decubitus position, make incision just anterior to the anterior border of latissimus, which enables incorporation of a septocutaneous or musculocutaneous perforator.

b.  Donor site can be closed for flap widths up to 12 cm

c.  SGA usually emerges from edge of sacrum approximately one-third of distance along a line drawn from the posterior superior iliac spine (PSIS) to the greater trochanter.

a.  Identify perforators from SGA along a line drawn connecting PSIS and greater trochanter using Doppler.

c.  Flap is elevated from the muscle in the subfascial plane.

d.  Perforators are approached from lateral to medial.

f.  When dissecting the pedicle, must eventually open the sacral fascia and ligate multiple communicating arterial and venous branches.

a.  Inferior limit of the flap is 1 cm inferior and parallel to the gluteal fold with the patient in standing position.

b.  With the patient in lateral decubitus position, perforators are identified with Doppler.

c.  Flap is elevated from muscle in subfascial plane.

f.  Should preserve the posterior femoral cutaneous nerve and the fat overlying the ischium medially.

g.  When dissecting the pedicle, one must eventually open the sacral fascia and ligate multiple communicating arterial and venous branches.

2.  Donor site morbidity should be considered when planning reconstructive options, and closure may require local tissue rearrangement or grafting.

3.  A dogmatic, “cook-book” approach to perforator flaps should be avoided, and a detailed understanding of vascular anatomy allows the surgeon to modify these flaps to fit a multitude of reconstructive needs.

1.  What are the advantages of perforator flaps?

2.  What is the difference between a direct and an indirect perforator?

Direct cutaneous perforators pierce the deep fascia to supply the skin without traversing any other structural tissues, whereas indirect perforators traverse an intermediate structure (i.e. muscle) prior to piercing the deep fascia and supplying the skin.

3.  What perforator flap options are available for breast reconstruction?