• Lipoabdominoplasty with previous flap resection is a complete method for the correction of esthetic abdominal deformities by removing excess skin and subcutaneous fat whilst also repairing the rectus diastasis and tissue laxity.

• Abdominal surgery has been extensively revised and published since Dermars and Marx in 1890 and Kelly1 in 1899.

• It is important to note the following:

1. Accurate evaluation of the patient and precise demarcation are key points to this procedure.
2. Concurrent liposuction enhances the body contour and removes excess fat in selected areas.
3. The previous flap resection is as a single block and the absolute control of bleeding shortens the procedure and reduces operative time.
4. The drastic reduction of the undermined area preserves the perforating vessels, improving surgical safety and efficiency, and maintains total viability of the flap.
5. The outcome is predictable and consistent and the patient recovery time is reduced.

Many surgeons over the last century have increased our understanding of abdominal surgical anatomy, especially with regard to the vascularization and lymphatic drainage of the abdominal wall. These advances have resulted in surgeons able to perform safer, more efficient and faster abdominoplasty procedures with good and consistent results.

Surgeons such as Callia,2 Pitanguy,3 Pontes,4 Baroudi,5 Avelar,6 Matarasso,7 Lockwood,8 Guerrero Santos,9 and many others around the world have contributed to the development of surgery in the abdominal area.

Concerning vascularization studies, contributions from El Mrakbey,10 Boyd and Taylor11 and others have highlighted the associated morbidity related to the extension of the undermining in these procedures.

The classifications of the pathology, according to Pitanguy12 and Bozola,13 allowed more precise and correct surgical indication by choosing the technical options and the extension of each procedure.

Baroudi’s5 stitch technique greatly diminished the occurrence of seroma formation by plicating the abdominal flap to the aponeurosis. Seroma formation, together with infection and skin necrosis, are the major complications of this procedure in the postoperative period. 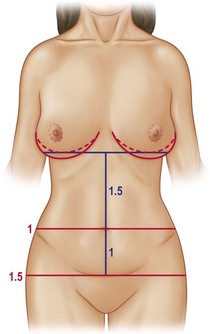 FIG. 22.1 Geometrical position of the umbilical scar described by Bozola.

However, the greatest advancement in the evolution of abdominoplasty was the use of liposuction. The liposuction studies by Illouz,14 Avelar,6 Saldanha,15 Hunstad16 and Klein17 highlighted the safety of this procedure in regular association with traditional abdominoplasty. Liposuction decreases fat thickness and reduces the undermining required. This results in both harmonious and satisfactory outcomes for the patients and their respective surgeons.

In our clinical practice we are in favor of the previous resection of the abdominal flap as proposed by Pontes4 since 1964. The ease of the resection, the absolute control of bleeding, scar symmetry, and improved speed and efficiency of the procedure are our critical points to advocate the abdominoplasty with previous flap resection as our routine technique. In addition, improved flap handling is another distinct advantage and further emphasizes our preference for this procedure.

Once the patients have disclosed their expectations about the surgery, we carefully analyze the deformity to indicate the best technical option for the case. The surgery must be clearly discussed with the patient beforehand so as to avoid any misunderstandings with regards to scarring and the final esthetic results.

Type IV: Abdominal lipodystrophy with marked cutaneous flaccidity, the presence of muscular diastasis or eventrations with or without associated umbilical scar in a normal anatomical position.

Type V: Marked abdominal cutaneous flaccidity with or without lipodystrophy; presence of scar at the midline of the abdomen. The umbilical position is in a normal or altered anatomical position.

So, with precise analysis we can choose the exact surgery type for each case.

In this chapter we are going to focus on patients with types IV and V abdominal deformities. These are patients who present with skin excess in the inferior and superior part of the abdominal wall, flaccidity of the muscle aponeurotic layer, diastasis of rectus abdominis muscles and the presence or absence of fat.

These patients require a selective liposuction in the supraumbilical area, waist and hips, resection of the infraumbilical flap as a block, plication of rectus abdominis muscle aponeurosis, caudal sliding of the flap, transposition of the umbilical scar, and closure by anatomical planes.

Other preoperative considerations are the routine clinical examination and clinical history, especially for those patients with a history of previous deep venous thrombosis, obesity, and massive weight loss, diabetes, and cardiac abnormalities. All these patients require closer and special attention throughout the pre and post-operative periods.