DIEP is the the most used flap for an autologous breast reconstruction.

Perforator vessels arising from the deep inferior epigastric system are anatomically highly variable regarding their number, location, caliber and relationships with surrounding structures.

The ideal perforator should have a large caliber, a short intramuscular course, the easiest dissection, a suitable location within the flap and subcutaneous branching with intra-flap axiality.

Nowadays Imaging techniques (DMCT and MRI) have become the favorite techniques for the preoperative study of these patientes.

Imaging techniques provide anatomical images that allow us not only to locate the dominant perforator but also extra information about the vessels and donor area.

It is essential to have a good assesment protocol of the images to select the most suitable perforator.

Abdominal perforator vessels vary greatly in size and distribution from one patient to another, and, even from one hemi-abdomen to the other in the same patient. As the anatomy of these vessels is not constant, it is helpful to have a preoperative method that provides an overall view of the distribution of the abdominal vascular anatomy. In the search for refinements in planning perforator flaps, several techniques have been described for the preoperative evaluation of donor areas. Although most of them were initially described to study the abdominal area, they are useful for preoperative evaluation of other flaps, such as the SGAP. Imaging techniques have led to a revolution in preoperative mapping of donor areas in breast reconstruction patients. Multidetector-row computed tomography (MDCT) and magnetic resonance imaging (MRI) can provide anatomical images with detailed information about the caliber, location and course of the main vessels and their perforators and can therefore play a vital role in the preoperative investigation of perforating vessels.

Handheld Doppler ultrasound has been used since the beginning of microsurgery. In the 1970s, it was used to identify a skin perforator for inclusion of its vascular territory in a flap for planning axial-pattern flaps.5 The literature shows that unidirectional Doppler flowmetry has been used successfully in the planning of perforator local flaps for the extremities.6 However, Blondeel et al.7 and Giunta et al.8 applied preoperative Doppler sonography in abdominal surgery and the studies produced very high false-positive results. Over the years, more reliable techniques have been described for locating perforators. Although the preoperative acoustic Doppler examination is the oldest and least precise technique, it is still commonly used to locate an individual vessel for preoperative examination. A refinement of this technique, color Doppler imaging appeared some years later and is still used in the surgical planning of perforator flaps. It has proven much more reliable than hand-held Doppler and many authors have described its advantages.9 Because it allows the vascular anatomy of donor areas to be evaluated preoperatively, operating time is decreased.

Imaging techniques were not considered as a preoperative tool in breast reconstruction until the last decade when articles first described MDCT as a reliable method in preoperative planning of the DIEP flap. In 2006 Masia et al.10 validated the technique and showed that operative time and complications in breast reconstruction decreased. Many authors have shown that MDCT provides excellent preoperative mapping of the abdomen.11–15 Preoperative CT scans have proven reliable to detect and delineate abdominal perforators, making it much easier to find them during surgery. In view of its multiple advantages, this technique is currently considered the first choice for preoperative evaluation of the DIEP flap.

Recently, MRI has been proposed as an alternative to MDCT so as to minimize the impact of radiation. Many authors have tried to obtain images with the same quality as MDCT16,17 but have been unsuccessful. In 2010, Masia et al.18 presented good results with non-contrast magnetic resonance achieving good images of the deep inferior epigastric perforators without the need for intravenous medium.

The two flaps most commonly used for autologous breast reconstruction are DIEP and SGAP. In both cases, perforator vessels arising from the source vessels are extremely variable and it is hard to predict how many are present, what their caliber is, where they pierce the fascia, and what course they take within the muscle. Therefore it is very useful to have a reliable preoperative method to locate the best supplying perforator. Several factors must be taken into account when we are selecting this best perforator. The ideal perforator should have a large caliber, a short intramuscular course, the easiest dissection, a suitable location within the flap and subcutaneous branching with intra-flap axiality. In some cases of DIEP, we can find paramuscular vessels that initially follow a retromuscular plane before piercing the muscular fascia in the exact abdominal midline. Many of these perforators have a good caliber and good arborization in the subcutaneous tissue and could be considered to be the ideal perforators because their course facilitates the surgical dissection (Figs 13.1, 13.2).19 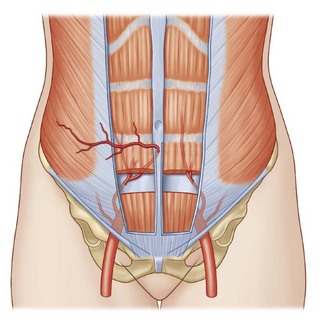 Fig. 13.1 Paramuscular perforator of the deep epigastric vessels with its medial location. 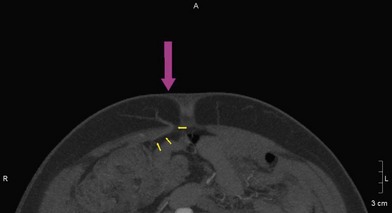 In view of the difficulties in finding the best perforator in the donor areas, it is of great help to dispose of a technique that locates the individual perforating vessels and allows qualitative preoperative evaluation. This is possible with imaging techniques. MDCT and MRI provide anatomical images that delineate the main vessels, their course and their relationship with the surrounding structures. Studying all this information before surgery, surgeons can decide in advance which perforator they are to center the flap on or which hemi-abdomen or buttock should be used.

Before imaging techniques were described for the study of abdominal perforators, the two most widely used approaches were hand-held Doppler ultrasound and color Doppler imaging. Below is a brief summary of these techniques.

Hand-held Doppler ultrasound was the first method described for the study of perforators. It is still the most widely used method to locate a perforator, due to its low cost and simplicity of use. The information it offers, however, is limited. It does not distinguish between perforating vessels and main axial vessels. Furthermore, the relationship between acoustic signal and vessel size is unreliable and fails to determine the size of the vessel. Besides, this technique has shown an unacceptable number of false positives and tiny vessels can be confused acoustically with a good perforator.7,8 But despite these drawbacks, hand-held Doppler ultrasound remains useful in our daily practice and can still be useful for specific indications, such as to assess the location and the course of the superficial epigastric vessels.

Color Doppler imaging of the donor area provides much more reliable information than Doppler sonography.9 It can identify and locate the dominant perforators. It is very sensitive and it provides information about the caliber and blood flow of the main vessels and perforators. It provides dynamic information on vessel flow, but flow rates may not always reflect the absolute size of the perforator. Vessel damage caused by atherosclerosis, previous surgery or blood vessel disorders and congenital abnormalities or anatomical variants can be diagnosed. However, this method also has some significant drawbacks. It is a long test, possibly lasting up to an hour, and this can be uncomfortable for patients as they have to remain in the same position during the procedure. In addition it is technician-dependent and the radiologist who performs the technique must have a sound knowledge of perforator surgery.

Imaging techniques have revolutionized the preoperative mapping of abdominal perforators. The first studies on their application were published in the preoperative evaluation of breast reconstruction patients,10 and since then, MRI and MDCT have become the preferred technique for the study of these patients.12

With the incorporation of imaging techniques for mapping the abdominal vascularization, we are not only able to locate the dominant perforators but we also receive extra information about the vessels and the donor area, thanks to the anatomical images that these methods provide. The two imaging techniques used are the MDCT and, more recently, the MRI. Both of them have shown they are highly reliable methods for the preoperative study of the abdominal perforators. By providing anatomical images, they inform us about the number of perforators, their location, their intramuscular course and their distribution inside the subcutaneous tissue. They have 100% sensitivity and specificity at the time of locating the dominant perforator, and they are also technically reproducible. This last characteristic is especially handy, as it means we can record the information on a CD or pen-drive and have it at our disposition at the moment of surgery. Besides, the increased spatial resolution offered by MDCT and MRI allows highly accurate multiplanar and 3D reconstructed images, creating a 3-dimensional map of the perforating vessels. Another advantage is the fact that they provide an anatomical reference of the area. This is particularly useful in patients who have had previous surgeries because it identifies any possible changes that may have taken place in the vascularization or surrounding tissues. They have also reduced surgery time and the number of complications.10,11

It should also be mentioned that MDCT is very fast to perform and a considerable number of thin sliced CT images are obtained in a short time. The quality of the images is superior to MRI, especially in the capacity of three-dimensional reconstruction (Fig. 13.3). In spite of all its advantages, the MDCT has two clear drawbacks. The first is the radiation the patient receives when the test is performed (effective dose is 5.6 mSv, similar to conventional abdominal CT-scan). However, the effective dose of radiation used with this technique is 5.6 mSv, which is less than that used for an opaque enema or a conventional abdominal CT scan. The second drawback of the MDCT is the need to administer an intravenous medium; this is uncomfortable for the patient and can cause allergic reactions. 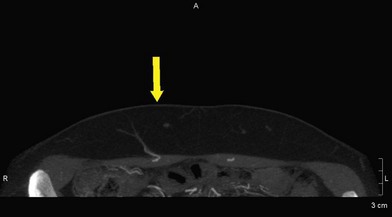 Fig. 13.3 Axial MDCT image of an intramuscular perforator of the deep epigastric vessels with its branching. Yellow arrow indicates the point in which the perforator pierces the fascia.