This chapter describes the chemical and physical properties of hyaluronic acid and its cleaved, lower-molecular-weight fragments as well as its derivatives relative to their interesting and useful topical application to moisturize skin in anti-aging products.

4.1.3.4 Hyaluronan penetration into the stratum corneum and into the skin

4.1.3.6 Selected Derivatives of Hyaluronan and their Effect on Skin Moisturizing

Hyaluronan (HA) is a naturally occurring linear polysaccharide consisting of alternating β-1,4-linked units of β-1,3-linked glucuronic acid and N-acetyl-D-glucosamine (Figure 1.1). HA is a main component of the extracellular matrix in connective, epithelial, and neural tissues and is known to play an important role in the tissue hydration and water transport mainly due to its enormously high water-binding capacity. The high water-binding capacity of HA can be attributed to high density of fixed negative charges in HA chains from carboxyl groups, which causes the osmotic pressure and draws the water molecules into the tissues containing HA.1 For example, HA within skin layer holds up 1000 times its weight in water molecules.2 Additional biological functions of HA include maintenance and viscoelasticity of liquid connective tissues such as joint synovial fluid and eye vitreous, supramolecular assembly of proteoglycans in extracellular matrix, and numerous receptor-mediated roles in cells, mitosis, migration, tumor development, and metastasis and inflammation.1 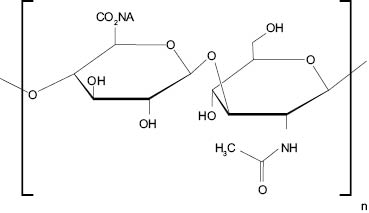 The extensive repertoire of HA biological functions suggests the existence of different conformations and specific binding interactions.3 It is likely that the conformation is affected by the local environment, including ionic strength and specific ion interactions, and the presence of interacting species including proteins and lipids. In the extracellular matrix, under normal physiological conditions and ionic strength, HA is generally believed to exist as a crowded random coil molecule.4 A change in HA conformation is suspected under specific pathological conditions. Lowering the pH results in protonation of carboxyl groups and increased solution viscosity. In contrary, there is a polyanion contraction with rising ionic strength due to the increased electrostatic shielding of HA. This latter effect is accompanied by a decreased solution viscosity. The HA solution viscosity is also temperature dependent and is a function of the overlapping parameter, molecular weight and concentration.

Some applications involving HA as an active ingredient require filtered HA solutions. The question that arises is whether filtration changes the physical-chemical properties of HA or not. According to our unpublished results, when proper dilution is used, filtration of HA (from 15 kDa up to 1.7 MDa) solutions through 0.22 µm nylon filter had no impact on molecular weight, polydispersity, and solution viscosity. The filtration impact on biological properties has not yet been established.

The major disadvantage of native HA is its low resistance against enzymatic degradation and short half-life after internal administration due to natural scission by enzymes and degradation by radicals. For this reason, at the present time the main challenge is the design of new HA materials that retain or increase the hydration properties of the polysaccharide and at the same time last longer in the application point. In order to increase the biological resistance of HA towards enzymatic degradation, modifications are being introduced in HA structure.5,6 Another challenge is to synthesize HA derivatives with altered and specific physical-chemical and biological functions. Since the biological properties are connected with the HA molecular weight, there is also a great interest in HA degradation and evaluation of biological behavior of HA fragments.

Disintegration of the HA β-linkages leads to formation of hyaluronan fragments of different sizes, identified by a name that indicates the number of monosaccharide units of which they are composed, e.g., a tetramer consists of four monosaccharide units—two glucuronic acids and two N-acetyl-D-glucosamines (GlcNAc). The name of the other fragments is created analogically. Fragments comprising more units are characterized by average molecular weight in Daltons. Thus, an eicosamer having 20 subunits is in literature specified as 20-mer, but it is also possible to say HA of molecular weight 4 kDa.

Mechanisms of the HA cleavage into its smaller fragments comprise enzymatic, free radical, thermal, ultrasonic, and chemical methods such as acid and alkaline hydrolysis.7 Non-enzymatic reactions proceed randomly, and by this means mixtures of HA saccharides with different molecular weight can be obtained. By contrast, enzymatic cleavage is selective and allows preparation of HA oligosaccharides with specific structure. Enzymatic digestion is catalyzed by two main types of enzymes—hyaluronate lyase and bovine testicular hyaluronidase (BTH).8 Both enzymes produce fragments that contain an even number of saccharide units with GlcNAc at the reducing end. While HA oligosaccharides obtained by BTH are fully saturated, hyaluronate lyase produces oligosaccharides with the double bond between C-4 and C-5 position of uronic acid at their nonreducing end. Both saturated and unsaturated HA oligosaccharides lose under alkaline conditions GlcNAc from the reducing terminus with formation of odd-numbered oligosaccharides.9

During non-enzymatic cleavage, HA can be partially transformed into undesired degradation by-products exhibiting unwanted biological properties like carcinogenesis. Their identification is important so as to suggest ways of their elimination and to offer a final fragmented HA product free of toxic impurities. Until now only degradation by-products arising from acidic and alkaline hydrolysis have been established. Cleavage of hyaluronan under alkaline conditions gives a mixture of stereoisomers (E)-3-dehydroxy-3-en-D-GlcNAc and (E)-3-dehydroxy-3-en-D-ManNAc,8 while acid hydrolysis of hyaluronan leads to creation of furan-like derivatives and derivatives of cyclopentanone.10 These degradation by-products can be removed from the reaction mixture by ultrafiltration through a membrane of suitable cut-off.

Physical-chemical properties and biological activity of native HA significantly differ from its low-molecular-weight fragments. While high-molecular-weight HA is a space-occupying material and contributes to the structure of the extracellular matrix and tissue integrity, smaller-sized HA fragments are involved in a wide spectrum of complex biological mechanisms. From the cosmetic perspective, the most important properties of HA fragments involve stimulation of angiogenesis and supporting the proliferation of fibroblasts. Pro-angiogenic properties are exhibited especially by short HA oligosaccharides comprising from 6 to 20 saccharide units. HA oligosaccharides are mitogenic for endothelial cells, support their migration, and induce multiple signaling pathways.11 Their good biocompatibility and low toxicity make them an ideal therapeutic agent for the situations when stimulation of new blood vessel growth is needed. HA oligosaccharides are also components of dermatological compositions for combating hair loss and stimulating hair growth. In the field of reproductive medicine, HA oligosaccharides may help fertilization.

Hyaluronan fragments can also be used for treating and preventing wrinkles, expression lines, fibroblastic depletion, and scars. HA oligosaccharides (with molecular weight <5 kDa) contribute to the suppression of wrinkles in both layers of the skin. At the epidermis, they stimulate the endogenous synthesis of high-molecular HA, which has a positive effect on hydration. At the level of the dermis, HA fragments decrease the creation of pro-inflammatory interleukins, which are responsible for generation of free radicals capable of damaging both components of the extracellular matrix and the skin cells themselves. The most ambitious application of HA oligosaccharides is treatment of cancer. Anti-tumorigenic effects of HA oligosaccharides are based on their ability to sensitize cancer cells to treatment. The binding of oligomers to the HA receptors also inhibits the pro-tumorigenic signaling of high-molecular-size HA. Some low-molecular-weight HA molecules are believed to release strong immune reaction to the cancer cell.12-14

Since the length of HA polysaccharide chain is closely related to its biological functions, it is necessary to determine its molecular weight properly. A range of analytical techniques has been employed to assess the sizes of HA fragments. These were originally determined from the ratio of total glucuronic acid concentration to that of the reducing end GlcNAc group. More recently, other methods including viscosimetry, electrophoresis, mass spectrometry, and liquid chromatography have been used.15 Electrospray ion mass spectrometry (ESI-MS) is mainly used for molecular weight characterization of short HA oligomers (up to 40-mer) derived from enzymatic digestions.16 Enzymatic degradation provides a complex mixture of even-numbered HA oligomers, which must be fractionated using suitable techniques such as electrophoresis or liquid chromatography before ionization. ESI-MS utilizes a flowing stream containing the analyte and provides gentle ionization. Proper care must be taken in setting the cone voltage that accelerates the ions into the mass analyzer because high values of the cone voltage may result in an artifact of an increase of charged species. By contrast, low cone voltage leads to insufficient ions. At lower cone voltage it is possible to observe odd-numbered HA oligomers as artifacts in ionization.

As in the ESI-MS technique, it is not possible to avoid fragmentation of larger HA oligomers; it is advisable to use MALDI-TOF. This technique is suitable for characterization of polydisperse mixtures; it presents tolerance towards salts and buffers and is highly sensitive.17 However, MALDI-TOF cannot be considered a quantitative method because desorption of HA fragments differs according to their size extensively. These complications can be overcome by using size-exclusion chromatography (SEC) coupled with multi-angle light scattering detector (MALS) and refractive index (RI), which provides detailed information of molecular weight, molecular weight distribution, molecular size, and solution properties in a wide range of HA fragments.18 A limitation of the technique is that an SEC column cannot separate HA fragments sufficiently. Hence, two SEC analytical columns packed with an appropriate resin and connected in series are the possible solution for the separation of HA fragments. In this set, the length of the analysis is still acceptable.

4.1.3.3 PREPARATION OF CHEMICAL DERIVATIVES OF HYALURONAN AND THEIR CHARACTERIZATION

As it has been mentioned earlier, native HA suffers from its low resistance towards enzymatic digestion. This means that native HA has a high rate of in vivo turnover, which limits the period of time during which HA may act in the place of application. For this and other reasons, chemical modifications of HA intended for cosmetic or pharmaceutical applications are recommended. Chemically modified HA derivatives are also usually more mechanically robust and thus they are more suitable for final products manufactured using higher temperatures, pressures, or shear stress. Modified HA derivatives usually have stronger binding capacity to the skin, and as a result they are not washed off as easily as unmodified HA. An extensive research has been developed for chemical modification of HA. The strategies employed can be divided into two categories. The first one involves chemical attachment of pendant groups to change the properties of the polysaccharide and modulate the hydrophilic character of HA. The usual aim of these modifications is to lower the hydrophilicity of HA, so that the modified biopolymer will be able to blend with hydrophobic materials typically used in cosmetic products.

The second strategy for chemical modification of HA involves cross-linking in order to prepare insoluble derivatives of HA or hydrogels.19 In fact, almost all of the commercially available HA products are stabilized by cross-linking to obtain materials with longer residence times and increased mechanical robustness.

Regardless of the modification strategy, the new, modified HA materials should remain biocompatible and biodegradable, as well as retaining the moisturizing properties. A critical point in the synthesis of HA derivatives is the preservation of the original chain length, since HA lubricant, shock-absorbent, and space-filling properties are closely correlated to its high viscosity, which is directly related to the initially high molecular weight of the biopolymer. From our personal experience, degradation is always inevitable during chemical modification processes.

Such modification can be carried out by the addition of the following functional groups to the polysaccharide backbone: carboxyl, primary or secondary hydroxyl groups, or the amino group after deacetylation. The chemical modification of carboxyl group is often preferred because it is the recognition site for HA natural receptors and hyaluronidase.20 This method of modification may decrease the HA susceptibility towards enzymatic degradation.21 However, the biological behavior of the polysaccharide, including its biodegradability, may change after such derivatization. Thus, the effect of each modification on the biocompatibility of the polysaccharide must be investigated in order to characterize the result on its properties.

HA coupling via its carboxyl group requires its previous activation to make it reactive to nucleophiles. The modification of carboxyl groups produces new amide or ester bonds in HA backbone. T