I.  FACTORS CONTRIBUTING TO FACIAL AGING

C.  Chronic use of alcohol and/or cigarettes

D.  Chronic medical conditions such as diabetes and renal failure

F.  Facial paralysis. The paralyzed side develops fewer deep wrinkles, but becomes more ptotic compared to the normal side.

4.  The total amount of collagen in skin decreases, and the proportion of collagen type III increases

1.  Overall loss of volume, most pronounced in middle and upper third

2.  Progressive laxity of the retaining ligaments of the face

3.  Irregularities and facial creases occur from a juxtaposition of lax tissues with fixed ligaments (e.g., nasojugal groove and jowls)

3.  The orbit expands inferolaterally and superiomedially with increasing age

4.  Increased prominence of the chin, supraorbital rim, and zygomatic arch

1.  Vertical rhytides extend radially out from the upper and lower lip margins

2.  Decreased fullness and flattening of the upper lip. There is about 1 mm loss of incisor with each decade of age due to gravity.

3.  Downturning of the oral commissures

4.  Deepening of the nasolabial folds and formation of marionette lines around the chin

2.  Formation of vertical platysmal bands from diastasis of the platysma muscles

3.  With laxity and increase in submental fat, a more obtuse cervicomental angle develops.

4.  Ptosis of the submandibular glands 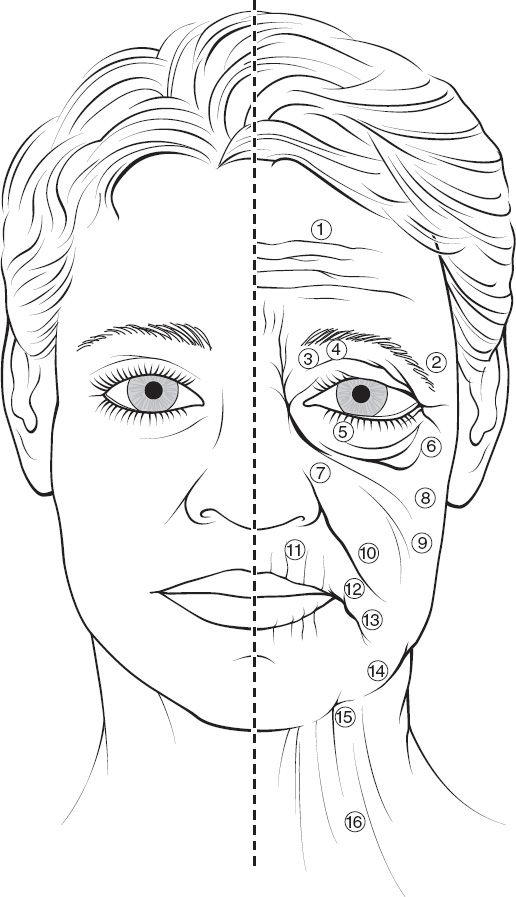 3.  Protrusion of the periorbital fat due to laxity of the obital septum

4.  Ptosis of the lacrimal glands

5.  Ptosis of the eyelid due to attenuation of the levator aponeurosis

A.  Improve the quality of the skin with chemical peels, laser, and dermabrasion (see on nonsurgical treatment of facial aging)

B.  Address the loss of volume (both soft tissue and bone) with fillers, bone, or skeletal implants

C.  Return tissues to their original anatomical place (i.e., lift what has fallen and tighten what has become lax)

1.  Soft tissue of the face is constructed in concentric circles around the cavities of the facial skeleton (the orbits and oral cavity).

2.  The areas of fixation such as the mandibular, zygomatic, and orbicularis retaining ligaments contrast with the areas of laxity in these areas to cause jowling and deepening of the nasojugal groove. 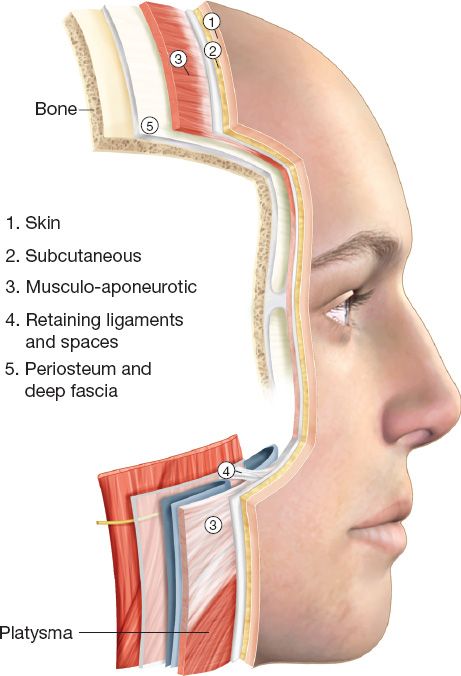 Figure 31-2. The five layers of the face, analogous to layers of the scalp and neck. The facial nerve travels deep to or within the SMAS layer.

a.  *Thin fascial layer that invests the superficial mimetic muscles and separates the overlying subcutaneous fat from the underlying parotidomasseteric fascia.

b.  Continuous with the galea, the superficial temporal fascia (temporoparietal facia), superficial cervical fascia, and the platysma

a.  Continuous with the deep layer of cervical fascia.

b.  Facial nerve branches within the cheek lie just deep to this layer laterally and become more superficial medially. 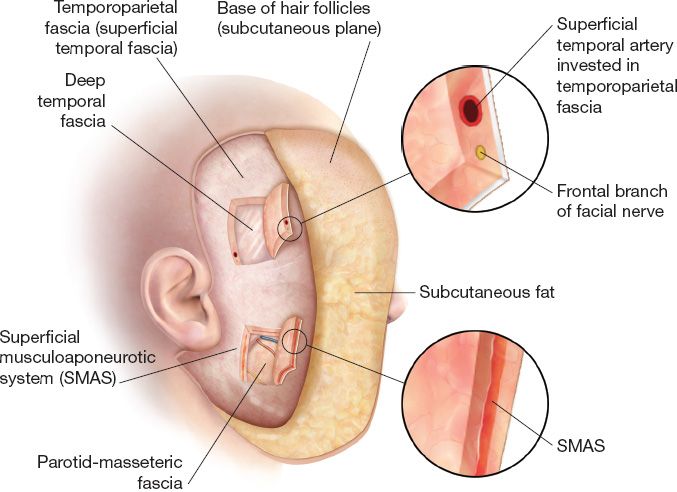 a.  Primarily from branches of external carotid

a.  The deep and superficial lobes of the parotid gland are separated by the trunks of the facial nerve.

b.  Branches exit the parotid anteriorly and travel along the superficial surface of the masseter, deep to the parotidomasseteric fascia.

c.  Anterior and medial to the masseter, the nerve branches lie over the buccal fat pad

e.  Once the frontal branch crosses the zygomatic arch (crosses midway between tragus and lateral canthus), it comes to lie within or just deep to the SMAS (temporoparietal fascia). It is here that the nerve is most susceptible to injury during a rhytidectomy.

i.  Exits the parotid 4 cm below the base of the earlobe just anterior to the angle of the mandible.

i.  Rarely symptomatic injury long term due to multiple interconnections

a.  *Crosses at the midportion of the sternocleidomastoid muscle 6.5 cm below the external auditory canal.

b.  *Courses in the same plane as the external jugular vein, which is a useful landmark during dissection.

a.  Runs with superficial temporal artery

B.  Indications and patient assessment

1.  Address the specific complaints of each patient and tailor the operative plan individually.

3.  The contour of the jawline and neckline and the status of the nasolabial folds are evaluated.

a.  Described in early 20th century, the first facelift was skin excised anterior to the ear and temporal hairline. With evolution of this technique, operations involved more extensive undermining of skin.

b.  Relies on skin tension to tighten the underlying soft tissues, which can cause skin necrosis, widened scars, and facial distortion.

c.  Although surpassed by the following techniques, it still may be useful in thin patients with skin-only excess and without ptosis of deeper structures.

a.  Flaps are raised in plane immediately superficial to SMAS, bringing fat up with the skin flap, which is then contoured.

b.  Benefits include a more robust flap and a reduction in risk of facial nerve damage by leaving the SMAS down.

a.  This is the standard facelift for many plastic surgeons and there are many personalized variations.

b.  The incision is begun just at or 1 cm posterior to the temporal hairline, continued down in front of the ear (either pretragally or retrotragally) around the base of the lobule, and then upward and posterior around the back of the ear to finish in the postauricular scalp

c.  *Beveling the temporal incision cuts across the hair shaft perpendicularly which promotes hair growth through the scar.

f.  Skin flap dissection is performed in a lateral-to-medial direction, leaving a small layer of fat on the flap. Dissection ends just lateral to the nasolabial folds.

g.  Either the SMAS is plicated or a narrow ellipse is excised. The direction of pull should be superior and lateral across the midface parallel to the nasolabial fold.

h.  The main advantage of this technique is the ability to manipulate the skin and SMAS separately, so that the SMAS can be repositioned vertically and skin can be re-draped laterally with minimal tension (Fig. 31-4)

a.  *Preauricular and pretemporal incisions. The SMAS is elevated in a vertical vector with purse-string sutures that are then anchored to the deep temporal fascia.

b.  The skin incision is similar to that described above but without the extension to the postauricular scalp.

a.  Described by Tord Skoog, this is a reliable technique to specifically address deep nasolabial folds.

b.  A sub-SMAS dissection is extended over the zygomaticus muscles and medially beyond the nasolabial folds, totally releasing all SMAS attachments and creating a thick flap composed of skin, subcutaneous fat, and platysma

c.  The total release of the SMAS allows all components of the flap to be lifted and advanced back to their original position.

d.  The correct plane is below the SMAS and just above the thin parotidomasseteric fascia, which serves to protect the branches of the facial nerve.

e.  Expectedly, the deep-plane technique is associated with a slightly higher risk of facial nerve injury.

b.  Ideal candidates are usually relatively young (40s) with aging primarily in the midface and lower face with moderate jowls.

c.  A standard incision is utilized with a truncated postauricular extension

Figure 31-4. Rhytidectomy with SMAS excision or plication. The SMAS and facial fat are repositioned in an upward manner, while the skin is re-draped in a more posterior direction.

d.  Skin flaps are elevated in the standard fashion

e.  The SMAS flap is created by incising along the medial edge of the parotid

f.  A tongue of inferiorly based SMAS is created and then sutured to the mastoid fascia to achieve the desired pull (perpendicular to the nasolabial folds).

a.  Developed by Tessier, this extensive approach can specifically address structural laxity in the midface.

b.  Complications include an increased incidence of facial nerve injuries as well as prolonged facial edema.

c.  This procedure may be performed in patients with significant facial aging and extensive ptosis of the central area of the face, including the eyebrows, nasoglabellar soft tissue, nose, nasolabial folds, cheeks, angle of the mouth, and jowls.

d.  The operative technique involves degloving of the upper face and midface and elevation of tissues in the subperiosteal plane.

a.  This technique directly addresses ptosis of the malar fat pad through a lower lid blepharoplasty incision (either subciliary or transconjunctival).

b.  Wide subperiosteal dissection over the anterior maxilla from the level of the inferorbital rim is performed.

d.  The periosteum is released, allowing repositioning and fixation of the cheek mass to the infraorbital rim or the temporalis fascia.

b.  Supra- and subplatysmal fat is removed by either liposuction or direct excision.

c.  The platysma can be tightened by plicating it in the midline (with or without transecting it inferolaterally), or pulling the platysma superiolaterally and fixating to Loré fascia. 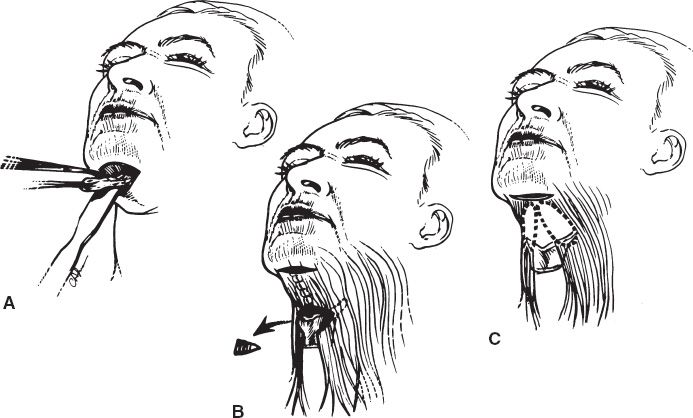 Figure 31-5. Treatment of medial platysma and platysma bands. Alternatives include A: defatting of the anterior platysma without muscle modification; B: midline platysmaplasty with wedge excision and plastymal plication; C: resection of platysmal bands without midline approximation. If a submental incision is elected, option (B) is usually the best alternative.

ii.  Subcutaneous and interplatysmal fat can be excised.

b.  More common in men than in women

d.  Must be evacuated to prevent overlying skin necrosis and scarring

e.  *Perioperatiave blood pressure control and avoidance of substances that can interfere with clotting mechanisms (e.g., aspirin and NSAIDS) are the most important preventative measures.

4.  Asymmetry: this should be addressed prior to surgery

a.  *Presents as numbness of the lower ear and earlobe

b.  If inadvertent transection is identified intraoperatively, the nerve should be repaired and good sensory results expected.

a.  The most commonly injured branch of the facial nerve is the buccal branch. However, injury is frequently unrecognized due to overlap of innervation with other facial nerve branches.

c.  Spontaneous recovery expected in 80% of patients because most injuries are due to neuropraxia or stretch. Re-exploration in the early postoperative period is rarely described, but in individual cases may be warranted if the index of suspicion for a transection is exceedingly high.

8.  Pixie ear deformity refers to a lobule that has been pulled inferiorly and anteriorly, caused by insetting the lobule under tension

A.  The chin is the most commonly augmented site, followed by the malar region.

B.  *Augmentation is useful in combination with rhytidectomy to compensate for soft tissue and bony atrophy that occurs with aging.

a.  The most commonly used material because it is biocompatible, stable, and the shape can be easily modified.

b.  Silicone implants become encased by a tissue capsule and can be easily removed if necessary.

a.  Used for rigid skeletal augmentation.

b.  Available in a variety of shapes to augment the orbital rim, malar area, piriform, mandibular angle, chin, and nasal dorsum.

c.  Polyethylene is porous and allows tissue ingrowth with a theoretical advantage of fewer complications from infection, extrusion, and malposition.

d.  For this reason, polyethylene is more difficult to remove than silicone.

D.  *The ratio of soft tissue response to facial skeletal change is approximately 0.66. For example, an implant with 1 cm of projection will usually result in 0.66 cm of soft tissue augmentation projection. In general, chin implants usually provide more reliable projection than malar implants due to their location and surrounding soft tissue contour.

3.  Patients should be informed that the effects of facelifts are considered to last for about 10 years, although this is depend on many factors, such as the age at which the procedure is performed and the general health status of the patient

5.  Cutis laxa is a condition that causes degeneration of elastic fibers in the dermis and is associated with pulmonary sequelae and hernias. Cosmetic surgery is feasible in this population but recurrence of laxity is likely.

1.  Which muscles are innervated on their superficial surface?

3.  What is the most commonly injured branch of the facial nerve?

4.  What is the most common symptomatic nerve injury?

5.  What complication do you expect when operating on a smoker?

6.  How do you avoid a pixie ear deformity?

Tension-free inset of the lobule.