2.  Can form across joint creating limitation of movement

3.  Can involve more than skin: Causes shortening and fibrosis of underlying muscle, fascia, and joints

4.  More common on flexor surface because flexors are stronger and flexed position is position of comfort.

5.  Assessment of contracture should include description of functional limitation, presence of joint involvement, quality of scarred skin, condition, and availability of surrounding tissue.

a.  Can develop in donor site, recipient site, or nonsurgical site.

b.  Topical treatment options: Hydroquinones and retinoids for hyperpigementation

a.  Can occur in grafted region or in region of deep burn without grafting.

d.  Excess hair can be treated with laser (KTP or Nd:YAG) or electrolysis.

e.  Thicker grafts in general will have more hair.

a.  Can be addressed with fractional CO2 laser.

A.  Use sheet grafts

B.  Use aesthetic units to face and hands

C.  Evaluate function, range of motion, and record for all examined joints

G.  Patient’s desires should dictate what is operated on

1.  Release of vital structures such as eyelids and exposed cornea

B.  Semielective procedures (should be done within first few months to 1 year)

1.  Release of joint limited by range of motion

1.  Should be done after 1 year to allow scars to mature.

2.  Incise skin and then keep area on tension and carefully push with scalpel.

3.  If contracture persists, may need to release underlying fascia, muscle, tendon, or joint.

1.  Place central limb of Z-plasty at site of tightness

2.  Have assistant hold contracture on stretch while cutting

3.  After Z cut, assess if it can reach and may need to deepen Z to get additional rotation

4.  Suture Z in place with 4-0 monocryl suture at the corners of the Z and then run the 4-0 monocryl along the entire Z 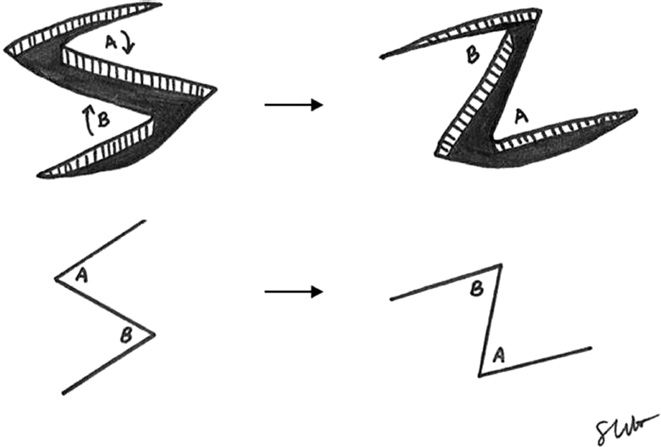 a.  In general, defects lead to loss of skin and thus skin graft is common technique used to address this.

i.  Prepare graft bed by creating even surface with weck blade or versajet (helpful for small areas on the face and eyelids).

c.  Bolster or VAC dressing placed over xeroform can aid in graft contact if irregular surface

e.  Bolsters can be secured by using tie over silk sutures.

g.  For reconstruction, if using split thickness skin graft (STSG), should use a thicker setting (0.012 to 0.020 in). Useful for forehead, upper eyelids, or closure of perhipheral areas.

i.  Preferred over STSG for hand and joint surfaces

ii.  Increased risk of infection can be tempered with antibiotic dressing.

a.  Can use rotational perforator flap such as propeller flap or keystone flap if surrounding tissue is not affected.

b.  If severe hand burn, can consider groin flap or intercostal flap.

a.  Thin free flap options such as fascia only with skin graft or fasciocutaneous free flaps.

4.  Place expander through short limited incision at junction of the defect and expander site parallel to tension forces generated when expander is inflated.

5.  If possible, place incision in burned skin so that it can be eventually excised.

6.  Expander base dimensions should be planned preoperatively.

7.  When first placing expander, it is important to make sure that the expander is not folded. The pocket must not be made too large in order to prevent unwanted changes in position of the expander.

8.  Create small tract distal from expander for filling port and use remote port in a different pocket than expander.

9.  Can use 10-mm, 30-degree endoscope to minimize incision and maximize dissection pocket.

b.  Fractional CO2 laser for hypertrophic, tight and pruruitic scars.

a.  Small subunits covered with FTSG

c.  Can delay with allograft to allow for thinner STSG

a.  The commissure should form an acute angle at a vertical line dropped from the medial limbus in repose.

c.  Successful splinting may counteract, or prevent, the natural tendency for a mild-to-moderate perioral burn to lead to microstomia and reduce the need for subsequent reconstructive operations.

i.  Skin of lateral commissure incised lateral to mid-pupil

iii.  Do not resect any tissue

i.  Three subunits: Two lateral lip elements and the philtrum

iii.  The columella can be lengthened with “fork flaps” from the upper lip.

iv.  Important to preserve and realign white roll where possible

i.  Can place scars in labiomental creases

a.  If contralateral brow unaffected, create template from this side

b.  Tarsorraphy may be helpful in the first few weeks to prevent exposure to keratitis.

c.  Ectropion: Caused by inadequate tissue; therefore, in addition to release, the surgeon will need to replace tissue, often with a graft.

a)  Release 2 mm from the ciliary margin, extending 15 mm beyond the medial and lateral canthi

b)  FTSG form contralateral side for upper lid and from retroauricular region for lower lid.

c)  Dissect the orbicularis oculi muscle free from all scar tissue, re-drape the muscle over the entire eyelid as a sling, and secure it laterally to the orbital rim and medially to the nasal sidewall.

a)  Requires addressing all lamellae

b)  Upper: If ipsilateral lower lid is intact: Hughes or Cutler–Beard flaps

1)  Release is carried laterally to the zygomatic arch, medially to the nasomaxillary buttresses, and inferiorly to the alveolus.

2)  Can perform a gingivobuccal sulcus incision for complete release under direct visualization.

3)  Infraorbital nerve is identified and preserved.

4)  Midface is suspended from the orbital rim with permanent sutures.

5)  Postseptal fat is redraped over orbital rim and septum is sewn over fat as additional layer for midface lift.

3)  Laterally, the inferior limb of the lateral canthal ligament is secured to the inner aspect of lateral orbital rim with nonabsorbable horizontal mattress suture

d.  The canthal tendon is secured at the level of the midpupillary line

3)  The graft is secured in place with permanent sutures.

a.  Layers to consider: Skin, mucosa, and cartilage

c.  Dermabrasion followed by STSG or FTSG in an aesthetic unit

b.  Larger helical rim defects: Davis conchal transposition flap. Elevation of a composite flap of skin and cartilage from the concha, pedicled at the crus helix, is transferred to the upper third of ear. The donor site is closed with a skin graft.

d.  An osseointegrated prosthesis is an excellent option for total ear loss with significant burn scar on surrounding tissue.

a.  *Neck contractures are the most common complication of burn injury

b.  Key components: Range of motion and oral competence

c.  Release scar contracture down to plastysma or subplatysmal followed by coverage with large FTSG or thick STSG followed by aggressive range of motion 5 days after having patient in neck brace.

d.  Can use multiple tissue expanders in infraclavicular region.

a.  Small defects: Advancement or rotation flaps with donor site closed or covered with skin graft.

b.  Moderate: Tissue expansion with expander placed in subgaleal plane (deep to frontalis)

4.  Can do contralateral reduction to aid in symmetry

a.  Breast bud progenitor cells are at risk.

b.  Important to release contracture to allow for development of breast.

2.  Common because difficult to maintain adequate positioning in acute phase of burn.

a.  Type I: Both the anterior and posterior axillary folds are involved leaving the normal skin in the hair bearing central part. A web is formed during abduction.

b.  Type II: The inner portion of the upper arm and the adjacent trunk as well as one axillary fold are involved.

c.  Type III: The upper arm and the lateral aspect of the trunk and completely included in one mass of U-shaped hypertrophic scar.

5.  Type I and II: Contracture sequential release and thick STSGs or FTSGs

7.  Must pay attention to where hair-bearing regions are transposed

1.  Results from scarring along antecubital fossa or dorsal forearm and upper arm

3.  May need to perform tendon lengthening of the biceps tendon.

b.  Current diagnosis strategies inadequate and include X-ray and CT.

d.  More common in blast injuries and burns over 50% TBSA.

1.  Prevention of hand contracture is key

Figure 57-2. Algorithm for tissue expansion reconstruction of the burned breast. 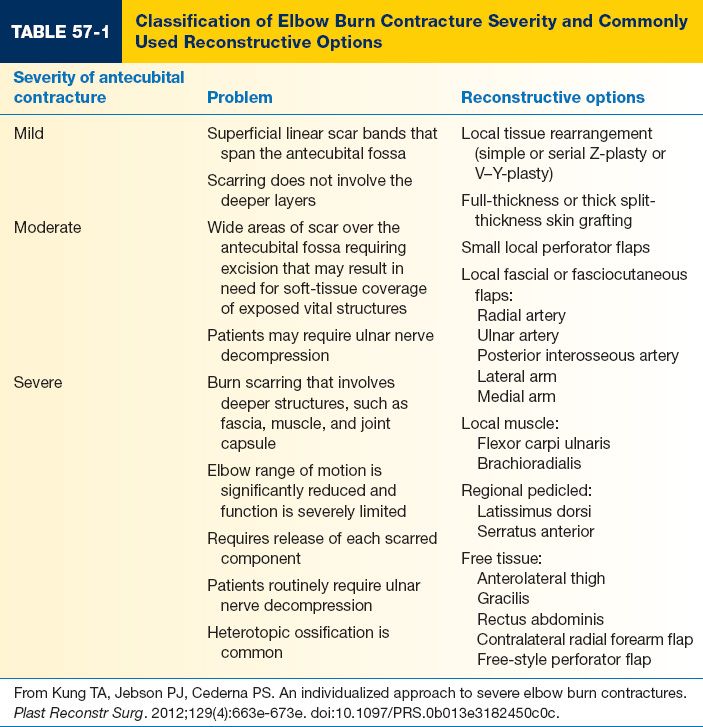 b.  Splint in position of protection: MC flexed at 70 to 90 degrees, wrist 20 to 30 degrees, IP joints in full extension and thumb kept abducted and slightly opposed

a.  Isolated scar bands volarly or excision of scar and FTSG

b.  Tendon plasty using palmaris longus and groin flap for coverage after full ROM of joints.

d.  Release and redirection of lateral bands from volar to dorsal.

b.  If scar released and not sufficient gain in flexion, may need dorsal capsulotomy.

a.  Avoid excision of palmar skin

b.  FTSG to resurface small defects, though may need dorsal neurocutaneous island flap for large defects

a.  Post-burn syndactyly is the most common secondary deformity and usually involves dorsal skin of web space

d.  If more severe: Release fascia or adductor pollicis from its insertion (and reinsert more proximally on thumb metacarpal)

i.  Unlike congenital syndactlyly, there is not enough laxity or surrounding tissue for reconstruction.

a.  Pollicization if index finger not involved

b.  A single-stage bilateral transposition flap can be used to restore the nail fold

1.  Perineal webs result from burn to genitalia and perineum and deep burns to proximal thigh

4.  Labia and scrotum: Release of webbing and skin grafting

1.  Based on the complexity, depth, and severity of the contracture, a classification system was developed to describe each toe burn scar contracture as mild, moderate, or severe (Table 57-2).

2.  Mild: Superficial tissues only. Treatment: scar excision or rearranging the local tissue, that is, with a Z-plasty burn scar release.

A.  Lack of donor sites makes this significant area of interest.

B.  Epidermal replacement has already been achieved with expansion of keratinocytes

1.  Takes longer to vascularize and more prone to infection

2.  If graft does take, it is very thin and fragile

3.  Squamous cell carcinoma have been reported from these grafts

6.  Burned toe reconstruction may require release of tendons and joints depending on severity of the contracture.

1.  What angle should you set up the limbs of a Z-plasty?

2.  What are you gaining by doing a Z-plasty?

Gaining length at the expense of width.

3.  What flap is ideal to improve a web space contracture of the thumb?

4.  How do you fix burn syndactyly?

5.  What tissue is best to use for FTST to the upper lid?