B.  Meet the patients needs: Breast reconstruction is elective, patient preferences should play a large role in decision-making

III.  PATIENT HISTORY: WHAT TO ASK AT THE FIRST CLINIC VISIT

3.  Surgeries that affect the use of certain donor sites: Scars on abdomen, back, buttock, and thighs

A.  Height, weight, and BMI

D.  Location of any scars

A.  Timing of reconstruction

1.  Immediate: Reconstruction done at the same time as mastectomy

b.  Low risk of needing radiation (based on cancer stage or negative sentinel lymph node biopsy)

b.  Known need for radiation

B.  Type of reconstruction

a.  Immediate implant: Placement of silicone or saline implant at the time of mastectomy

i.  Few patients are candidates for this: Must have a large, good-quality skin envelope

ii.  Patient must be willing to accept smaller breasts

iii.  Often requires the use of large acellular dermal matrix for coverage of inferior implant

i.  Most common type of reconstruction

iii.  Intraoperatively, may start filling TE if mastectomy flaps will tolerate without too much tension.

iv.  If drains are placed, can start expansion 1 week after drain removal, usually 2 to 3 weeks post-op.

v.  Expansions occur weekly, typically 60 to 120 cc saline injected each time, depending on the patient tolerance of expansion.

vi.  Most patients require four to eight expansions depending on the size of expander and patients desired final size.

vii.  Must overexpand by 10% or more past patients goal size to account for recoil at the time of expander removal.

viii.  Once expansion is complete, one must wait for several months to allow the expanded skin to settle into new position prior to placing permanent implant.

ix.  At a second stage, tissue expander is exchanged for permanent silicone or saline implant

a)  Revisions to pocket made at this time: Capsulotomies, IMF adjustments (resuspension or lowering as needed), and skin tailoring

b)  For unilateral reconstruction, opposite breast surgery can be done at this time: Mastopexy, reduction, and augmentation

a)  Very rare lymphoma may be associated with implants, <40 cases reported worldwide. Course is more benign than patients without breast implants who develop ALCL.

b)  Patients who develop late seroma (>6 months from implant placement) should be worked up with aspiration and pathologic diagnosis.

i.  *Type V flap: Blood supply from (1) thoracodorsal artery (off subscapular) and (2) intercostal perforators. Thoracodorsal is primary blood supply for use in breast reconstruction.

a)  Thoracodorsal artery enters latissimus muscle 8.7 cm distal to origin of subscapular artery and 2.6 cm medial to the lateral border of muscle 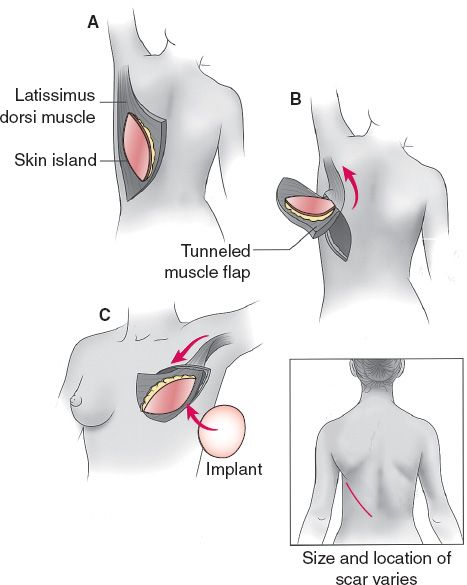 Figure 37-3. Latissimus dorsi flap reconstruction. A: A skin island overlying the latissimus dorsi muscle is designed, and the flap is elevated. B: The flap is tunneled through the axilla to the chest. C: The flap is inset on the chest, and an implant or tissue expander is placed. (From Mulholland MW, ed. Greenfield’s Surgery. 5th ed. Philadelphia, PA: Lippincott Williams & Wilkins; 2011.)

b)  Upon entry into latissimus, artery splits into lateral and medial branches.

c)  If thoracodorsal vessels are damaged, latissimus can also survive on retrograde flow from serratus branch.

ii.  Latissimus muscle is harvested with an elliptical skin paddle from the back (up to 10 cm wide will close primarily).

i)  Based off superior epigastric artery

iii)  Muscle and skin flap are turned and passed through a subcutaneous tunnel at the IMF up to mastectomy defect to create new breast mound.

iv)  Delay 1 to 2 weeks prior to operation by ligating deep inferior epigastric artery and vein might improve outcomes by increasing size and flow through superior epigastric vessels. 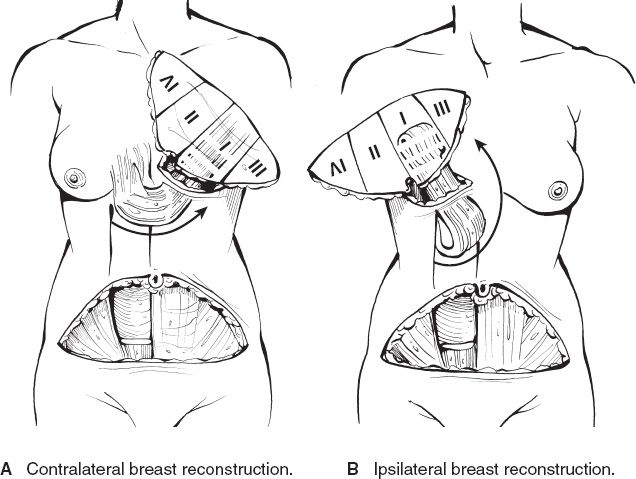 i)  Rectus muscle is detached completely with transverse skin island and transferred to the chest as a free flap.

ii)  Anastomosis between deep inferior epigastric and IMA or thoracodorsal.

i)  Transverse abdominal skin is transferred with a strip of rectus muscle overlying blood supply, leaving behind most of rectus.

a)  Free transverse island of abdominal skin and subcutaneous tissue with no muscle.

b)  Blood supply via perforators from deep inferior epigastric artery.

c)  If lateral and medial perforators present, can place clamp on one or the other and observe which one leads to better looking flap or use intraoperative imaging of perfusion.

a)  Free transverse island of abdominal skin and fat only with no violation of fascia.

b)  Blood supply via SIEA off femoral artery.

f)  Good to preserve these vessels even if not using it as the primary pedicle. SIEV can serve as a lifeboat if free TRAM or DIEP has venous congestion.

iv.  Skin paddle up to 13 cm wide can be closed primarily 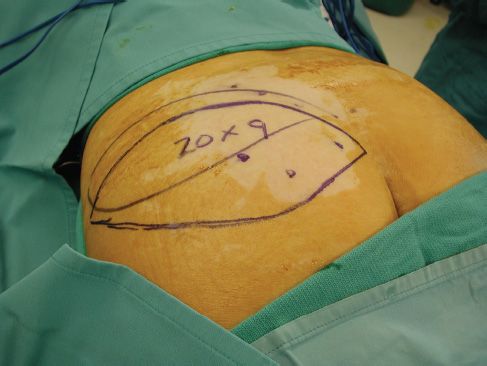 i.  Free semilunar flap from upper thigh located one fingerbreadth below groin crease, centered over upper portion of gracilis muscle.

iii.  Rarely used due to small size unless other options are unavailable.

A.  Commonly 2 to 3 months after final breast mound reconstruction complete

1.  Nipple sharing: Graft from opposite nipple

5.  Biggest problem with all techniques is loss of papule projection, 50% or more, after 1 year. Many surgeons will overcompensate initially to account for loss over time. 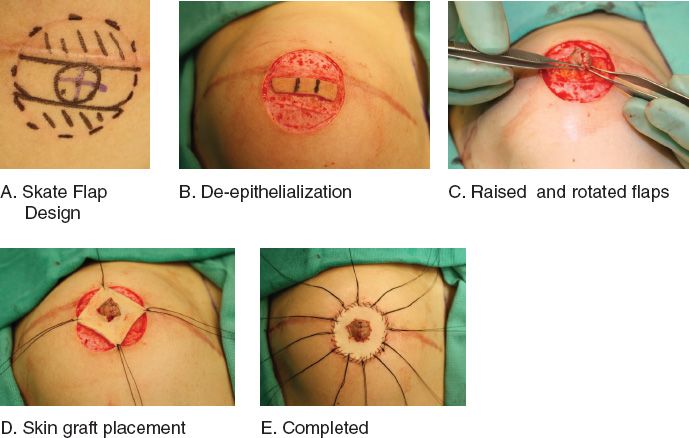 3.  Can also do in situ skin graft by lifting the skin surrounding papule and then sewing back down

2.  Two initial pieces of information can quickly narrow available options—History/plan for XRT (must use autologous tissue, or TE/implant with latissimus “protection”; and amount of infraumbilical lipodystrophy (too little or too great can negate use of TRAM variations)

4.  Check the continuity of the thoracodorsal artery when raising a latissimus flap in a patient who has had an axillary dissection. The muscle can possibly still be pedicled on the serratus branch (know arterial tree in this location) if necessary.

5.  Do not hesitate to delay immediate reconstruction if there is questionable viability of the mastectomy flaps: Flap necrosis over a reconstruction can be devastating

1.  What is the blood supply to the TRAM flap?

3.  Name some options for nipple reconstruction, and be able to draw them.

Markings for a nipple reconstruction flap