– BIOPHYSICAL MEASUREMENT AND EVALUATION OF SKIN ELASTICITY AND TOPOGRAPHY

The skin is the only organ of the human body that allows an assessment by sensory perception: seeing and feeling. However, the quality of this subjective assessment strongly depends upon the clinical experience of the investigator and while “one picture is worth a thousand words,” it is, unfortunately, prone to bias and inter-observer variation. Further, some subclinical morphological changes and physiological processes of the skin are not visible to the naked eye or cannot be assessed by tactile senses. Biophysical measurement systems fill this gap, as they allow a highly objective measurement of functional and morphological skin conditions. Since cosmetic science has become a field of high-tech research and development, biophysical measurement systems are an essential part of the evaluation process to determine the efficacy of ­cosmeceuticals.

Nowadays, a broad range of highly specialized skin care products are available on the market for any imaginable indication and consumer need. However, anti-aging products that target the signs of aging are still the most important category when it comes to cosmeceuticals.

Aging of the largest organ in the body, the skin, is a complex process that comes along with the natural aging process of the human body and results in ­several functional and aesthetic changes of the skin.

Two main mechanisms, atrophy and changes in the architectural organization of the dermal connective tissue, are involved in lifetime alterations of the human skin. They lead to a progressive loss of elasticity and the development of facial wrinkles. These signs are considered to be the most visible changes due to aging, and are therefore strongly related to the development of numerous anti-aging treatments and cosmetic procedures. In this context, biophysical measuring methods to objectively evaluate skin topography and elasticity are of particular interest for the assessment of anti-aging skin care.

a.  Quantitative assessment of skin topography

a.  Quantitative assessment of skin elasticity

The skin surface is a polygonal relief consisting of furrows, wrinkles and wavelike structure representing the three-dimensional organization of epidermis, dermis, and subcutis. It is influenced by a wide range of morphologic characteristics such as the thickness of the stratum corneum, the amount of collagen in the dermis, or the size and structure of subcutaneous fat cells [1; 2].

The skin surface relief is characterized by typical patterns of intersecting lines and regularly dispersed follicular and eccrine duct openings. Primary and secondary lines form a criss-cross pattern consisting of triangles and parallelograms that are particularly well marked on the back of the hand and forearms. The tertiary lines correspond to the edges of epidermal corneocytes and are, with a depth of <0.5 µm, not visible to the human eye. The quaternary lines are also exceedingly thin, forming a discrete trabecular network on the corneocyte membrane itself [3; 4].

Due to the aging process the skin relief changes strongly (Figure 1); whereas some lines become more marked which results in the development of wrinkles, other lines flatten and disappear with aging. Although, a generally accepted definition of the term “wrinkles” does not exist, they loosely can be classified in crinkles and linear rhytides [4; 5]. Whereas crinkles disappear when the skin is slightly stretched, linear rhytides will still be visible [6]. 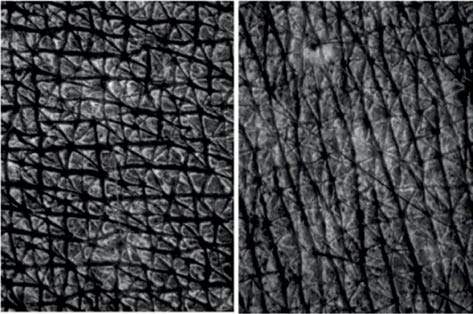 Figure 1: Skin topography, imaged by Visioscan®, at the forearm of young (left) and older (right).

a. Quantitative assessment of skin topography

Over the years, many quantification methods have been developed to objectify skin topography, including two-dimensional (2D) morphological analysis of skin replicas as well as fringe projection method that can be used directly without ­replicas [1; 7]. Recently, three-dimensional (3D) photogrammetry, also known as stereophotogrammetry, has been added to the armamentarium to noninvasively assess skin topography.

Profilometry [8] and shadowing method [9] represent techniques using two-dimensional analysis of replicas to evaluate skin surface topography. The most widely used material in the preparation of skin replicas is a monomeric silicone polymer (Silica®, J. & S. Davis, Hertfordshire, UK) that is mixed with a thinner and a catalyzer. Fluidly applied, it spreads onto the skin surface by virtue of its low interfacial energy. At body temperature, it quickly polymerizes to a rubbery mass without noticeable heat of reaction. As the silicone is not hard enough to allow the mechanical measurement, a hard counter-replica has to be prepared [4].

A mechanical profilometer is a stylus instrument that is used to measure skin surface roughness [8; 10]. The profilometry technique scans the micro-relief of the skin replica with a diamond stylus moving at a constant speed horizontally across the samples. Therefore, deflections and movements of the stylus’s tip are directly transformed into an electrical signal as the stylus is moved across the surface. Usually the diamond stylus has a conical shape with a diameter of 5 to 20 µm [1]. The precision of the measurement directly depends on the size of the diameter; the larger the diameter, the more imprecise the measurement, so the narrowest lines or steep increases cannot be precisely scanned [4; 11]. 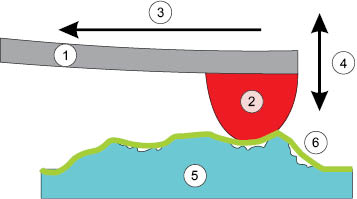 An advancement over mechanical profilometry is optical laser profilometry [12]. This noncontact technique is based on the principle of dynamic ­focusing: a lens focuses a spot of reflected laser light onto a photodetector, which generates a signal that is proportional to the spot’s position on the ­detector. As the target’s surface height changes, the image spot shifts due to the parallax [1]. 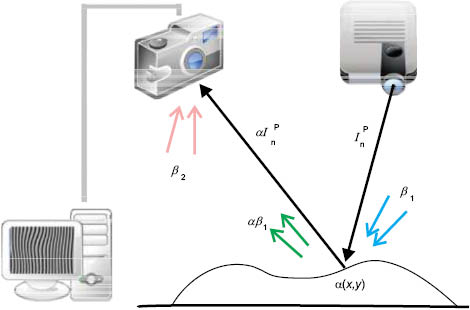 The profiles of roughness and waviness assessed by mechanical or optical profilometry are calculated by a computer software such as MapVUE® (KLA Tencor, Milpitas, USA) or Nanovea 3D (Irvine, USA). This technique generates a variety of useful surface parameters that correspond to the international standardization ISO 4284/4287. They include parameters such as Ra (mean value of roughness), Rmax (maximum single depth of roughness), Rz (mean of five measurements of depth of roughness) [1].

Profilometry techniques have the advantage of assessing skin topography with a high degree of accuracy and precision (<0.5 µm), but the scanning of skin replica is very slow [4] and large skin structures such as cellulite cannot be evaluated. Due to the mechanical load on the skin replica, material properties can be changed so that further measurements might be defective [11]. In addition, the preparation of replicas is often defective, and there is a high risk of losing accurate morphological information during the replication process [1; 9].

A more rapid method employed to assess skin topography is the shadowing method (also: shadowing casting method), which was developed in the early 80s. This imaging technique is contact free and is also based on the evaluation of empirical parameters generated from skin replicas [9].

The replica of the skin surface is irradiated by a parallel-beam light source with a defined incident angle. Bot, the light intensity and its incident angle, significantly influence the measurement and have to be chosen according to the depth and density of the relief [4]. The generated pattern of light and shadows is optically recorded by a camera. In order to assess the structure of the whole skin replica, the object is slowly rotated and imaged after every movement [13]. The underlying technique is based on the principle of triangulation.

The principal advantage of the shadowing method is that the imaging survey is about 15 times faster by comparison to the profilometry technique—whereas at the same time, a larger area can be assessed. It is further contact-free, so that the skin replicas are not altered during the measurement. A disadvantage of the method is that small structures can probably not be assessed precisely because large structures obliterate smaller structures [9; 14]. Also, the individual adjustment of the angle of the incident light as well as the intensity of lighting in general might contain errors [4]. 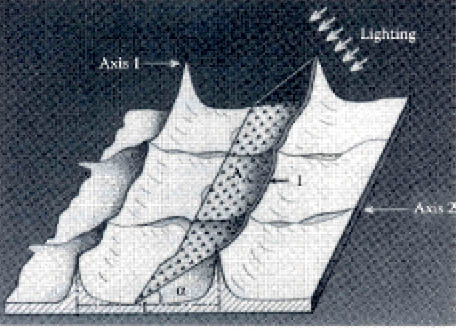 Recently, digital 3D photogrammetry, also known as stereophotogrammetry, has become available for the noninvasive capturing of skin topography. This method is based on a group of cameras that capture two or more images of the same subject from different angles simultaneously. The digital processing of the captured images allows the three-dimensional reconstruction of the surface, which can be quantified in terms of angles, surface areas, and volume [15; 16]. For the assessment of anti-wrinkle products, the volume parameter has become one of the most important parameters as it is most suitable to show a change in overall wrinkle severity before and after a treatment. While the technique is only minimally sensitive to changes in the skin reflection, hair and other small objects on the skin surface are a common cause of artifacts and should therefore be removed carefully before images are taken.

Several devices with this technique are commercially available. The most commonly used system in cosmetic science is the VECTRA® M3 Imaging System (Canfield Scientific, USA). This system consists of three pods with two cameras and one flash each and a connected computer system. Synchronized 2D images of the subjects with 36 megapixels are captured with the six cameras within 3.5 milliseconds. The subsequent 3D reconstruction process is displayed on the monitors and takes up to several minutes. After completion, the 3D model will be mapped with 2D textures and the captured structure can be rotated in all three dimensions. The acquired 3D coordinates can be used to calculate distances between points allowing the measurement of volumetric changes [17; 18]. Several 3D models can be matched by manually selecting landmarks to provide the system with reference points [15; 16].

3D photogrammetry is capable of accurately reproducing the surface geometry of the human face, and map realistic color and texture data to the geometric shape [19; 20]. However, published studies evaluating reproducibility and ­accuracy of the 3D analysis show a measuring accuracy of less than 1 mm [15; 18; 20]. As age-related changes in skin topography are characterized by typical patterns in the micrometer range, stereophotogrammetry is not suitable as a measuring device for wrinkles or small volume changes yet [21]. Nevertheless, photogrammetry systems already have a great impact in the field as they are particular suitable for the clinical rating of skin statuses before and after a treatment [16; 18; 22].

The latest generation of 3D measuring instruments makes it possible evaluate morphological structures of human skin rapidly, precisely, and directly in vivo. This so-called fringe projection method is based on the digital projection of a striped pattern in a defined angle onto the skin in vivo. By analysis of the distortions of the striped pattern it is possible to reconstruct the three-dimensional structure of the skin [23–25] (Figure 4). 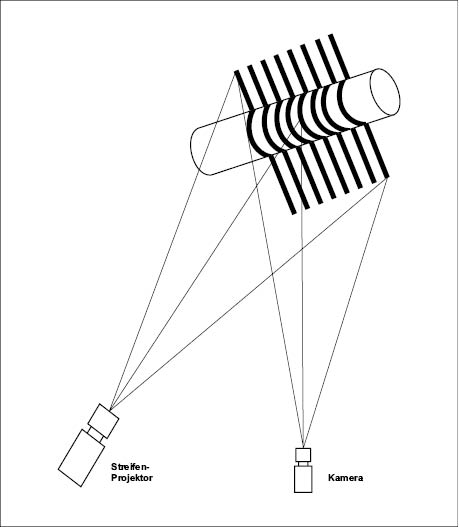 The most commonly used device in the field of cosmetic science is the PRIMOS®-System (Phaseshift Rapid In Vivo Measurement of the Skin) produced by GFMesstechnik GmbH (Teltow, Germany). An alternative device based on the same principle is the 3D Breuckmann Scanner (Breuckmann GmbH, Germany).