Sebaceous Glands at a Glance

Anatomy of the Sebaceous Gland

Sebaceous glands are unilobular or multilobular structures that consist of acini connected to a common excretory duct, which is composed of stratified squamous epithelium. Sebaceous glands are composed of lipid-producing sebocytes and of keratinocytes that line the sebaceous ducts and are usually associated with a hair follicle. The periphery of the sebaceous gland is a basal cell layer composed of small, cuboidal, nucleated, highly mitotic sebocytes. Cells progress toward the middle of the gland and accumulate lipid droplets as they terminally differentiate. These fully differentiated sebocytes are full of lipid and lack all other cellular organelles (Fig. 79-1). Surrounding the glands are connective tissue capsules composed of collagen fibers that provide physical support.1 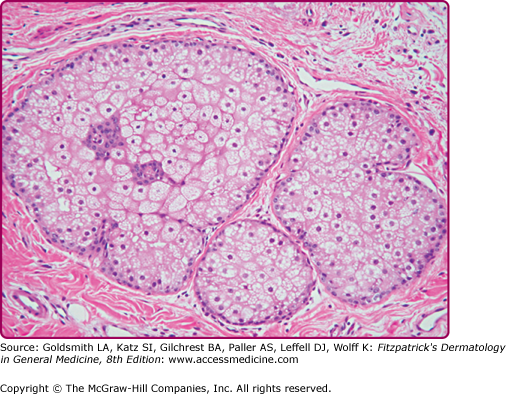 Hematoxylin and eosin-stained section of the human sebaceous gland showing its multilobular structure.

In the human fetus, sebaceous glands develop in the 13th to 16th week of gestation from bulges (epithelial placodes) on the developing hair follicles. The bulge region of the follicle contains the epidermal stem cells that generate multiple cell lineages, including epidermal and follicular keratinocytes, as well as sebaceous glands. As daughter cells migrate from the bulge region, changes in the expression patterns of numerous transcription factors determine their final cell lineage. Wnt/wingless (Wnt) and Sonic Hedgehog (Shh) signaling pathways are intricately involved in embryonic patterning and cell fate decisions. Cells destined to become sebocytes have increased Shh and Myc signaling and decreased Wnt signaling (Fig. 79-2). In transgenic mouse models, intact Wnt signaling promotes hair follicle differentiation, whereas inhibition of Wnt signaling by preventing the Lef1/B-catenin interaction leads to sebocyte differentiation.4 Loss-of-function and gain-of-function transgenic mouse models demonstrated that blocking Shh signaling inhibited normal sebocyte differentiation and constitutively activating Shh signaling increased the number and size of sebaceous glands in skin.5 When fully formed, the glands remain attached to the hair follicles by a duct through which sebum flows into the follicular canal and eventually to the skin surface. 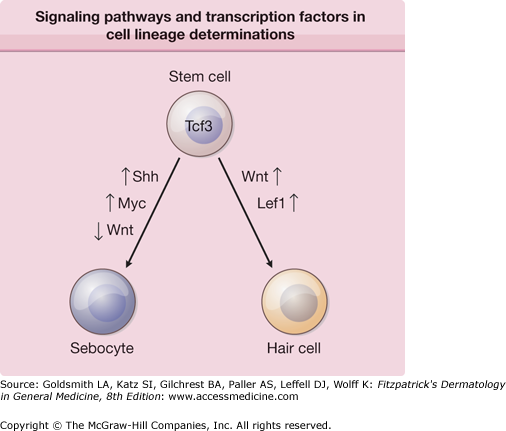 Physiology of the Sebaceous Gland

The sebaceous glands exude lipids by disintegration of entire cells, a process known as holocrine secretion. The life span of a sebocyte from cell division to holocrine secretion is approximately 21–25 days.6 Because of the constant state of renewal and secretion of the sebaceous gland, individual cells within the same gland are engaged in different metabolic activities dependent upon their differentiation state.7 The stages of this process are evident in the histology of the gland.8 The outermost cells, basal cell layer membrane, are small, nucleated, and devoid of lipid droplets. This layer contains the dividing cells that replenish the gland as cells are lost in the process of lipid excretion. As cells are displaced into the center of the gland, they begin to produce lipid, which accumulates in droplets. Eventually the cells become greatly distended with lipid droplets and the nuclei and other subcellular structures disappear. As the cells approach the sebaceous duct, they disintegrate and release their contents. Only neutral lipids reach the skin surface. Proteins, nucleic acids, and the membrane phospholipids are digested and apparently recycled during the disintegration of the cells.

Human sebum, as it leaves the sebaceous gland, contains squalene, cholesterol, cholesterol esters, wax esters, and triglycerides (Fig. 79-3). During passage of sebum through the hair canal, bacterial enzymes hydrolyze some of the triglycerides, so that the lipid mixture reaching the skin surface contains free fatty acids and small proportions of mono- and diglycerides, in addition to the original components. The wax esters and squalene distinguish sebum from the lipids of human internal organs, which contain no wax esters and little squalene. However, human sebaceous glands appear to be unable to cyclize squalene to sterols such as cholesterol. The patterns of unsaturation of the fatty acids in the triglycerides, wax esters, and cholesterol esters also distinguish human sebum from the lipids of other organs. The “normal” mammalian pathway of desaturation involves inserting a double bond between the ninth and tenth carbon of stearic acid (18:0) to form oleic acid (18:1Δ9). However, in human sebaceous glands, the predominant pattern is the insertion of a Δ6 double bond into palmitic acid (16:0). The resulting sapienic acid (16:1Δ6) (Fig. 79-3) is the major fatty acid of adult human sebum. Elongation of the chain by two carbons and insertion of another double bond gives sebaleic acid (18:2Δ5,8), a fatty acid thought to be unique to human sebum.9 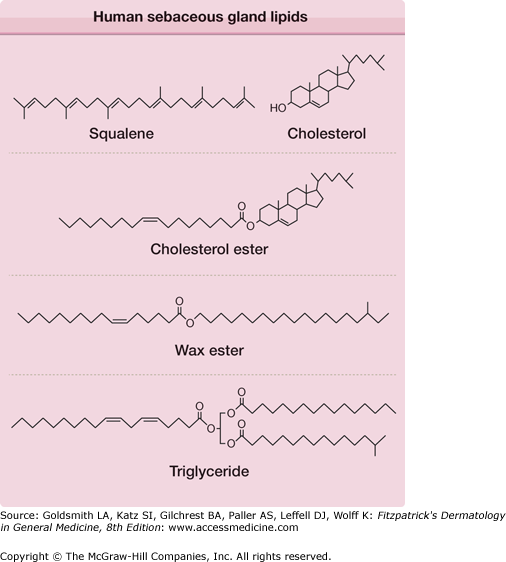 Sebaceous fatty acids and alcohols are also distinguished by chain branching. Methyl branches can occur on the penultimate carbon of a fatty acid chain (iso branching), on the third from the last (antepenultimate) carbon (anteiso branching), or on any even-numbered carbon (internal branching). Examples of these unusual unsaturated and branched-chain moieties are included in the lipid structures in Fig. 79-3.

The precise function of sebum in humans is unknown. It has been proposed that its solitary role is to cause acne.10 It has been suggested that sebum reduces water loss from the skin’s surface and functions to keep skin soft and smooth, although evidence for these claims in humans is minimal; however, as demonstrated in the sebaceous gland-deficient (Asebia) mouse model, glycerol derived from triglyceride hydrolysis in sebum is critical for maintaining stratum corneum hydration.11