The right-handed surgeon should stand on the right side of the operating room table to facilitate manipulation through both the right and left nares with either the head in a neutral position or gently moved from side to side.

Open Approach: The open approach to rhinoplasty involves exposure of the subcutaneous structures by incising the skin across the columella, continuing the incision along the mucocutaneous junction behind the columella, upwards behind the soft triangles, and then around just inferior to the caudal edge of the lower lateral cartilages. In the technique described, the entire nasal covering is elevated so that specific maneuvers may be performed to restructure and reshape the nose.

The choice of incision across the columella is purely one of preference and is placed roughly at the narrowest portion. Some surgeons prefer a stair-step incision (Figure 9-1), while others prefer a gull-wing–shaped incision (Figure 9-2). A straight line is usually avoided since the scar often remains more noticeable. A #15 scalpel blade is used for the horizontal portions of the incision and can certainly be used for the entire incision, however. The pointed tip of a #11 blade is often preferable for the vertical portion with the incision in this limb made with a controlled stabbing motion. Care must be taken not to damage the underlying medial crura of the lower lateral cartilages. These often lie close to the skin surface and are prone to injury when incising the skin. 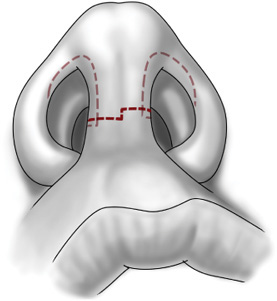 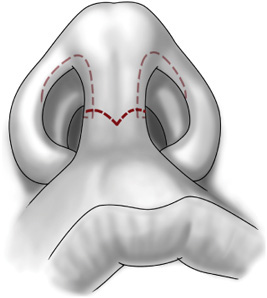 It is important to create a 90-degree transition from the horizontal portion of the incision across the columella to the vertical portion along the mucocutaneous junction behind it (Figure 9-3). This will help maintain the integrity of the columella by again minimizing contracture as well as visibility of the scar. It is helpful to mark this 90-degree angle to ensure its accuracy. 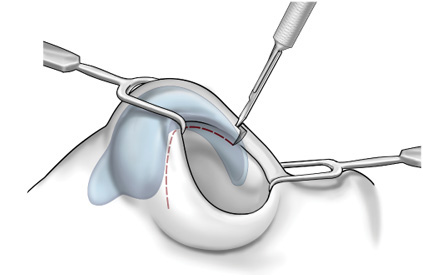 Figure 9-3. Transition of the columella incision from anterior to lateral. 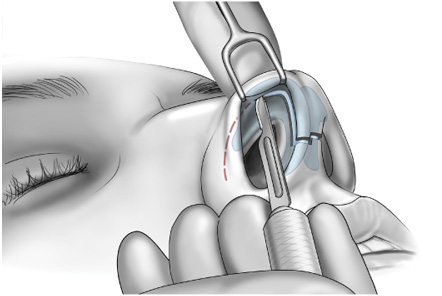 Figure 9-4. Alar rim portion of the incision along the inferior margin of the lower lateral cartilage.

Once the incisions are made, a sharp iris scissors is advanced beneath the columellar incision from right to left in a plane between the underlying cartilage and the subcutaneous tissue. Placing a gloved finger over the skin of the columella and palpating the scissor tip as it crosses from one side to the other will determine the correct depth since the scissors will be palpable beneath the skin if they are kept superficial to the cartilage. With gentle spreading of the scissor tips, the correct plane is created. The scissor tips should exit on the left side of the columella within the vertical incision already made with the scalpel (Figure 9-5). The skin is then completely incised with the scissors protecting the cartilage below and retracted superiorly. 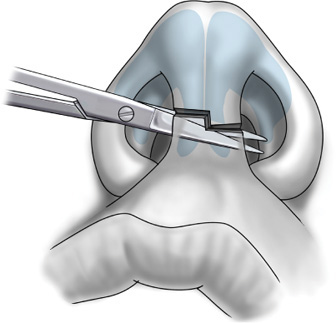 Figure 9-5. Fine iris scissor being passed under the skin and over the lower lateral cartilages.

Care should be taken not to grasp the thin tip of the columella but rather to retract it with a fine double hook as the underlying soft tissues are divided. The plane above the lower lateral cartilages is identified and followed superiorly onto the tip. Placing the tips of the scissors directly onto the surface of the cartilages and gently spreading the soft tissues will determine the correct plane, which is just above the perichondrium (Figure 9-6). Laterally, dissection can be initiated by placing the tips of a curved iris scissors perpendicular to the incision line and gently spreading. One tip should be just inferior to the caudal edge of the lower lateral cartilage and the other against the opposing edge if the incision. This maneuver should easily provide entrance into the proper dissection plane. The white color of the lower lateral cartilages should be easily visible. The middle and lateral crura are often more substantial than the medial crura, making identification somewhat easier (Figure 9-7). Soft tissue dissection should be directly on the surface of the cartilage and all soft tissue elevated from it. This plane facilitates a dry operative field and minimizes postoperative bruising. The soft tissue between the lower lateral cartilages is excised as dissection proceeds towards the nasal tip. 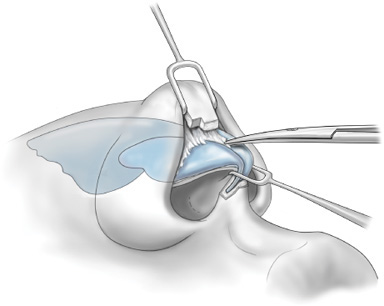 Figure 9-6. Elevation of the soft tissue off the perichondrium of the lower lateral cartilage. 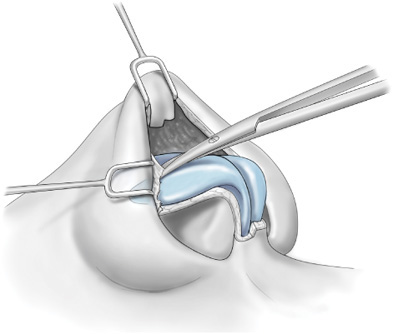 Figure 9-7. Exposure of the nasal tip above the lower lateral cartilages.

Using a double-prong hook and a finger to evert the skin, excess fibrofatty tissue can be removed from the tip, if necessary. Caution should be taken to not damage the subdermal plexus and gentle cautery used to control bleeding so as not to injure the overlying skin. A needle tip cautery set between 10 to 15 works well.