Indications: Certain patients may have insufficiency of the lower lateral cartilage resulting in either functional or aesthetic abnormalities. In such cases, autogenous cartilage will provide adequate replacement or augmentation to deficient, weak, or deformed tip cartilage. Cartilage can be harvested from the septum (if available), ear, or costal margin for placement as a graft in these patients. In other patients, notching of the alar rim may be managed by placing a graft to span the area of the notch.

Assessment and markings: Although there are no specific markings that need to be made, a thorough dimensional analysis of the patient’s existing nasal tip projection and rotation should be performed. There are many tip grafts described in the literature, and the most useful and their indications will be described in this section.

Approach: The tip region may be approached via either an open or a closed technique. The open approach will utilize a transcolumellar incision extended along each alar rim distal to the inferior edge of the lower lateral cartilages.

Technique: The shield graft derives its name from its roughly triangular shape. It is used to provide definition and projection to the nasal tip (Figures 25-1 and 25-2). The shape and size of the graft are determined from the patient’s anatomy. The length is roughly determined from the junction of the lobule and columella to a point just above the desired projection. The width at the inferior aspect is slightly narrower than that of the columella. The width at the superior aspect is determined so as not to produce too narrow or too boxy a tip.1 If the graft is noted to be too angled, the edges should be beveled to minimize show. If too rigid, it can be softened by gentle crushing prior to being sutured into place. 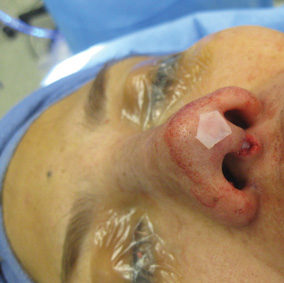 Figure 25-1. Position of the shield graft. 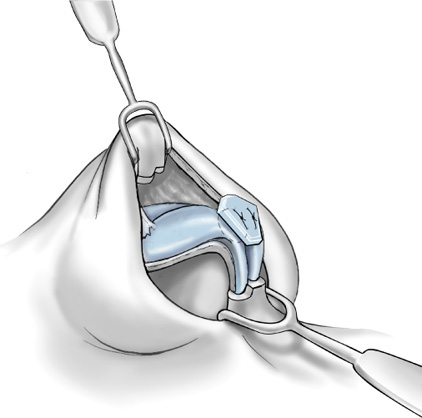 Additional tip grafts can be placed superior to the shield-type graft to further define the nasal tip and improve tip projection.2 Several grafts have been described: cap graft (small graft placed between tip defining points), umbrella graft (vertical columellar strut combined with a horizontal onlay graft), onlay tip graft (horizontal graft placed over alar domes), and others. These are all variants of cartilage grafts placed on the nasal tip in slightly different locations.3