Indications: In contrast to excision, techniques for suturing cartilage have the advantage of being nondestructive and reversible. Patients in whom the lower lateral cartilages are deformed or malpositioned require reconstruction, which in some part relies on sutures placed either within the domes of the cartilages, between the domes of the middle crura, and/or from the cartilages to surrounding structures. Sutures are frequently used to alter the curvature or position of the cartilage (Figure 24-1). Common maneuvers address domes that are too wide or domes that are situated too far from each other. Patients in whom these maneuvers are particular useful are those with wide or boxy tips. Similar techniques may be used for lateral deflections of the septum. 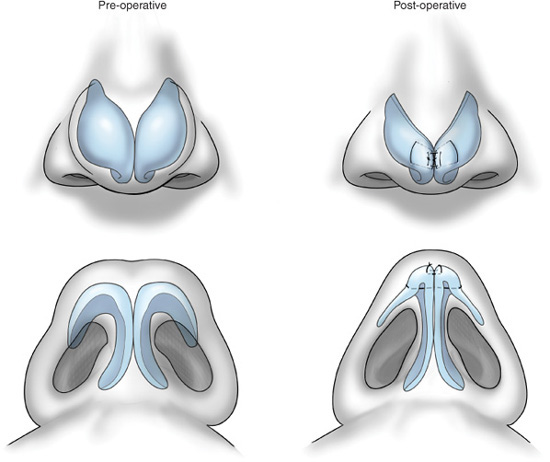 Markings: Preoperatively, the position of all three components of the lower lateral cartilages should be identified beneath the skin envelope. The medial crura extend predominantly up the length of the columella. They may or may not contribute to excessive show of the columella on lateral view. The middle crura are perhaps the most visible and form the tip-defining points on frontal view. The lateral crura may extend along the alar rims and rotate superiorly.

Approach: Access to the lower lateral cartilages may be achieved via an open or closed approach to the nasal tip. However, many surgeons believe that better exposure is afforded by the open approach. Recent reports have outlined combined approaches that spare the patient a transcolumellar incision but allow adequate visualization of the nasal tip.1 The anatomy of the lower lateral cartilages should be carefully assessed to determine if the pathology is due primarily to a widened dome arc, increased divergence between the two domes, or a combination of the two.2,3

Technique: The choice of suture for tip modification is a personal one. The material should pass easily through the cartilage causing the least trauma and last long enough to prevent relapse. Either a permanent, monofilament suture, such clear nylon, or a long-acting dissolvable suture, such as polydioxanone (PDS) may be used. Shorter acting sutures, such as plain gut, and braided sutures, such as polyglactin (Vicryl®), are not recommended.

A medial footplate suture is a mattress suture that approximates the medial crura. Intervening soft tissue is usually dissected prior to suture placement to maximize the degree of columellar narrowing and minimize the inferior protrusion of the columella (columellar hang).