Bartonellosis at a Glance

Bartonella are Gram-negative bacilli, with the remarkable capacity for intraerythrocyte persistence and the production of bacteremia. Until the 1980s, Bartonella were felt to only cause a rather exotic illness, Carrion disease. Since the description of a peculiar vascular proliferation in patients infected with Human Immunodeficiency Virus (HIV) infection, the number of identified Bartonella sp. has been rapidly expanding. The genus includes three important species that are human pathogens: (1) Bartonella henselae, the cause of most cases of cat-scratch disease (CSD) as well as some cases of bacillary angiomatosis (BA), hepatic and splenic peliosis (cystic blood-filled spaces in hepatic lobules or the splenic parenchyma), and endocarditis; (2) Bartonella quintana, the cause of trench fever, urban trench fever, BA, and endocarditis; and (3) Bartonella bacilliformis, the cause of Carrion disease and its eruptive phase known as verruga peruana (VP). Other potential human pathogens are Bartonella elizabethae and Bartonella vinsonii, which cause endocarditis, Bartonella grahamii, a cause of neuroretinitis, and Bartonella washoesis, which causes myocarditis (Table 182-1).1 Infections caused by most Bartonella are associated with arthropod vectors that may simultaneously carry several species. Adaptation to specific vectors and reservoirs seems to be a common strategy of Bartonellae for transmission and host diversity. At least one mammal host is known for every one of the Bartonella species identified to date.2 Human beings are the exclusive hosts for B. bacilliformis and B. quintana, whereas in the case of B. henselae, the cat is the host of choice with man being a more accidental host. Asymptomatic bacteremia rates in primary vertebrate (reservoir) hosts may exceed 50%. This suggests high prevalence of infection and prolonged and persistent bacteremia as characteristics of Bartonella infection. The extent of disease caused by B. henselae will depend on the integrity of the immune system: if the person affected is immune competent, the clinical presentation can be a lymphocutaneous syndrome. If the person affected is immune deficient, the disease will be systemic and very similar to that seen in Carrion disease. 3

Table 182-1 Bartonella Species and the Diseases They Cause

Table 182-1 Bartonella Species and the Diseases They Cause

The genus Bartonella contains organisms previously in the genuses Rochalimaea and Grahamella. Bartonella organisms are small aerobic, fastidious, pleomorphic, Gram-negative bacteria; they are difficult to culture from clinical samples. Initial clinical isolates grow slowly and visible colonies may not be detected for weeks, but subsequent passages grow much more rapidly. The organisms are short rods, ranging from 0.3 to 0.5 μm wide by 1.0–1.7 μm long. The organisms are best visualized in tissue using modified silver stains (Warthin–Starry). Polymerase chain reaction (PCR) and immunohistochemistry can also detect infection.4,5

The family of Bartonella keeps expanding. A new species, Bartonella rochalimae6 has recently been described as causing a febrile illness with splenomegaly in a tourist visiting Peru.

Cat-Scratch Disease at a Glance

Approximately 29.2 million households (31%) in the United States own a cat, averaging close to two cats per household, for a total household cat population of 57 million. This large population of domestic cats explains the more than 22,000 cases of CSD reported annually. Although cats behave as adapted hosts, they also can develop a systemic bacteremic illness. CSD affects persons of all ages, although 60%–90% of classic cases are reported in children and young adults. CSD is seen worldwide and does not appear to have a racial prevalence. Veterinarians may be a particular group at risk.7 Most patients with CSD recall a history of cat contact, but this is not absolute (90.3%–99.1%). The incidence of CSD is slightly higher in males and it occurs seasonally, mostly between July and October.8–10

CSD is associated with exposure to a cat, usually a kitten. The method of spread from cat to human is usually a scratch or bite. In California, 39.5% of cats are bacteremic for B. henselae with a single sampling, indicating a very high infection rate. Infection in cats is a worldwide phenomenon, as shown by seroprevalence studies in cats in Sao Paulo, Brazil revealing 46% reactivity to Bartonella spp.7 Bacteremic cats were more likely to be stray cats, young (less than 1 year old), and flea infested. Seroprevalence for B. henselae is as high in pet cats as in shelter and feral cats.11 The seroprevalence of B. henselae among pet cats in North America is 27% overall but highly variable, with a higher seroprevalence in warm rainy regions. When the geographic seroprevalence of B. henselae is compared with predicted estimates of cat flea populations on the basis of temperature and humidity, there is considerable overlap, supporting the role of the cat flea (Ctenocephalides felis) as the arthropod vector among cats. B. henselae can be transmitted from cat to cat via the cat flea, cat fleas contain Bartonella organisms after feeding on infected cats, cat flea feces contains viable Bartonella, and cats can be experimentally infected by the intradermal injection of infected cat flea feces.12 The cat flea has not been demonstrated to spread Bartonella infection from cats to humans. Rather, the disease transmission to human is a consequence of traumatic or subclinical inoculation. Cats’ claws and teeth may be contaminated by infected flea feces during scratching and grooming allowing for transmission to humans by scratches.

B. henselae causes the vast majority (more than 95%) of cases of CSD. Two main genogroups have been identified in human and cats: (1) Houston-1 and (2) Marseille (also known as genotype II). These two geno groups are further subdivided into 4 variants: (1) Marseille, (2) CAL-1, (3) Houston-1, and (4) ZF-1.13 The disease caused by all variants is clinically identical.

The clinical spectrum of CSD has expanded since serologic diagnosis has become possible. Less than 10% of patients have a fever higher that 39°C, and one third are afebrile.13 Typical CSD exhibits two components: (1) the primary inoculation papule and (2) adenopathy proximal to the inoculation site. The papule appears at the site of inoculation within 3–10 days of exposure and progresses through an edematous or vesicular and crusted stage. The primary inoculation papule lasts 1–3 weeks. The lymphadenopathy, seen in at least 90% of patients with typical CSD, develops on average 2 weeks after inoculation (range, 3–50 days; Fig. 182-1). The inoculation papule is still present in 60%–90% when the adenopathy develops, making it a valuable diagnostic finding.14 The most commonly affected lymph nodes are axillary, epitrochlear, cervical, submandibular, and groin,13 with 98% of patients having involvement of only one anatomic region. The nodes are generally firm, tender and between 1 and 5 cm in diameter (Fig. 182-2). The lymphadenopathy usually remits spontaneously after several months, although in 20% of cases, the adenopathy lasts longer than 6 months. Recurrences are uncommon. 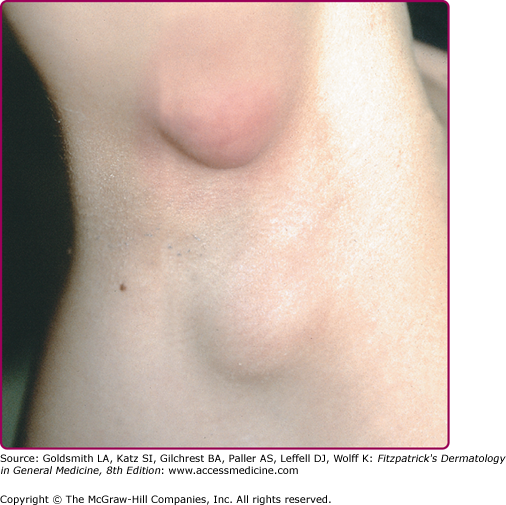 Bartonellosis: cat-scratch disease with axillary adenopathy. Acute, very tender, axillary lymphadenopathy in a child; cat scratches were present on the dorsum of the ipsilateral hand. (Used with permission from Howard Heller, MD.) 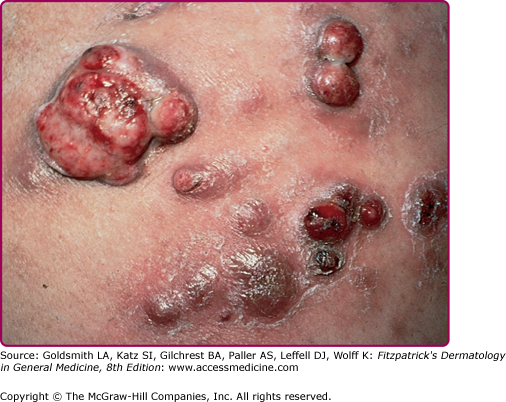 Suppuration of clinical significance occurs in less than 10% of cases, but when affected nodes are followed with ultrasonography, suppuration is found to be the natural course of resorption of affected nodes in nearly all cases.14 Surgical drainage is seldom necessary.

With improved diagnosis, atypical cases of CSD have increased from fewer than 5% of cases to more than 30% of cases in some series.15 The exact prevalence of these atypical presentations is not known, as they are often reported as single cases, and the total number of CSD cases from which they come is unknown. In one pediatric series, a picture of “atypical mononucleosis” with pharyngitis and bilateral cervical adenopathy and thrombocytosis was a common presentation of B. henselae infection.16 One recent study identified B. henselae as the third leading cause of FUO in children, after Epstein–Barr virus infection and osteomyelitis. Exposure to cats is not uniformly reported by patients with fever and Bartonella infection.13 Endocarditis, hepatic and splenic granulomatosis, and massive lymph node enlargement resembling lymphoma are less common presentations.15 Involvement of the terminal ileum may rarely mimic inflammatory bowel disease and intra-abdominal lymphadenopathy may very rarely obstruct the portal vein.17,18

Ocular complications of B. henselae infection have been frequently reported. The Parinaud oculoglandular syndrome consists of fever, regional lymphadenopathy, and follicular conjunctivitis, and is the most common presentation of ocular B. henselae infection. Other manifestations include neuroretinitis, focal retinochoroiditis, arterial and venous occlusion, iridocyclitis, and macular hole.19,20 The most common neurologic complication of CSD is acute encephalopathy, presenting with seizures in 66% and status epilepticus in 10% of patients.21–23

In one study, up to 20% of immunocompetent patients with serologically confirmed CSD had PCR positivity for B. henselae in peripheral blood, suggesting bacteremia may be common.24 Not surprisingly, hematogenous dissemination of B. henselae complicating CSD in immunocompetent persons has been reported to affect bone (osteomyelitis), liver and spleen, lungs (pneumonia, pleural effusion, pulmonary nodules), and the optic nerve.25–27 These lesions may be markedly symptomatic, or, in one case of pulmonary involvement, completely asymptomatic.25 B. henselae not infrequently causes endocarditis in persons with known valvular heart disease, usually affecting the aortic valve, and 90% of patients require valvular surgery as a consequence of severe damage.28

Reactive conditions of the skin and joints may be seen in patients with CSD. Two percent of CSD patients develop erythema nodosum.29 Three percent of patients with CSD suffer a rheumatoid-factor-negative arthropathy of the larger joints of the extremities.30 These patients are older than 20 years of age and two-thirds are female. Twenty percent have lesions of erythema nodosum. In 80%, the arthropathy resolved in 6 weeks, but in 20%, there is a more chronic course averaging 2.5 years.

Routine laboratory findings are nonspecific and usually not helpful, except to exclude other diseases. Patients with CSD may have a slightly elevated white blood cell count and elevated erythrocyte sedimentation rate during the acute phase. Blood cultures are rarely positive when using current testing techniques. PCR of affected lymph nodes may be positive in 30% of cases. Between 80% and 90% of cases of CSD have positive serology for B. henselae at the time of presentation, and many of the seronegative cases are positive 2–8 weeks later. Serologic testing has replaced the CSD skin test as the confirmatory test of choice in cases of CSD. The 2 major serologic diagnostic methods used are indirect fluorescence assay (IFA) and enzyme immune-assay (EIA). Titer levels seems to correlate with the type of disease: titers of IgG >1:50 suggest a diagnosis of acute infection, such as CSD, whereas IgG titers >1:800 suggests a diagnosis of endocarditis.31

Histopathologic examination of CSD lymph node lesions is not specific. Lymph nodes undergo three stages in the formation of a granuloma: (1) enlargement with hypertrophy of the germinal centers and thickening of the cortex; (2) formation of granuloma with invasion of lymphocytes and epithelioid cells; and (3) necrosis and infiltration with neutrophils—all of which may be simultaneously present within a single lymph node. Abscess formation may occur. Organisms can be detected in lymph nodes and primary skin lesions, often in clumps or filaments, usually in or adjacent to areas of necrosis.

In primary skin lesions, microscopic examination reveals necrosis of the epidermis and upper dermis, and dermal inflammation ranging from neutrophil and macrophage infiltration to granuloma formation. Conjunctival lesions have similar histological findings. In a few cases, conjunctival lesions produce proliferating blood vessels and a homogenous eosinophilic to basophilic granular appearance in the background—features similar to those of BA.