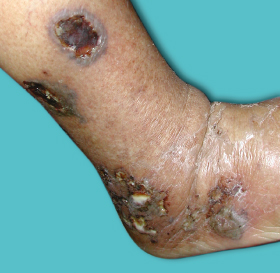 The acute ulcer is superficial and enlarges by breakdown of the surrounding necrotic area, reaching its full size in about 2 weeks. A fully developed ulcer measures 2–6 cm. After a few days the ulcer develops a round, undermined edge with oedema of the surrounding tissues and a granulating base which is covered with a greyish-yellow slough. The acute stage may be accompanied with fever and lymphadenopathy. Acute symptoms and signs (swelling, pain and discharge) disappear and the ulcer occasionally starts to heal spontaneously. Healing begins as re-epithelialization from the margins which show hyperpigmented fibrotic scar tissue (Fig. 66.3). Complete spontaneous re-epithelialization usually takes place within 6 weeks of onset.

The chronic stage results from neglect and lack of adequate treatment of acute ulcers. The persistent chronic stage shows a large ulcer 3–40 cm in diameter which may encircle the entire limb. The ulcer grows deeper, the surrounding oedema and erythema fade, its edge becomes more fibrotic and the base turns paler. Chronic ulcers rarely bleed. The ulcer bed may consist of subcutaneous tissue or even bone. Local and systemic signs are absent. The ulcer shows granulation tissue with secondary changes in the surrounding skin such as hyperpigmentation, atrophy or depigmentation.

Radiological examination of the ulcer in the acute stage shows subcutaneous oedema and soft tissue thickening. Periosteal reaction in the bone beneath the ulcer constitutes the earliest sign of bone involvement. Sometimes an onion-skin or radiating sunburn pattern may simulate osteosarcoma. The underlying bone cortex may show little change but in some early cases the subperiosteal new bone ulcerates and the sequestrum may later be exuded. Sometimes new superficial bone may consolidate and fuse with the underlying cortex. The surface of the dense bone may ulcerate and produce a sharply defined sausage-shaped defect without actual sequestrum formation [26].

The diagnosis can be ascertained on the basis of clinical characteristics of the ulcer such as the characteristic pretibial location, painful nature, protuberant lip and necrotic slough. Swabs from the edge and base of the acute ulcer will show a mixed growth of bacteria with predominance of Fusobacteria on Geimsa and Gram stain. A drop of fluid aspirated from the floor of the ulcer when examined under dark-ground illumination will show the presence of spirochaetes measuring 7–18 microns with loose spirals. Culture is done on special anaerobic media such as brain heart infusion (BHI) agar plates and other supplemented anaerobic culture media. A recently developed genus-specific polymerase chain reaction (PCR) assay can be employed for the detection of the genus Fusobacterium from clinical specimens and further confirmation of the species is established with the help of colonial morphology, staining characteristics, biochemical tests and chromatographic testing.

The histopathology is not diagnostic. Examination from the edge of the ulcer shows a variable degree of hyperkeratosis. The acute stage (up to 4 weeks) shows coagulation necrosis which is covered with a pseudomembrane comprising fibrin, necrotic cells and leucocytes. Spongiosis, dermal oedema and an acute inflammatory infiltrate consisting predominantly of polymorphonuclear cells and some eosinophils and lymphocytes extending throughout the dermis also characterize the acute ulcers. Both T and B lymphocytes are present in the infiltrate. Pigment incontinence is seen. Proliferation of the dermal blood vessels, thickening of the blood vessel wall and endothelial proliferation are seen in older ulcers. Vasculitis is absent. Older ulcers also show elongation of rete ridges and pronounced epidermal thickening and fibrosis. Deeper structures may be seen depending on the depth of involvement. Slough which covers the ulcer may show remnants of stratum corneum. Bacteria (Gram-negative or -positive cocci) are visualized in some of the sections of the epidermis. Dieterle stained sections may demonstrate spirochaetes in the epidermal slough. The presence of bacteria and spirochaetes in the dermis can be demonstrated by electron microscopy, but this is not routinely used [27].

Microbiological evaluation helps establish the diagnosis but on certain occasions the diagnosis may be confused with other ulcerative conditions that are common in the tropics (Box 66.2). Ecthyma is a common ulcerative pyoderma encountered in the tropics and presents as multiple, superficial crusted ulcers over the lower limbs and is caused by streptococci. Chocolate-coloured, tightly adherent crusts are a classic finding.