Eosinophilic pustular folliculitis (Fig. 36.2) is characterized by recurrent crops of intensely pruritic annular or polycyclic plaques, composed of coalescing, sterile papulopustules on the seborrhoeic areas of the face, trunk and extremities. There is a tendency for central healing with peripheral extension. Scalp involvement is present in only 6% of adult patients [37]. This classic form has been reported in older children and adolescents [4,29,31,33,37–45] rarely.

Fig. 36.2 Eosinophilic pustular folliculitis: (a) on the scalp; (b) face; (c) trunk; and (d) limbs. Note the sparing of the skin creases. 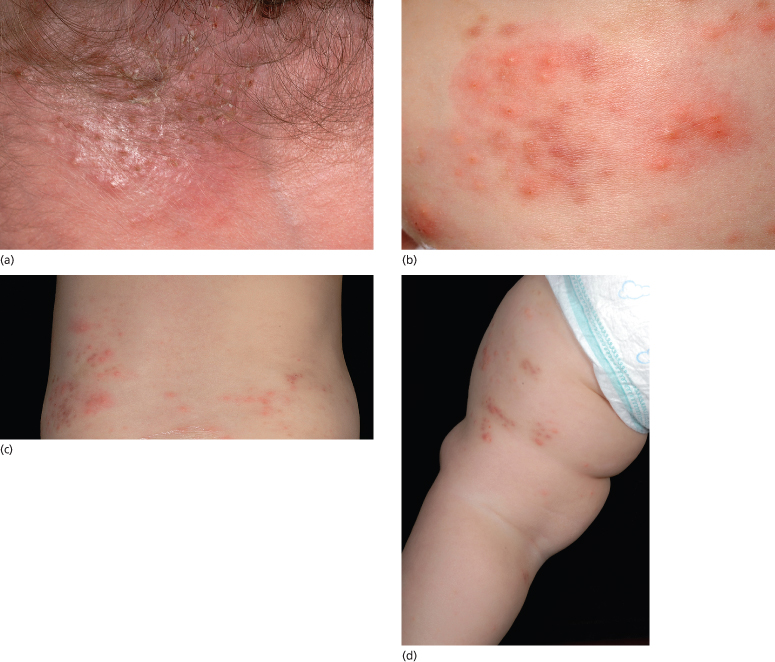 Eosinophilic pustular folliculitis in infancy appears to be a variant of this disorder, which principally involves the scalp [3–15,32,35]. These lesions, similar to those in the adult form, occur as grouped, pruritic firm papules (occasionally vesicles), which evolve into follicular pustules, measuring pinpoint to 3 mm, on an erythematous base. The lesions can present as a solitary plaque or as scattered pustules throughout the scalp [20]. Unlike the adult and childhood forms, annular or serpiginous plaques are not observed in infants and small children. They resolve spontaneously without scarring after evolving through a yellow, crusted phase in approximately 5–10 days, often leaving a 3–4 mm hyperpigmented macule. New crops of lesions appear approximately every 2–8 weeks. In addition to the scalp, the majority of infants have involvement of the extremities, hands, feet and trunk. The face [4,16,33], groin [6] and genitals [4] may be affected. Mucosal involvement was noted in one 7-year-old child [40]. In the infantile variant, onset is most likely in the first 6 months of life, with approximately one-quarter presenting at or just after birth [10,11]. Spontaneous resolution occurs mostly between 4 and 36 months. It appears that the earlier the disorder appears, the less chronic it becomes. Although there does not seem to be a familial predisposition, eosinophilic pustular folliculitis has been reported in two brothers, born at different times, both with onset in the neonatal period [32].

In all age groups there is peripheral eosinophilia and leucocytosis associated with exacerbations and an absence of systemic symptoms. Both classic and infantile forms exhibit a strong male predominance; however, in the 4–9 year age group, which represents by far the smallest cohort, girls have been reported more often. The clinical characteristics of eosinophilic pustular folliculitis in this age group fall between the other groups in that scalp involvement is unusual, seborrhoeic areas are less involved than in the classic form and there are fewer annular and more diffuse lesions as seen in the infantile form [37].

A Wright’s-stained smear of pustular contents demonstrating abundant eosinophils may be helpful in making the diagnosis. The diagnosis is based on the clinical presentation, associated haematological abnormalities and histological evidence of eosinophilic folliculitis.

Because of the rarity of this disorder, there have been no controlled clinical trials for the treatment of eosinophilic pustular folliculitis in adults or children. In addition, its recurrent and self-limited features, especially in infants, make evaluation of anecdotal treatments difficult. Antihistamines are indicated for associated pruritus and there may be a role for the eosinophil antimigration drugs such as cetirizine dihydrochloride [6,47]. The H2-antagonist cimetidine was used with success in a 9-month-old girl [48]. Although not consistently effective, most have found that mid- to high-potency topical steroids reduce pruritus and hasten involution of the lesions in infants [3,16,33], with response usually within 1–2 days of application. Topical calcineurin inhibitors have been successfully used in adolescents and adults [49]. Dapsone, at a dose of 2 mg/kg per day, was effective in one infant who was unresponsive to topical steroids; however, it was discontinued secondary to haematological side-effects. The eruption recurred after the dapsone was stopped [32]. Responses to oral antibiotics (penicillin G, erythromycin, cephalexin) have been variable [3,15,16,33].

In adults, it has been suggested that non-steroidal anti-inflammatory agents such as indometacin and naproxen are the agents of choice [16,50]. In patients with HIV-associated disease, there is generally a good response to antiretroviral therapy but eosinophilic pustular folliculitis can occur with immune reconstitution. Other treatment options include topical and systemic steroids, isotretinoin, diphenylsulphone, sulphamethoxazole, oxyphenbutazone, minocycline, doxycycline, metronidazole, itraconazole, cyproheptadine, colchicine, glycyrrhizin, interferon-α2b, interferon-γ and ciclosporin. Topical permethrim 5% cream, transdermal nicotine patches and, for the acquired immunodeficiency syndrome (AIDS)-associated variety, phototherapy (PUVA (psoralens and ultraviolet A) and narrow band) may be successful [33,51]. Radiation was helpful in a recalcitrant case [52].

12 Ziemer M, Boer A. Eosinophilic pustular folliculitis in infancy: not a distinctive inflammatory disease of the skin. Am J Dermatopathol 2005;27:443–55.

Recent advances in cytogenetics, immunology and molecular biology have led to the classification of primary eosinophilia as clonal, reactive and idiopathic [1]. Secondary hypereosinophilia is common in allergic disorders, parasitosis and in association with bullous pemphigoid, Churg–Strauss syndrome, scabies and drug eruptions.

The majority of genetically defined eosinophilic diseases with recurrent molecular abnormalities result in constitutively activated fusion tyrosine kinases, the phenotypic consequence of which is an eosinophilia-associated myeloid disorder. Most notable among these is the recent discovery of the cryptic FIP1L1-PDGFRA gene fusion in karyotypically normal patients, defining these diseases as clonal eosinophilias. Rearrangements involving PDGFRA and PDGFRB in eosinophilic chronic myeloproliferative disorders, and of fibroblast growth factor receptor 1 (FGFR1) in the 8p11 stem cell myeloproliferative syndrome, constitute additional examples of specific genetic alterations linked to clonal eosinophilia [2,3].

Hypereosinophilic syndrome is a multisystem disease with a high mortality rate. Chusid and co-workers [4] formulated a definition with strict criteria for the diagnosis of HES as follows.

It is still not clear whether eosinophils or their precursors themselves are abnormal in HES, or whether there is a problem in the regulatory mechanism of eosinophil production. The striking male preponderance (9:1) also remains unexplained. The mean age at onset is 37 years and the disorder is distinctly rare in childhood [20–23]. It is an important syndrome to recognize as eosinophilic infiltration of the cardiac tissue induces fibrosis and resultant restrictive cardiomyopathy. In the series reported by Alfaham, 16 of the 18 children had cardiac involvement and, untreated, this carries a high mortality [20].