During the last trimester of gestation, the fetus is covered by a protective biofilm called vernix caseosa. It forms a mechanical ‘shield’ against maceration by amniotic fluid and bacterial infection. Vernix is composed mainly of water (80.5%), proteins and lipids (8–10%) (Fig. 3.1) [1,2]. These lipids are derived from two sources: wax esters formed in sebaceous glands [3] and epidermal barrier lipids derived from keratinocytes [2]. Vernix contains all major stratum corneum lipids, including ceramides [4], which are not synthesized by sebaceous glands. Similar to postnatal skin, sebum and epidermal lipids apparently mix within vernix in order to provide on the fetal skin surface what has been referred to as the skin surface lipid film [5]. Interestingly, the lipid composition of vernix closely resembles that found in fetal skin [2]. Unlike postnatal skin, sebum and keratinocytes are not shed in the fetal period but adhere to the skin; accumulation of vernix might thus compensate for the relative lack of barrier lipids in fetal skin. Application of vernix to normal adult skin has been shown to increase surface hydration [6]. Shedding of vernix towards the end of gestation coincides with maturation of the transepidermal barrier.

The epidermis protects against evaporation, percutaneous absorption of toxic substances, physical damage and microbial infection. These properties depend largely on the thickness and barrier lipid content of the epidermis, both of which are directly related to gestational age [1,2]. As shown in Fig. 3.2, the number of epidermal cell layers and, from about the beginning of the third trimester, the thickness of the stratum corneum increase progessively with age. The most important lipids required for barrier function (i.e. ceramides, cholesterol and free fatty acids) are synthesized in the lamellar bodies within the granular layer. There is a patterned succession of epidermal expression of mRNA and of enzymes involved in lipid synthesis preceding the formation of an effective epidermal barrier [3,4]. Among the most important factors regulating the sequence of epidermal differentiation and stratum corneum formation is the peroxisome proliferator-activated receptor-α (PPAR-α). PPARs are expressed abundantly in early fetal epidermis; they regulate the activity of key enzymes required for barrier ontogenesis (e.g. β-glucocerebrosidase and steroid sulphatase) [4,5]. Similar to what happens in maturation of the lung, glucocorticoids, thyroid hormones and oestrogens accelerate barrier formation, while androgens retard it [4]. Initiation of skin barrier formation in the human fetus starts at around 20–24 weeks’ gestation [6]. The process of keratinization reveals an interesting temporal and spatial pattern, starting at and spreading from distinct epidermal initiation sites such as forehead, palms and soles [6,7]. 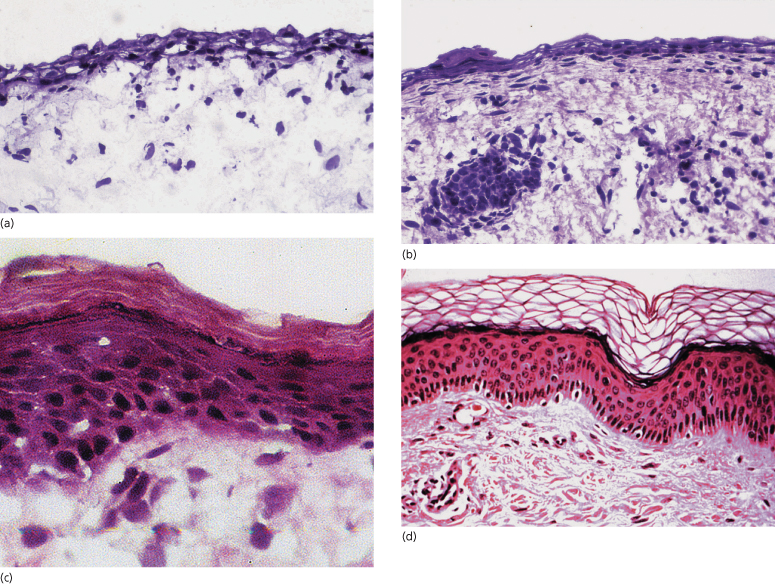 The intactness of the epidermal barrier can be assessed by measuring the transepidermal water loss (TEWL). The TEWL is proportional to the vapour pressure gradient measured with an evaporimeter [8,9]. It is influenced by gestational age, site and ambient humidity [8–10]. In term neonates, the TEWL ranges from 4 to 8 g/m2/h. This is slightly lower than in adults [11] owing to the fact that eccrine sweating is low or absent in the newborn infant. In the premature infant, TEWL is inversely proportional to gestational age (Fig. 3.3). In very immature infants (24–26 weeks’ gestation), it can be as high as 100 g/m2/h, which means that these infants, if left in a dry atmosphere, could lose 20–50% of their body weight within 24 h. This degree of TEWL would rapidly lead to hypernatraemia, polyglobulia and hypothermia, resulting eventually in intracranial haemorrhage and death. As TEWL represents passive diffusion of water along a water vapour gradient, it can be prevented by raising the ambient humidity. It is now common practice to humidify incubators for premature babies, particularly those of less than 32 weeks’ gestation [12]. Humidity needs to be as high as 80–90% within the first days in order to prevent heat and fluid loss. Prevention of hypothermia and TEWL can also be ascertained by using polyethylene caps or wraps immediately after delivery [13]. In underdeveloped countries where incubators are not readily available, postnatal topical emollient therapy with sunflower seed oil or mineral oils (petrolatum) has been shown to significantly reduce mortality rates in premature infants [14]. 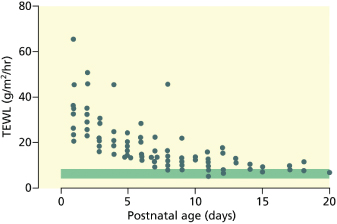 There is a striking regional variability on the skin surface regarding TEWL; it is usually highest through the abdominal skin, where maturation of the epidermal barrier occurs latest [6,7]. Preterm infants nursed under a radiant heater exhibit higher rates of evaporation because the level of ambient water vapour is lower [15]. It is likewise increased (by 20%) during phototherapy, even if relative humidity and ambient temperature are tightly controlled; this is probably caused by increased dermal blood flow during phototherapy [16,17]. Maintenance fluid intake of preterm infants should therefore be adequately increased during phototherapy. Neonatal epidermis can easily be hurt (e.g. by removal of plastic adhesives), which induces a measurable disruption of the skin barrier function [18].