17 Iatrogenic Disorders of the Newborn

As with amniocentesis, the main complication is pregnancy loss, which is about 2% [20]. There have been reports of an increased incidence of cutaneous haemangiomas in infants exposed to CVS antenatally. In one study, the reported incidence was 21%, which was three times higher than the incidence in the general population. It was found that the incidence of cutaneous haemangiomas, defined as strawberry birth marks, was significantly higher after CVS compared with second-trimester amniocentesis. This increased incidence was largely confined to patients who underwent a transcervical CVS procedure [21]. The mechanism by which haemangiomas develop in the general population is not understood and it would therefore be difficult to explain the above findings.

Other procedures that may leave scars or needle marks on the skin of the newborn include:

Continuous fetal heart rate monitoring is indicated during labour to monitor fetuses at risk of hypoxia [22]. This is achieved by using an ultrasonic transducer placed on the maternal abdominal wall or by using an electrode attached to the fetal scalp (Fig. 17.2). The latter method may produce bleeding at various levels in the scalp, including perforation of the periosteum and subperiosteal haemorrhage. Whenever fetal heart rate monitoring is being employed, it is vital that fetal acid–base status can be established from a scalp blood sample. A falling blood pH level indicates an impending problem and that action aimed at delivering the mother will probably be necessary. Scalp blood samples are obtained by performing a small incision in the scalp using the instrument shown in Figure 17.3. These injuries are a potential site of serious neonatal infection, which may be acquired during delivery. Persistent scalp bleeding due to fetal coagulopathy following fetal blood sampling has been reported [23]. Scalp gonococcal abscess following intrapartum fetal monitoring is another rare complication [24]. 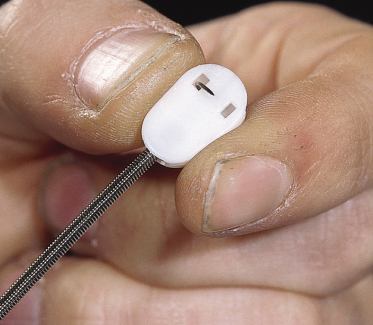 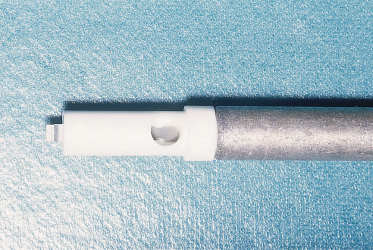 During labour, a caput succedaneum may develop. This is defined as soft tissue oedema and bruising of the presenting part. The swelling looks uncomfortable when it involves the breech and scrotum and very unpleasant in a face presentation. The bruising normally clears spontaneously in a few days. No specific treatment is needed but if there is extensive bruising, early phototherapy for hyperbilirubinaemia may be indicated.

A cephalhaematoma (Fig. 17.4) is a subperiosteal haematoma that produces a lump over the scalp limited by the cranial sutures. Swelling is usually not visible until several hours after birth, since subperiosteal bleeding is a slow process. It is of little importance, although it may be many months before it finally disappears. The swelling may begin to calcify by the end of the second week and a few may remain for years as bony protrusions. No treatment is required, although phototherapy may be necessary for jaundice. 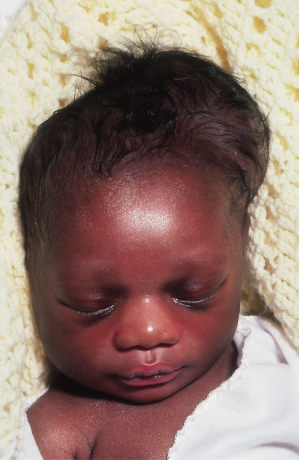 Rarely, a bleed may occur under the aponeurosis (subaponeurotic haemorrhage); the bleeding is not confined to a single cranial bone like a cephalhaematoma but spreads rapidly over the head and down towards the eyes. A significant fraction of the blood volume may be lost into this haematoma.

Bruising may be seen after manipulative deliveries and often in preterm infants. Vaginal breech deliveries also predispose to bleeding into the muscles of the legs and buttocks resulting from hypoxic capillary damage and increased hydrostatic pressure in the fetal dependent parts while awaiting delivery of the head [25].

In addition to the above, forceps deliveries may also cause erythema, abrasions, ecchymosis and subcutaneous fat necrosis of facial or scalp soft tissues. Their location depends on the area of application of the forceps. Moreover, in circumstances in which there is reduced area of contact, there is a predisposition to slipping of the forceps, which can result in visible facial and cranial markings [26]. Bruising of the skin after a forceps delivery may be so extensive as to produce anaemia or jaundice.

Delivery by the vacuum extractor (ventouse) is occasionally used instead of forceps when there is slow progress of labour. The vacuum is created using either a metal or a soft (plastic or silastic) cup applied onto the scalp and the baby is extracted by traction on the handle (Fig. 17.5). When air is evacuated from the cup, the scalp is sucked into the space inside the cup, so producing the chignon, which has a greater diameter above the rim than the rim itself (Fig. 17.6). Apart from producing jaundice, the chignon is a benign lesion in the majority of cases and it heals over a few days leaving no scars, but rarely it becomes lacerated and infected. Neonates delivered by vacuum have a higher incidence of cephalhaematomas [27]. 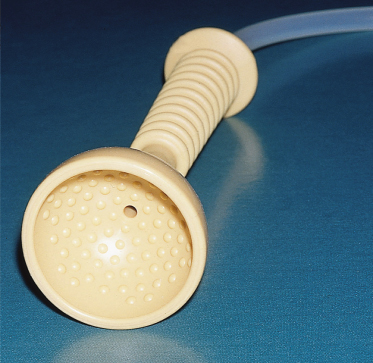 Fig. 17.6 (a) Severe skin trauma and chignon following ventouse extraction. The ventouse is more usually applied over the vertex. (b) Later appearance of the lesion.

Abrasions to the scalp may also occur as a result of rotation or movement of the cap on the skin, caused by a badly placed cap. Sudden detachment of the cap can also cause skin damage. Ventouse extraction (vacuum extraction) can be used only for cephalic presentations and is contraindicated in preterm deliveries before 34 weeks’ gestation because of a significant incidence of complications [28]. Alopecia is a rare but important complication of ventouse deliveries [29].

Scalpel lacerations during caesarean section may be deep enough to require suturing and may occasionally become infected.