Ichthyosiform erythroderma presents at or soon after birth and can range from mild patchy involvement to severe generalized ichthyosiform erythroderma. The severe cases usually persist as generalized erythroderma (Fig. 124.2), whereas milder cases often evolve into characteristic ichthyosis linearis circumflexia (ILC) (Fig. 124.3) on the trunk and limbs after 1–2 years [10,56,57,60]. Ichthyosis linearis circumflexia may be episodic, with flares lasting up to 2–3 weeks and then clearing for weeks and months at a time [57]. Patients with predominantly ILC have normal physical development in general, whereas those with persistent generalized erythroderma have a more severe course, with failure to thrive and life-threatening events occurring in early childhood [10,56,57]. Skin erosions with peeling of the skin, itchiness and redness can give rise to the misdiagnosis of peeling skin syndrome [10,61]. There is a tendency for spontaneous improvement of the skin with the transition from generalized erythroderma to patchy or episodic involvement. Despite the improvement, some patients remain severely affected with a fluctuating course throughout childhood and adulthood [57]. 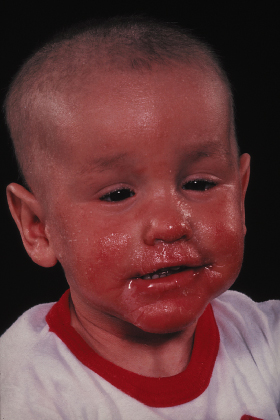 Fig 124.3 Ichthyosis linearis circumflexia: erythematous, serpiginous and migratory plaques that have a characteristic double-edged scale at the margin of the erythema. 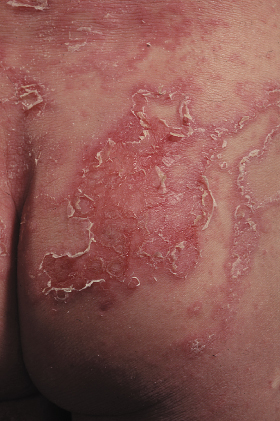 Pruritus is a common feature in Netherton syndrome, causing irritability especially in infancy [7,57]. Other skin manifestations include lichenification similar to that seen in AD [11,57]. The palms and soles are normally spared but may appear hyperkeratotic [62]. Although the nails are usually unaffected, nail dystrophy, pterygia and loss of several fingernails have been reported [57].

Papillomatous skin lesions can present at various sites such as the groin, axillae and genitoanal regions [63–65]. Squamous cell carcinoma has also been reported on the dorsum of the hand, the upper arm and the vulva [66–68]. Krasagakis and colleagues [69] reported a case of early aggressive cutaneous neoplasia in an area of papillomatous lesions on sun-exposed skin, and suggested that the underlying genetic defect may be the cause of the malignancy in these patients. Weber and colleagues [65] suggested that the non-melanoma skin cancer in Netherton syndrome patients might be associated with EV-HPV (epidermodysplasia verruciformis-associated human papillomavirus)-type infection, similar to that seen in immunosuppressed transplant recipients.

Hair growth is often sparse and delayed in Netherton syndrome patients. Individual hairs are short, dry, lustreless and brittle, growing a few centimetres before breaking and displaying a characteristic spiky appearance (Fig. 124.4) [57,70]. The hair abnormalities can affect all parts of the body, including scalp, eyebrow, eyelashes and body hair. The type of abnormalities seen include trichorrhexis invaginata, trichorrhexis nodosa and pili torti [3,4,70]. Trichorrhexis nodosa and pili torti can feature in various other medical conditions and syndromes ranging from hypothyroidism [71], Menkes hair disease [72], ectodermal dysplasia [73], mitochondrial disorders [74] to argininosuccinic aciduria [75]. 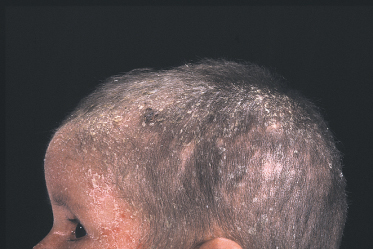 Trichorrhexis invaginata, on the other hand, is considered to be pathognomonic for Netherton syndrome [60]. Trichorrhexis invaginata can be identified on light microscopy but is best demonstrated on electron microscopy. It is a ball-and-socket hair shaft deformity caused by the invagination of the distal hair shaft into the cup formed by the proximal hair shaft (Fig. 124.5) [4]. In trichorrhexis invaginata, the invagination occurs at the site of a transient keratinizing defect of the hair cortex resulting from incomplete conversion of sulphydryl groups into the disulphide bonds in the protein of the cortical fibres. The incomplete conversion means fewer cross-linkages of the keratin structures, thus resulting in a weak architectural structure of the cortical cells. This defect leads to cortical softness, which, when driven upwards by growing, is forced to fold around the more stable distal hair shaft forming the typical trichorrhexis invaginata deformity [70,76,77]. Trichorrhexis invaginata has been reported to be present in an 11-day-old infant [78] but is usually not obvious in early infancy. It may also be difficult to detect given the sparsity of hair in patients with Netherton syndrome, making it difficult to obtain adequate samples. Even when hairs are examined microscopically, not all of them will have the obvious abnormality required to make the diagnosis. Hair microscopy often has to be repeated on several occasions over a period of time before the diagnosis is made [79]. In some instances, only the proximal half of the invaginate node is seen under electron microscopy, representing the golf tee sign, which may be the only clue to the diagnosis of trichorrhexis invaginata [79]. Powell and colleagues [80] described an increased density of trichorrhexis invaginata in eyebrow hair compared with scalp hair (about 10 times) in patients with Netherton syndrome. Hence examination of both the eyebrow and scalp hair will increase the chances of making a positive diagnosis. In some cases of Netherton syndrome only vellus [81] or eyebrow hairs [5,76,82,83] are abnormal. Improvement of hair growth can occur during childhood [83,84] but although it may approach a normal-looking appearance the hair never returns completely to normal [36]. There is currently no known treatment for trichorrhexis invaginata. If there is significant hair loss, a wig may be considered.

Fig 124.5 Trichorrhexis invaginata: a ball-and-socket hair shaft deformity caused by the invagination of the distal hair shaft into the cup formed by the proximal hair shaft, pathognomonic for Netherton syndrome. 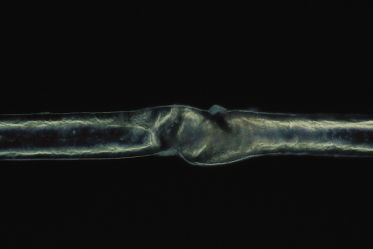 Pili torti and trichorrhexis nodosa are the two other most common hair abnormalities in Netherton syndrome. Trichorrhexis nodosa is a disorder of the hair shaft in which there is a distinctive response to injury. The hair is fragile and on examination regularly spaced pale node-like swellings are observed [84]. It may affect normal hair following injury or occur after minimal trauma in cases of inherent defects in keratin synthesis, leading to abnormally brittle hair. When the cuticle of the hair is absent, the hair cortex is exposed and its integrity is broken down. The hair can then split and fray into strands at the point of the break. Trichorrhexis nodosa may be localized or generalized to all hair [85,86]. Pili torti is the twisting of the hair fibre at focal points along its length. The hair cuticle is still intact but the twisting creates stress in the fibre, causing longitudinal fractures in the cuticle and internal hair cortex. This results in weak points in the hair fibre, which subsequently break [87,88].

Atopy is a feature of all patients with Netherton syndrome [57,62]. Atopic dermatitis, asthma, urticaria, angioedema and allergic rhinitis occur in some form or other in patients with Netherton syndrome [7,57,62,89]. A positive family history of atopy is also frequently observed [57]. Some patients may even have concomitant presentation of several atopic features. Reaction to food allergens, particularly nuts, egg and milk, is common [9,62,86]. In some cases, the patients may have a delayed response as seen in atopic dermatitis [5,90,91] but more often anaphylactoid-type reactions with angioedema occur [7,57]. Positive skin tests or radioallergosorbent test (RAST) responses to allergens such as house dust mite, grass pollen and cat dander are frequent [9,57]. Peripheral eosinophilia is present in the blood and the IgE level is high, ranging from 400 to 15,000 IU/mL [9,57,62,83,92,93].

Recurrent cutaneous, sinus and chest infections are frequent in Netherton syndrome patients [7,57]. It has been suggested that the recurrent infections are due to an underlying immunodeficiency [10,66,94]. Greene and Muller [9] reported that 12 out of the 45 patients they reviewed had recurrent infections, with six having decreased serum IgG levels. Judge and colleagues [57] in 1994 reported that two Netherton syndrome patients had decreased IgG2 subclasses, and two others who did not show clinically significant viral infections also had a reduced number of natural killer cells. However, most patients with Netherton syndrome have normal immunoglobulins apart from a high level of IgE.

Stryk and colleagues [95] reported selective antibody deficiency to bacterial polysaccharide antigens in three of their patients with Netherton syndrome, who had recurrent sinopulmonary infections. The study emphasized the importance of checking for functional antibody response to both protein and bacterial polysaccharide, and not simply relying on IgG subclass levels alone. In these patients, prophylactic antibody can usually control the rate of infection [96], but in some patients intravenous immunoglobulin therapy may be required to prevent infections. Serial immunological evaluation is important as the deficient antibody response may simply represent maturation delay.

Severe recurrent or chronic skin infections suffered by patients with Netherton syndrome include: bacterial infections such as Staphylococcus aureus, including methicillin-resistant S. aureus; Candida albicans and viral infections (herpes simplex and human papillomavirus) [10,97]. Other infections such as conjunctivitis, otitis media and bacterial vaginosis [98] have also been reported [57,57,59,99]. Gross and colleagues [100] documented a case of vaccine-associated poliomyelitis. Some of these infections can lead to severe sepsis and in some cases life-threatening septicaemia, especially in early childhood, accounting for the high mortality rate seen in this age group [7,59,101]. Recently, Renner and colleagues [23] carried out an extensive immunological study in patients with Netherton syndrome and revealed reduced memory B-cells and defective response to vaccination with Pneumovax and bacteriophage phiX174. They also reported that patients with Netherton syndrome had a skewed T-helper 1 (Th1) phenotype, elevated proinflammatory cytokine levels – interleukin 1β (IL-1β), IL-12, tumour necrosis factor α (TNF-α), granulocyte-macrophage colony-stimulating factor (GM-CSF), IL-1 receptor antagonist – and decreased natural killer (NK) cell cytotoxicity although the absolute numbers of NK cells were normal or elevated in patients.

Failure to thrive is a major problem especially in the first year of life. This is attributed to a combination of a high catabolic rate and a defective skin barrier, leading to fluid loss and increased susceptibility to recurrent infections [57]. These children usually have chronic diarrhoea and malabsorption, which further exacerbates the failure to thrive. Jejunal biopsy has revealed villous atrophy in a significant proportion of patients: three out of five in the report by Pradeaux and colleagues [102] and 26% in the series by Bitoun and colleagues [7]. The high frequency of villous atrophy suggests that a gut biopsy should be considered in Netherton syndrome. Nutritional support is a significant part of management from an early stage in order to maintain adequate growth and development. For most patients a hypoallergenic diet is advised, and for infants, especially those with diarrhoea and failure to thrive, Neocate®, an amino acid-based formula milk substitute, is recommended. The input of a dietitian is essential.

By the second year of life most children show an improved weight gain, but some degree of growth retardation persists and those who are most severely affected in early infancy remain below the 25th centile [6,54,55,57,82,103]. Greig and Wishart [103] reviewed the growth of 34 patients with Netherton syndrome and found 12 to be less than third percentile and two less than tenth percentile. Short stature is a characteristic of Netherton syndrome.

Neurodevelopment is usually normal in Netherton syndrome. Mild mental retardation has been reported in a minority of patients and may be a consequence of neonatal events, such as cerebral haemorrhage following hypernatraemic dehydration [57,62,104].

Hypernatraemic dehydration and hypothermia are major causes of neonatal morbidity and mortality in Netherton syndrome [7,9,55,105]. These features are a consequence of the markedly increased transepidermal water loss [9,55] resulting from the impaired skin permeability barrier [51]. Intermittent aminoaciduria has been reported in Netherton syndrome patients, although no related specific renal problem has been identified [9].

Other features that have been described in patients with Netherton syndrome are: hydroureter; hypoplastic left heart; atresia of the pulmonary artery; hemihypertrophy; and acute bilateral renal thrombosis [6,55,106–108].

Confirming the diagnosis of Netherton syndrome is often difficult in early infancy, in a baby who is usually very unwell with erythroderma and profound failure to thrive. The main important differential diagnosis is Omenn syndrome, but in practice a frequent misdiagnosis is atopic dermatitis. In this situation a significant clue is the lack of response to topical steroids, and indeed this is one situation that can rapidly lead to steroid toxicity and cushingoid features.