Keratosis pilaris is characterized by the presence of rough, follicular papules and varying degrees of erythema. Erythema may be particularly severe in children with extensive facial involvement (keratosis pilaris rubra faciei). A number of diseases are associated with keratosis pilaris (Box 123.1) [11–13,23–26].

Monilethrix is characterized by beaded hair shafts that break easily (see Chapter 148). The hair is often unremarkable at birth and becomes abnormal during the first year of life. Follicular hyperkeratosis is seen on the neck and occipital scalp. The eyebrows may also be affected [27]. Genetic mutations have been described in the trichocyte and epithelial keratin gene cluster on 12q11-q13 [28]. For those with autosomal recessive hypotrichosis, mutations have also been identified in desomoglein 4 [29,30].

Lichen spinulosa or keratosis spinulosa is characterized by grouped follicular papules with keratotic spines in nummular patches, on the trunk and extremities. Boys are most often affected, and the disorder usually disappears at puberty [31]. There are no known associations with syndromes or systemic diseases. 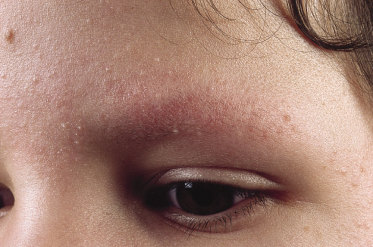 Atrophoderma vermiculata is characterized by symmetrical reticulate atrophy and scarring of the cheeks. Small pits with sharp edges give the skin a ‘worm-eaten’ appearance. Lesions are always limited to the face, and begin after the age of 5 years. Asymmetrical forms limited to one cheek have been described [35].

Keratosis follicularis spinulosa decalvans (KFSD) is a rare X-linked disease that affects both the skin (Fig. 123.3) and the eyes (Fig. 123.4). It is characterized by follicular hyperkeratosis of the skin and corneal dystrophy. Several families have been described, the largest one being of German-Dutch origin [9,14,15]. The follicular papules are associated with loss of hair, especially of the scalp, eyebrows and eyelashes. Marked photophobia may result from the corneal dystrophy. Other prominent findings are scarring alopecia of the scalp and absence of the eyebrows and eyelashes. X-linked KFSD lacks severe inflammation. In our study of the largest known pedigree, hyperkeratosis of the knees (Fig. 123.5) and calcaneal region of the soles was noted, together with a high cuticle on the nails (Fig. 123.6) [9]. 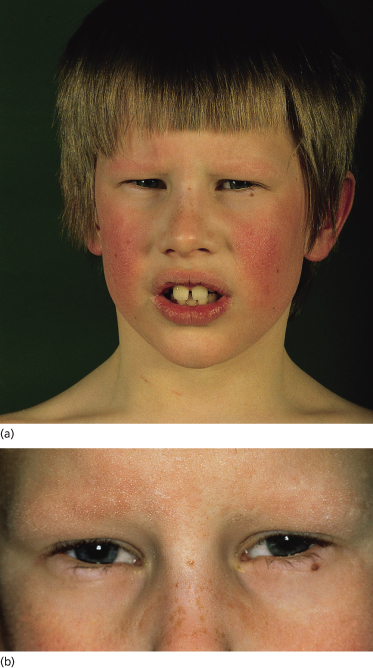 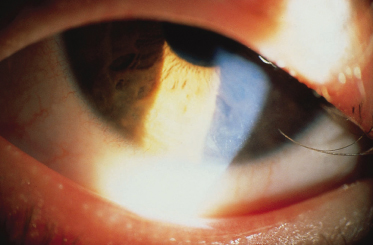