Acquired vaginal defects are most commonly the result of oncologic resections.

Current approaches to reconstruction of these defects most commonly involves local or regional flaps if primary closure is not an option.

Flap selection based on defect type is described (Table 14.1).

A cautious approach to postoperative management, as well as careful adjustment of patient expectations, is critical in the care of these patients.

Acquired vaginal defects most commonly result from the resection of pelvic malignant neoplasms. Advanced colorectal carcinomas frequently involve the posterior bladder wall. Carcinoma of the bladder may extend into the anterior vaginal wall. Primary tumors of the vaginal wall may result in any number of vaginal defects. Local extension or recurrence of uterine or cervical malignant neoplasms can necessitate pelvic exenteration and total vaginal resection. Trauma or burns to the vaginal area may also result in vaginal distortion; however the relatively protected position of the vagina makes these deformities much less common.

Irrespective of their etiology, vaginal defects may range from a small mucosal defect to total circumferential loss. In addition, tumor ablation may necessitate the resection of vulvar and perineal tissue, further complicating the reconstruction. Although reconstruction is usually performed at the time of the oncologic resection, delayed procedures are not uncommon. In these delayed cases, scarring and soft-tissue contracture may add to the technical difficulty of the reconstruction.

APRs are performed for very low rectal tumors. In this procedure, the entire rectum, anal canal, and anus are removed, and a permanent colostomy is created. Perineal wound complications such as delayed healing and infection are common in these patients, especially those who have undergone irradiation. Major wound complications have been reported in 14–41% of patients following APR when defects have been closed primarily.1 When APR was first described in 1908, the perineal wound was left open and allowed to heal by secondary intention.2 This approach led to serious morbidity associated with delayed wound healing, and was subsequently replaced by primary closure with suction drains and then delayed reconstruction. This approach was also problematic, especially for irradiated wounds as the wounds broke down commonly and delayed reconstruction was difficult. Today, immediate local or regional flaps are the most common approach to managing these large APR defects.

Pelvic exenteration may be required when rectal cancers have invaded adjacent structures such as the uterus or bladder. In these cases, a partial or total vaginectomy is often necessary.

When pelvic exenteration was first performed in the 1940s, the operative mortality was greater than 20%.3 Today, perioperative mortality is 3–5%.4,5 The historical approach to these defects is similar to that of the APR defect: wounds left open to heal by secondary intention, or primary closure over drains with delayed reconstruction if the wound broke down. Today, many pelvic exenteration defects are immediately reconstructed using flaps. Despite the change in approach to these defects, there remains significant morbidity in more than 50% of patients.4 Even with immediate flap reconstruction to improve vascularity and to decrease dead space, infection may occur in 9–11%, and delayed wound healing in up to 46%. Other significant complications include intestinal adhesions, fistulas, and pelvic herniation.6

The close anatomic relationship between the bladder, vagina, and rectum needs to be well appreciated by the reconstructive surgeon. Ligamentous support of these organs is interrelated, and surgical dissection of any one structure may lead to prolapse and herniation of the remaining components. In addition, pelvic exenteration may disrupt or devascularize the pelvic floor musculature. The pelvic sidewalls define a fixed anatomic space that, once cleared of the pelvic organs, will either delineate a dead space or invite small-bowel prolapse and adhesions.

The vagina is essentially a distensible cylindrical pouch (Fig. 14.1). Normal length is 6–7.5 cm along its anterior wall and 9 cm along the posterior wall.7 It is constricted at the introitus, dilated in the middle, and narrowed near its uterine extremity. In its normal anatomic position, the vagina tilts posteriorly as it extends up into the pelvis, forming a 90° angle with the uterus. Careful orientation of the neovagina is important to successful reconstruction and ultimate sexual function. The introitus is a frequent site of contracture after reconstruction, and any distortion of its normal position relative to other structures such as the urethral orifice, perineal body, and anus should be addressed. If no resection of the external vulva and perineum is required, great care must be taken to avoid their distortion because this may also have an impact on sexual function and body image. 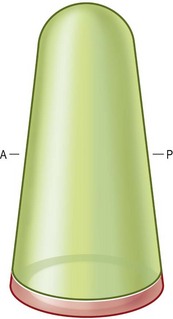 The classification of acquired vaginal defects is based on their anatomic location (Fig. 14.2). This classification will help to guide reconstructive efforts. There are two basic types of vaginal defect: partial (type I), and circumferential (type II). These basic types can be further subclassified. Type IA defects are partial, and involve the anterior or lateral wall. These defects may result from the resection of urinary tract malignant neoplasms or primary malignant neoplasms of the vaginal wall. Type IB defects are partial, and involve the posterior wall. These defects, which tend to be the most common type of vaginal defect requiring reconstruction, result primarily from extension of colorectal carcinomas. Type IIA defects are circumferential defects involving the upper two-thirds of the vagina. These defects are typically the result of uterine and cervical diseases. Type IIB defects are circumferential, total vaginal defects that are commonly the result of pelvic exenteration. These defects result in considerable soft-tissue loss, dead space, as well as distortion of the introitus. 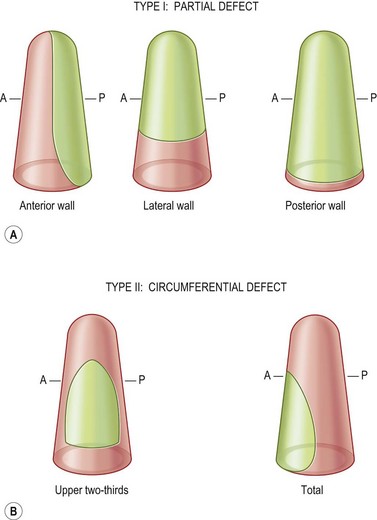 Fig. 14.2 (A, B) Classification system of acquired vaginal defects. (A) Type I: partial defect; (B) type II: circumferential defect. A, anterior; P, posterior.

Successful management of patients undergoing vaginal reconstruction is dependent upon a multidisciplinary approach. The oncologic and reconstructive surgeons need to communicate well in terms of both the expected defect and the reconstructive options that are available to that specific patient. The anesthesia team needs to be well advised of the nature of the procedure and the hemodynamic stress that can be expected intraoperatively. Also, early involvement of a psychiatrist and a sex therapist may be warranted.

The radiation oncologist is an important participant in the overall treatment plan. Many patients have had previous radiotherapy, and many other patients may be receiving intraoperative radiotherapy or placement of a brachytherapy cannula. The radiotherapy plan has important implications for the choice of flap as both the recipient and donor sites can be affected by radiation injury. In addition, the medical oncologist should be involved with the decision-making as many patients may receive pre- and postoperative chemotherapy. Surgical procedures should be timed to minimize the effects of chemotherapy on wound healing, as well as to avoid unnecessary delays in starting chemotherapy protocols.

Most important to the success of the reconstruction is the full and informed involvement of the patient and her family. It is important to be specific about the goals of vaginal reconstruction with patients, which include effective wound healing and restoration of body image and sexual function8 (Box 14.1). For those women motivated to preserve sexual function, a comprehensive program of sexual rehabilitation may be warranted. Ratliff et al. investigated sexual adjustment after vaginal reconstruction with gracilis myocutaneous flaps and found that, although 70% of patients were judged to have a physically adequate vagina, fewer than 50% resumed sexual activity.9 Absence of pleasure (37%), problems with vaginal dryness (32%), excess secretions (27%), self-consciousness about ostomies (40%), and self-consciousness about nudity in front of their partner (30%) were the most considerable concerns. Preoperative and postoperative counseling, in addition to postoperative rehabilitation strategies (vaginal dilators, lubricants, topical estrogens), have been suggested as the best way to influence these outcomes positively and give patients the best hope of functional and psychological recovery.8,10 The psychologist and sex therapist should be an integral part of the ablative-reconstructive team. In addition, at most tertiary care institutions, specialized nursing teams can help the patient and her family prepare for the psychological distress that they may experience.

The major goals of vaginal reconstruction

• To restore the pelvic floor, preventing herniation and small-bowel fistula

There are five basic goals in vaginal reconstruction (Box 14.1). Selection of the optimal reconstructive method to achieve these goals is based on the type of defect and the characteristics of the patient. Small defects that can be closed without tension will ideally be closed primarily. In the case of the irradiated wound, however, one must proceed cautiously with primary closure. Rarely is skin grafting alone an adequate alternative in oncology patients.

Proceeding along the reconstructive ladder, regional flaps continue to be the most frequently used and effective procedures. Many flaps have been described, none of which is ideal for all defect types (Table 14.1).11–17