Rhinoplasty is one the of most exacting procedures in aesthetic surgery. While the analysis and planning involved in the operation are keys to obtain a good result, the actual technique used depends on the surgeon’s preference since many different techniques can produce similar outcomes. As this is one of the most difficult operations to learn, most surgeons gravitate to the techniques they have learned during their training.

The open approach to rhinoplasty has gained popularity in the past two decades. While the traditional closed technique tends to be a fast and efficient method for addressing certain anatomic nasal deformities (particularly those requiring reduction procedures) the open approach offers distinct advantages in terms of visualization and control. Grafts are more accurately secured and suture techniques often obviate the need for grafting all together. The open approach is ideal for the correction of the under projected tip and the severely deviated nose. In revisional nasal surgery, the open technique is desirable since it allows for full visualization of the problematic anatomy.

• Motivation. It is important to have patients verbalize their desires regarding potential changes in their nasal appearance. In order to have a satisfactory outcome, such requests have to be realistic, attainable, and in harmony with the patient’s overall facial features.

• Psychological. If the surgeon and a patient both agree that a cosmetic deformity exists, and have the same goal for an outcome, it is generally safe to consider a rhinoplasty. Avoid patients who are bothered by deformities that one cannot appreciate, or who are disproportionately bothered by minor deformities. Do not discount the opinions of your office staff, as some patients appear perfectly reasonable in the presence of the physician and remarkably change character when dealing with the staff.

• Anatomic. In addition to visually inspecting the nose for variables such as size, projection, length, dorsal height, and tip configuration, it is very important to palpate the nose. Palpation allows the evaluation of the length of nasal bones, the character of the middle vault, and the quality of tip support. If the nasal bones are short or the middle vault feels weak and narrow on pinching, one should consider the use of spreader grafts. If pressure on the tip reveals poor recoil, tip projection may be deficient thus, necessitating enhancement.

• Functional. It is rather embarrassing to have patients begin complaining of breathing problems only after a cosmetic rhinoplasty. All patients should have an intranasal examination to look for potential troublesome anatomy such as septal deviations, turbinate hypertrophy, and internal and external nasal valve narrowing.

• Photographs. A good set of standardized photographs are mandatory for documentation purposes as well as surgical planning. Views include: Full-face frontal, oblique, profile, smiling profile, and worm’s-eye view. Re-assess your analysis of the face and nose while looking at the pictures.

Most surgeons have their favorite way of “opening” the nose. We will present ours, as we feel it is expeditious, safe, and easy to perform. The procedure is performed under general anesthesia, typically using an LMA. Four milliliters of 4% cocaine are used to moisten two strips of approximately 18 inches of 1-inch plain nu-gauze. The gauze is wrung out and placed in each naris. Lidocaine (2% with 1 : 100,000 epinephrine) is then infiltrated across the dorsum, columella, and sidewalls for a total volume of 4 mL. The vibrissae are trimmed and the face is then prepped.

A Chevron or V-shaped incision is designed on the columella, either where it contacts the lip, or at its narrowest portion (Fig. 38.3A1). The V-shaped incision at the base is preferable when the columella is short. With a 15 blade, the incision is made through the dermis, carried just inside the vestibule, then directed towards the tip for a distance of approximately 10 mm bilaterally. Using Converse scissors, blind subcutaneous dissection is performed connecting both vestibular rim incisions, taking care not to injure the inferior border of the medial crura (Fig. 38.3A2). The columellar incision is finalized by connecting these planes. The columellar flap is then elevated quickly, and the medial crura immediately visualized. From this point on, scissor dissection is guided by following the lower border of the lower lateral crura. A Converse alar retractor distracts the flap, while your assistant provides downward counter-traction on the medial crura with a single hook (Fig. 38.3A3). Dissection should stay on the cartilage to avoid interfering with the blood supply of the skin flap. When both lateral crura are visualized, the domes are distracted inferiorly with a double hook in order to provide the necessary counter traction and allow undermining of the dorsal flap. Undermining is started by first dividing the suspensory ligaments, which attach the skin to the underlying domal area. Then the correct dissection plane is identified by finding the bluish color of the dorsal septum (Fig. 38.3A4). Once the bony dorsum is reached, a Joseph elevator is used to complete the dissection, making sure that the attachments of the upper lateral cartilages to the nasal bones laterally are not violated. 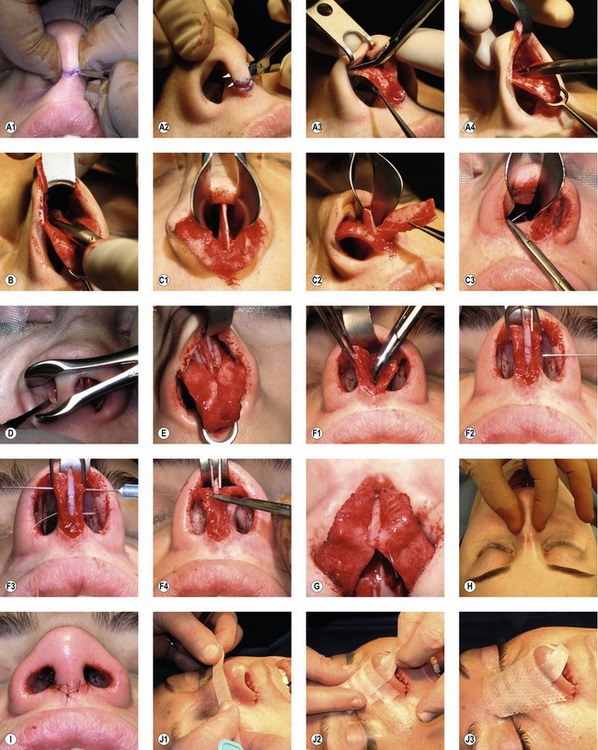