A.  Structures are derived from

1.  Female differentiation is the default.

a.  Perineal artery to perineum and scrotum.

a.  Posterior: Proximal to the bulb (prostatic and membranous portions).

A.  Goals of reconstruction

3.  Ability to spontaneously void standing up. 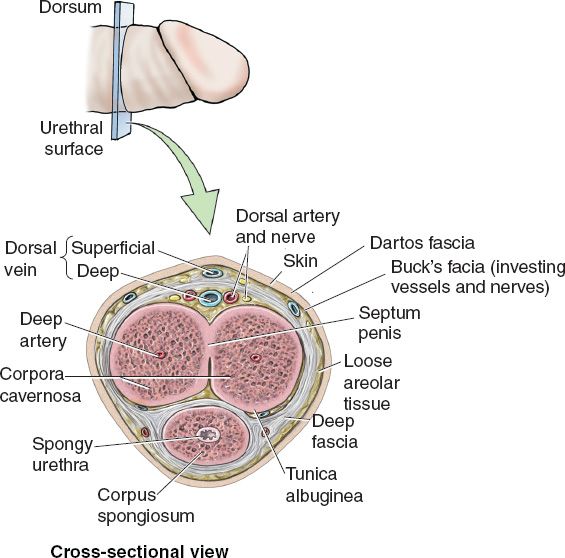 B.  Defects of penile surface

1.  Can occur due to SCC of shaft, glans, or traumatic injury

2.  Plication procedure: Circumcising incision with degloving of shaft. Tunica albuginea opposite area of maximal curvature is identified and an ellipse excised. This will slightly shorten the penis but correct curvature.

i.  Implant prosthesis if impotent.

a.  10% to 15% rate of impotence post-op: Venous leak phenomenon versus psychogenic.

9.  Dressings must be supportive, Foley × 2 to 3 weeks to prevent urethral stricture.

A.  Fournier’s gangrene: Necrotizing fasciitis of the perineum

1.  Higher incidence in immunosuppressed and those with diabetes.

3.  Fournier’s gangrene is a surgical emergency. Mechanical debridement is necessary to control infection.

5.  Scrotal defect—STSG over testes which are sutured together in midline, meshed graft. Medial thigh pockets are a temporary option as higher temperature will alter sperm production.

A.  Patients s/p XRT have high risk of delayed wound healing and fistulas.

3.  Bilateral gracilis: Myocutaneous, or muscle only flaps with primary closure over the flap or STSG.

2.  Adequate transverse dimension of introitus and pouch for intercourse.

g.  Associated with rib and vertebral anomalies, 25% to 50% with renal duplications, agenesis, and ectopy.

i.  Child bearing is possible with surrogate and in vitro fertilization.

j.  Timing of procedure—14 to 20 years old, start with dilation.

i.  Serial dilation: Motivated patients are successful, requires daily dilation either with manual dilators or with manufactured seats.

a)  Blind pouch dissected between urethra and rectum, STSG harvested and placed over obturator.

b)  Obturator removed at 7 days and dilation started at 14 days.

d)  PAP smears recommended in future to monitor for graft conversion to SCC.

iii.  Sadove & Horton: FTSG into dissected blind pouch, advantage over STSG is that it may grow with patient if she is still young.

a)  Based on terminal branches of internal pudendal a. (posterior labial a.)

d)  Not typically performed as it alters external anatomy in young patients.

C.  Acquired absence of the vulva

1.  Most commonly secondary to resection of SCC or melanoma.

b.  Small skin territory is OK for unilateral vulva reconstruction.

D.  Acquired absence of the vagina

1.  Most commonly result of resection of urologic, gynecologic, and GI malignancies.

2.  Prior radiation therapy is indication for flap at the time of resection.

3.  Be cautious using abdominal-based flaps when patient has diverting ostomy.

4.  Try to avoid circumferential incision at introitus—will stricture with time.

i.  Skin paddle can provide epidermis for perineum and posterior vaginal wall.

ii.  Rolled VRAM can reconstruct circumferential vaginal defect and is the treatment of choice for total absence of the vagina.

iii.  Based on deep inferior epigastric artery and vein.

ii.  Based on descending branch of lateral femoral circumflex.

i.  Minimal donor site morbidity but with temperamental skin paddle, may require STSG.

e.  Singapore (pudendal thigh) flaps (Fig. 53-5): May be difficult to contour if patient is previously radiated. 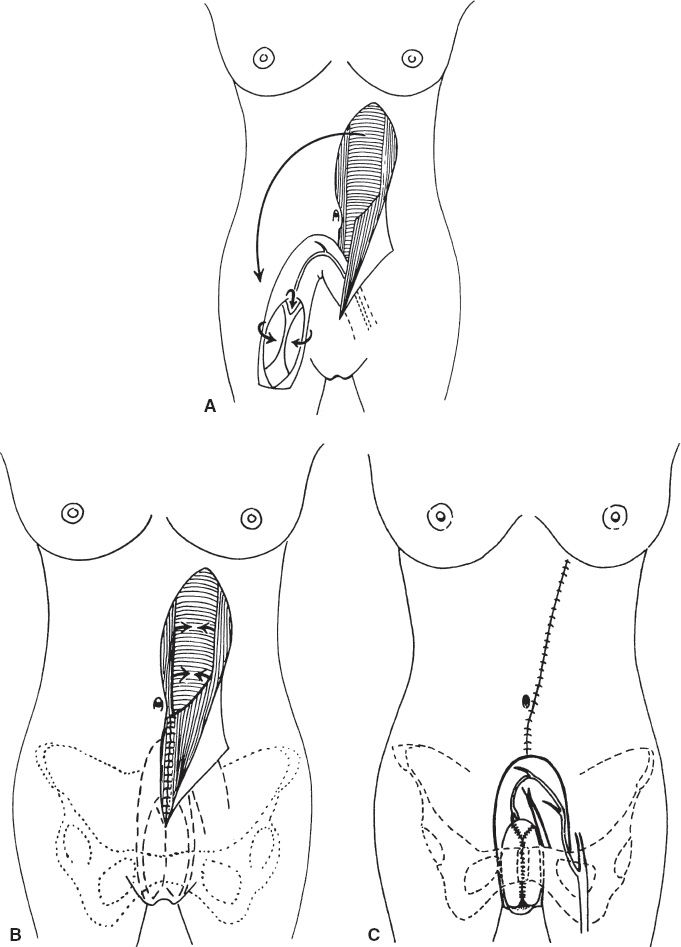 Figure 53-2. VRAM flap A: The flap is harvested from the abdomen and turned down into the pelvis on its pedicle. B: The abdominal fascia is repaired. C: The flap is inset at the recipient site. (From Fischer JF, ed. Mastery of Surgery. 6th ed. Philadelphia, PA: Lippincott Williams & Wilkins; 2012.)

A.  Patients must have formal diagnosis of Gender Identity Disorder (DSM-5 criteria).

B.  Multidisciplinary approach is best to provide best comprehensive care for patients.

D.  This is the one instance when the operative plastic surgeon is not competent to decide who is ready for surgery. 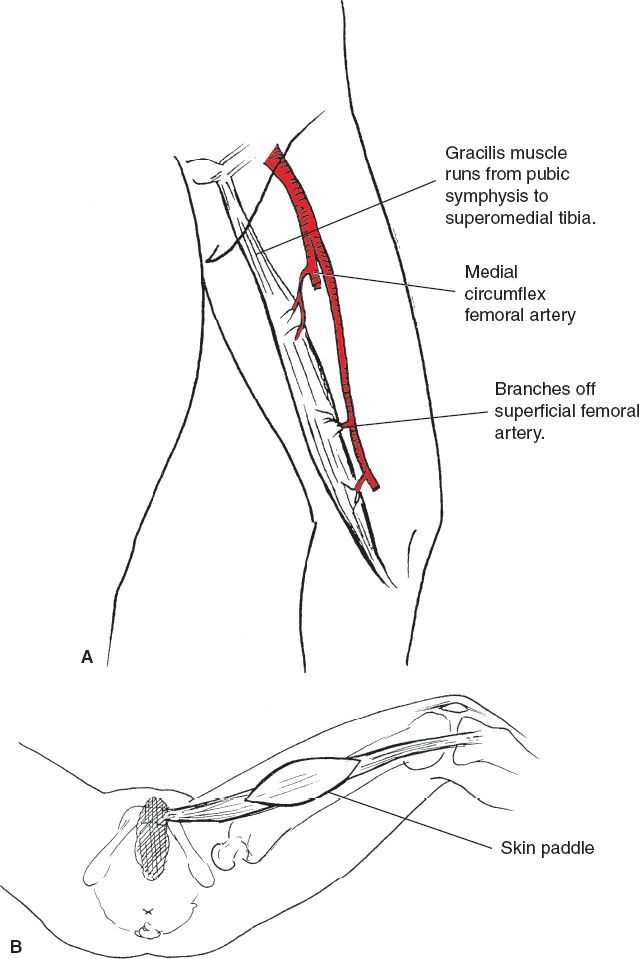 E.  *Patients must meet WPATH criteria prior to OR 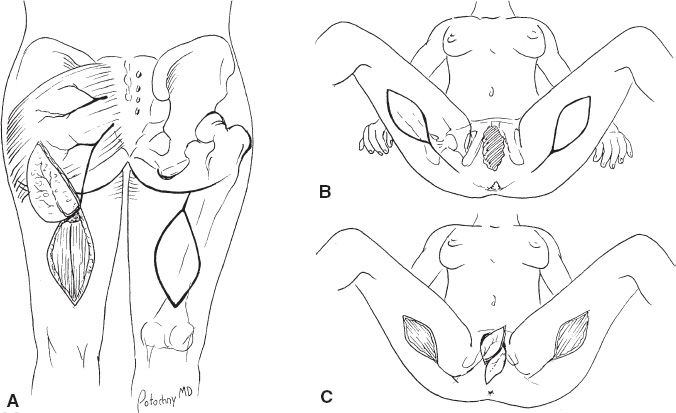 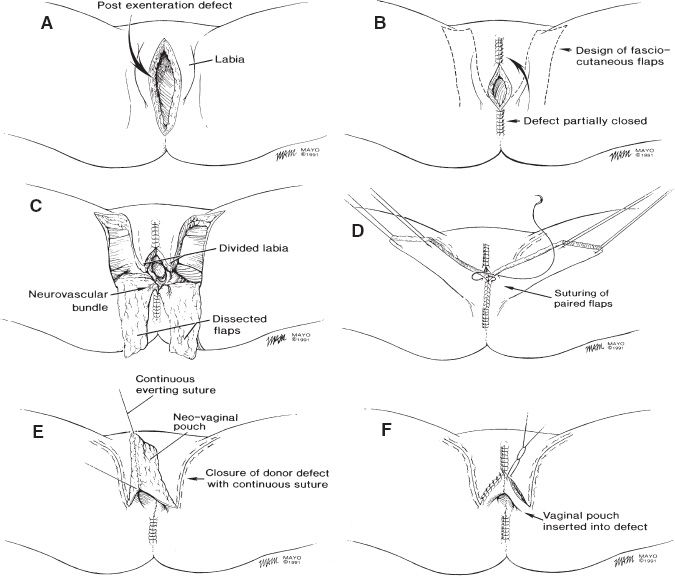 b.  Limited liposuction and periareolar resection of glandular tissue is an option in small-breasted patients.

i.  Penile substitution with clitoral enlargement and urethral transfer.

v.  Caudally based, pedicled musculomucosal flap raised from anterior vaginal wall, must reach beyond tip of clitoris with width 3 cm, this will serve as lining of fixed perineal aspect of neourethra.

a)  Must perform and document normal Allen test, nondominant arm.

c)  China technique of “roll in a roll” to use skin of forearm to construct neourethra and outer phallus.

f)  Inflatable hydrolic prosthesis for erectile function is possible, we do not perform these at our institution given risk of wound breakdown and extrusion.

iv.  Recipient site is saphenous vein and femoral artery in groin or DIEA and SIEV in lower abdomen.

i.  Blunt dissection of perineal canal between prostate and rectum.

1.  In patients who require an ostomy be cautious about using VRAM flaps. Abdominal wall integrity is important to prevent parastomal hernias.

2.  Beware of local tissue rearrangement or Singapore flaps to close a previously irradiated perineum. These tissues will have also been irradiated. The tissues may be difficult to move into defect and will have a high rate of delayed wound healing and breakdown.

3.  Patients must meet WPATH criteria prior to Gender Reassignment Surgery.

4.  Gender patients are best cared for in a multidisciplinary team setting with professionals that regularly treat these patients

1.  What is the path of the pedicled ALT in perineum reconstruction?

The flap must be tunneled under the rectus femoris and sartorius muscles.

2.  Where are your ALT flap perforators of the descending branch of lateral femoral circumflex artery?

Located within 3 cm of midpoint on axis from anterior superior iliac spine to lateral aspect of patella.

3.  What is unique about the blood supply to the penis?

The glans and the shaft have separate blood supplies. The skin of the shaft is supplied by a dermal plexus while the dorsal artery supplies the glans. This allows these structures to remain viable after they are divided to create vaginal lining and neoclitoris in gender reassignment surgery.

4.  Describe the layers of the penis.