Analysis. Analyze the problem in thirds.

Endpoint. Know what normal looks like, so you know your surgical endpoint.

Do not be destructive. Do not do anything to the ear that cannot be reversed.

Skin is precious but weak. Preserve skin in the sulcus and do not rely on skin tension to maintain ear position.

Asymmetry. In asymmetric cases, operate on both ears most of the time.

Facelifts are otoplasties. Do not deform the tragus, lobule or sulcus.

The term “otoplasty” refers to surgical changes in the shape or position of the ear. The most common indication is the patient with prominent, but normally shaped, ears. In this situation, otoplasty is an enormously rewarding procedure for the surgeon and the patient/family, because good results and satisfied patients can be expected in most cases. In addition, the technical maneuvers required are among the simplest in all of plastic surgery.

The complexity of the otoplasty procedure increases as the deformity of the ear increases. If correction of prominent ears is at one end of the otoplasty spectrum, then reconstruction of congenital microtia with rib cartilage grafts is at the other. Surgical reshaping of the ears, or otoplasty, is best conceptualized with the whole spectrum of ear deformities in mind; that way, the surgeon will avoid the pitfall of learning a single recipe and attempting to apply it in every situation.

The single most important exercise for the surgeon, before performing any procedure in the otoplasty spectrum, is to have the characteristics of a normal ear firmly in his/her mind. With proper choice of technique, the surgeon can usually avoid the uncorrectable problems of over-correction and unnatural contours.1

The history of otoplasty techniques is instructive but misleading. Understandably, the original techniques focused on changing the shape of the auricle, rather than on the nuances of aesthetics, the stage we are in today. In the author’s opinion, most classical otoplasty techniques, although essential in the evolution of the craft, are unnecessarily destructive to the ear, overly complicated in design, and excessively prone to over-correction, complications, and unnatural appearance results.

The current trend is toward less destructive methods of auricular reshaping, preservation of the retroauricular skin and concentration on natural, nonsurgical appearing results. The ultimate example of this phenomenon is neonatal, nonsurgical molding of the auricle, which can correct many of the deformities for which an otoplasty might later be recommended.5 Any surgical decision represents a trade-off and this author’s approach is no exception. The approach described in this chapter incorporates the bias that under-correction, recurrence and suture complications are preferable to over-correction, unnatural contours, sharp edges and unrepairable deformities.

The cause of ear deformities is not known. Some articles in the literature suggest that ear deformities are the result of absent or misplaced muscles around the ear. Some newborn children have extremely soft, pliable ears. When these children have prominent ears and they lie on their sides, the ears tend to fold forward against the cheek, rather than back against the head, tending to make them more prominent as the years go on.

The overall size and shape of the ear is evaluated to determine if the ear is prominent with an otherwise normal size and configuration, or if there are abnormalities in addition to the prominence. Excessively large ears, Stahl’s ears, cryptotia, underdeveloped shell-like helical rims, postoperative deformities, cauliflower ears, elongated lobules or earring-related or facelift-related deformities are noted.

The upper third of the ear is evaluated to determine if it is prominent, if the antihelix/superior crus of the triangular fossa is well formed and if the helical rim is well defined.

The lobule is evaluated to determine if it is prominent. It is important to note that even if the lobule is not particularly prominent on initial examination, it may be excessively prominent once the upper two-thirds of the ear have been corrected intraoperatively.

Asymmetry is noted, mostly because patients and families will always comment on it. In asymmetric cases it is usually preferable to operate on both ears rather than attempt to set back only the prominent ear to match its less prominent counterpart (Fig. 22.1). 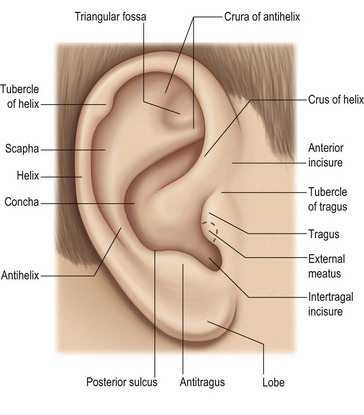 Fig. 22.1 Anatomical structures of the ear. The tubercle of the helix is synonymous with Darwinian’s tubercle

Since otoplasty is perhaps the only cosmetic procedure that can be performed in childhood, additional considerations come into play. The fact that parents and grandparents may be involved in surgical decision making for a patient who cannot yet express himself or herself alters the doctor–patient relationship.

The degree of prominence/deformity and the age at presentation will determine when a surgical recommendation is made. For young children with very prominent ears and whose parents desire early correction, otoplasty is recommended as early as age 4 years. While there may be situations when earlier intervention is warranted, it is reasonable to view the age of 4 years as a minimum for most otoplasty procedures and its variations. In situations where the entire ears require reconstruction, as in microtia, this author prefers to follow the recommendations of Firmin6 and wait until approximately the age of 10 years.

In other cases, the parents may want the child to participate in the decision process and that will necessitate later intervention. General anesthesia or deep sedation by an anesthesiologist is usually required up until the early teenage years, especially in boys. Occasionally, there are girls who are mature enough to request and tolerate the procedure under local anesthesia without an anesthesiologist, but this is rare. It is also common to have patients present at approximately 18 years of age, when they are legally independent, or later when they have earned the money for the procedure. Finally, it is not unusual for adults at almost any age to request correction, either because they have wanted it all their lives or because their desire to, e.g., have a facelift, has led to the realization that their ears are also prominent.

Families frequently ask about the effect of early surgical treatment on growth of the ears. For whatever reason, this has never been an issue in this author’s experience. For one thing, there is a large variation in acceptable ear size. It has also never been shown that an otoplasty retards auricular growth. Finally, many prominent ears are on the large side and some growth retardation would be welcomed by the patient and/or the family (Fig. 22.2). 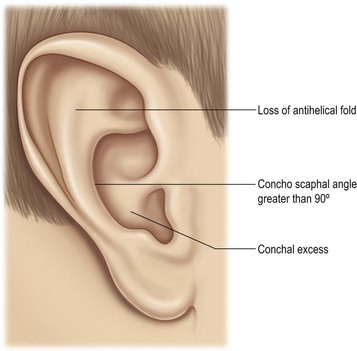 While the delicate, complex contours of the ear may be difficult to create de novo (i.e., microtia), anatomic considerations are minimal in standard otoplasty. There is abundant blood supply, making almost any combination of incisions acceptable without the risk of necrosis. There are no motor nerves in the neighborhood. The terminal branches of the great auricular nerve will always be injured but normal sensory function usually returns.

The incision is made in the retroauricular sulcus. In the upper third of the ear, the incision can be extended up on to the back of the ear to provide adequate exposure to place Mustarde sutures between the triangular fossa and scapha. While an incision placed higher, on the back of the ear, will make the dissection easier, this author prefers the depth of the sulcus where the ultimate scar will be better hidden.

No skin is excised, except a small triangle from the medial surface of the lobule (not the retrolobular skin), taking care to preserve enough tissue for a normal earlobe and retrolobular sulcus. This skin excision on the lobule is frequently necessary for repositioning of the lobule at the end of the procedure. The cartilage is exposed on the posterior (medial) surface of the ear and soft tissue is excised from deep to the concha. In the region of the earlobe, deep dissection is performed under the concha in preparation for lobule repositioning. Branches of the great auricular nerve will be seen and divided.

Mustarde concha-scapha and triangular fossa-scapha sutures are placed using 4-0 clear nylon sutures on an FS-2 needle.7 The number of sutures depends on the how far into the middle third of the ear the antihelical deficiency extends. In some cases the sutures will only be required in the upper third of the ear. In other cases, they will extend through the middle third as well. These sutures are placed in order to create a soft curvature to the antihelix and no attempt is made to correct the prominence of the ear at this point. The Mustarde sutures are not parallel to each other but, instead, are arranged like spokes on a wheel, all pointing toward the top of the tragus (center of the wheel). Care is taken to create a superior crus that curves anteriorly such that it terminates almost parallel to the inferior curs. If the superior crus is created such that it is a direct, cephalad extension of the antihelix (straight line), the result will appear unnatural and amateurish.

Fig. 22.3 Technique for the standard otoplasty. The combination of Mustarde sutures, conchal resection/closure and conchal-mastoid sutures is shown. (A) Suture placement. (B) Suture tightened and ties appropriately. (C) Position of sutures as shown from the surgeon’s vantage point.