Indications: Nasal osteotomies are indicated for narrowing wide lateral walls of the nose, closing an open roof deformity, or straightening the nasal bony framework in a deviated nose. Nasal osteotomies are frequently performed in rhinoplasty surgery. In fact, one study found that osteotomies were performed on over 95% of their patients (by comparison, a dorsal hump was removed on 84%).1 These maneuvers are challenging because they are not directly visualized and often lack the control that is present with other interventions. Once osteotomized, the small nasal bones are not fixed as are other bones but are splinted from above and below in order to maintain the desired intra-operative position. In order for the surgeon to maintain control of the osteotomized segments, the procedure must be completed in a meticulous manner.

Markings: Drawing the planned course of the osteotomy on the skin is often helpful since it may serve as a guide to follow with a finger palpating the tip of the osteotome. Remember that the low osteotomy does not begin in the nasal bone but rather on the maxilla. 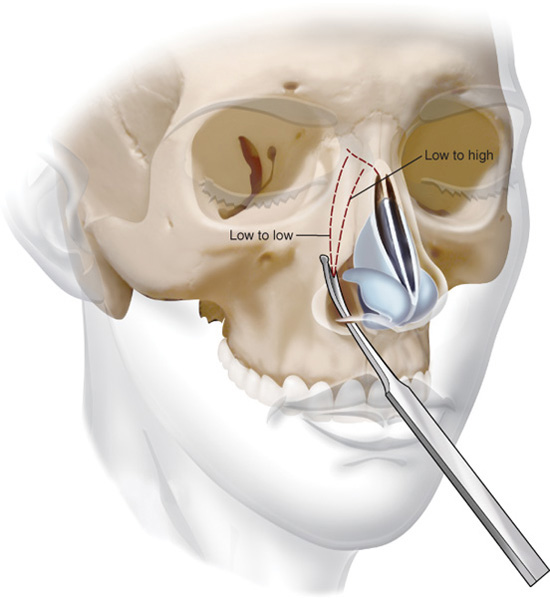 Figure 27-1. Nasal osteotome used to make one of two possible osteotomies. A high starting point on the piriform aperture may also be used.

A low-high osteotomy is used to correct a small open roof deformity or correct a medium-wide nasal base. Higher osteotomies may be preferable in the occasional patient with larger nasal bones to achieve better dorsal refinement (Figure 27-1).

Double level osteotomies: These are used when excessively convex lateral nasal walls are present or if lateral nasal deformities or asymmetries are present. Additionally, it can be useful in smoothing the transition from the cheek to the nasal sidewall when deformities exist.3 The double osteotomies consist of two parallel osteotomies: one low-low and another more medial (higher) on the nasal wall. The order is important since performing the more lateral osteotomy first leaves an unattached and unstable piece of bone to cut secondarily.

Medial osteotomies: A medial osteotomy separates the nasal bones from one another in the midline (Figure 27-2). It is recommended when the dorsal aspect of the nose needs to be narrowed in isolation or in conjunction with the base of the nose where lateral osteotomies would also be required. Other indications are male patients with thicker bone in the region of the radix or patients with deviation of the nasal root who require mobilization and repositioning the nasal pyramid. The medial osteotomy is initiated at the lateral edge of the open roof deformity or proceeds in a lateral direction if no open roof deformity is present. It proceeds in a supero-lateral direction 15 degrees off the midline where a natural cleavage plane exists for the osteotomy.4 This is easily marked on the patient as a line extending to a point halfway between the nasion and the medial canthus. The lateral nasal bone is then placed so that its superior edge gets tucked medially under the intact nasal bone. Any palpable edge can be smoothed with a rasp. If combined with a lateral osteotomy, it is important to leave about 2 mm to 5 mm of bone intact between the two superior ends of the osteotomies. The medial osteotomy with or without a lateral osteotomy is capable of narrowing the dorsum of the nose.5 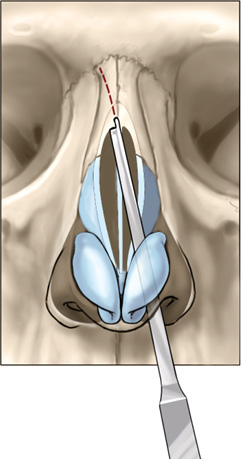 Approaches: There are several acceptable approaches for accessing the bony nasal vault for the purpose of performing a lateral nasal osteotomy: endonasal, percutaneous, and gingivobuccal. The surgeon should understand and be comfortable performing each even though he may have a preferred approach.