What is a flap?

Tissue that is either transferred or transplanted with intact circulation.

How are muscle flaps classified by Mathes and Nahai?

What is the average tissue survival rate for a microvascular free flap?

What type of ultrasonography will most reliably image and locate vascular perforators preoperatively?

What is most likely to improve the survival of the distal portion of a random pattern cutaneous flap?

Surgical delay prior to flap elevation.

What is the reexploration rate for flap compromise?

What is the salvage rate for microvascular free flaps that require reexploration for flap ischemia?

What is the maximum warm ischemia time tolerated by muscle flaps?

What is the maximum warm ischemia time tolerated by bone flaps?

What is the maximum warm ischemia time tolerated by skin and fasciocutaneous flaps?

What is the warm ischemia time tolerated by jejunal flaps?

How can the maximum tolerated ischemia time be increased?

Cooling of tissues: up to 12 hours of ischemia tolerated for fasciocutaneous tissues, 8 hours for muscle, and 24 hours for bone.

Which type of arteriotomy, slit or circular/oval, is more successful?

Under what circumstances might an end-to-side anastomosis be advantageous?

What anastomotic angles are thought to be the most desirable and result in the greatest amount of blood flow to the recipient vessel in an end-to-side anastomosis?

Based on technical factors and blood flow rates, angles of 45 to 90 degrees result in greater arterial flow than obtuse angles up to 135 degrees.

What is the reason for adventitial stripping?

To relieve vasospasm and to prevent loose adventitia from being caught in the vessel lumen, a potential trigger for thrombosis.

Which method of adventitial stripping is preferred, blunt or sharp?

Papaverine is an opium alkaloid antispasmodic drug used in the treatment of visceral spasm, vasospasm, and formerly in the treatment of erectile dysfunction. In microvascular surgery, it is applied topically to relieve vasospasm. The mechanism of action is not entirely clear, but it is believed to involve inhibition of the enzyme phosphodiesterase leading to increased levels of cyclic AMP, ultimately leading to vascular smooth muscle relaxation.

What are the characteristics of a viable flap?

What are signs of inadequate arterial flow?

What are signs of inadequate venous flow?

What are the most reliable methods of free flap monitoring?

Besides cost, what is the main disadvantage of using an implantable Doppler probe for free flap monitoring?

How is near-infrared spectroscopy used in free flap monitoring?

In near-infrared spectroscopy monitoring, free flap tissues are exposed to near-infrared light. For each type of tissue, a portion of this light is absorbed and some is reflected back. The detector senses the reflected light and the device uses the ratio of oxyhemoglobin (HgbO2) to deoxyhemoglobin (Hgb) to provide noninvasive real-time measurement of tissue oxygenation. Changes in tissue oxygenation suggest decreased blood flow to the flap and may be secondary to thrombosis of the vascular pedicle. There is some clinical evidence in the literature that a decrease in tissue oxygenation is detected prior to clinical signs that the flap is compromised and may facilitate early reoperation and higher flap salvage rates.

How can buried flaps, such as those used for pharyngeal reconstruction, be monitored?

A segment of the flap can be pedicled on separate perforating blood vessels and exteriorized. Alternately, an implantable Doppler can be placed on the vein or artery or both, distal to the anastomosis.

How long before a pseudointima forms at the anastomotic site?

How long before a new intima forms at the anastomotic site?

What types of sutures are typically used for microvascular surgery?

Nylon or polypropylene sutures ranging from 8-0 to 12-0.

How is the microvascular suture selected?

Describe the halving (or “0–180 degrees”) technique of microvascular anastomosis.

The halving technique is probably the most common method of suturing end-to-end anastomoses. The halving technique involves placing the first two sutures 180 degrees apart at 3 and 9 o’clock (or alternately at 6 and 12 o’clock) and adding the intervening sutures using the principle of halves (Fig. 73-1A). The advantage of this technique is that it makes it easy to visualize how to evenly space sutures, making it useful when there is a vessel size mismatch.

Figure 73-1  Halving (A), triangulation (B), and “back wall up” (C) suture placement techniques for microvascular anastomosis. Numbers indicated the order of suture placement.

The triangulation technique, first described by Alexis Carrel, involves placing the first three sutures 120 degrees apart (Fig. 73-1B). This technique decreases the risk of inadvertent inclusion of the opposite wall of the vessel during subsequent sutures placement by retraction of the three initial stay sutures.

Describe the “back wall up” technique of microvascular anastomosis.

The back wall up technique involves placing the first suture in the middle of the back wall and progressively suturing forward from this point on either side (Fig. 73-1C). It is used for vessels that are especially delicate or that cannot be rotated very much due to short length, but is technically more challenging to take even bites of both vessels so as not to end up with a discrepancy on the front wall.

In an end-to-end anastomosis, what is the maximum size discrepancy between vessels that can be accommodated?

What are some strategies for performing an anastomosis between vessels with a size mismatch?

Other than placing sutures farther apart on the larger vessel, strategies include beveling or spatulating the smaller vessel, partially closing or narrowing the larger vessel lumen with sutures, or using an interposition graft that is intermediate in diameter between the two vessels (Fig. 73-2). When the recipient vessel is larger, an end-to-side anastomosis into the recipient vessel can be performed. 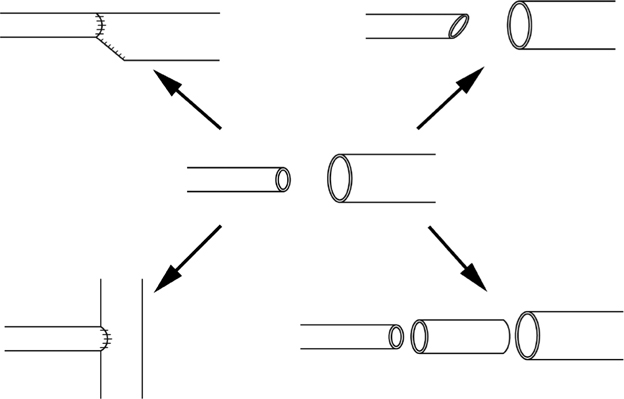 Figure 73-2  Strategies for dealing with a vessel size mismatch include narrowing the larger vessel with sutures, beveling the smaller vessel, using an interposition graft of intermediate diameter, and performing an end-to-side anastomosis when the recipient vessel is larger.

Supermicrosurgery is defined as the microsurgical anastomosis of vessels with a diameter of <0.8 mm.

What are the indications for supermicrosurgery?

Supermicrosurgical technique is used for lymphovenous bypass in the treatment of lymphedema as well as for free flap transfer based on perforator level microvascular anastomoses (perforator-to-perforator anastomoses).

Under what circumstances can microvascular coupling anastomotic devices generally be used?

Which has superior patency rates, coupled or hand-sewn anastomoses?

They are similar when used appropriately.

Can coupling devices be used on arteries?

Yes, but they generally do not work well on thick-walled or inelastic, atherosclerotic vessels.

What is the maximum closing pressure of vascular clips that should be used to minimize damage to vessels?

What are some key points when performing an anastomosis for preventing exposure of subendothelium and thereby inducing platelet aggregation?

Use small needles, avoid repeated needle punctures, equal placement of sutures, avoid tying sutures too loose or too tight, avoid use of too many sutures, which can cause endothelial slough.

How does heparin prevent coagulation?

Primarily by increasing the action of antithrombin-3, which inactivates thrombin. It also decreases platelet adhesion and inhibits the conversion of fibrinogen to fibrin.

What risks are associated with heparin use?

In addition to bleeding and hematoma formation, heparin can cause thrombocytopenia. Heparin-induced thrombocytopenia is thought to be caused by antibodies to the complex formed by heparin and platelet factor 4.

How does aspirin function to prevent platelet aggregation?

No. At low doses, aspirin selectively inhibits thromboxane A2, a platelet aggregator and vasoconstrictor. At high doses, prostaglandin I2, a vasodilator and inhibitor of platelet aggregation are also inhibited. For example, aspirin in doses of 81 and 325 mg has been shown to be more effective in preventing cerebrovascular accidents, myocardial infarction, and death after carotid endarterectomy than doses of 650 and 1,300 mg.